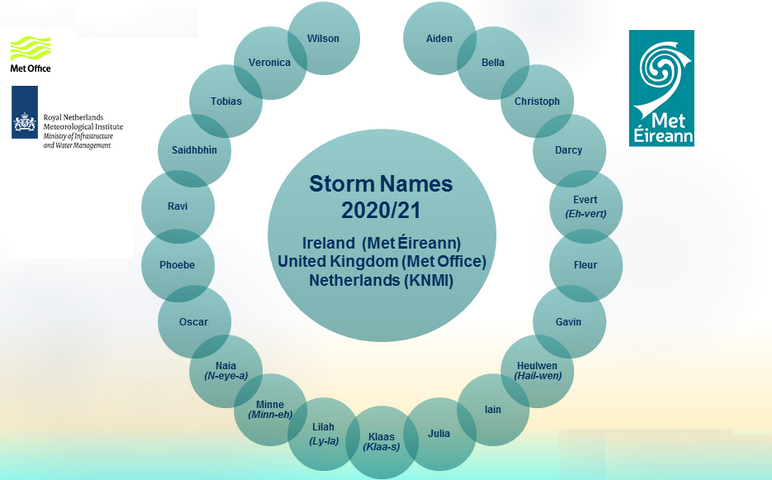 Yes, it is Season 6 of Name our Storms, #StormNames. A collaboration between national meteorological services to help highlight incoming severe weather and bring together the forecasts and warnings. Like it or if not so keen, they just keep on coming.

What was the ‘Name our Storms’ project, has helped raise awareness of the potential impacts of severe weather in Britain and Ireland also NW Europe before they hit for several years now. It’s identified this season as #StormNames.  An incoming low pressure or storm event could attract a name to highlight weather warnings and help the public adjust plans or businesses and services get prepared.

"...to provide a clear and consistent message to the public, encouraging people to take action to prevent harm to themselves or to their property at times of severe weather.” Evelyn Cusack, Head of Forecasting at Met Éireann

When is a storm named? This can sometimes be quite mysterious or frustrating, missing all the morning broadcasts when it is announced at 0930 but other times it clearly helps spotlight an upcoming bad weather event, sometimes several days in advance.

“If it has the potential to cause an amber/orange or red warning”. Met Eireann tends to issue Orange warnings more closely relating to distinct wind strengths or forecast rain amounts. The UK Met Office look at Likelihood and Impacts on their warning matrix to come up with a severity. It is not just about just windstorms but also heavy and prolonged rain and less often snowfall that could cause a low pressure to be named. The Environment Agencies already work with the UK Met Office when rain warnings are issued. Storm Desmond lasted for days as the rain just kept on coming although the original low had moved on and it will be flooding that event is remembered for. 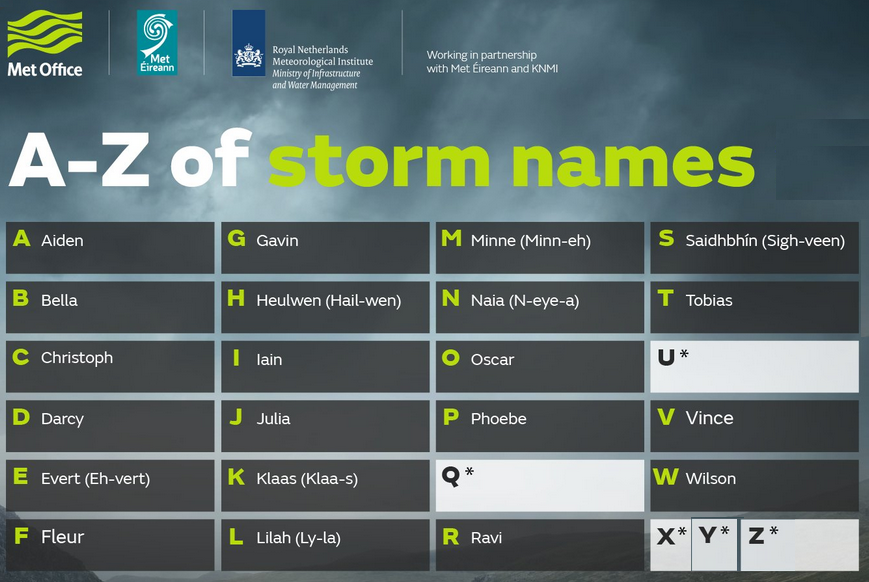 The list of names opens occasionally for more suggestions and these encompass all three nations. There is a SW Europe grouping of Spain/Portugal and France naming lows. AEMET, IPMA and Meteo France as well as the (NW) West Europe group.

However, if an ex-hurricane moves across the Atlantic Ocean and affects Europe as a post-tropical cyclone, it can keep its original name and we have seen that happen in recent years, most notably Ophelia, when the sky turned red.

If your name is on the list don’t get too excited if it is later in the alphabet, we have never got further than K for Storm Katie in March 2016, the first season when everyone was keen as mustard. Then only five, up to Storm Ewan Feb 2017, Storm Hector June 2018 and Storm Hannah in April 2019. Of course, August 2020 has bizarrely thrown up two named storms, Ellen (named by Met Eireann with a red wind warning) and Francis (named by UK Met Office with an amber wind warning and plenty more rain). KNMI, the Dutch Met Service didn’t get a look in last season with nil point on the naming scoreboard.

This is different from the Hurricane and Tropical Storm naming system for the Atlantic and Eastern Pacific although the letters Q, U, X, Y and Z aren’t used for this project either. These tropical cyclones become a named Storm once they reach a certain sustained wind speed, 39mph+. What might have worked well is a circular listing like the Central Pacific where there are four alphabetic lists that are worked right through to end and then start at top of next one, so Phoebe, Tobias and Wilson would get their name used. 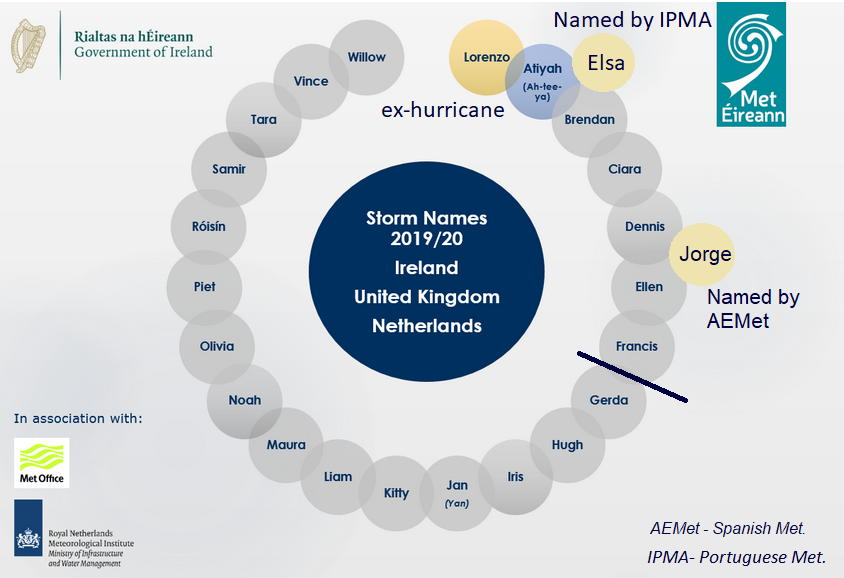 However, there were special entries in 2019/20 from the Portuguese Met service IPMA with Storm Elsa mid-December and the Spanish Met Service who slightly stretched their reach naming Storm Jorge at the end of February (which would have been Storm Ellen). And an ex-hurricane even before kick-off with Lorenzo in early October 2019

If you have opinions on this Storm Naming malarkey and want to share them, there is a whole discussion thread on the Netweather community forum. We'll wait to see how far along the list we get this season.

Your complete guide to Atlantic Hurricanes