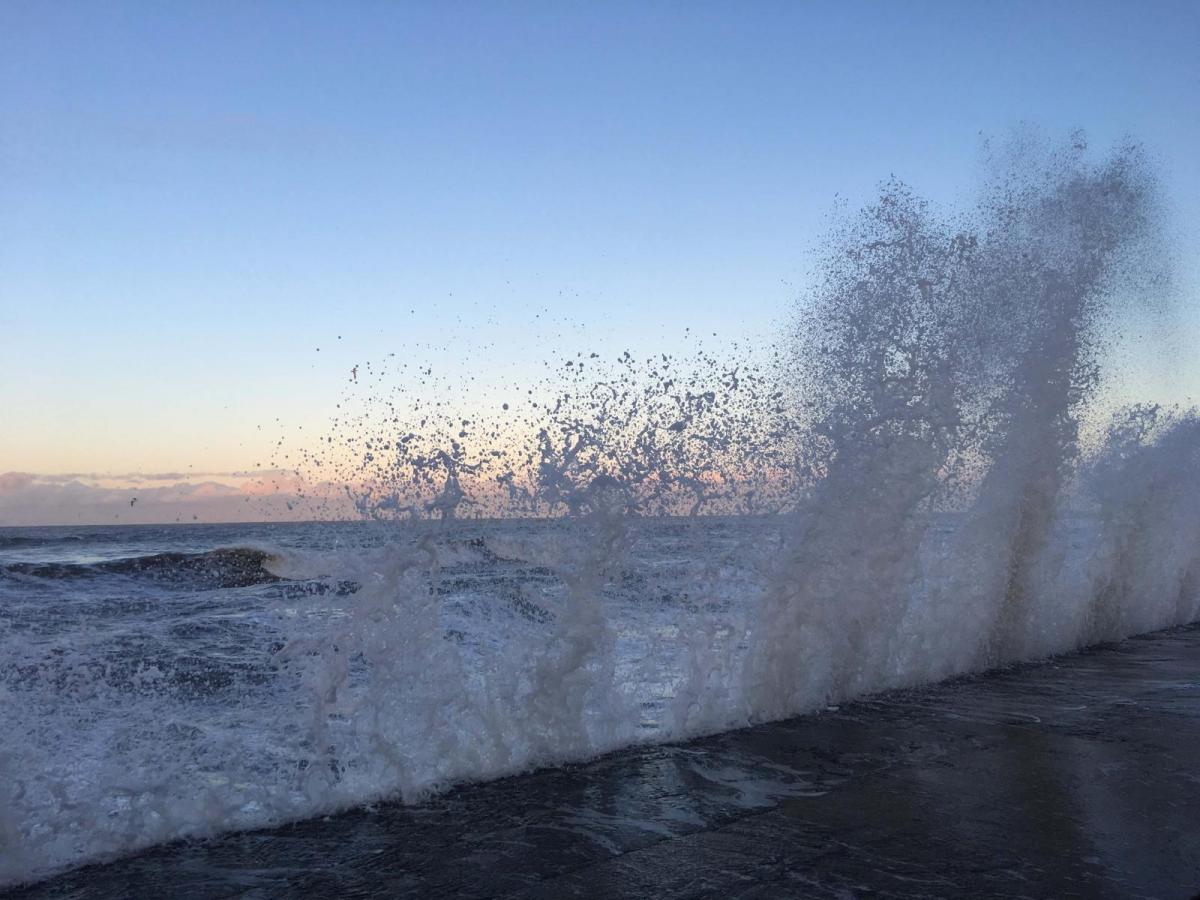 More to come from Storm Ellen

Storm Ellen has been battering Ireland overnight. The south of the Republic is littered with fallen trees which had heavy, wet leaves in the howling winds. And so, there are power outages this morning, mainly in Cork. Roches Point in Cork had a gust of 89mph and there was driving rain with flooding. Although the most extreme winds have now passed, there will be more wet and windy weather to come from #StormEllen.

“Stay away from exposed beaches, cliffs and piers along the coast during storm conditions. Remember to Stay Back, Stay High and Stay Dry.” Irish Coast Guard

As the low continued to develop last night, it underwent rapid cyclogenesis, an uncommon quick deepening which can lead to damaging winds at the surface. Two buoys off the south coast of Ireland reported gusts over 100mph, suggesting sting jet speeds where dry air is drawn down from higher up in the atmosphere. An intriguing yet feared phenomenon which was displayed in the Great October Storm of 1987. There are cancellations or disruption to ferry and train services as warnings continue for western Britain and through the Irish Sea. Around the coast of Wales, there have been gusts over 60mph this morning, only the warmth out there reminds us we are in August.

With a large swell forecast and high spring tides, the addition of strong winds will continue to cause coastal issues, flooding and for the Isle of Man “significant coastal overtopping around the time of high tide (1:15pm Thursday) leading to large amounts of water and some debris onto exposed roads and promenades.” Flood warnings for Dumfries & Galloway coast with high tide at lunchtime and flood alerts for other coasts of SW Scotland. 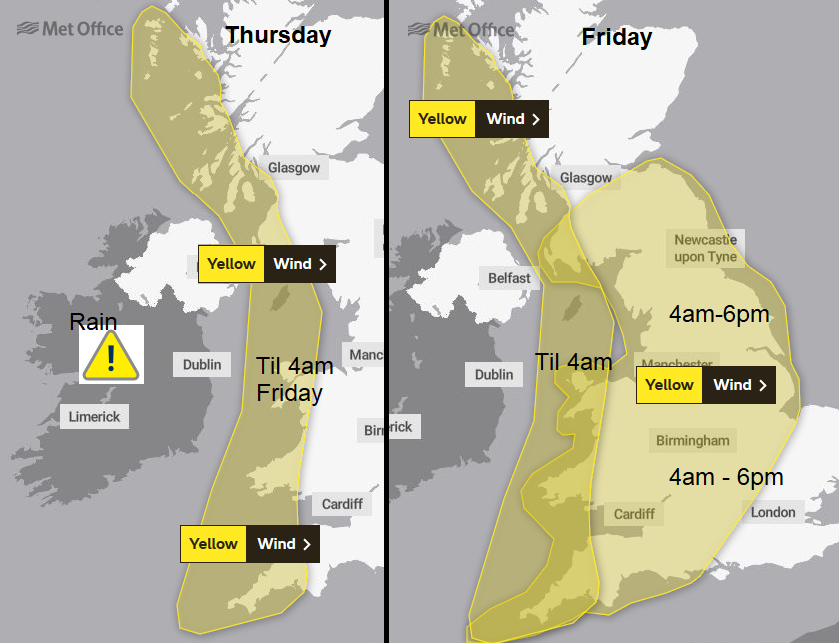 Storm Ellen is the name of a severe weather event rather than one discrete low centre. There is a collection out in the Atlantic with various bursts of heavy rain and strong winds still to come. However, nothing like last night in Cork. The weather warnings continue, ended now for Northern Ireland at 8am but in place for coastal western Britain today and overnight and through the Irish Sea. Ireland has a yellow warning for rain from Met Eireann today and tonight. There are further wind warnings for Friday over more of Britain as strong winds continue with the risk of travel disruption. 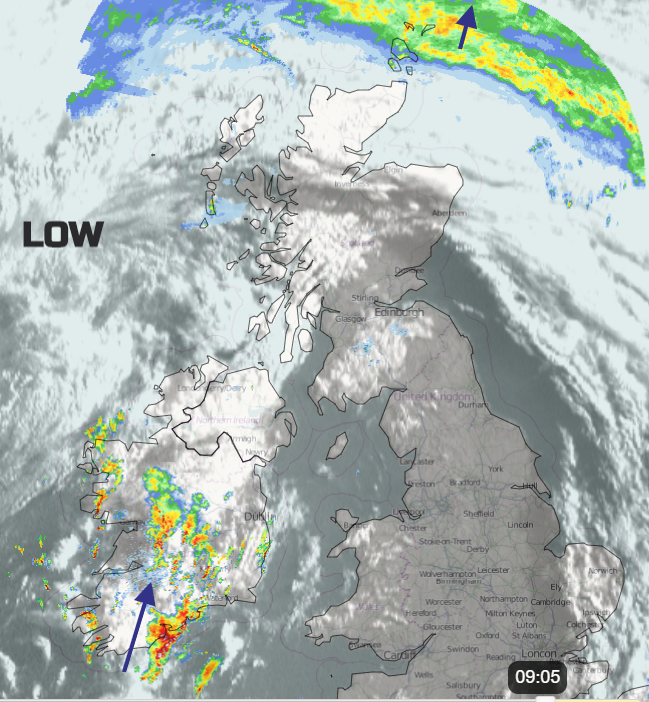 The main frontal rain band is now over the Northern Isles having swept up through Ireland and the UK last night. The main low centre is still out west but a waving weather front is moving north through Ireland bringing outbreaks of heavy rain, even some thundery bursts and we are already seeing a showery signature on the radar. This feed will include sudden squally winds with energetic showers running past. Heavier bursts reach Northern Ireland this evening. As the large low out west shoves closer, the line of showery rain will move to Wales and then northern England and Scotland tonight with the risk of heavy rain, hail, lightning, gusty winds with further heavy rain across Ireland. Those heavy showers then work their way across Wales and northern Britain on Friday with brisk winds from the SW. 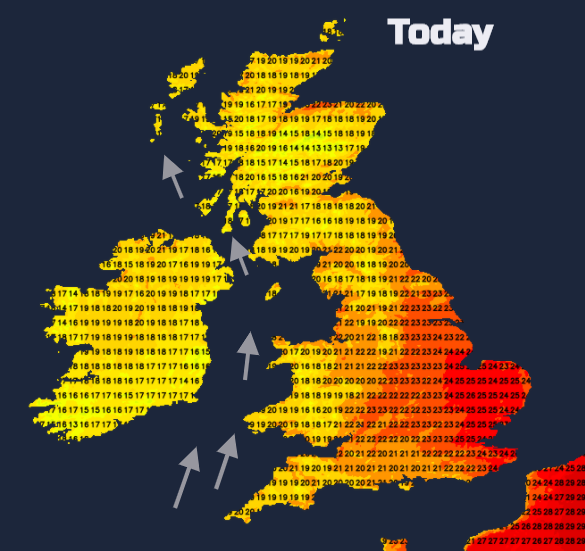 There is some warm tropical air wrapped up in all of this and in the sunshine, it will still feel warm and close. Eastern England could see into the mid-20s Celsius today where the southerly winds will still be light. Further west the winds will be fresh, strong for coasts and hills with gales around the North Channel. Gusts in the west over 60mph for exposed areas. 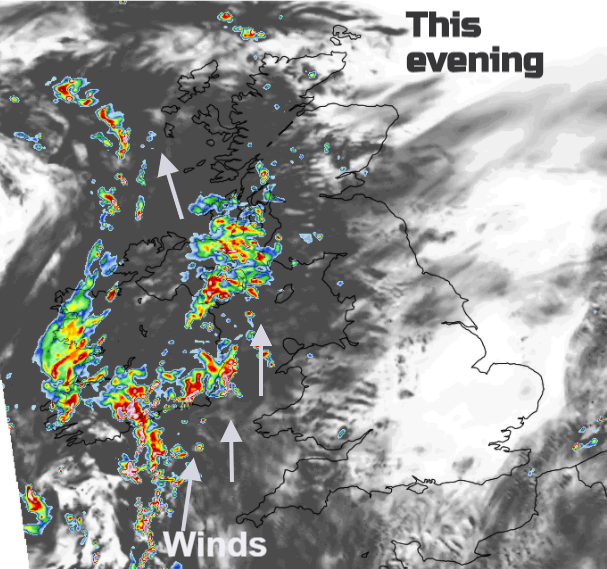 Friday sees the winds freshening for more of England and Wales. A wet start for Wales and the northern half of the UK as the showery outbreaks rotate northward leaving a scattering of showers over Britain for the afternoon. Fewer in the south. The winds keep going through the day, only easing down on Friday evening as clusters of heavy showers continue to move over Northern Ireland and Scotland west to east.

Still windy with showers in the north. It is an unsettled picture although with drier, sunny weather for southern Britain, just blustery. Sunday sees the winds easing but a shower risk for England and Wales.