A look back at August and summer 2021

Great contrasts across the UK this summer and particularly in August. Very, warm, dry and sunny for western Scotland and Northern Ireland but dull and wet in the southeast. 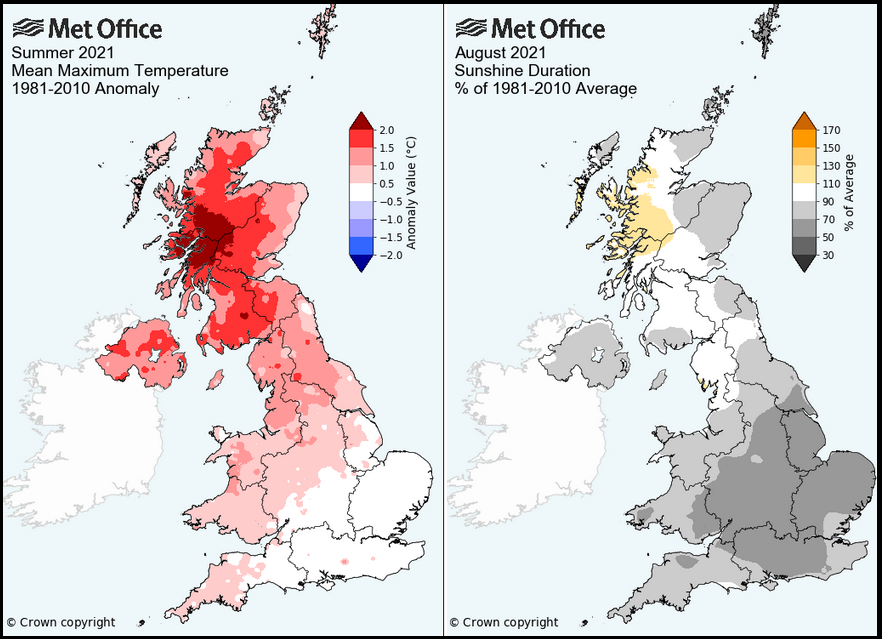 Perceptions of this summer and especially August 2021 vary greatly with a divide across the UK. For the NW half, particularly Northern Ireland, western Scotland, NW England there has been sunshine and warmth whereas for much of England and Wales, often eastern Scotland it has been cloudy and cool. For a time in July southeast England and parts of southern England were very wet leading to a bad reputation for the whole summer locally.

“The provisional UK mean temperature was 15.0 °C, which is 0.1 °C above the 1981-2010 long-term average.” Met Office. Northern Ireland has had its third hottest summer on record, and Scotland it's fourth. This added to the warmer, drier and sunnier theme for NW UK. Some parts of Scotland had their hottest summer on record including Glasgow, dating back to 1884. Further southeast it was dull and wetter than average.

Schools in Scotland have been back for a few weeks now and the summer has been drier than average to the point of water scarcity issues and warmer than average. Very warm and sunny for western areas with the top UK temperature for August. 27.2C in the Highlands. The highest 2021 temperature so far was 32.2°C at Heathrow on 20th July. We’ll see what the early September burst of heat can produce. As more schools head back across the UK this week and next, there looks to be more widespread warmth even heat. This will be a stark contrast for much of England which has just sat under gloomy cloud cover and been really quite cool. 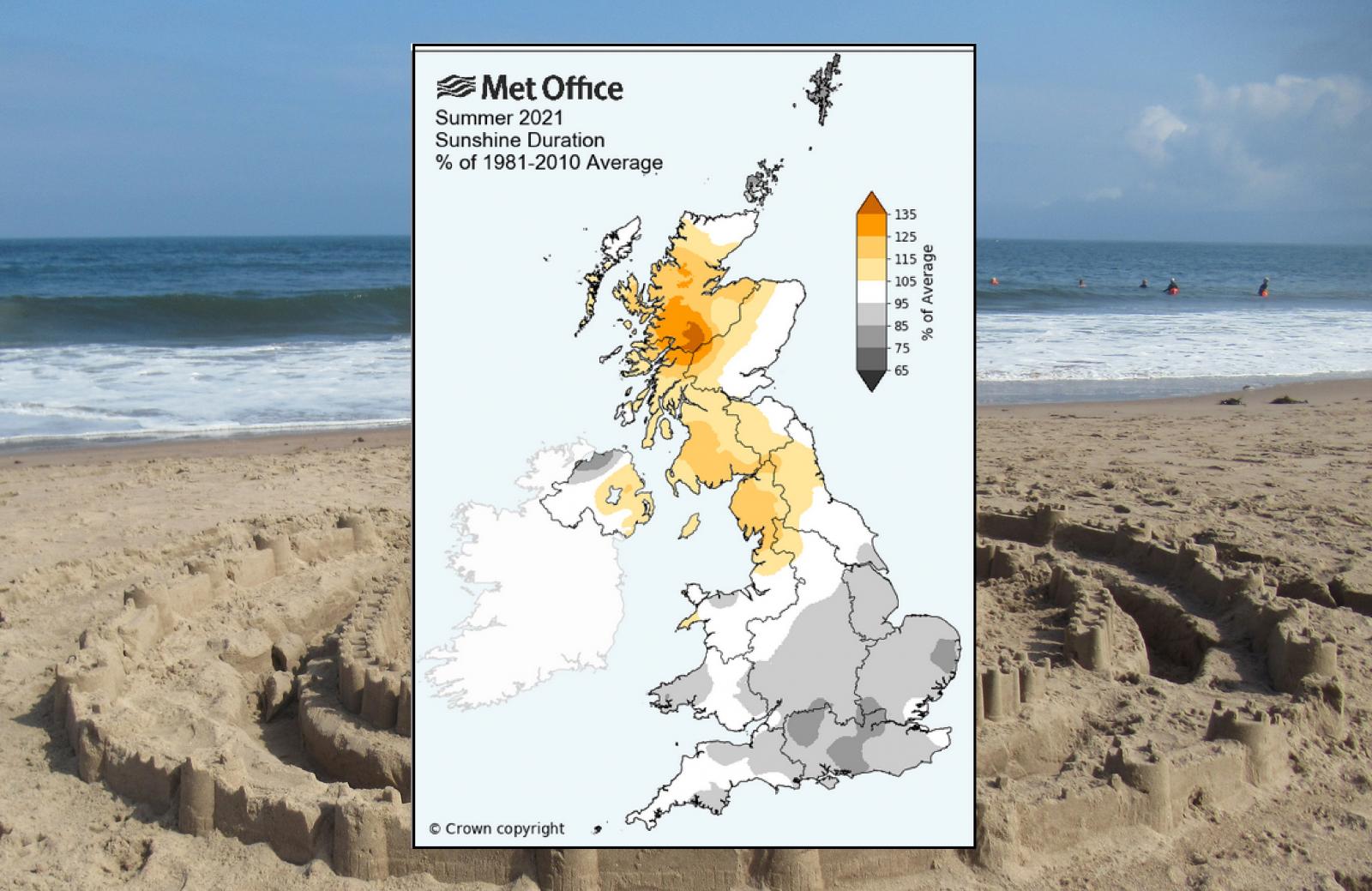 Western Scotland really does stand out as the sunny region of this summer.

Thinking about what August can provide for a long time the UK record was 38.5C in Kent from 2003 (beaten in July 2019 by 38.7C) and in 1990 Brighton didn’t dip below 23.9C in the 24 hours of 3rd August on an extraordinary day. That was the min temperature. Wales and Scotland’s highest temperature records were in the month of August when temperatures reached into the 30sC. Northern Ireland’s record was broken this summer in a spell of intense heat leading to 31.3C on the 21st July for County Tyrone. There were heatwave conditions in July for western Britain and Northern Ireland. 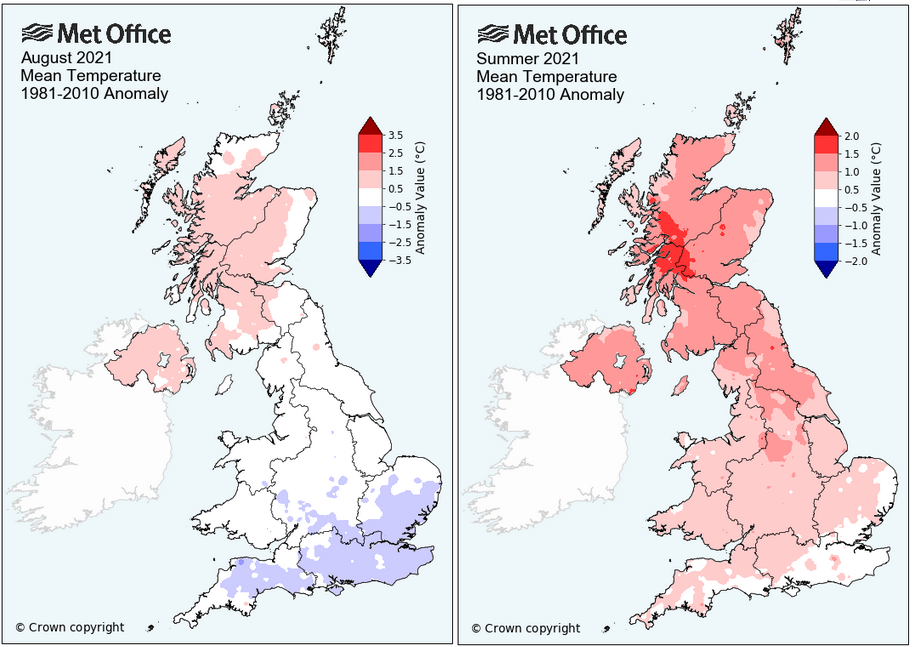 August was cooler than average in the south and southeast in August but warm overall for the UK this summer. The white area for southern Britain shows around average here. For those who feel like they’ve had a jumper on too much recently the maximum temperatures show more of a contrast, so the temperatures seen by day. 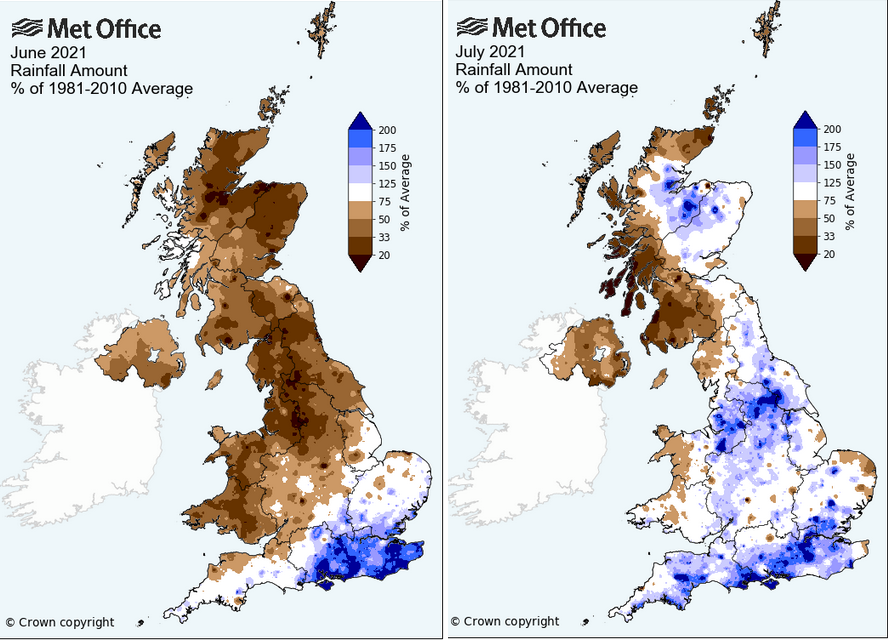 The significant summer rainfall was in June and July. This added to the “bad summer” picture for southern England but the browns on the map show how dry it has been elsewhere, which continued into August. For NW Scotland but also the Midlands into East Anglia.

The new Storm Names list has been published. A whole five were used last time. There weren’t any storms in August or June, none since February until Storm Evert appeared for late July. The low pressure affected southern and SW England with unusually strong winds, for the time of year, hitting Cornwall on the night of the 29th. With local campsites busy with holidaymakers, people had to move or take shelter and there were warnings about dangerous conditions along the coasts of SW Britain.

The high pressure which stayed and stayed during August, warding off any change in the weather did build to nearly 1040hPa. By the end of the month, Stornoway provisionally saw 1038.5hPa, which could be the highest ever recorded August air pressure in UK & Ireland. In winter, pressure readings can occasionally reach over 1050hPa. 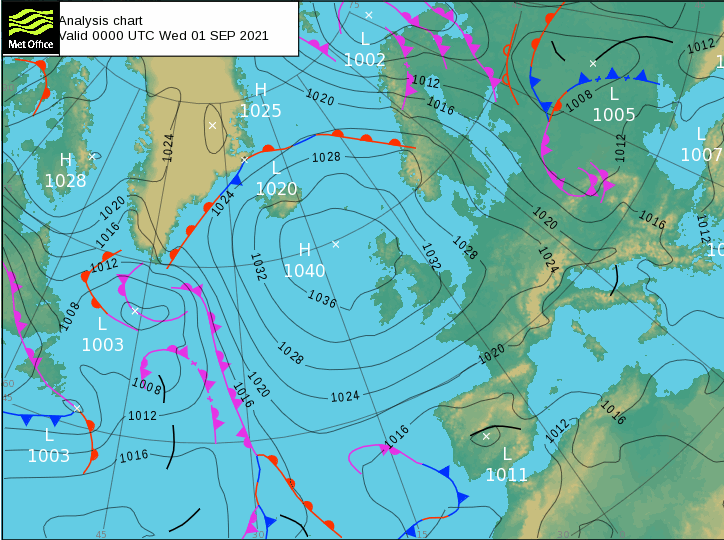 So, a peculiar summer for the UK, unusual to see the highest August temperature in Scotland. Although southern areas can see torrential thundery downpours in summer which give high totals, this summer has been very wet in places but continually dry, sunny and warm further NW. 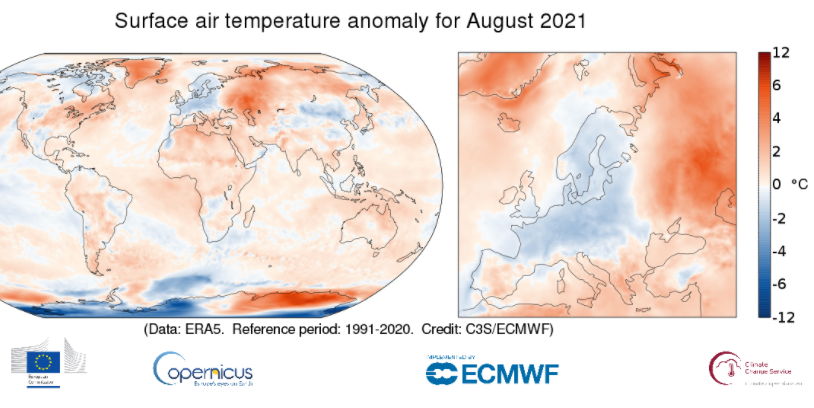 In Europe, there was extreme heat in August as wildfires raged. Sicily recorded over 48C which could be a new European temperature record. The WMO is investigating and a few days later as the heat warnings continued, Spain recorded over 47C which would be the country's highest-ever maximum. The Copernicus Climate Change Service announced that July was the second warmest on record for Europe. The third warmest July on record globally. It was the second warmest June on record for Europe this summer. June 2021 was the fourth warmest June on record globally joint with June 2018.

Just in 07/09/21 from C3S "Globally, August 2021 was, with August 2017, the joint third warmest on record. For Europe, August 2021 was near 1991-2020 average but with contrasting conditions.The warmest summer for Europe by small margin. Climate change means that dangerously high temperatures now hit European cities more frequently."