Mid-June 2021 saw heat, mainly for the SE and the threat of thunderstorms as more hot and very humid air surged up from the south.

By Sunday 13th, the UK Met Office had already issued a yellow warning for Thunderstorms, a blanket of yellow over much of England and part of Wales from Wednesday evening through Thursday. That will have pinged an alert on phones and devices but not all will see a storm. Another warning appeared on Tuesday, for Friday into Saturday morning as different pulses of thunderstorms working their way by. 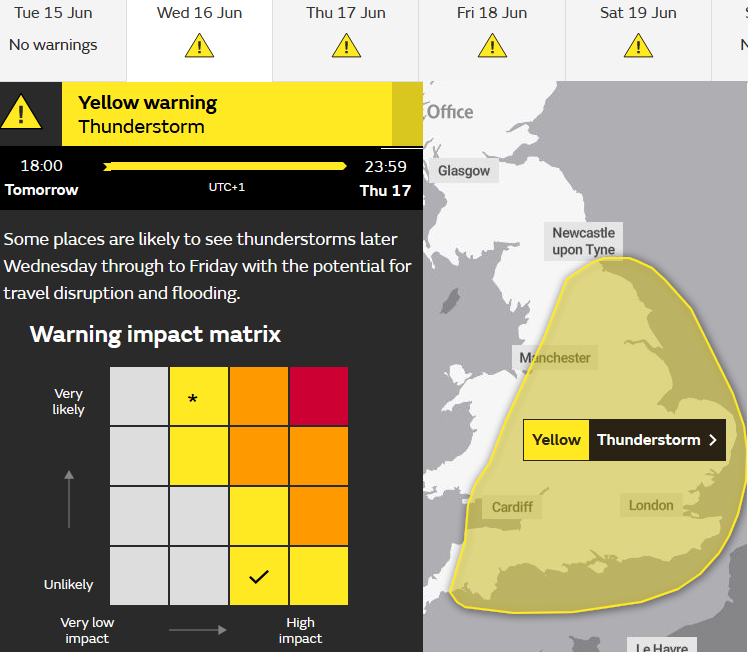 The forecast models are good at showing the various ingredients for severe convection. They can give an idea of where the thundery plume will head, although things can ease sideways a bit. But they still struggle with the fine detail of where the storms will actually impact. Will they pass over your town or 5 miles down the road?

Not all of the UK is included in the warning area as there is cooler, fresher air to the NW. High pressure builds in towards Scotland and so subdues any activity behind a weakening front. There is cooler air aloft, linked to an upper trough digging down from the north, clashing with the very warm, humid plume heading up from the continent. The stark contrast of air masses remains over the next few days. 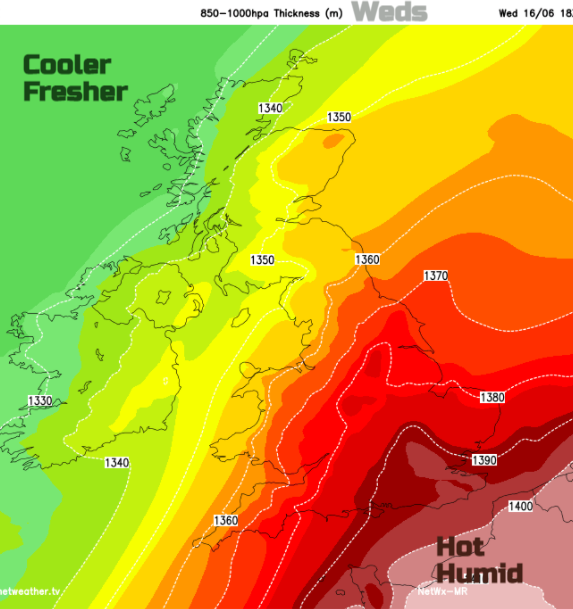 Already this week, there have been heavy showers and thunderstorms breaking out over northern Spain. Here there are thunderstorm warnings and also a heat warning as temperatures reach 38C (the UK’s top temperature, ever recorded). There is a lot of heat, humidity and so, convective energy and it’s all heading northwards.

At this stage, our UK warning can be viewed as a broad-brush ‘heads up’ message, that later this week there will be the risk of “torrential rain, hail, frequent lightning and strong gusty winds”. In years past. it was actually called an early warning but now it is squashed into the matrix framework which covers other national warnings such as winds and frontal rain.

There will be updates in the coming days (probably to the area shape) but it has to stay within the Yellow/Amber/Red categories. For those who do bother to look, there could be changes on the warning matrix, currently set to Unlikely/Medium impacts. That is for any given point within the whole warning area. The yellow does not mean that you will definitely see a thunderstorm. But it’s not ideal when communicating with the public. 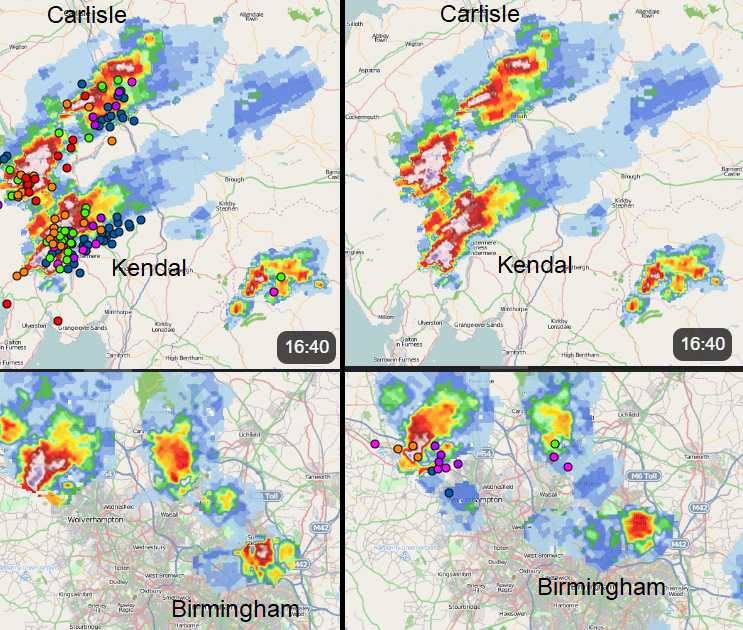 On a convective showery day, some locations get a downpour and others stay sunny and dry. The showers move with the steering wind or in convergence lines and it can be that certain places get plenty of heavy showers. Thunderstorms are just more energetic showers with added hail and lightning. We will see scattered storms or clusters later this week. In between, there will be gaps with no rain at all. The warning shows a risk of thunderstorms over a wide area.

“Yellow Warning: … low level impacts, including some disruption to travel in a few places. Many people may be able to continue with their daily routine, but there will be some that will be directly impacted and so it is important to assess if you could be affected. “MO

Thunderstorms bring the risk of Medium/High impacts but low likelihood, unless the storms have actually appeared on the radar. The storms can result in localised high rainfall totals over a short time frame and lead to flash flooding. There have been serious incidents when these localised weather events have combined with certain topographical settings and terrible flooding has resulted. And as we have already sadly seen this year, just one lightning strike can cause tragedy.

So, is a Yellow warning the right label? The Met Office will say- all warnings are for severe weather, but that the Amber situation will see higher impacts. Maybe thunderstorm warnings need to step outside of the current UK set up and do something different?

Broad-based state-wide - issued for the entire Australian states, huge land areas where severe storms may occur within the next three hours.

Detailed - for the main conurbations, all capital cities and surrounding areas. When individual severe thunderstorms are within range of the capital city radars. They look at existing thunderstorms, forecast the direction of movement for up to 60 minutes and an Immediate Threat area. A more nowcasting approach.

Here we have Heavy rain warnings, Thunderstorm warnings and Lightning warning, all with this tiering of likelihood /impacts. However, a lightning strike keeps the same potential impacts, what increases is the severity of the outbreak. 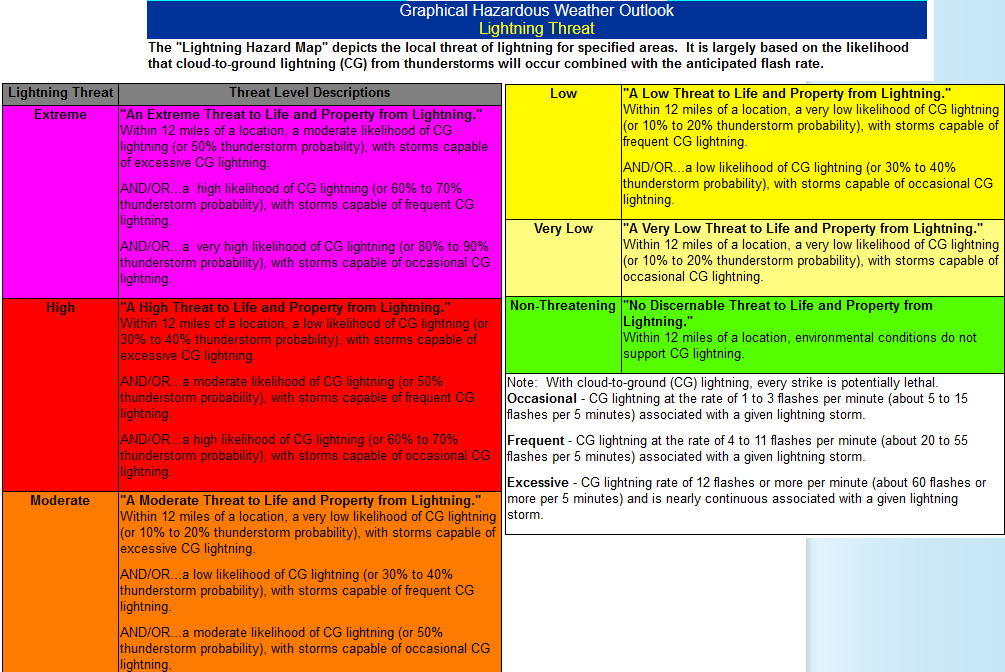 CONUS (contiguous United States) have a clear, consistent storm warning system that uses wording such as Slight, Marginal risk in the days ahead.  In the US, there are severe thunderstorms that reach into the realm of organised storms and supercells with catastrophic tornadoes. It is a difficult process with a lot of uncertainty but also huge danger. It is a different kettle of fish to here, much to the chagrin of UK storm chasers stuck at home for another season.

Again, the risk balance of say a “slight risk” but still severe, violent thunderstorms occurring needs careful communication to the public. The risk to any one neighbourhood may be tiny but for the overall region, it will be higher. In the US, they also separate out the forecast charts for gusty winds, tornadoes and large hail to give more useful information to the public and businesses. Car dealerships are more interested in the hail information. Tennis ball sized hail causes a lot of damage. 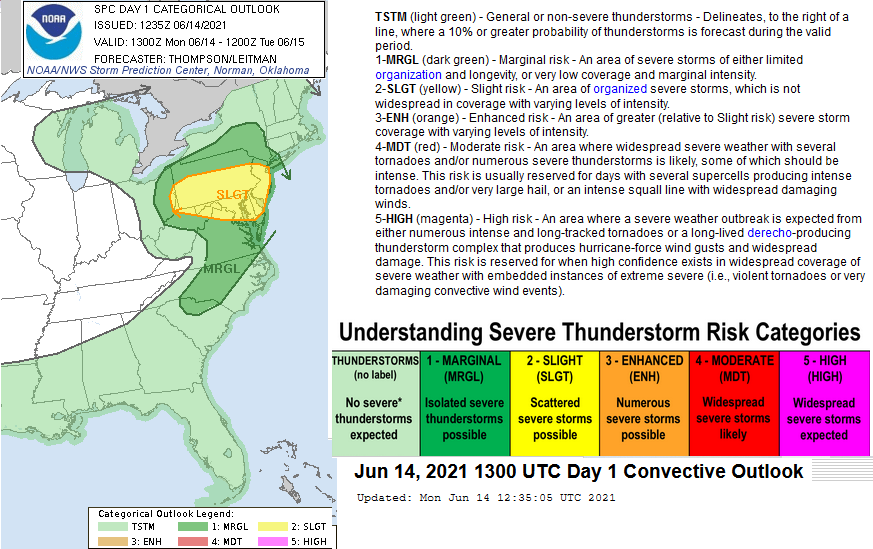 Here at Netweather Nick Finnis issues the Convective forecasts which follow a similar setup. This was an example from last summer when Aberdeenshire and Angus saw torrential rain and lightning.

"There should be an area delineated for storms regardless of satisfying the matrix, even if a low risk, say 10-20%, with further areas delineated if the risk looks higher. There should always be a warning, albeit low-level risk, when the risk is low, not nothing. As someone, somewhere, who is doing activities outdoors may be affected." Nick F 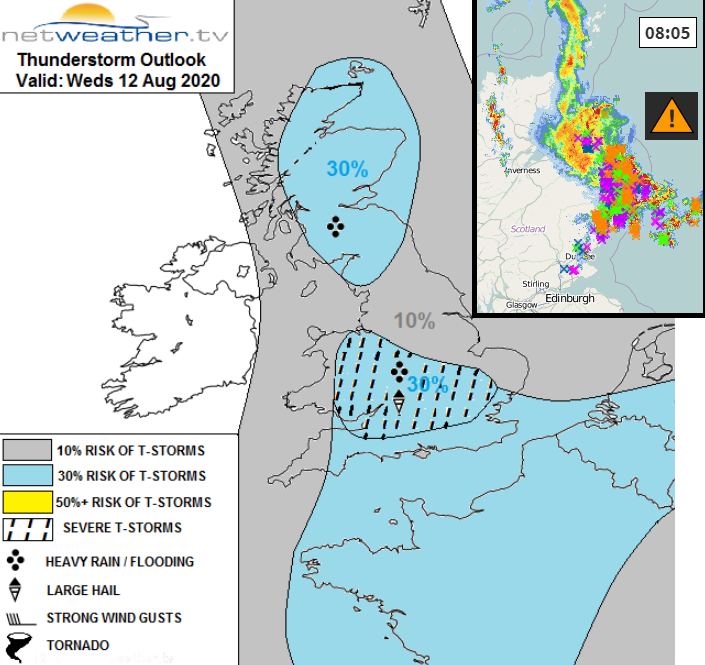 So what do the UK thunderstorm warnings include, how are the impacts divided up? Below are the additional concerns from a Heavy Rain warning to a Thunderstorm one.

All of this seems to be fitting the issue into a pre-made box. Really thunderstorms shouldn’t be associated with LOW impacts. Walkers and climbers still need to know about the risk of lightning in remote areas, the impacts could still be significant

Looking at the matrix, the low likelihood, high impact mix is fine and understandable but last summer the matrix moved from this combination to Low impacts*/very likely when the storms were actually underway over the West Midlands. The “Injuries with danger to life due to lightning.” haven’t disappeared. There might be less risk overnight to people, but by day?

Once elevated storms start moving up across the English Channel or surface-based ones begin breaking out late afternoon or evening the risk increases, the probability / likelihood of impacts is higher. The threat is greater.

From the US categories, Extreme or Significant lightning risk, or High for storms would be for the most severe weather events and are used infrequently, if at all during a year. That might equate to our Red thunderstorm warning level although we don’t see such extreme weather here. But the matrix doesn’t work in this scenario, it’s so mixed trying to add in heavy rain impacts with lightning. When lightning should remain as a high impact throughout. Maybe it's time for the thunderstorm warnings to come out of the traffic light warning system and have something else.

Back to this week's early warning broad-brush Yellow Thunderstorm warning. There has long been a worry that too many blanket yellow warnings could make people immune to the message and ignore them.

Clear communication with reliable, timely issuing and consistency is needed. Not ‘there will be a lot of holidaymakers in SW England at 10am’ and this group particularly need a warning. It can’t be that the public is trying to guess all the mysterious criteria that might have been added into the warning pot. It could be that there is something (such as slight risk or the grey area shown in examples above) whenever there is the risk of any thunderstorms that day and some upgrading on top for severe storms.

Are you going to get a Thunderstorm this week?

Within the current Yellow area, England looks more likely than Wales. The pulses are moving up from the south, heading north, northeast. Starting Wednesday evening and overnight into Thursday morning and this will have the most lively storms within it, even MCS, a Mesoscale Convective System – an organised cluster of thunderstorms. Lots of lightning overnight if you like a show.  There could be some extra thunderstorms breaking out over eastern England on Thursday afternoon, in the heat of the day. Another pulse for Friday from the south and spreading over SE Britain then eastern England overnight into early Saturday. 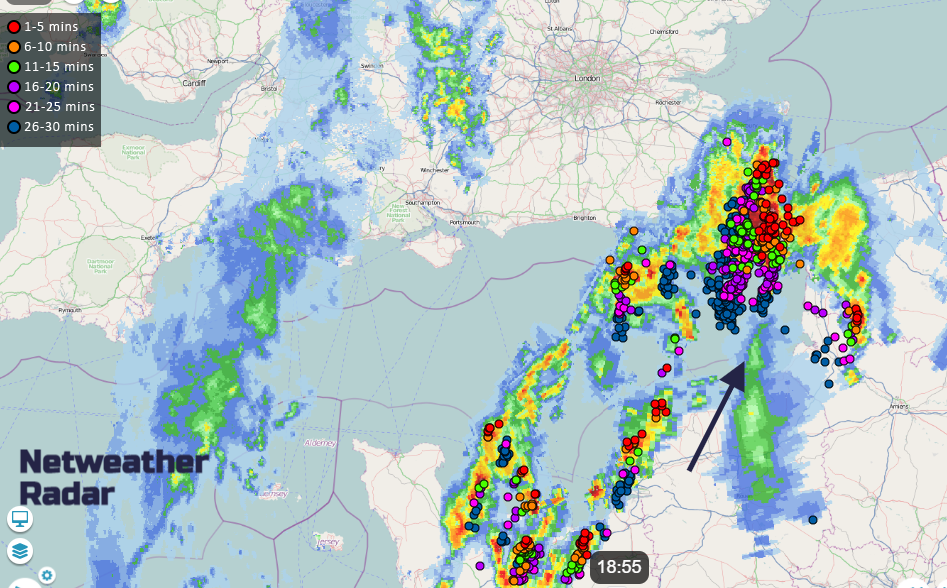 Netweather Radar Extra from May 2021

We’ll take the current Yellow warning to be like the Australia broad-based State-wide one and await more detailed information. Also waiting for the appearance of storms on the Radar. That menacing movement of colourful cells and lightning strikes edging their way across the English Channel, in muggy, warm air. Summer is here.

Will it Thunder? A percentage forecast for your location.