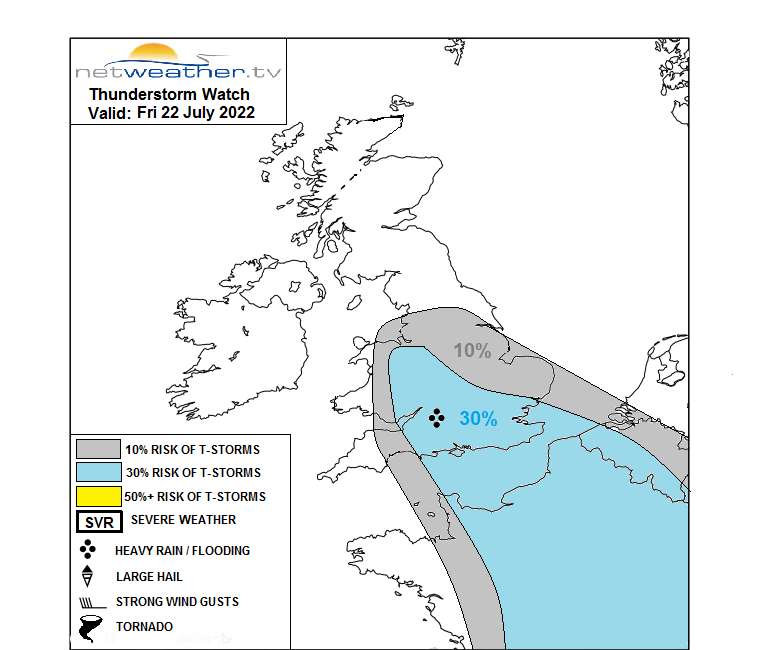 Transitory upper ridge, which brought stable conditions on Thursday, moves away east to be replaced an upper trough moving eastwards across the UK on Friday. A tongue of warm/moist air, characterised by high theta-w values and steep mid-upper lapse rates, will advect north out of France across S England just ahead of upper trough this morning – with an increase of mid-level convection spreading N into S England , with heavy showers and some thunderstorms spreading NE from the English Channel across S England, S Midlands and perhaps E Anglia through the day. Some locally intense downpours are possible, leading to localised flash-flooding, exacerbated by very dry/hard ground. Frequent CG lightning also possible with storms.

Elsewhere, slack but moist surface airmass combined with steepening lapse rates with passage of upper trough will, with surface heating in sunny spells, yield around 300-700 j/kg of SBCAPE across E Wales, Midlands, W Country into central S England from late morning into the afternoon. This will support the development of more surface-based heavy showers and some thunderstorms too, with surface breeze convergence zones in the slack flow focusing convection. With light winds aloft, showers/storms will be slow-moving – so may produce localised flash-flooding – especially where they train along convergence. Some funnel clouds are possible too with convection along breeze convergence. Any storms should ease and fade after dark.

Issued by the Netweather forecast team whenever there is a risk of storms or severe convective weather, these discussion based and in depth forecasts will highlight the areas at risk and give an in depth description of the risk and the factors surrounding it.