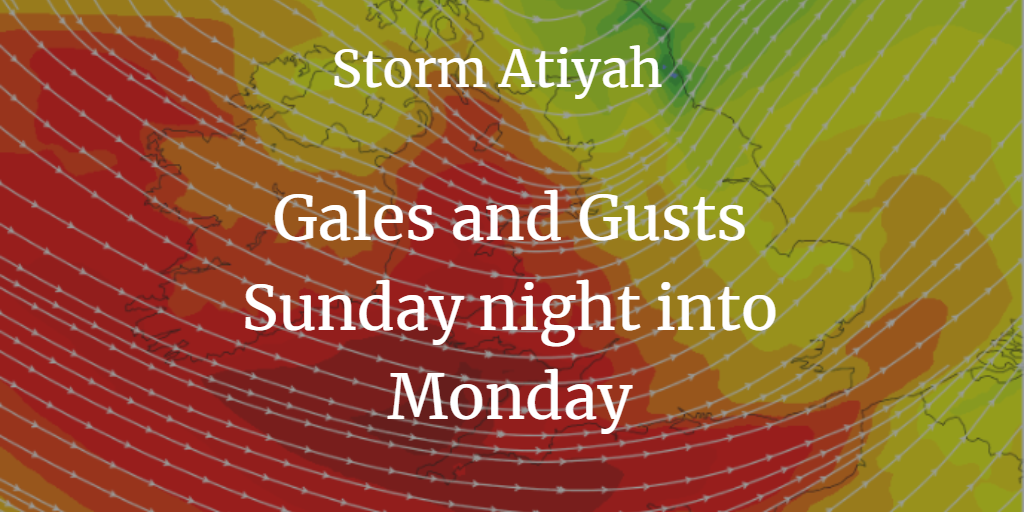 Met Eireann has named Storm Atiyah, the first-named storms of the 2019/20 season, due to strong winds. UK warning - "Severe gales are expected and may cause some disruption." 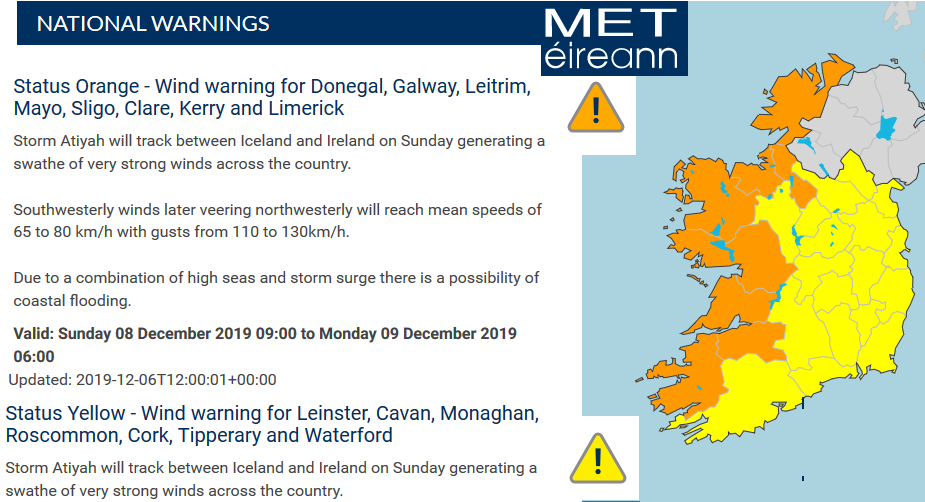 "A swathe of very strong winds across the country (Ireland).  Southwesterly winds later veering northwesterly will reach mean speeds of 40 to 50 mph with gusts from 70 to 80mph. Due to a combination of high seas and storm surge, there is a possibility of coastal flooding." 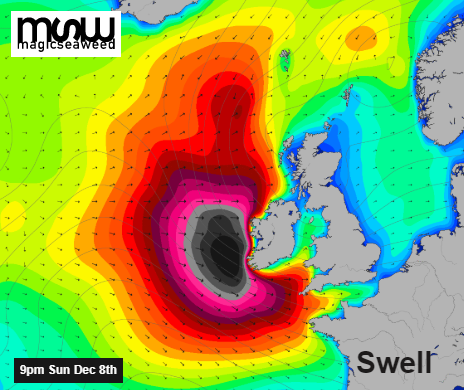 No mention of Atiyah in the Met Office Yellow warning text. It's tricky when the strongest winds will be for western Ireland (think of the Netherlands now in the grouping) but if you are going to do a joint project you all have to share. Met Eireann still warns from set wind strengths, not just impacts like the UK. Sunday night is not a time of major concern for UK Met Office in terms of impacts but Monday morning still could be a bit lively in places with lots of people on the move. 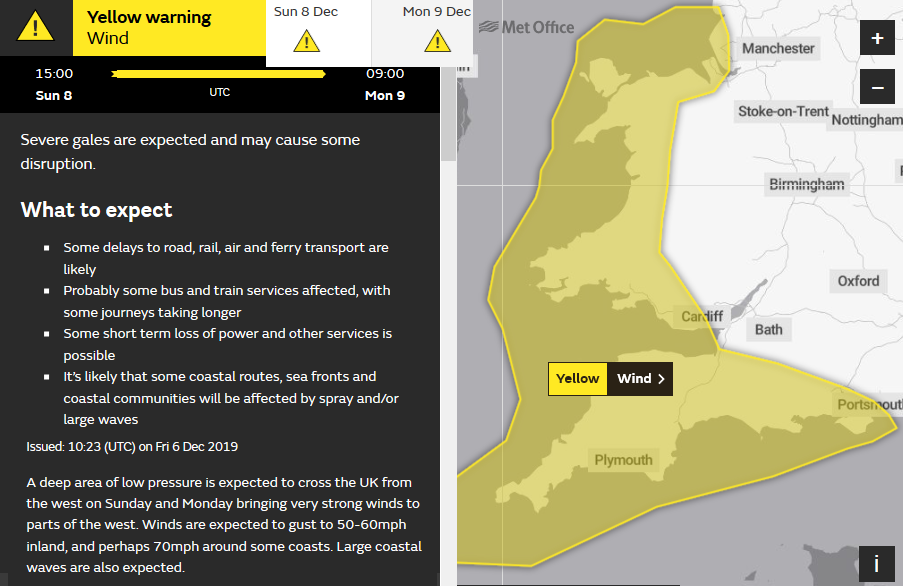 "A deep area of low pressure is expected to cross the UK from the west on Sunday and Monday bringing very strong winds to parts of the west. Winds are expected to gust to 50-60mph inland, and perhaps 70mph around some coasts. Large coastal waves are also expected." Met Office

It's quite an awkward situation to warn about. For the UK, there will be two spells of wet and windy weather this weekend, one Saturday night as an active cold front goes through and then the winds associated with Storm Atiyah Sunday night and early Monday. The UK Met Office has to manage the shared storm naming but also expectations of weather impacts for its patch, the UK. South of the low centre will see the strongest winds, in the SW quadrant but exposed parts of eastern Britain could also experience strong winds during Monday as the low pulls away towards Denmark. 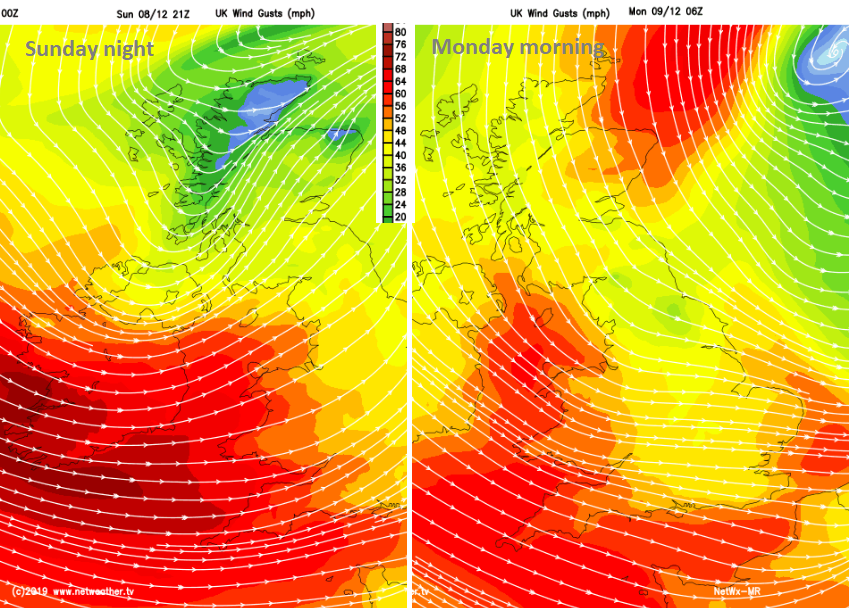 The winds will strengthen for SW England, Wales and throughout the Irish Sea as darkness falls on Sunday. The warning runs from 15z Sunday until 09z Monday, covering the Monday morning rush. The strongest winds look to be overnight across Cornwall, Devon as a westerly - up the Bristol Channel, along the south coast of Wales, along the English Channel. The warning area includes Cheshire, North Wales and Merseyside up to Blackpool, as this is an exposed direction and the tuck of very strong winds could clip these areas. Severe gales for exposed coastal areas are likely with gusts around 60mph. 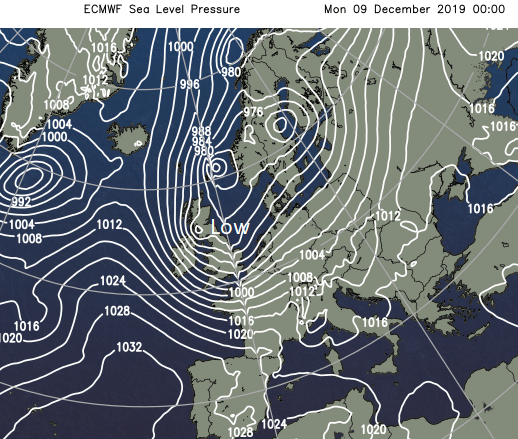 By early Monday the winds will have veered to a more NW direction and eased for Ireland. After some lively ferry journeys for the Irish Sea, North Channel and the English Channel at the end of the weekend, winds will strengthen for NE Scotland. This could affect ferries from Aberdeen to Northern Isles and roads across Grampian with snow showers in the flow. The gales continue for the Channel Islands as the winds ease during Monday morning for SW Britain. Depending on how the low clears away there could also be issues for eastern England from the strong NW winds on Monday.

More about the Name our Storms initiative.

Online chat in the Netweather forum