Birds and the Weather - Empty nest

Last weekend the blue tit nestlings in my garden bird box fledged. They left and I miss them. Their parents have been great entertainment throughout lockdown, their comings and goings. Their busy, busy lives of never-ending feeding and the excitement of finally seeing the little ones peek outside.

After weeks of fine, warm, dry and very sunny weather the exit time coincided with June 2020’s wet, blustery and cool start. That didn’t seem ideal and I was concerned for them. Was the inclement weather another worry to add to that lurking magpie?

Bird life is mainly about feeding at this time of year. There is survival as always, for the parents and then the emerging young, especially in the dangerous days of fledging. But most of their energy is focused on the feeding of their demanding, chirping family.

I have no idea when they fledged last year because I had other things to do. In lockdown my garden birds and greedy squirrels have been the equivalent of soap opera stars and the same interest has been occurring in gardens across the UK.

Spring this year was warm, dry and the sunniest on record. Autumn/winter was very wet for much of the UK but not cold. The early June dip in temperatures and change to unsettled weather won’t cause much discomfort to the little birds. It is lengthy periods of very wet, windy or colder weather which the birds struggle with.

If you remember back to Feb/March 2018 when the Beast from the East arrived, that spell of harsh cold and lying snow did have effects. I remember several fieldfare and redwings appearing in my garden, I’d not seen them before. Coming to find food in gardens as parts of Britain were covered in snow. These birds would usually take berries from the hedgerows in autumn and fruit then ground feed from fields and gardens for worms as they winter here, having migrated from Iceland or Scandinavia.

Even the conditions from the previous harvest can have a bearing. Wet, soggy summers or Septembers lead to problems for farmers but can result in grain on the fields later in the year, as long as the stubble is left for a time before ploughing. Pigeons and geese can enjoy a feast compared to drier years with an early harvest when the stubble fields might be ploughed more quickly.

Garden birds such as Great Tits and Blue Tits will be looking for caterpillars on spring tree leaves. With our warming climate, there has been an overall trend to warmer conditions throughout the year (although there will be extreme events within that trend). The moth and butterfly eggs appear earlier in the year on those early leaves, with the peak of caterpillar numbers shifting too. In 2019 there was warmer than average weather in the first half of the year, the warmest February on record and heat in April so laying and hatching was earlier but with wet weather at the start of summer, there could have been fewer repeat broods.

The British Ornithology Trust (BTO) publish a Breeding Bird Summary report each year which includes weather information and looks at these patterns. The low temperatures in March 2018 suddenly froze shallow water and was thought to have affected Kingfishers. Without their supply of small fish, the breeding population fell by 38%. Small birds such as the Goldcrest, wren and long tailed tit also declined and because of their size are more vulnerable to cold weather. However, without another harsh winter this seemed to be a one-off dip.

Even though migratory birds in Africa missed the actual 2018 snow event, when the time came for them to fly to the UK there were strong north winds over the Saharan region. Aerial feeders such as Swifts and house/Sand martins, were down in numbers that summer. So, it’s not just the weather here but anywhere on the journey. There are other factors, of course, such as habitat changes and disease.

For us, gales, heavy rain and low temperatures can cause difficulties for our travel, never mind poor birds. Low cloud can cause birds to become disorientated and they drift off course, sometimes landing on ships or just in areas that they aren’t usually seen in causing excitement in the twitching world. Many do die, often smaller birds which are exhausted. Low cloud and fog can delay geese and ducks from setting off. Strong winds can mean birds need to compensate for their relative direction and so use more energy or if there is a headwind.

So, what about the garden birds? You may have noticed the aerial feeders almost playing games in the warmer, more humid air. Swallows and swifts seemingly impossibly whizzing back and forth catching insects. If it turns cold, wet and windy there will be fewer insects about, which is fine for a day, but a longer spell will have impacts, especially on the newly fledged birds.

In late May as the chicks hatch the female keeps them warm and it is at this time that a lot of food is needed. A cold snap would affect the number of caterpillars about and if you have watched the feeding routine you will know it is incessant. Not the time for food shortages. Once the chicks are ready to fledge, for blue tits at around 18-21 days old, out they pop (I missed this bit but saw one chirping on the ground). They will still need lots of food and to avoid predators now they are out of the safety of the nest, but the brief wet and windy weekend shouldn’t have worried them too much. 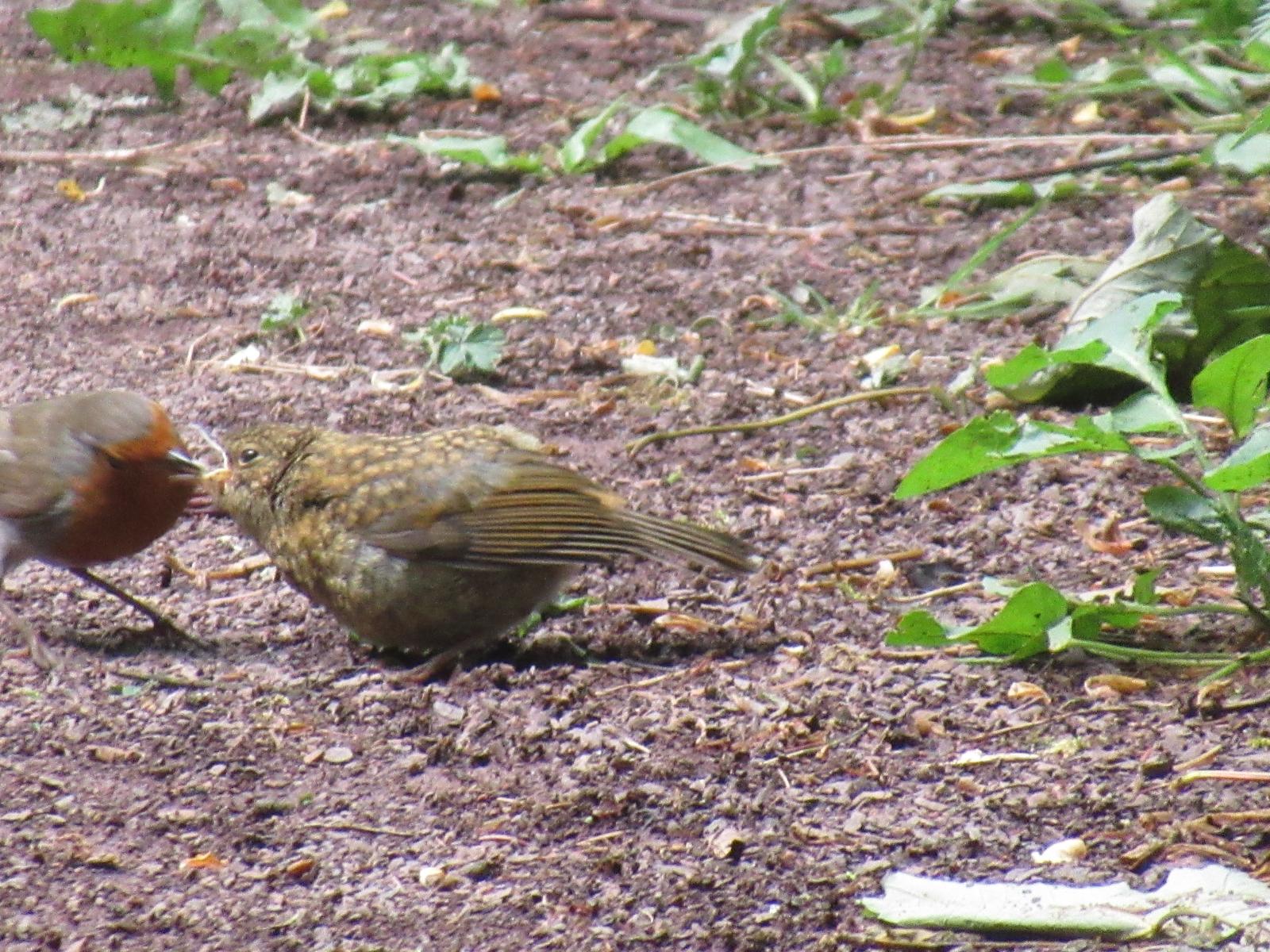 I met this baby robin out on a nearby path, its downy, fluffy feathers make it look huge. This layer of soft feathers helps keep it warm as gains its independence and will have helped keep it warm in the nest whilst its mother got more food.

Both the RSPB and BTO recommend continuing to feed birds all year round as garden birds may struggle to find food, they still may have young to feed. If there is a chilly or very wet spell, then your supplies will be well received.  It was very dry and when the earth is hard, birds can’t get at the earthworms. During the summer months, birds require high protein foods, especially adults whilst they are moulting. For more advice on feeding garden birds in summer check out their websites. I reassuringly have visitors back at the feeders, all is well.