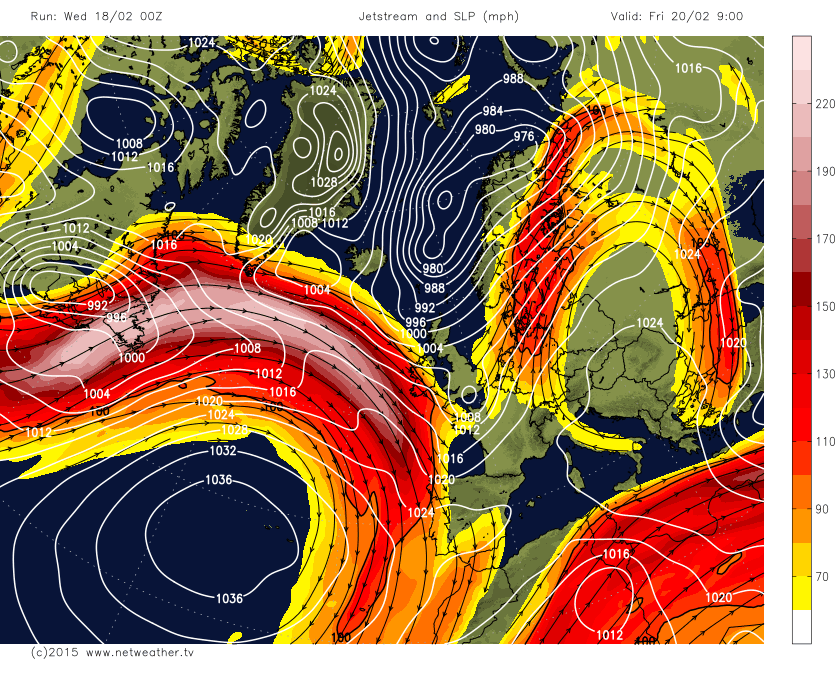 We see an increasingly unsettled outlook as we head through this first full week of the New Year. A transient ridge of high pressure, which brought dry and cold conditions on Sunday to much of the UK and western Europe, gets pushed aside as 200 mph jet streak coming out of NE Canada and across the Atlantic heads towards the UK over the next few days. This strong jet is being driven by a steep thermal gradient created by an increasingly deep and cold tropospheric polar vortex over Canada and western Greenland and warmer tropical maritime air further south.

The full effects of this strong jet stream will be felt from Wednesday, as the jet arrives Tuesday night, bringing with it episodes of stormy weather, as deep low pressure systems wind up to the north of Britain.

Before then, Monday will be fairly calm if rather cloudy for most, though turning milder as a southwesterly wind picks up – this wind reaching gale force in the northwest later. A cold front arrives in the west Monday night, introducing a band of heavy rain across northern and western areas. This rain band clears northern and western areas Tuesday to brighter and colder conditions, clearing SE England by midnight.

Meanwhile, a deep area of low pressure winds up to the west of Iceland later on Tuesday and through Wednesday, its central pressure dropping to around 936mb. A strong jet will lie to the south of this intense depression and will push east then northeast parallel to an active frontal system which will push SE across the UK on Wednesday and Wednesday night. A strong pressure gradient will exist along the frontal system, bringing a spell of very strong winds to the north and west on Wednesday, aided by the strong jet stream. GFS indicates wind gusts of 50-60mph possible around coasts and over hills of the north and west on Wednesday near/along frontal system, perhaps up to 70mph over exposed parts of western Scotland.  The frontal system clears through most areas Wedensday night, with winds easing from the west, though still windy in the NW. However, GFS and ECMWF show a wave develop along the frontal zone before it clears the south of England, bringing a spell of heavy rain Thursday morning before clearing in the afternoon.

Otherwise, Thursday will see a drier and sunnier respite before another deep depression moves NE over the Atlantic to bring wet and very windy weather for Friday, this time further south between Iceland and Scotland early Friday. Some uncertainties over exact track and depth. The low deepens Thursday mid-Atlantic in the left exit of a new 200mph jet streak moving out of NE Canada and east over the Atlantic. 06z GFS and 00z ECMWF take the low NE between Faroe islands and Scotland, GFS op deeper at circa 960-962mb, EC a lot shallower at 989mb at 06z on Friday. Should the 06z GFS op solution come off, we could be looking at gusts of 60-70mph across north Wales, N. Ireland, N. England and Scotland. Perhaps 70-80mph across northern and western Scotland, with up to 90mph with exposure in the western Isles. So this could be a powerful winter storm to end the week. 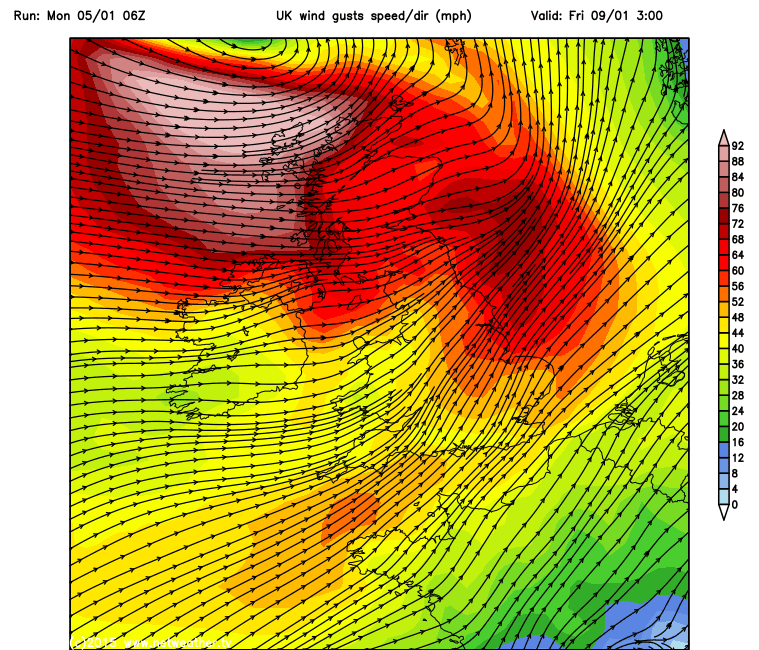 Through the weekend and the following week, a strong and deeply cold tropospheric vortex dominates the polar regions to our north across Greenland and northern Canada, so we keep a strong westerly jet stream across the UK. So we will see further low pressure systems or waves moving east and affecting the UK, bringing spells of wet and windy weather and also an increasing risk of snow.  Ahead of this systems will be milder interludes, but it in the wake of these systems will be colder polar incursions, which will bring cold enough air for snow, even to lower levels and we could even see some wintriness in the south at times, though this maybe clearer closer to the time of the cold incursions. Saturday, for example, 06z GFS indicates a cold polar NWly flow, with 850mb temps of -6 to -7C dew points of 0C or below, cross pretty much all of the UK – which would indicate a risk of snow falling even in the south with any precipitation. But, too far off to be forecasting snow anywhere for now, but polar incursions could become increasingly cold and longer lasting after Friday, as the jet shifts south to allow the UK to remain longer under colder air. 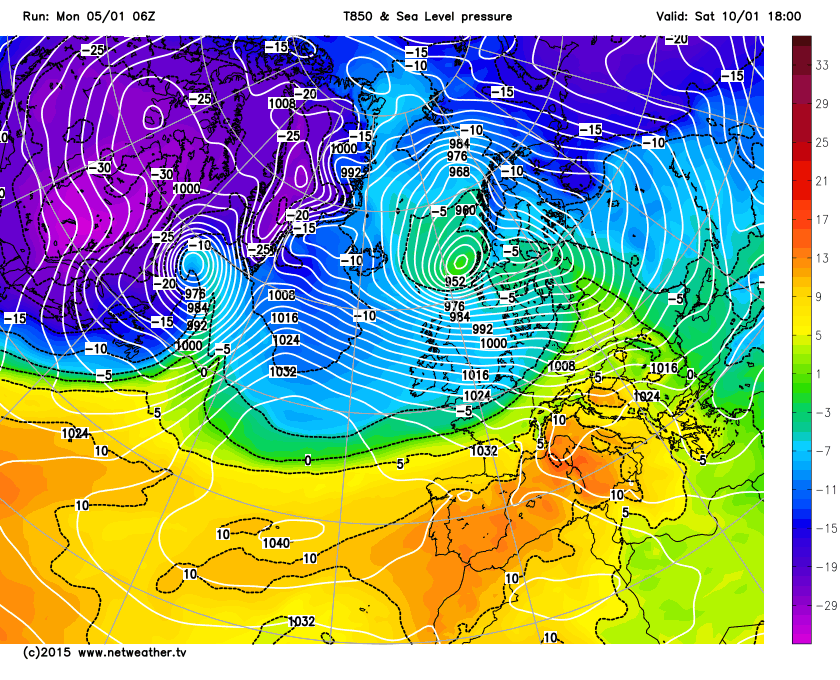 There have been continued hints from GFS ops and parallel runs along with GFS ensembles and ECM ensemble clusters over the last few days of a pattern change around mid-month, involving a weakening of the Atlantic westerly jet to allow amplification of the flow to allow high pressure to build just west of the UK initially. While further east, troughing digs deep across Europe towards the Mediterranean. This could lead to an increasing risk of a more sustained cold and wintry spell for the UK during the second half of January, but until these ‘fantasy’ chart s come into the more reliable timeframe, it cannot be certain whether this pattern change will occur.  There is indications from some models that the Madden Julian Oscillation (MJO) – which is an intra-seasonal mode of tropical convection which can force pattern changes in our latitudes – may move into a favourable phase to force a more blocked pattern across our side of the northern hemisphere from mid-January. Though again, there are uncertainties whether we’ll reach the ideal phases of the MJO for this to occur. The Polar vortex, which looks to be well organised and strong to the north of the UK over coming days will also need to show signs of weakening or displacement for the UK to have chance of a more sustained cold and wintry spell.  With less certainty on this occurring. 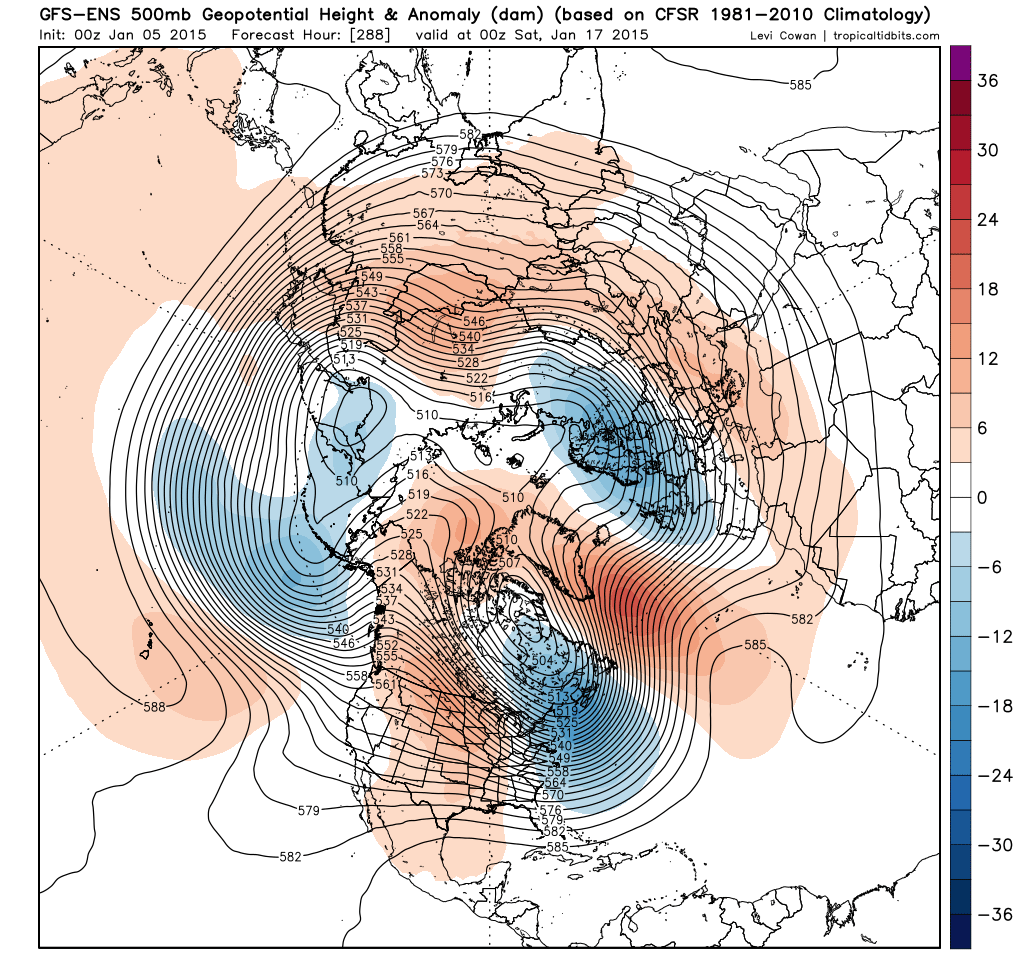