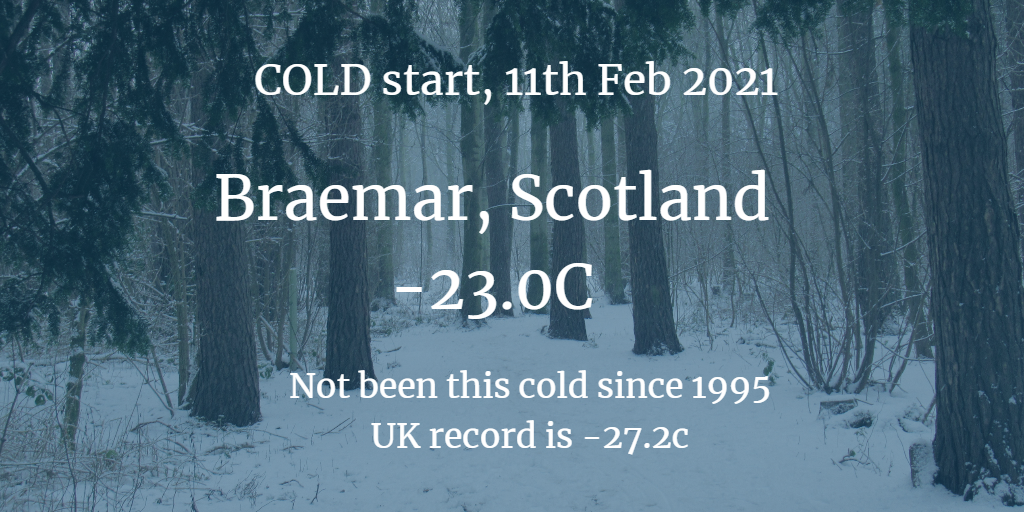 It has been a very cold night across the UK. The temperature in Braemar, Aberdeenshire fell to –23.0C at 08:13 on Thursday morning, 11th February. It hasn’t been this cold in the UK since 1995. For a February night, since 1955.

Edinburgh -13C, Aberdeen down to -15C and several Scottish sites had their coldest February night on record. Glasgow airport dropped to -11C. In England and Wales, many places were several degrees below zero.

This -23C, is colder than the extreme winter of 2010 when there was also deep, long-lasting snow and also than the ‘Beast from the East 2018’ which occurred later in the year, being at the end of February into March. This current wintry weather is a result of a similar setup with processes taking place in the upper atmosphere (including Sudden Stratospheric Warming) and a surface high pressure keeping things steady as bitterly cold air flows in from the east. 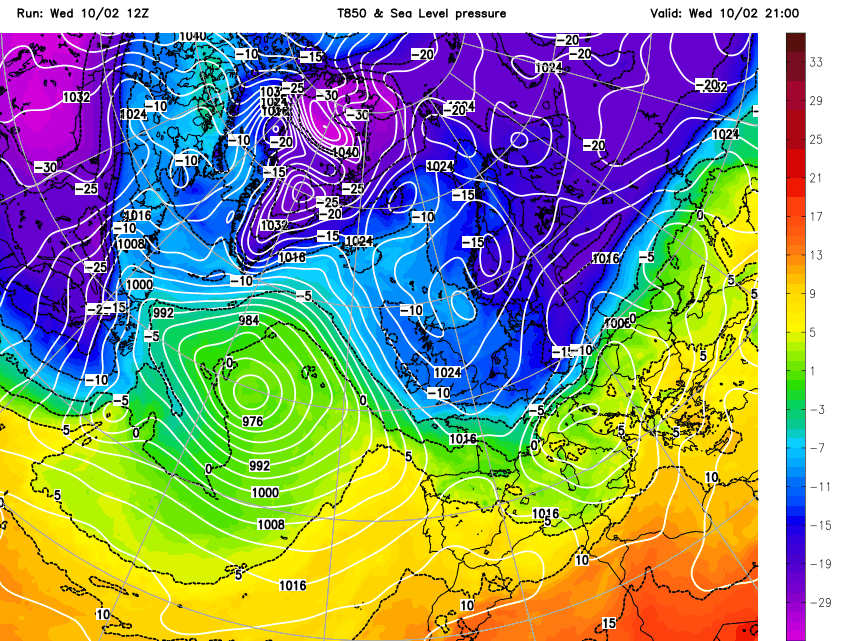 Northern Scotland has had lying snow for much of February before other parts of eastern Britain joined in with the snow showers off the North Sea. There has been great variation in snow amounts with the bitter winds adding to drifting with this very light, graupel-like snow. It’s similar to polystyrene balls. With clear skies, still, relatively long nights allowing a good length of time for any daytime heating to radiate away into the night sky, temperatures just keep on falling over the snowfields. Sunrise at Braemar is 07:48 so temperatures were still decreasing for nearly half an hour this morning even once the sun was up. 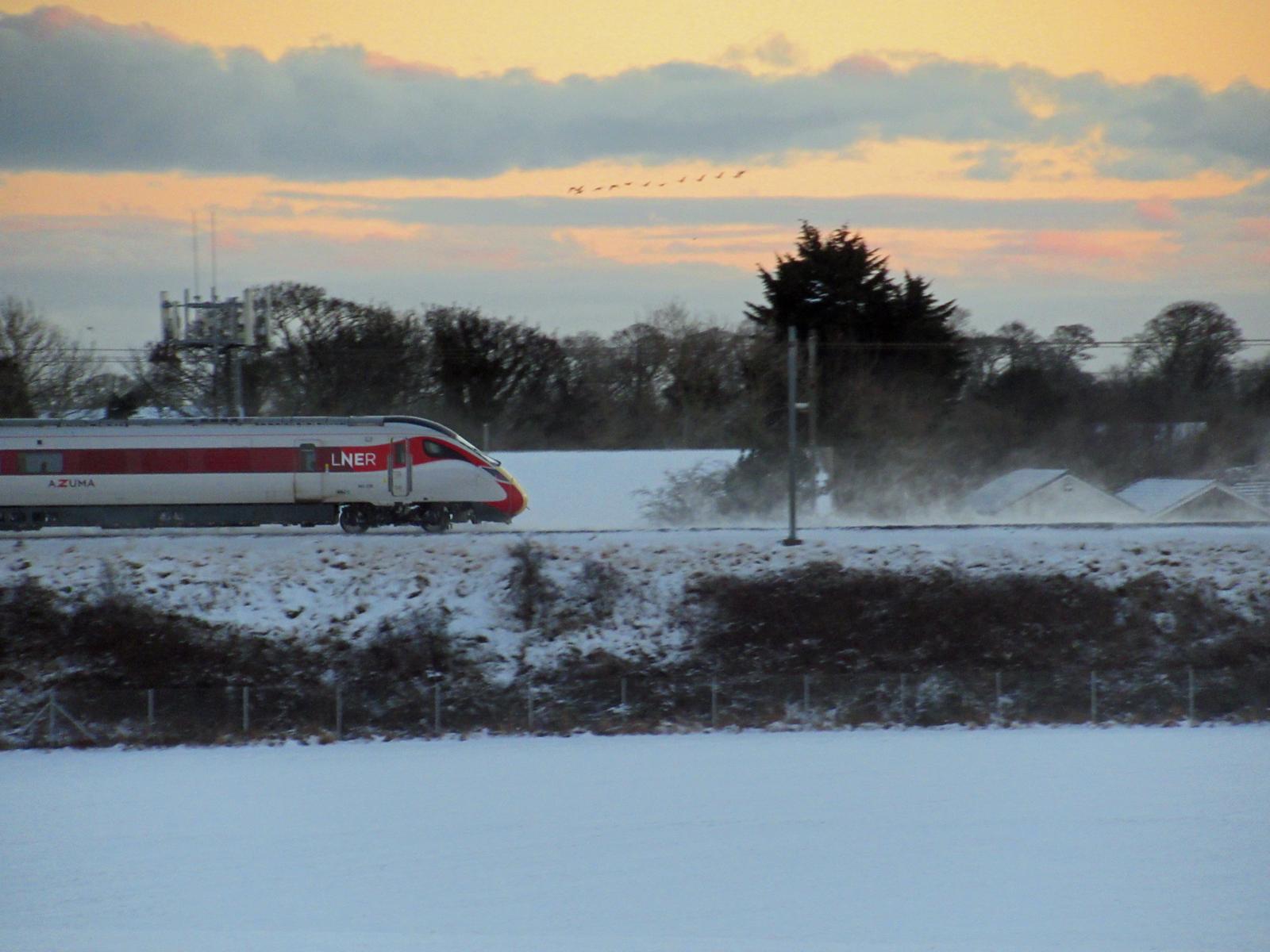 The snow showers from the east aren’t as active now but they’ve not disappeared completely. It remains cold by day with ice, patchy freezing fog and severe frost by night. Next,  there is an Atlantic front heading in from the SW,  already bringing snow to Ireland. However, the progress from the SW will be sluggish due to the blocking high and the lines of showers could get stuck, bringing further deposits to coastal NE Britain. The winds begin to pick up which brings a significant wind chill factor.

By Thursday night, there will be some high cloud away from northern Britain, a few more snow showers in the northeast. So not quite the extreme cold we’ve just seen but still very cold for Britain with a severe frost for Scotland. And another push of very cold air into eastern England on Friday but the wind is stirring the air so the air temperature readings may not be as low as the calm midweek, but it will feel bitter out and about. 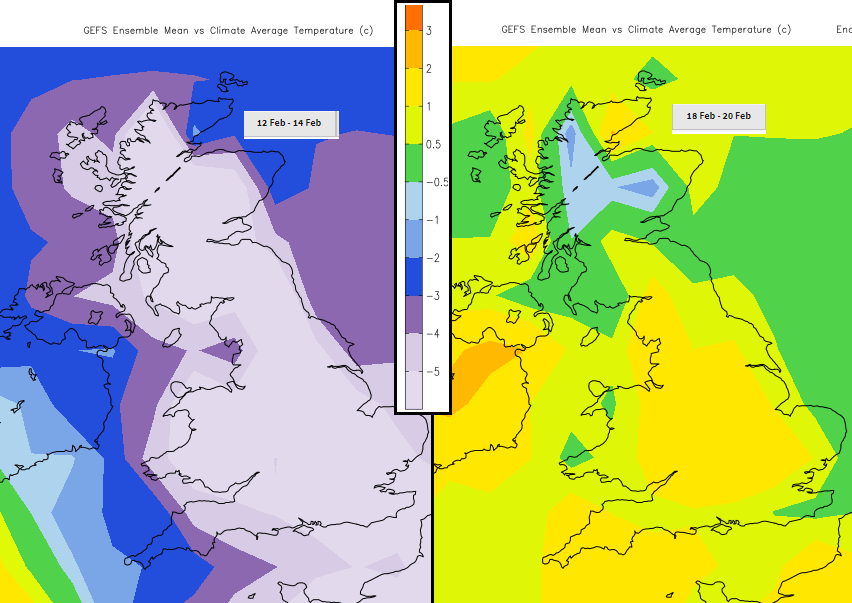 Mild air is on the way but there are plenty of snow and ice warnings as that begins to edge in. This very cold air won’t be shifted easily and there could be freezing rain at the weekend which would bring sudden dangerous icy conditions. Further disruption is forecast.

This February cold, snowy event certainly has been quite something. We’ll just have to see what happens when it all thaws. 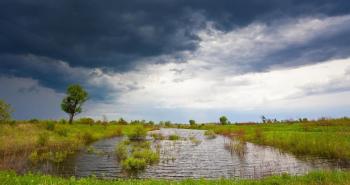 RECENT FORECASTS & BLOGS
Atlantic Canada bracing for Hurricane Fiona's arrival
How ex-hurricanes can often shape our weather in September, even if they don't come near
Legal Terms - Privacy Policy -