A round up of the UK's weather records. Covering rain, wind, high and low temperatures, air pressure and other meteorological phenomenon.

Every month another record seems to fall. The wettest here, the warmest there as records, which date back years or centuries, are surpassed. We’ll have a look at UK temperature records, rainfall, sunshine, wind gusts and atmospheric pressure.

The Met Office oversees the UK data, with a network of weather enclosures where observations are taken hourly, daily or monthly. The Environment Agencies share their rain gauge data alongside the Met Office gauges. Some of the records, such as those in Botanical Gardens go back a long time. The Stevenson screen was introduced in the 1860s. The slated box is at least 1.5m off the ground, takes the air temperature in the shade and gives some consistency to the incoming data. As a result, observations from before 1865 are not included, nor stations above 500m Above Mean Sea Level (AMSL).

So your own weather station or garden thermometer reading won’t count, your car dashboard display definitely won’t and the official readings are quality controlled, not just taken in isolation. They are compared with other data nearby, the radar imagery and sometimes investigated as was the case of the nearby ice-cream van exhaust at Strathclyde Country Park in 2018. 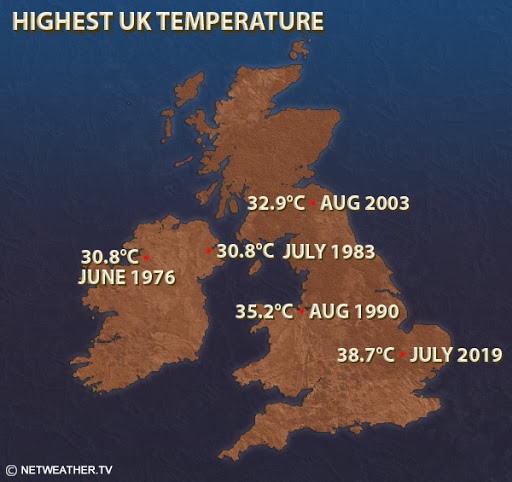 2022 saw an astonishing summer with extreme heat and lack of rainfall. Several stations passed 40C for the first time on UK record and a top temperature of 40.3C has now been verified.

Summers of heat and drought that stand out will be 1976/77.  August 2003 when Faversham in Kent reached 38.5C (101.3F) on the 10th, a UK record that stood for nearly 16 years. And 2018, with heat and little rain which seemed crazy after the March Beast from the East snow. However, it was July 2019 that produced the current UK record for the highest temperature. 38.7C (101.7F) at Cambridge Uni Botanic Garden on the 25th July. The UK very rarely sees over 100F, there had been travel chaos on railways and at airports and intense thunderstorms in previous days as records fell across Europe that week.

Temperatures didn't fall below 20.9°C in Achnagart in Highland on the night of the 25th July 2019, breaking the Scottish record for the highest minimum temperature as Edinburgh recorded its hottest day ever at 31.6C. The 2022 highest minimum at Nunraw, East Lothian was later discounted after quality control processes.

At other times of the year, the UK can see exceptionally high temperatures often in brisk SW winds thanks to the Foehn Effect. The UK's highest Dec daily temp of 18.7C occurred at Achfary in Highland, further north than Achnagart. 18.7C in late spring would  be  a warm day for northern Scotland, never mind December   “The exceptionally high temperatures across the far north-west of Scotland were due to an ‘isentropic drawdown’ Foehn effect with pre-existing very warm air higher in the atmosphere mixing down to ground level.” Met Office

“Centred a few miles west of Dorchester, where the rainfall was the greatest ever recorded in the British Isles in a single rainfall day. The greatest fall was the 11 inches measured by Mr. Symonds of Martinstown, though there is good reason to believe that the centre of the storm was near Winterborne Steepleton where the fall may possibly have been as much as 12 inches.” Paxman

Rainfall can be caused or enhanced by uplift over hills and mountains, Cumbria is especially prone to this, as is inland Wales, geographic rain.  Weather fronts moving in on low pressures account for much of our wet weather, cyclonic rain and there is convective rain as air rises due to heating creating showers and sometimes thunderstorms. Frontal cyclonic rain which gets stuck and continues to 'conveyor belt' in from the west, combined with orographic uplift over hills can lead to the largest totals over several days. Like in Storm Desmond for Cumbria. Warnings from the UK Met Office and Environment Agencies, now in conjunction with the Name our Storms projects mean that these events should be well prepared for. Convective rain can give sudden flash flooding lacking in precise location detail within a wider warning area. Local conditions and topography can lead to devastating flood events.

Other rainfall statistics for the United Kingdom 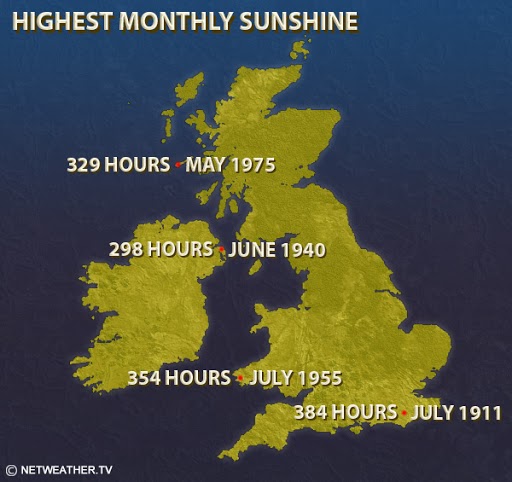 Mean daily sunshine figures reach a maximum in May or June, and are at their lowest in December. The key factor is, of course, the variation in the length of the day through the year, but wind and cloud play their part as well. 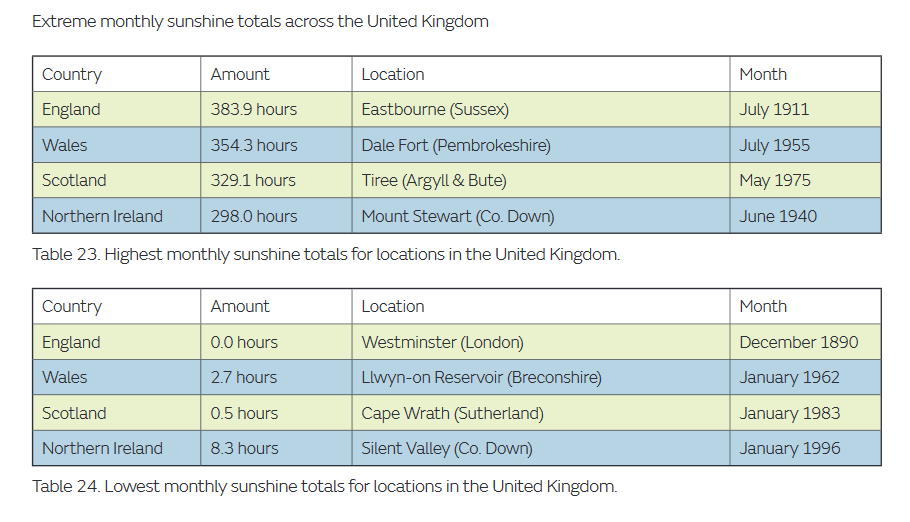 “The heaviest hailstone officially recorded in Britain fell from a storm which tracked 150 km from West Wittering (West Sussex) to Maldon (Essex) on September 5, 1958 - the stone, which fell on Horsham (Sussex), weighed 190 g. However, descriptions from older accounts which do not usually quote weights clearly indicate that significantly heavier stones have fallen in Britain (even when suspected exaggeration is taken into account). In the great Somerset hailstorm of 15 July 1808, many were reported as weighing over 220 g.” TORRO

A wind gust is a sudden, temporary burst. The ongoing mean or average speed will be lower. These are low-level sites, so exclude mountainous sites where winds could be higher. 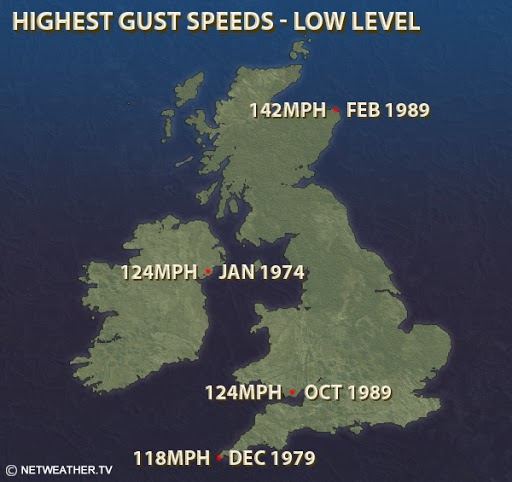 In 2020 the UK has seen pressure over 1050hPa which is very unusual. “High pressure has brought dry weather across the UK this weekend and will continue over the next few days. This has been an intense area of high pressure reaching 1050.5hPa on Sunday evening at Mumbles Head, south Wales. We don’t see over 1050 very often in the UK. The last time was in 1957. It doesn’t particularly mean much, day to day for our weather but if you like your weather stats, it’s a tick in a box. “

And again in March, 1051.2 hPa in South Uist, Scotland, also set a record for the month of March and will go down as one of the United Kingdom’s highest air pressure readings ever recorded during any month.

We see records broken around the world each month with global temperatures rising due to climate change. The WMO, World Meteorological Organisation noted early in 2019 that the past four years had been the warmest on record. By Dec 2019 “The long-term temperature trend is far more important than the ranking of individual years, and that trend is an upward one “ said WMO Secretary-General Petteri Taalas. “The 20 warmest years on record have been in the past 22 years. The degree of warming during the past four years has been exceptional, both on land and in the ocean.”

“Temperatures are only part of the story. Extreme and high impact weather affected many countries and millions of people. Many of the extreme weather events are consistent with what we expect from a changing climate. This is a reality we need to face up to. Greenhouse gas emission reduction and climate adaptation measures should be a top global priority,” said Mr Taalas.

Who takes the official weather observations and how?

WMO State of the Global Climate 2019