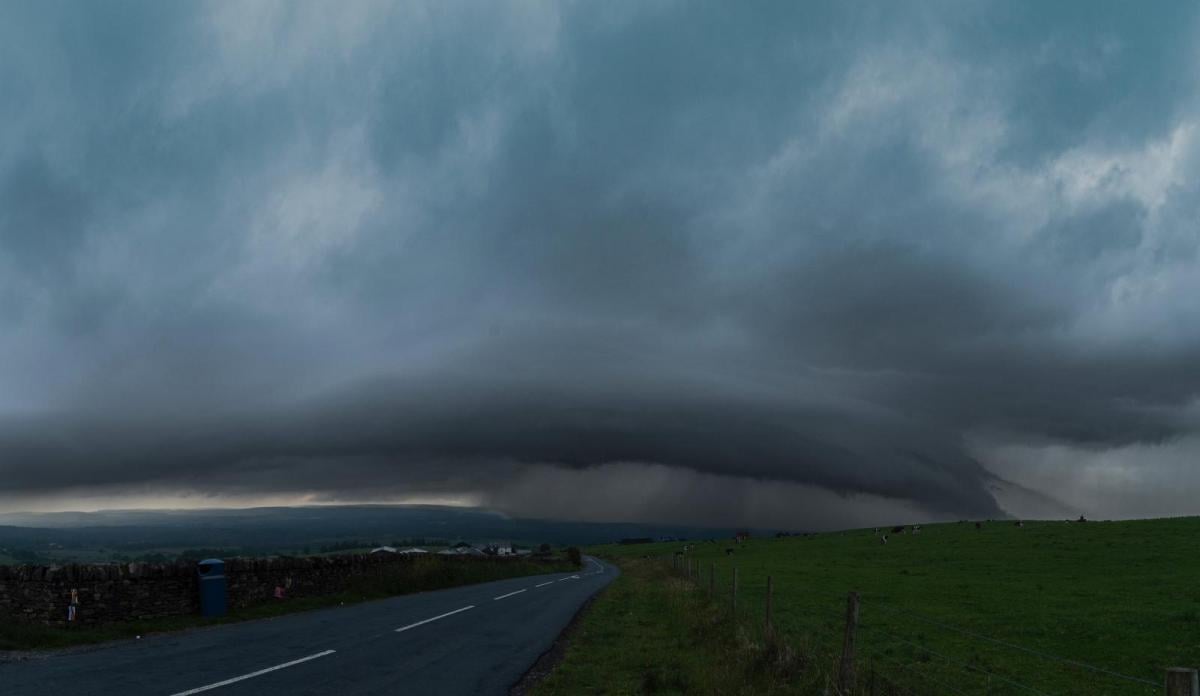 Storm Chasing UK style in a summer without transatlantic flights

Mid-June has seen some stunning convective action across the UK. There have been widespread thunderstorms drifting northwards with torrential downpours, flooding, lightning, hail and some super cloudscapes along with funnel clouds, even tornadoes. By this time of year, the US storm chasing season would be well underway and several of the Weather Holiday tours would have taken place with drivers, friends, year on year chasers setting off and new attendees heading out for the first time.  Any storm action closer to home might be considered a small bonus.

There have been funnels clouds this week(even possible tornadoes) in North and West Yorkshire. Also for Co. Down, South Lanarkshire and from the huge storm near Manchester on Monday evening. Also a water spout for Netley in Hampshire. Instead of the American plains, some of the usual Netweather crew have been admiring the UK storms, even venturing out chasing and recording.

Nick Finnis writes the UK and Ireland Netweather convective forecasts and often is a tour driver.

"Both seasoned storm chasers and those new to storm chasing in the USA, would've been flying over the Atlantic this week to join Weather Holidays 2020 Storm Chasing photography tour. Others would have been returning to the UK from Tour 4  Alas, Covid-19 has put a stop to this, the highlight of the year for many attendees.

However, as perhaps small compensation, but by no means a substitute for the totally different scale of storms witnessed in the US, the past week has seen its fair share of thunderstorms across many parts of the UK. Particularly active on Monday 15th across NW England and Tuesday 16th across the Midlands. For me, in London, Wednesday was the stormy highlight of the week, with a local chase through SE London to NW Kent to intercept rapidly developing storms and driving through intense rain, marble size hail covering everything and lots of lightning."

Tour lead, Paul Botten usually spends weeks out in the US and briefly into Canada. I asked him how he felt as the pandemic restrictions took hold.

"The best way to say how I was feeling was like a child at Christmas having all their presents taken away. Having been chasing out there for 17 years and knowing how slow the UK storm seasons have been over the last 10-20 years, with little chance of seeing a supercell, it made me moody."

However, spirits were lifted as the thunderstorm action livened up and dramatic shelf clouds, lightning and hail storms appeared.

"With the USA/Canada and Arizona Seasons being cancelled, all eyes are on the UK Storm Season instead. A pattern very similar to June 2016 presented itself in June with a trough stuck out to the SW of the United Kingdom pumping up moisture and humidity from continental Europe by way of SE Flow. In these setups, rounds of storms initiate each day by way of sea breeze and convergence zones(CZ) as well as orographic lift along boundaries such as the North and South Downs, Chilterns, Cotswolds, Welsh Hills, Pennines and the Peak District. Areas favoured are the Midlands and North West primarily as storms mature from CZ lines and move from SE to NW with most the coasts staying dry due to sea breezes actually killing off the storms as they approach.

My part of SE Essex has seen no showers at all in this spell nor heard any thunder but places 25 miles away have been continually hit. I did chase in the UK on one of those days around the East Midlands and western part of East Anglia and documented some really nice slow loving storms which produced some nice structure and lot of CG lightning (Cloud to Ground). I also captured a funnel cloud from a storm that was still in Kent across the estuary from SE Essex on Wednesday 17th. "

The Greater Manchester storm from Monday 15th with supercell like structure brought torrential rain and spectacular lightning shows. Roads were shut as flooding occurred and there was damage to Asda roof in Rochdale as more storms appeared the next day adding to the existing standing water.  Water gushed through the Galleries shopping centre in Wigan, not long re-opened after lockdown. 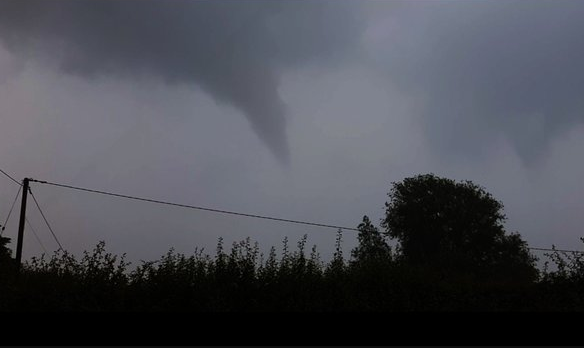 Mike Upjohn who has been chasing with Netweather since 2015 managed to film a funnel cloud in Cheshire on Monday 15th. As the funnel stayed up in the air, without contacting the ground, it is not classified as a tornado. "It lasted about 4 minutes and didn't quite touch down but it was close"

And is Mike missing this season?

"For me, chasing with Netweather, being in the "theatre of dreams" as Paul Botten calls it, is like my Christmas each year. I love it and was due to head out in May but totally respect why they cancelled and it was the right thing to do. Chasing in the UK is a second-best to scratch that itch, and having never chased solo, the UK seemed the place to start, no monster tornado coming at you.

It's frustrating chasing here with twisty roads and slower speed limits, it doesn't really suit chasing compared with the US with gridiron roads and flat plains. That said, I was so happy when I caught a funnel, by trying to understand what the storms were doing on Monday rather than just getting lucky and that I attribute back to Paul and the Weather Holidays team who not only just take us chasing, but take time, hours, to explain how the storms work and what the signs of tornadoes and severe weather are. I'd do it again in the UK as it means I got some storms this spring, but I'd always take chasing in the US if I could!

Another regular storm Chaser Ed O'Toole has had a quieter few months from his usual dentistry work and been missing his US trip.

"This year I was meant to be storm chasing in the USA in June, but alas it was not to happen with the Covid outbreak. Even though storm chasing is my passion, it seemed churlish to complain with so many people succumbing to the virus. A week ago, the weather prediction computer models hinted that the UK may see some storm activity and my ears instantly pricked up, could I chase in this country? We are unlikely to see the great supercell storms of the plains with accompanying tornadoes, but a storm is a storm!

So I have managed to chase on three days in the last two weeks, twice by myself and once with a fellow ‘bubble buddy’. And the storms which developed have been closer to traditional USA storms, rather than those usually seen in this country. I have witnessed rotating clouds, hail, thunder, lightning, some incredible torrential rain and the flooding that ensues. Battling with hedgerows obscuring visibility, poor and crowded road networks and more undulating landscapes UK storms may quite not live up to those in the USA but witnessing powerful storms at home can still be an awesome spectacle. And what makes it better? The USA has had a very quiet season so far this year, and it is very unlikely that I would have seen a tornado had I been there. So, I’m not grumbling."

And when a lull in the convective action takes over once more? Paul B has found another "chase" potential which has already been active this summer season.

"What I have had time to see this year are the incredible Noctilucent Clouds (NLCs). Noctilucent season (end of May through June, July) has given me something to focus on but it’s not for the faint-hearted and the hours are gruesome with the best displays I have found are between 1am and 330am.  Even so, I’ve managed 4 rounds of NLCs when the night skies have been clear so if people want to do that when convection and storms die down, I would recommend, it has been fun." 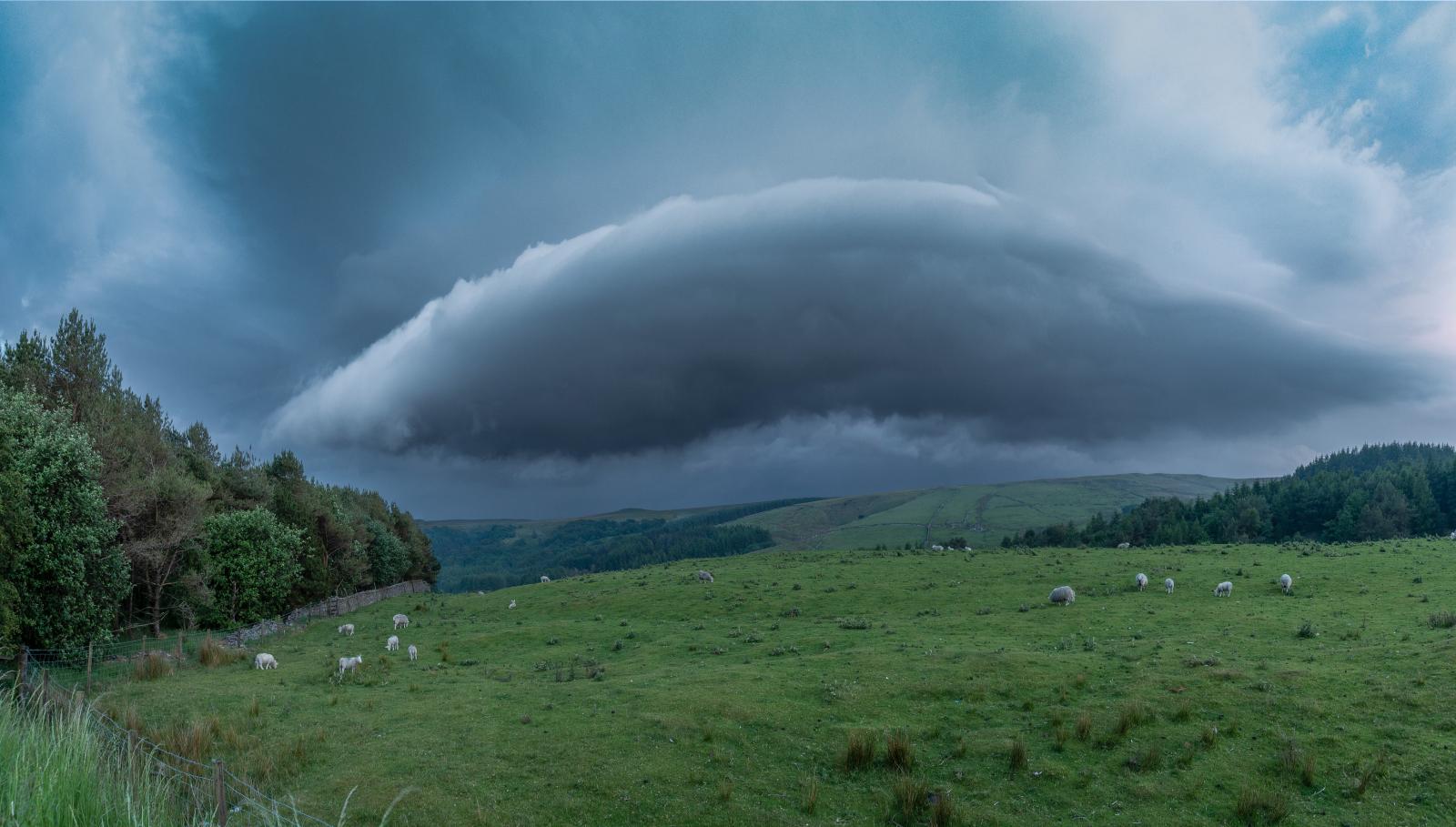 Graham Moore is usually a tour driver and should have been returning from the US this weekend, he's looking at the schedule for next year, with fingers crossed. And maybe Paul will get his Christmas presents finally.

What is it like on a Storm Chasing tour?