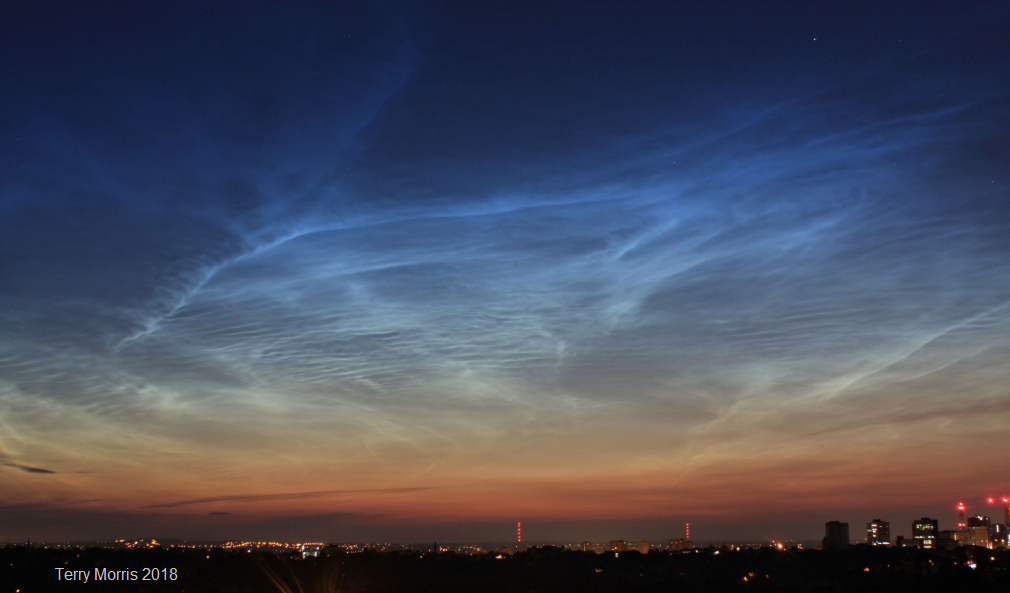 What are Noctilucent clouds? Also known as NLCs or Polar Mesospheric Clouds PMCs

Noctilucent clouds are beautiful, eerie looking clouds that form high up in our atmosphere. They were rare but observations seem to be increasing. Only available in the summer months and seen during twilight hours. They can only be observed at higher latitudes, which does include the UK. These mysterious, “night-shining” clouds are elusive, yet they do usually appear each year. To catch sight of them, conditions need to be right and you need to be awake at slightly odd times to see them, late or early in the day.

This blog will look at what Noctilucent clouds are and how they form. When you can see them, how to forecast them, the latest scientific research in space and how to report your sightings. #NLCnow

They look like white or silver, even blue waves or wisps. Because they are so high up, they catch the sun's rays when the lower atmosphere and ground level is in near darkness. The usual season for spotting noctilucent clouds is later in May and through June, July and well into August. It's starting now.

A definition of Noctilucent Clouds (NLCs)

“Clouds resembling wispy Cirrus, but usually with a bluish or silvery colour; they stand out against the dark night sky well past summer sunset because they are in the mesosphere.” WMO Cloud Atlas

These clouds are much higher than our usual everyday weather clouds which occur in the lowest section of our atmosphere, the troposphere. The name Noctilucent is linked to the Latin for night-shining and that is what is unusual about them, that they are lit up at night. NoctiLucent Clouds can be abbreviated to NLCs. They are also called Polar Mesospheric Clouds (PMCs), when looking from space. 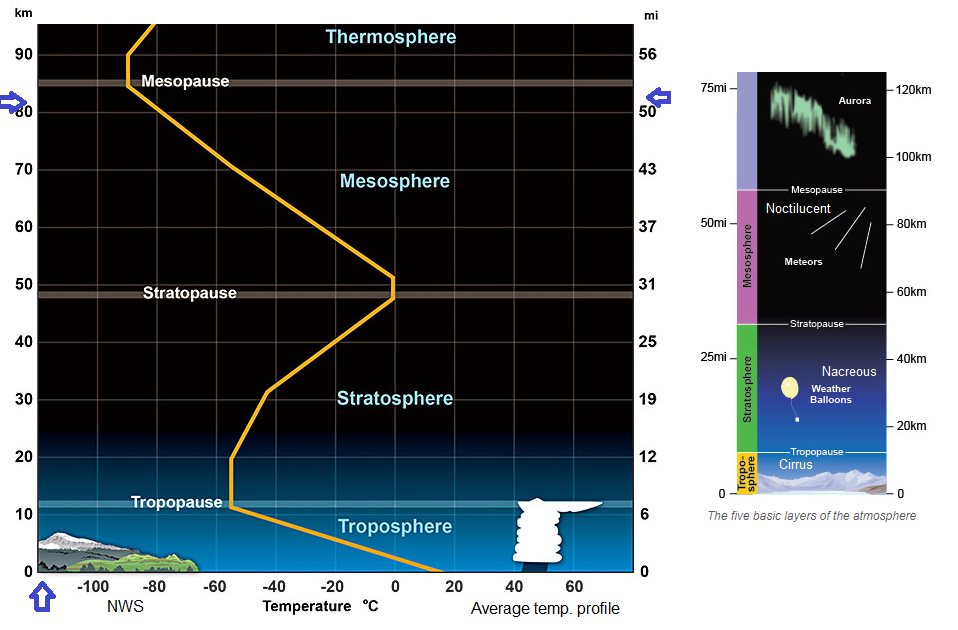 In-between is the Stratosphere, a key area for Sudden Stratospheric Warming (SSW) which led to the Beast from the East snow event in 2018 and can also produce other special rare clouds known as Nacreous Clouds. These NLCs are much higher.

Usually, the highest clouds you see are icy Cirrus clouds, which are around by day at about 10km up. These can be linked to surface weather fronts or just fair weather. The Polar Mesospheric Clouds are much higher, around 83km and are made of minute ice crystals. 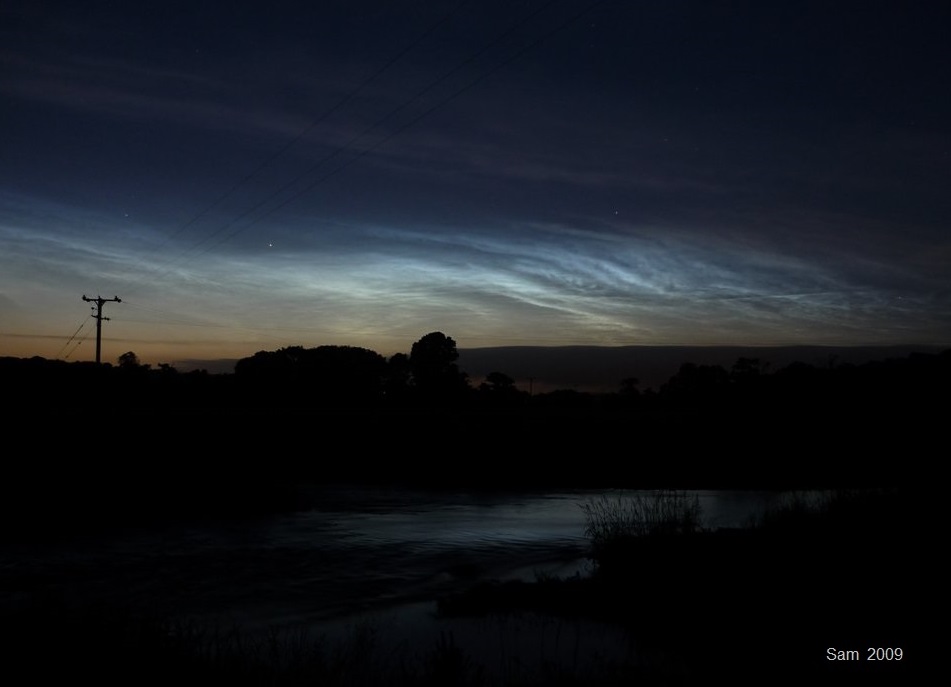 When can you see Noctilucent clouds?

The mesosphere has to become much colder for Noctilucent clouds to form. This happens in the summer months. mid-May until about August.  You'll need to look poleward (North) as they do appear above the Arctic circle. It’s not that simple as they are not always visible. Recent research has found that the clouds do appear each day somewhere and will be widespread around the high latitudes but that they vary a lot.

Nautical twilight is a good time to look but later can work too. Generally about an hour or two after sunset or before sunrise. Officially, when the sun is between 6-12 degrees below the horizon, when the sea horizon fades from view against the background of the sky. 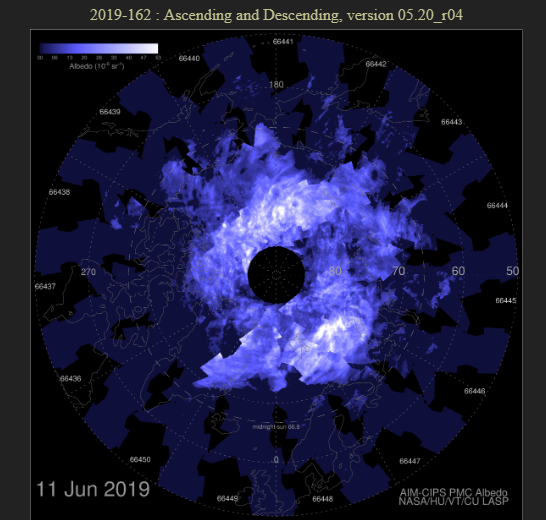 AIM Daisy chart - This image is centred on the North Pole, UK is at the bottom, and is from a night when NLCs were reported from many parts of the UK (June 2009). The white areas show clouds with ice particles. The brighter the clouds, the denser the ice particles, which are reflecting sunlight.

What to look for: First that temperatures in the mesosphere drop below -120C. Noctilucent clouds only appear during the summer when the mesosphere is coldest. There also has to be some water vapour content for the ice crystals to form.

Below is an example from the IAP, a German centre for Middle Atmosphere research, including trends and exploration in the mesosphere. 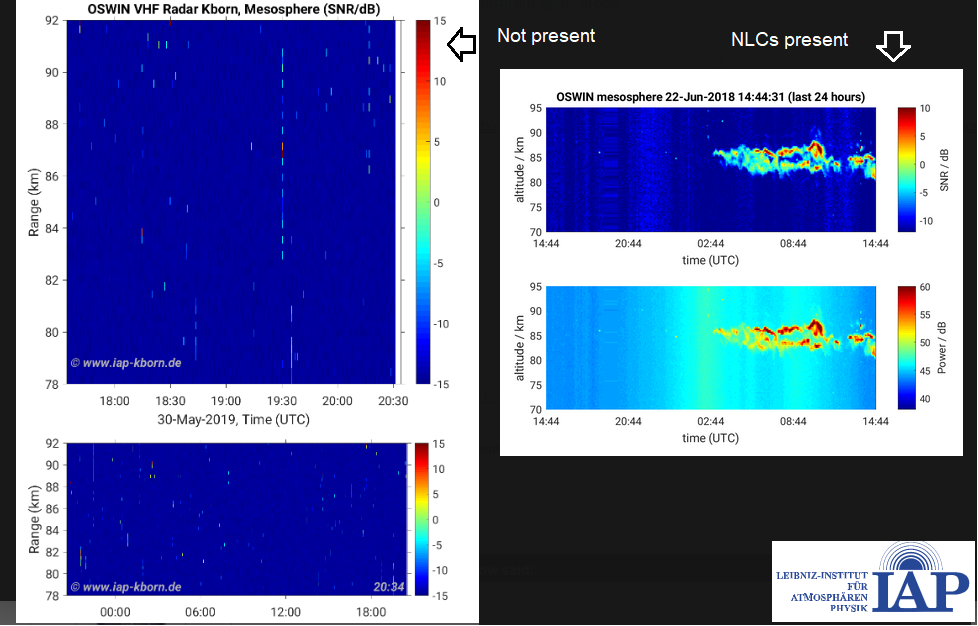 Gathering suitable charts is tricky and most of the time it’s a case of just having a look at the sky once you hear that the NLCs are on the go, as long as the local conditions are clear. Just reacting to other observations that night. If you begin to watch the AIM daisy charts centred on the North pole, you will see how much the white pattern jumps about each day. Some of the chart output has a lag so you only see it two days later. No good for a forecast. 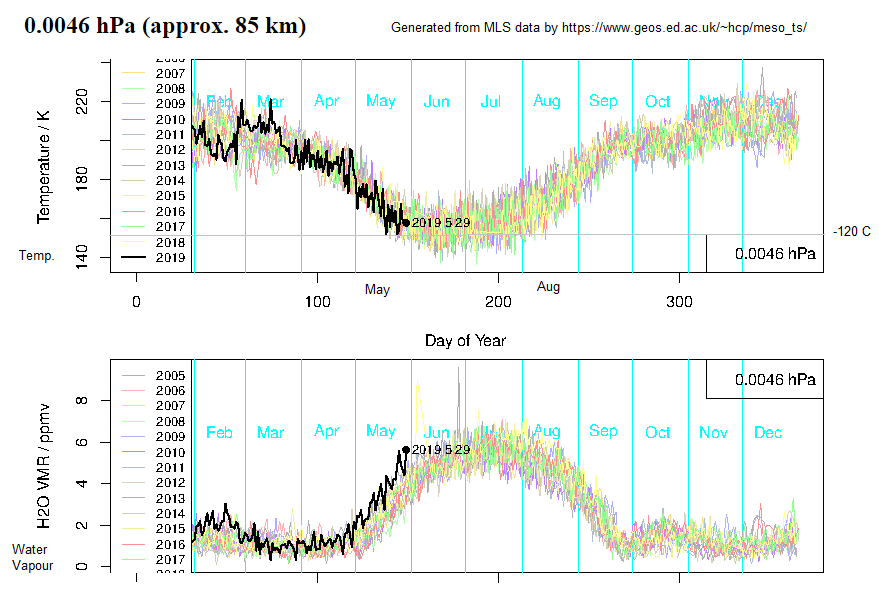 In general, the temperature has to be low and the water content high for NLC formation. This is, however, a predictor rather than an absolute measure

Some disturbance is needed to get moisture into this high part of the atmosphere and then tiny nuclei particles, such as meteor dust, maybe volcanic dust or space exhaust fumes, are needed to allow condensation to form the clouds. There has to be some moisture way up in the drier mesosphere, this can be pushed upwards by gravity waves. If the mesosphere becomes even colder and there is more water vapour, then the clouds will be brighter and more active.  There is still plenty of mystery and questions around these clouds but there is plenty of research going on.

Even if all of these conditions occur, it’s like aurora spotting, we need clear skies at the surface to actually view the upper skies. These tiny ice crystals are shimmering and waving at the edge of space, light up by the low angle sun. To see them you will need to be looking north (in the UK) in the twilight after dusk or before dawn when the sun is below the horizon but still able to reflect off the ice way up in the atmosphere. But when they appear, they are superb. 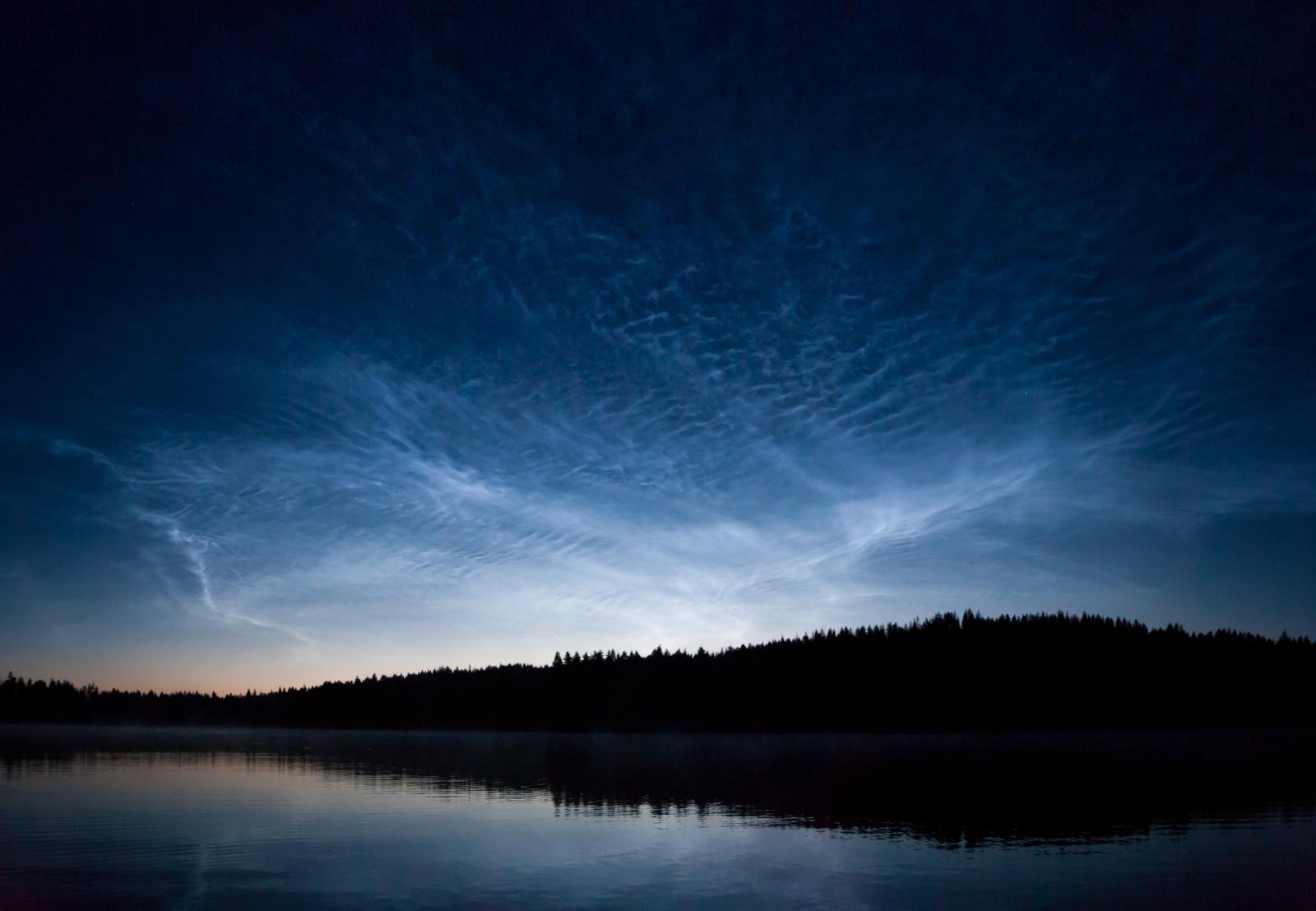 In recent decades, Noctilucent clouds have been appearing at slightly lower latitudes, been brighter in the skies and appeared more often. Research is looking at a link to solar activity, with less activity seeming to result in more clouds. That they are becoming brighter could be linked to greenhouse gases such as methane and CO2 (DeLand NASA).

US scientists are wondering if increased NLC incidence could be a sign of climate change. Recent data from the NASA project AIM indicates this might be an option. These clouds seem to be affected by global climate change, solar cycles and influences from other parts of the earth’s atmosphere. Not only are they a beautiful, mesmerising phenomenon, but they could also be an intriguing indicator of larger processes around our planet.

AIM is a NASA research mission, Aeronomy of Ice in the Mesosphere, with a satellite that was designed to study noctilucent clouds. They watch for the PMCs and monitor how different the seasons are. For example, 2013 started early, 2017 after initial hints, the mesosphere warmed up and there wasn’t anything for the first half of June. For 2019, the first sighting by NASA's AIM spacecraft was on May 20th,

“small wisps of electric blue have since multiplied in areal coverage by a factor of nearly 200. Previous data from AIM have shown that NLCs are like a great geophysical light bulb. They turn on every year in late spring, reaching almost full intensity over a period of 10 days.”

Aeronomy is the scientific study of the upper atmospheric regions of the Earth. AIM started in 2007 and has begun to record changes in the PMCs formation each year, look at why they might vary by taking images and investigate if there is a connection to climate change. These were the first global images of the clouds.

“AIM's detailed images of the clouds have enabled researchers to look at even day-to-day variability. They've spotted a 3 to10 day time lag between low-lying weather events in the northern hemisphere,” such as larger oscillations over mountainous Scandinavia

“When we launched AIM, our interest was in the clouds themselves, but now NLCs are teaching us about connections between different layers of the atmosphere that operate over great distances. Our ability to study these connections will surely lead to a new understanding of how our atmosphere works.”

NASA also supports the PoSSUM project, a program training astronauts to study climate change through Noctilucent clouds. The PoSSUM mission is looking at fluctuations in solar activity alongside man-made changes and what is happening in the atmosphere. They investigate, observe and record Noctilucent cloud structures using a research aircraft and a high altitude balloon. It’s like reading something from the future, or a sci-fi film.

All of this is a bit high tech and futuristic, so back down to earth for us cloud spotters and the Instagrammers #NLCs

It can be tricky to decide if you are seeing NCLs. High cirrus can look similar but if you look through binoculars you will see the fine detail, streaks and knots in the Noctilucent clouds. Also, were cirrus clouds there by day? Is that just fading daylight in the distance or interesting clouds? Sometimes the sky is stunning and it’s obvious, other times the view is a bit more diffuse. You can follow others or alerts, as with the Aurora but it’s a late or early time investment for your day. 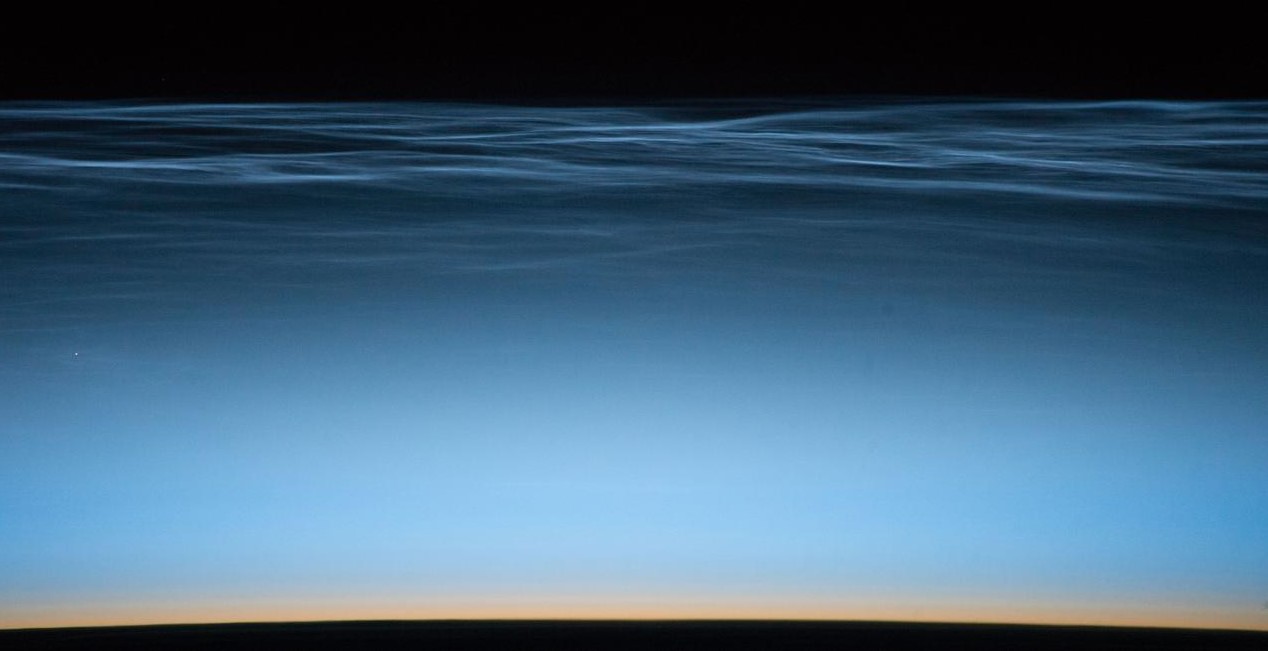 "PMCs from S.Pacific Ocean. The ground is in darkness but the high ice clouds, way up in the mesosphere, are still illuminated, night-shining. The orange band is the stratosphere." NASA

Can I report my NLC sighting?

That’s what social media is all about. If you share your sighting and photos, then others may have a peek outside too. Or just be annoyed in the morning that they missed it all. #NLCnow #NLCalerts #NLCs #NoctilucentClouds

Useful tips – Dates: Use both dates, that is the convention e.g. June 11-12, so June 11th evening and early morning of June 12th, regardless of which portion you saw anything.
Time: Use UTC/GMT or Z (Zulu) This really helps on Twitter. If someone says "ooh, I saw Noctilucent clouds at 2315Z" and they are in Denmark, you can work out if you have missed it, or this is happening now and it's worth having a look. Adjust for British Summer Time (BST, take off an hour) and state that it's GMT.
Location: Where you are is important. If something is being observed in Shetland that’s less hopeful for most of the UK than a sighting in Norfolk.
In addition, there are lots of Types for defining the structures and also a Brightness scale. More details here along with some Noctilucent photography tips.

There are indications that Noctilucent clouds sometimes intensify during a solar minimum. That’s where we are now so with clear skies let’s hope we get stunning views this summer.
Update - There is a thread in the Netweather community forum for Noctilucent cloud Season 2021, more photos and chat. 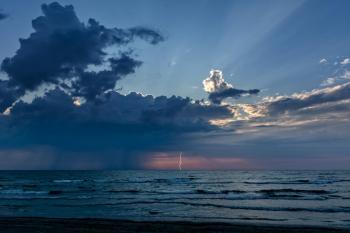