Netweather
Latest - Fresher this weekend, but with thundery showers for northern and western areas

The Jetstream and The Weather in the UK

In order to understand the jet stream you need to have some idea of what is occurring in the atmosphere nearest the ground; known as the troposphere. It is also helpful to understand the formation of Hadley, Ferrel and Polar cells and how The Coriolis Effect influences these tropospheric cells. The jet stream flows in both hemispheres around the earth, but for ease this article will consider the Northern Hemisphere only.

Remove Ads?
Remove Ads?
The jet stream is a strong flowing ribbon of air that flows around our planet high up in the atmosphere, at around the level of the tropopause. Situated between the troposphere and the stratosphere, the Jet Stream is approximately 11 kilometres above the surface of the Earth at the poles and around 17 kilometres above the surface of the Earth at the equator. The jet stream flows at around 160kmph (100mph). We often hear that the jet stream is responsible for influencing the weather in the UK, so it is natural to wonder what causes the jet stream and why it has such an influence on the weather we experience on the ground.

Jet streams form and are strongest where variable air temperature gradients are steepest. This is normally seen in two zones: Both these jets are separate entities but they can join up from time to time across an area of the earth. The polar jet is the strongest as the temperature gradient across Polar and mid latitude regions is greatest. This is increased again in the Northern Hemisphere during winter. Both the subtropical jet and the polar jet travel from west to east and both would travel uniformly and evenly around the earth if it wasn.t for other influencing factors.

See Fig 1. below for an example of a typical jet stream chart across the earth.
Typical JetStream 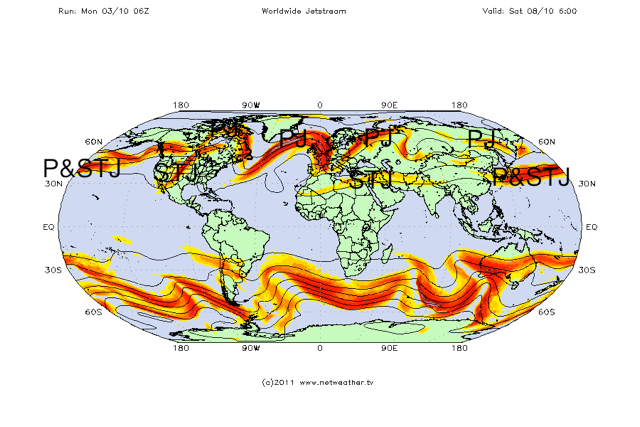 Click to enlarge
Fig 1: The jet stream is shown in red at its strongest point fading to yellow at its weakest. The STJ is the area where the subtropical jet is flowing, the PJ is an area where the polar jet flows and the P&STJ shows where the jet streams have combined. 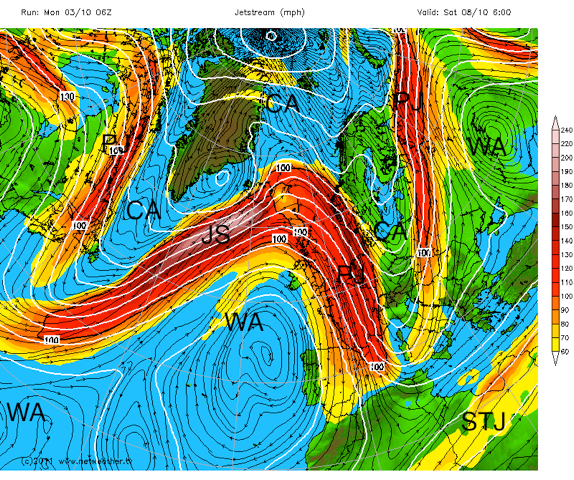 From Fig 2. you can see that the polar front jet meanders across the country in a wave like pattern. These waves introduce pockets of colder air southwards and warmer northwards. The temperature change is demonstrated by looking at the air temperature at a high enough altitude in the atmosphere, where ground and sea temperatures do not affect it .around 1500 metres in altitude where the air pressure is around 850 hPa.

Fig 3. shows how these temperatures match the fluctuations in the jet stream.
Jet + 850hpa Temps 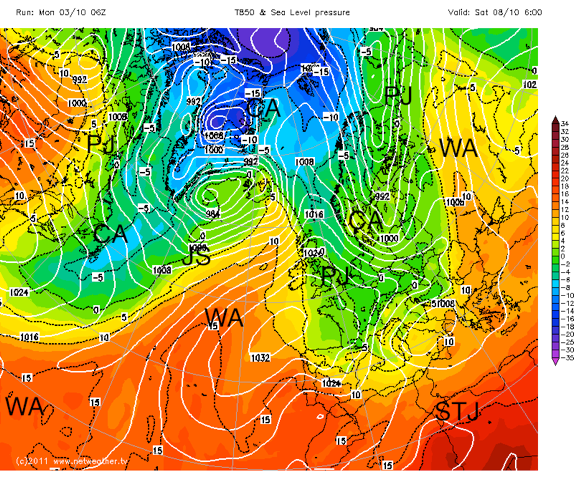 Click to enlarge
From looking at Fig 3 and the 850-hPA temperatures you can see the clear boundaries between the cold and warm air masses, which is being divided by the polar jet. You can also see the demarcation between warm and hot air that the sub tropical jet is demarcating. This demonstrates the pattern of the jet stream, showing how it is linked to and by the difference in warmer and cooler air masses.

Furthermore, looking back at FIG 2, the wave pattern associated with the polar jet has distinct peaks (ridges) and troughs. It is no surprise to find that when we overlay the jet stream with a chart showing sea level pressure, that the ridges occur where sea level pressure is highest and the troughs occur where sea level pressure is lowest (as FIG 4 demonstrates). This is because air rises where troughs are situated and sinks where ridges are occur. Rising and sinking parcels of air will therefore determine the type of weather that a region experiences.
Ridges and Troughs 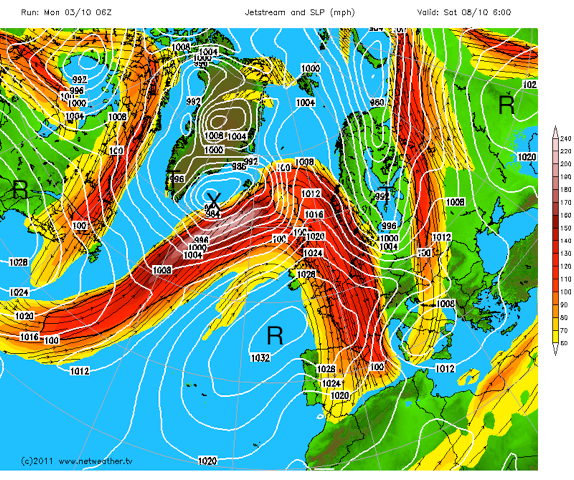 Look at the area X on Fig 4. which is situated towards the west of Iceland. This is a common cyclonic or baroclinic depression that is caused by the difference in pressure and temperature over a region. This is feeding strength to the jet stream, which is then invigorating the depression.

In contrast, Fig 5 shows the same chart from FIG 2. However, note the following points: The winds leaving the jet streak are rapidly diverging, creating a lower pressure at the upper level (tropopause) in the atmosphere. The air below rapidly replaces the upper outflowing winds. This in turn creates the low pressure at the surface (marked X on fig 4). This surface low pressure creates conditions where the surrounding surface winds rush inwards. The Coriolis effect creates the cyclonic rotation that is associated with depressions. The strongest surface winds in any developing depression are normally seen at the left exit point of the jet streak, where the jet streak is strongest.
Jetstreak 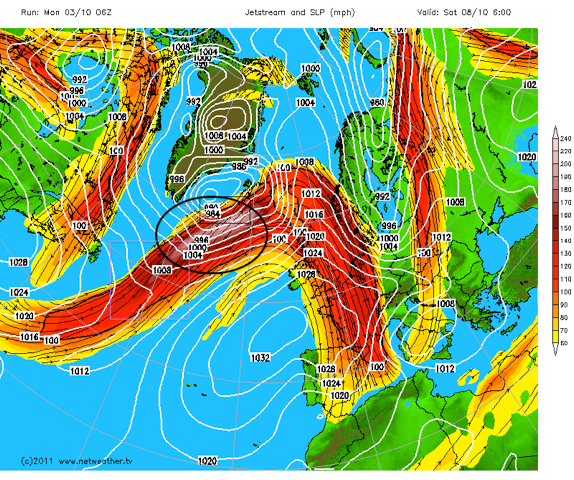 The positioning and strength of the jet stream determines where ridges and troughs are associated and this in turn influences the surface weather.

Zonality and Meridional flow.
During periods when the jet stream is flat and strong with little amplification or meandering, the UK is likely to experience weather that is driven straight in from the Atlantic. This is characterized by wet and windy weather with temperatures near to average. This condition is often termed .zonality. as the warm and cold air masses are clearly defined by a straight fast flowing jet.

During periods when the jet stream is amplified (such as Fig2) the pattern will be different. This is often termed meridional with polar air travelling further south than usual and warmer sub tropical air travelling further north. The exact positioning of the amplification of the jet stream will determine whether or not the UK is in cold polar air or warmer air from lower latitudes. If a meridional pattern becomes stagnant then the UK may experience either of these conditions for a period of time and the pattern may be known as .blocked..

Summary of the Jet Stream and the weather it creates: Article written by Ed O'Toole
View The Jetstream Forecast Here

Weekend Weather: Not as hot but still strong sunshine with showers from the west