Netweather
Latest - Heat is back for SE UK today, but lively thunderstorms loom for overnight

Firstly they look amazing but they don't appear very often here in the UK. They are very high in the sky and look like mother of pearl. They appear static and mysterious, sometimes against lower moving clouds. Conditions need to be right in the upper atmosphere for starters, a bit of moisture needs to be pushed upwards by surface perturbations to produce the clouds and then you need clearer skies at the surface to actually view them and for it to be the right time of day. Quite a list. 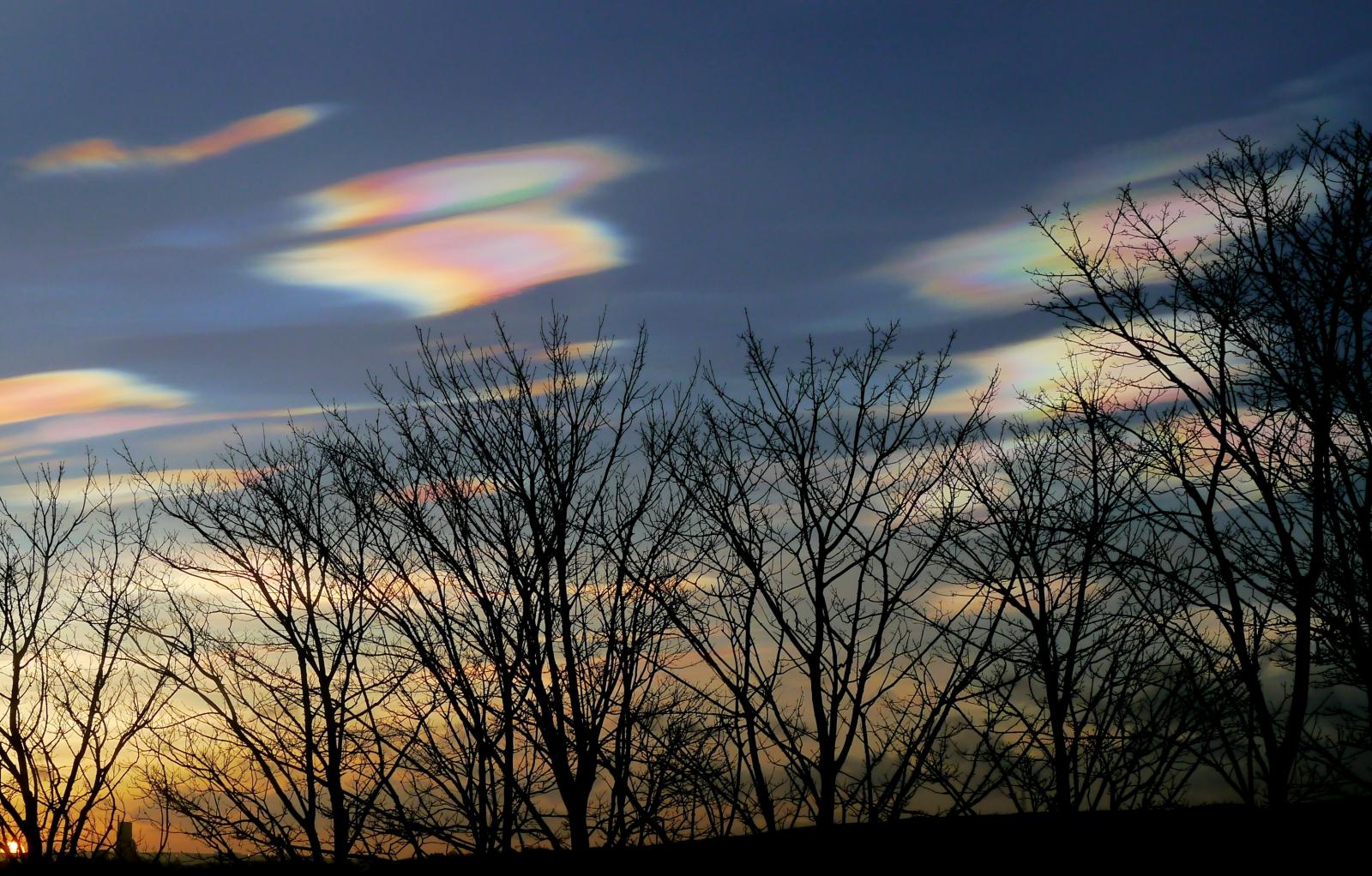 They are not here yet. The last major show was back in February 2016 when there was very cold air above us in the stratosphere. Currently the same, or even colder air is showing way up in the atmosphere on the 10hPa temperature charts. Different pressures such as 925hPa (nearer to the surface), 850hPa and 700hPa (higher in the troposphere)  are used for forecast charts such as winds or temperatures, going up through the atmosphere (1 hPa hectopascal = 1mb 1 millibar). In 2016, there were enough perturbations in the lower atmosphere (possibly linked to Storm Henry) that the unusual clouds appeared in our skies. The low pressures heading in from the Atlantic are all a bit lacklustre at the moment, remaining flat and not deepening rapidly. So it may be not enough low level action to get the moisture up into the dry, cold layer high up. Strong winds at the surface undulating over mountains can force the moisture up high. However, as we head towards Christmas the weather looks rather settled, with pressure rising. 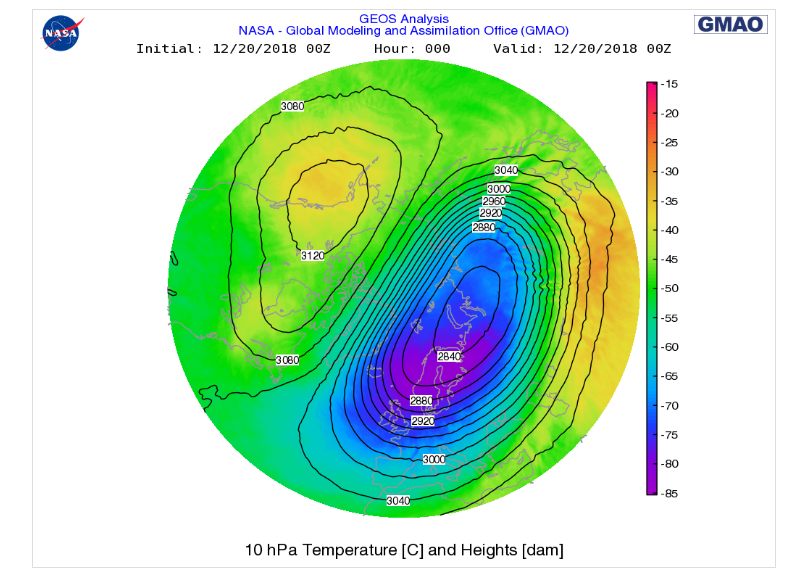 Nacreous Clouds or PSCs, ice Polar Stratospheric Clouds are usually easier to see in the Arctic but can appear in latitudes above 50°. London is 51.5 ° north, so it is possible to view these clouds from southern England, when they occur.

You can’t see them in the full light of day, it has to be sunrise or sunset or just after sunrise. The 2016 clouds were still visible a few hours after sunrise but they look most stunning when the sky is still slightly dark and the contrast makes them look magical. 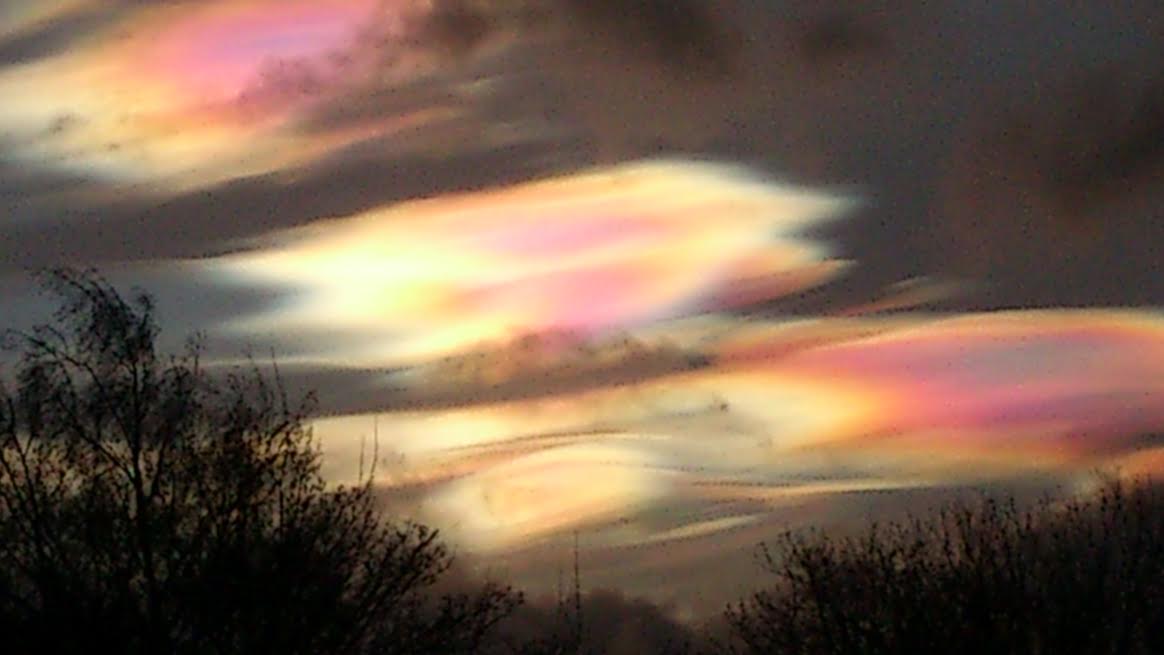 The ice crystals are small and contain nitric acid, being so high abover earth. The colours come from sunlight reflecting off the tiny crystals

These are a winter sky phenomenon and best spotted around twilight. The temperature in the stratosphere has to be below -80C. This air on its own isn’t enough, as it is cold and dry with no moisture for clouds. That is why it has to be in combination with undulations lower in the atmosphere, and why these aren’t seen very often.

Added to that you need clear skies at the surface to actually see the upper sky, like viewing any heavenly show; meteor shower, Aurora, eclipse, super moon or noctilucent clouds in summer.

They shouldn’t be mixed up with iridescence which can appear on more run of the mill high clouds in the middle of the day and at other times of the year. Irisation or iridescent colours are often brilliant on nacreous clouds, and resemble the colours observed on mother of pearl or oil on water. 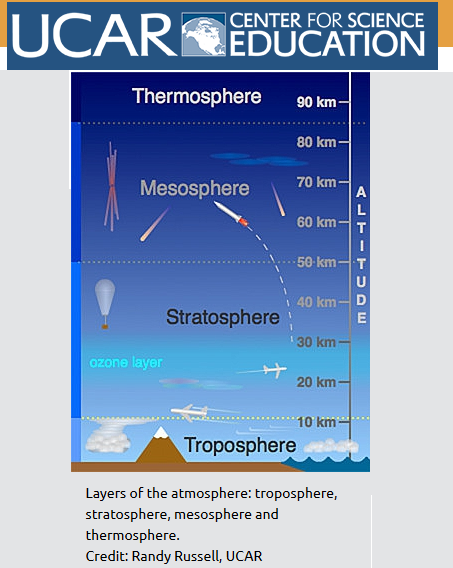 Beautiful as they may be, they are not good news for the ozone layer.

"Polar Stratospheric Clouds (PSCs) play a central role in the formation of the ozone hole in the Antarctic and Arctic. They provide surfaces for chemical reactions to take place, producing free radicals of chlorine in the stratosphere which directly destroy ozone molecules". Australian Govt Antarctic division.  NASA also commented that "PSCs remove nitrogen compounds that moderate the destructive impact of chlorine. In recent years, the atmosphere above the Arctic has been colder than usual, and polar stratospheric clouds have lasted into the spring. As a result, ozone levels have been decreasing."

So we will have to wait, not only for Christmas, but to see if these clouds will form. 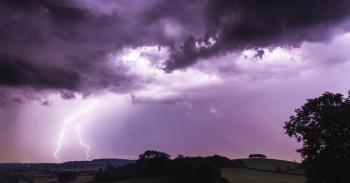 Heat is back for SE UK today, but lively thunderstorms loom for overnight