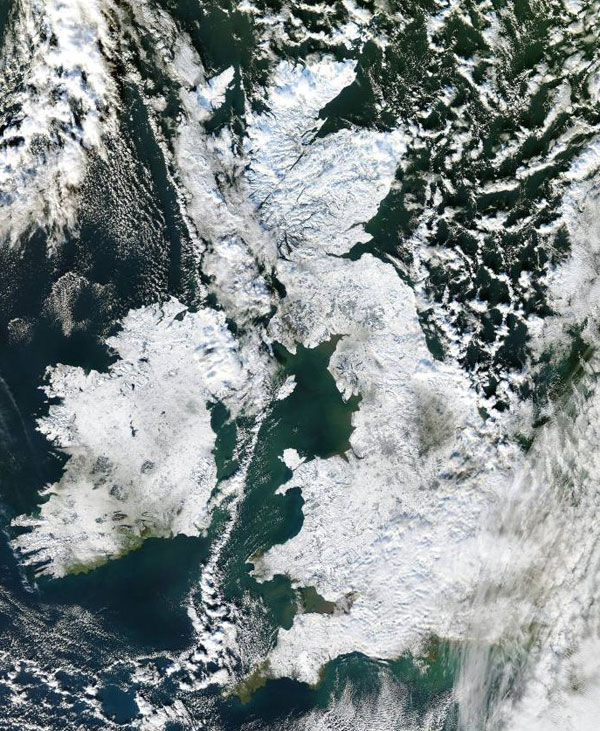 Over the decades December is probably the coldest month of the year only about 20% of the time and in more recent years, temperature-wise it’s been more like a continuation of autumn than a winter month.

However, 7 years ago today, the UK was in the grip of a severe cold and snowy spell with well below average temperatures. Although the cold relaxed mid-month, it returned with a vengeance until the last few days. This made December 2010 the coldest in 100 years, as far back as nationwide Met Office records go and the coldest of any winter month since February 1986. In the Central England Temperature (CET) series, which goes back much further, December 2010 was the coldest December since 1890. Mean temperatures that month were 5 °C below the 1971-2000 average.

The lowest minimum of that month was -21.3C at Altnaharra on the 2nd, followed by a day maximum temperature of only -14.0C! The lowest maximum of the month, -15.8C, was also recorded at Altnaharra, on the 22nd. 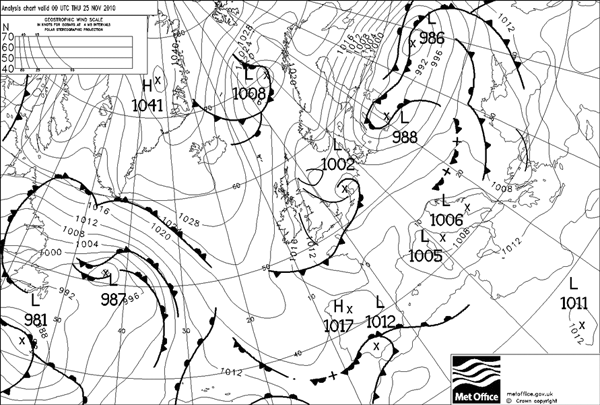 The severe cold set during late November 2010 and continued to around the 8th, with winds generally from the east or northeast, between high pressure to the north and northwest and low pressure over mainland Europe to the south, ushering in unusually cold air from NE Europe and NW Russia. 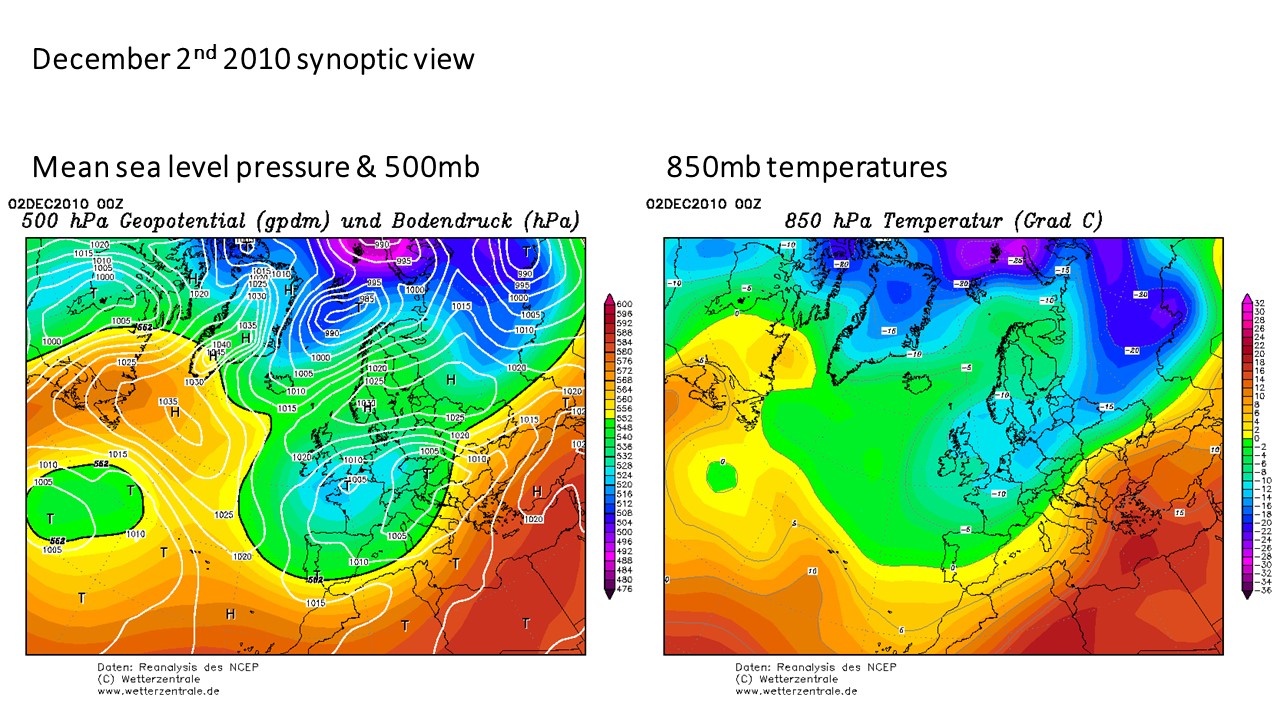 It became briefly less cold between the 9th and 15th, as winds turned northwesterly or westerly, bringing milder air in off the Atlantic.

The severe cold returned around the 16th, as high pressure over the Altantic built north across Greenland and Davis Strait, opening the door for bitterly cold air from the arctic to sweep south, then from the 20th winds become more northeasterly continuing bitterly cold conditions which lasted until the last few days of the month, when temperatures rose to around average. 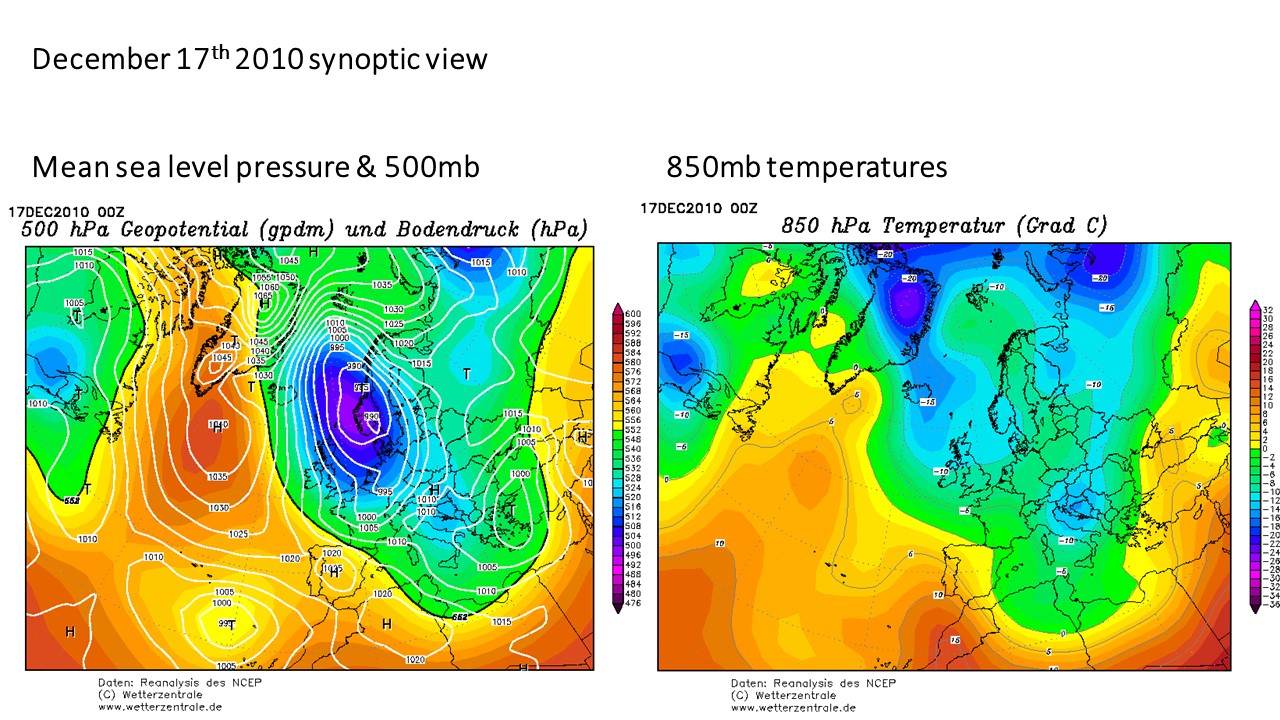 Much of the precipitation during December 2010 fell as snow, particularly during the 1st and 3rd weeks.

Highlights for cold and snow during December 2010 are listed below:

Frequent snow showers on the 1st and 2nd across eastern areas brought up to 25cm across parts of SE England.

Daytime temperatures between the 1st and 8th stayed widely below freezing, with a maxima of -7.9C at Carlisle on the 8th.

Overnight temperatures between 1st and 8th fell below -10C across northern and western areas, with -19.5C recorded at Redesdale Camp in Northumberland and -12.9C at Sennybridge in Powys, Wales both early in the morning of the 3rd.

Disruptive snow moved across southern counties and heavy snow showers in the west on the 18th, followed by a very cold night over snow cover, with the temperature falling to -19.6C at Shawbury in Shropshire and -17.5C at Capel Curig, Conwy in north Wales.

Southwest England saw heavy snow on the 20th, with 10-15cm widely and up to 25cm locally, the snow also spread across south and mid-Wales and southern parts of England.

Snow showers to start the month in the north and east, over the snowfields Altnaharra fell to -21.3C on the morning of the 2nd, then the temperature rose to a high of -14.0C during the day.

Frequent heavy snow showers between the 6th and 8th across northern and eastern Scotland, Nunraw Abbey in East Lothian measured a depth of 54cm on the 7th, followed by very low temperatures over the snowfields, with Strathallan in Perthshire falling to -17.8C. 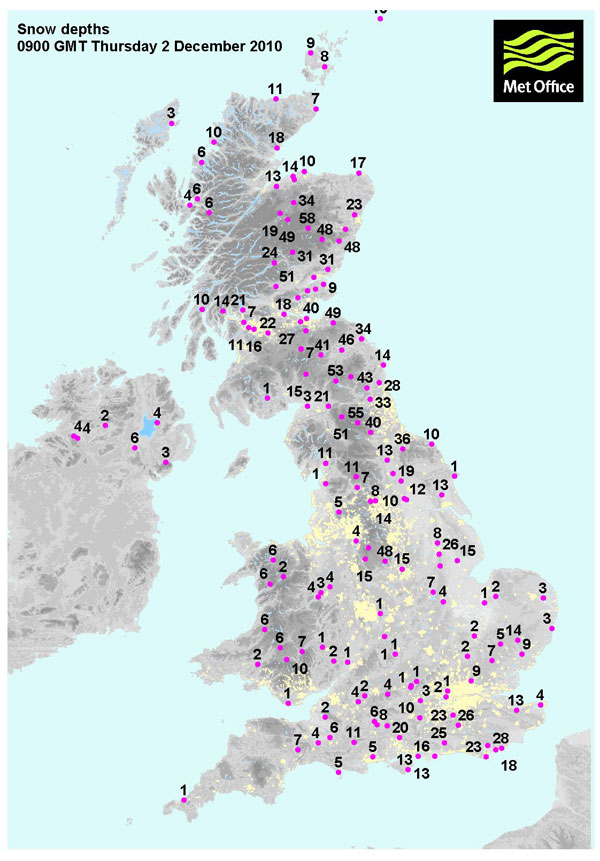 After less cold conditions between 9th and 15th, a bitterly cold northerly wind returned and persisted between 16th and 24th, bringing heavy snow showers at times.

The 22nd and 23rd were particularly cold days, with Aberdeen Airport recording a maximum temperature of -6.9C and Altnaharra -13.8C – which also recorded a low of -20.0C early on the 22nd.

Although wintry showers affected parts between the 1st and 8th, largest snowfall accumulations were in the 2nd cold spell from the 16th as strong northerly winds brought snow showers, by the 17th there were accumulations of 10-15cm widely and 20cm locally. 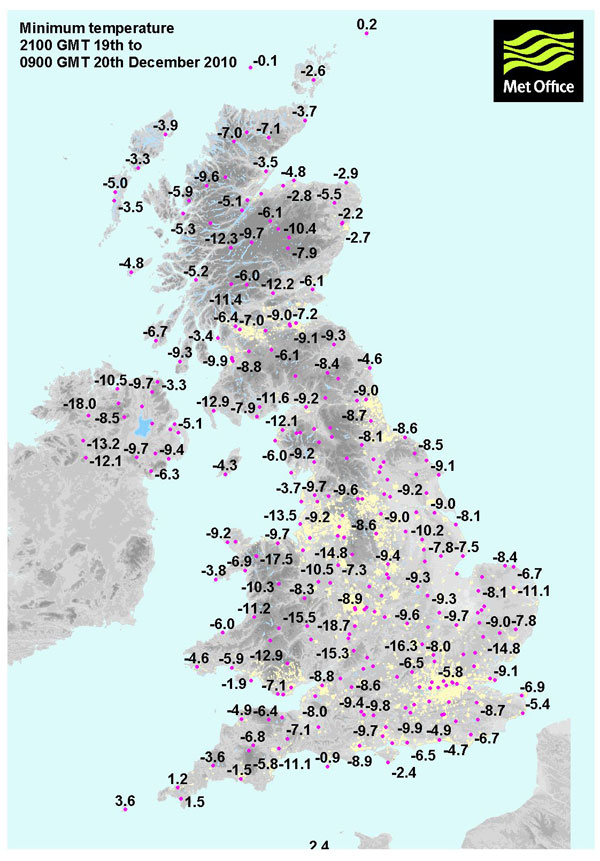 The 18th was exceptionally cold, with Castlederg recording a daytime maximum of just -11.0C, while on the morning of the 23rd, the same weather station recorded a low of -18.3C, setting a new record for N. Ireland.

More Links on the cold and snowy weather in December 2010: