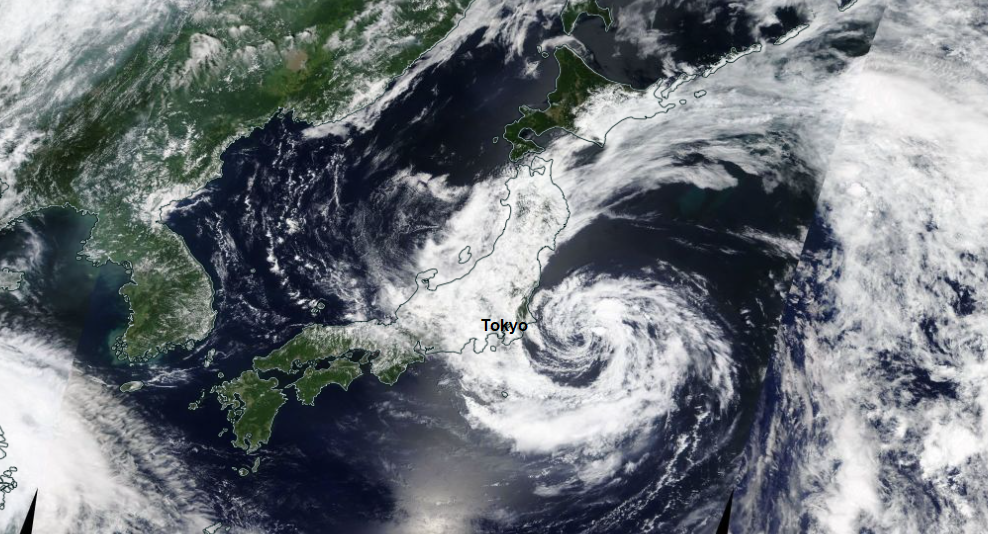 Tokyo 2020 has given the competitors and organisers a lot to deal with. There has been a year-long delay and huge uncertainty due to the COVID pandemic. Japanese summers bring heat and humidity which is impacting some of the events. And now there is an incoming cyclone Nepartak which is forecast to move across Japan on Tuesday, north of Tokyo. 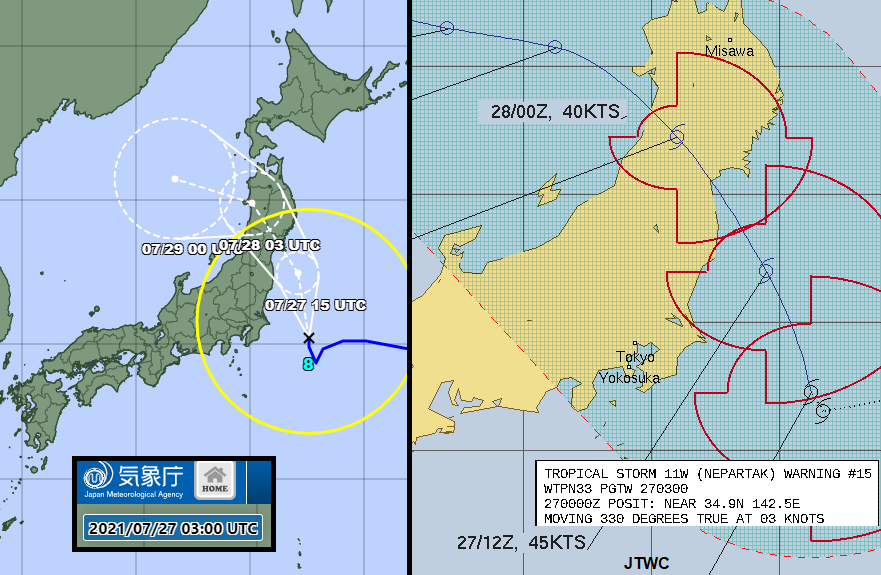 This will bring some relief from the heat for Tuesday 27th and Wednesday 28th July. With increased cloud and showery rain for Tokyo, It is labelled locally as 'Typhoon Nepartak' although it is currently at equivalent Tropical Storm strength, with winds over 34 knots and not expected to reach the equivalent of a category 1 Atlantic Hurricane. At this point, the WMO (World Meteorological Organisation) would refer to it as a Typhoon with winds over 64 knots. Nepartak is forecast to have sustained winds of around 40 knots at landfall on Tuesday night.

There are already alerts for gales, high waves and a storm surge with concerns for heavy rain before this. The storm is forecast to move across northern Honshu, the main island of Japan, from east to west. There has already been some rearranging of the sailing, rowing and archery events for Tuesday. It could add some liveliness to the Surfing competition, a first for the Olympics. Officials are keeping a close eye on the conditions and forecast.

There is a Tokyo2020 weather portal from the JMA , (Japanese Meteorological Agency). 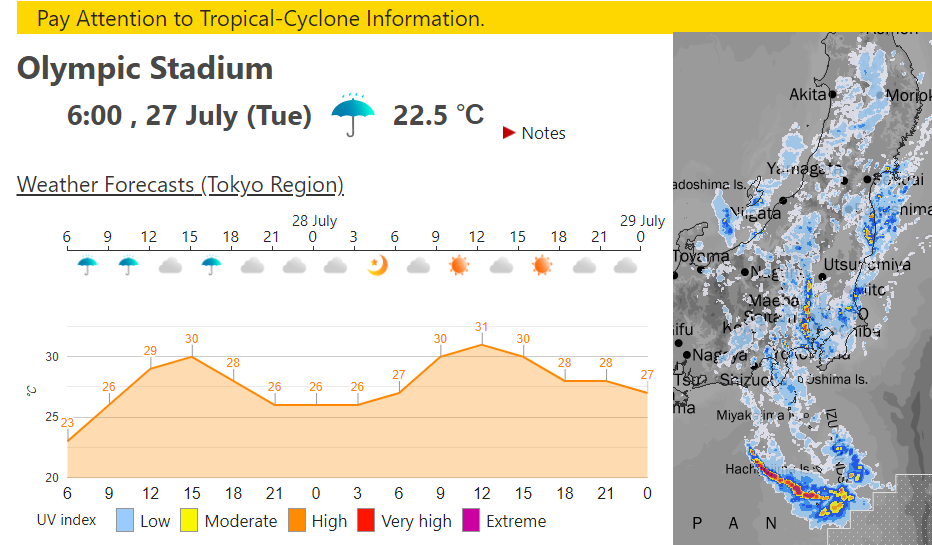 It has been hot in Japan recently. Maximum temperatures have been in the low 30s Celsius so at the top end of those seen last week in the UK. Whilst the UK heatwave is now fading, Japan will continue to be hot. Daytime maximums stay around 33C with minimums of 25C, so still very warm at night. Depending on the venue and time of day, this summer heat has been quite a feature of some Olympic events.

Russian archery competitor, Svetlana Gomboeva fainted in the heat. She had to take cold drinks and use ice packs as others had to sculk in the shade.

It's not as hot as it has been in the past for the Australian Open tennis but there have been requests for the middle of the day matches to be moved to the evenings. The International Tennis Federation measures heat stress by looking at temperature, humidity, wind speed, the angle of the sun and any cloud cover. There has not been any movement so far. Only the centre court at Ariake Tennis Park (14) has a retractable roof, to be used for rain. 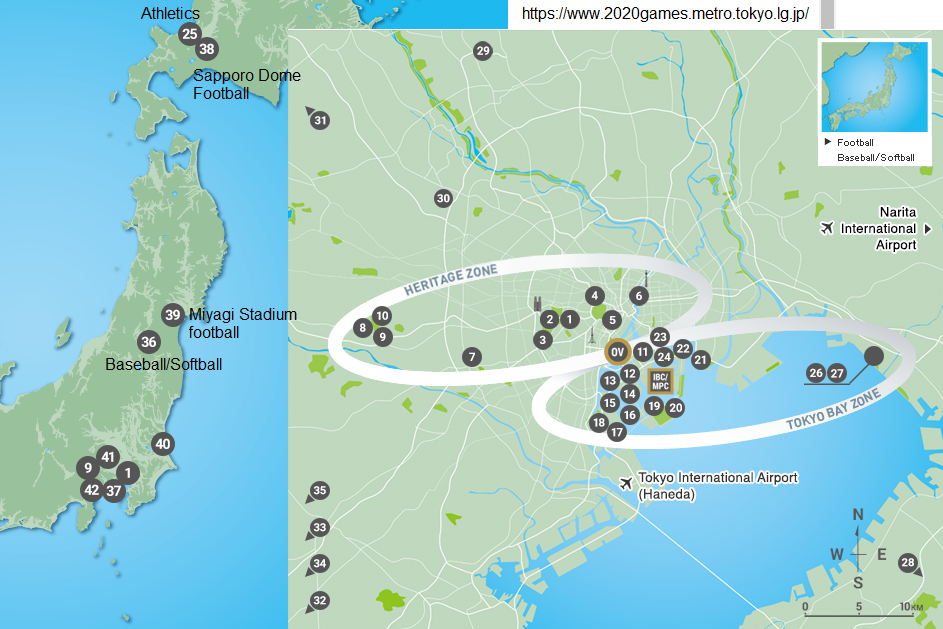 The cycling road race Team GB competitors were braced for gruelling heat and humidity last weekend even at height, heading up to Mount Fuji. Monday's gold medal winner Tom Pidock had trained for his cross-country mountain bike race in a tent back home in Yorkshire to re-create the humid, hot conditions.

Skateboarding is also taking place for the first time at the Olympics with competitors sweltering at the concrete Ariake Urban Sports Park on Tokyo's waterfront (13). The intense heat was quite a change from the indoor air-conditioned stadiums. Whilst some skaters and skateboards felt the strain, Justin Eaton (USA) from Arizona calmly listened to music on his headphones and won bronze as he was used to the hot conditions.

Kasai Canoe Slalom Centre (21), with its manmade course, ended up with the warmest waters that some Olympians had ever experienced. This concrete also heated up under the sunshine as the water was pushed round and round the course. Some of the Kayak competitors also commented how warm, the water was for the heats but in a worldwide event, it depends on what you are used to back home. 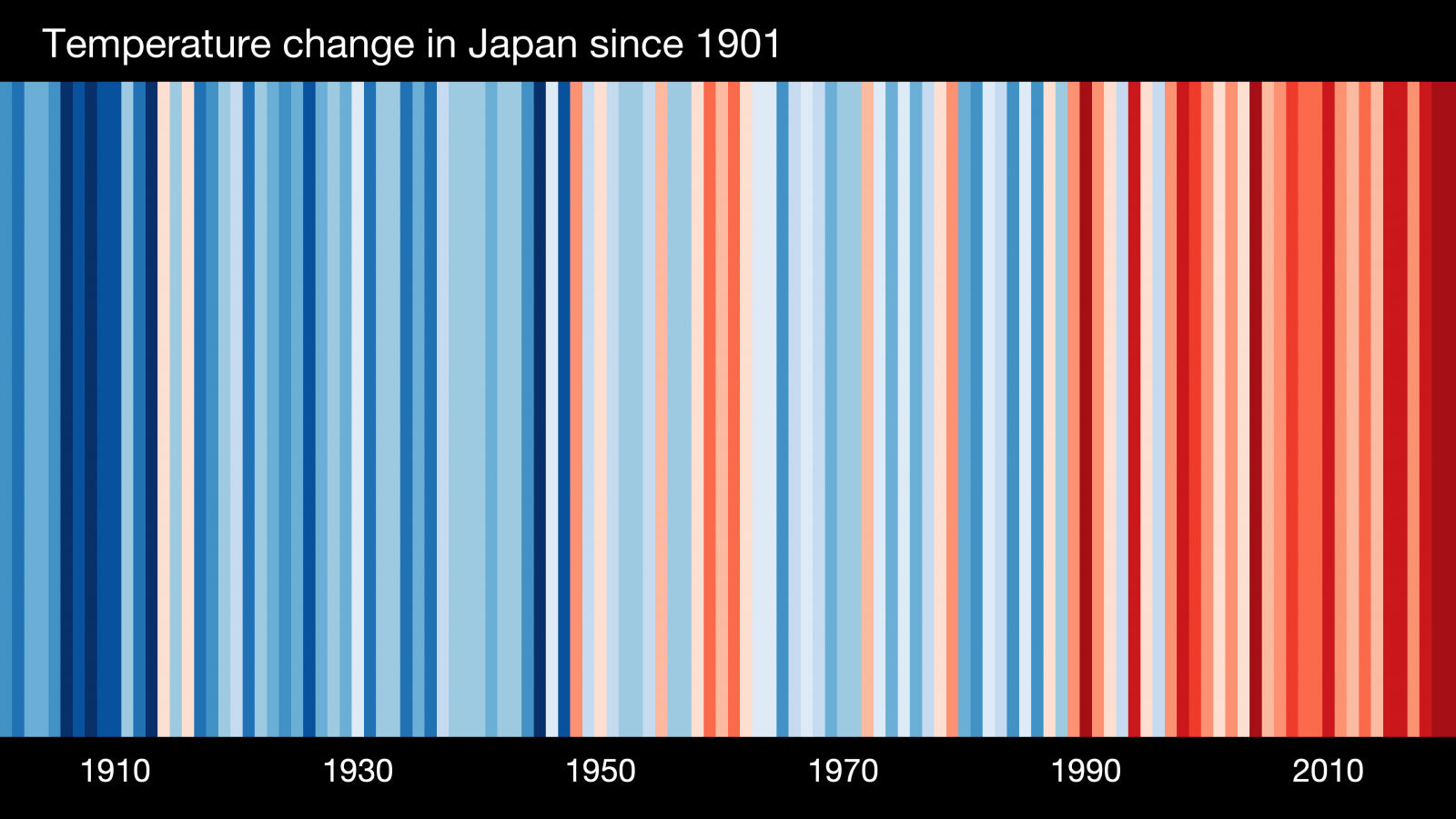 Japanese summers do bring hot and humid weather, following a time of seasonal heavy rain. However, like so many parts of the world, climate change is showing its hand. With an overall warming, more severe rainfall events and episodes of serious heatwave. Spring 2021 was the warmest on record for Japan, dating back to 1873.  According to the Japanese Ministry of the Environment, Tokyo’s annual average temperature has increased by 2 degrees since the mid-1960s, and the number of days exceeding 35 Celsius each year has risen from just one in 1964 to 12 in each of 2018, 2019 and 2020. The UK all-time record is 38.7C, with temperatures over 35C being notable here. Japan’s record is 41.4C.

Summer health advice includes avoiding heat stress by staying indoors in the hottest part of the day. There is the more traditional practice of sprinkling water on balconies and doorsteps and growing vegetation up walls to create a barrier layer for homes. Splashing water on your face and limbs helps to cool down, along with cold drinks and frozen cucumbers or watermelon. There are not any Olympic spectators for Tokyo2020 but there are the Olympians, coaches and medical teams, officials, venue workers and horses for the Equestrian events. All having to cope with the hot, humid conditions.

Some events were moved to the climatological 'less hot' Hokkaido island in the north. Even here was hit by intense heat in the run-up to the Opening Ceremony as competitors tried to acclimatise. The Marathons and Race Walks will be Sapporo with the marathon starting at 7 am to avoid the worst of the daytime heat. The football is at the Sapporo Dome (38), a familiar venue from the 2019 Rugby World Cup when Tokyo was hit by Typhoon Hagibis. 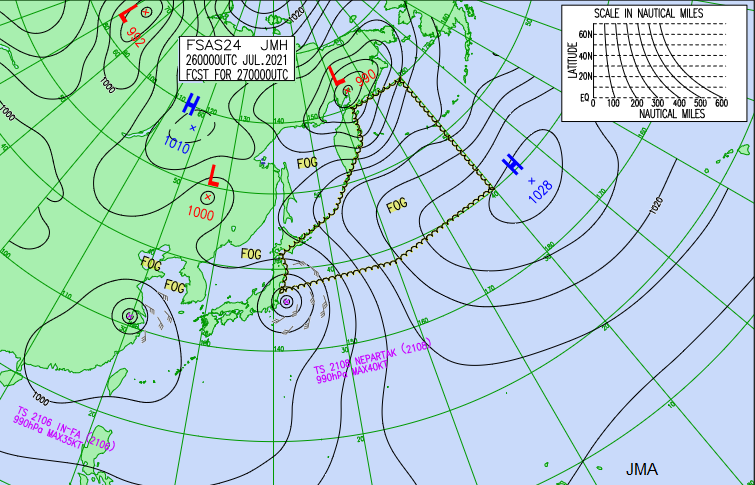 It is most unusual for a Typhoon to head into eastern Japan, moving north-westwards. The often dominant high pressure in the North Pacific is not as large as usual. The flow around this is steering Nepartak towards NE Honshu. Typhoons are uncommon at this time of year and this area is extremely rare for landfall. They usually head up from the southwest and move east or northeast.

Although Nepartak is not a major cyclone, it will still bring heavy rain and high totals across northern Honshu midweek and a wider scattering of showers. This could cause damage inland, although not necessarily affecting the Olympics and the winds will strengthen. The Olympic Rowing and Archery have already been moved to give a window of time as the cyclone arrives. Surfing and Sailing are likely to be affected by the waves. Any lightning will increase the number of events being affected.

Even as Nepartak clears away on Wednesday, over across the Sea of Japan, there still could be heavy showers or thunderstorms. The Games don’t end until 8th August. The Japan National Stadium, the Olympic Stadium (1) only has a partial roof which was designed to allow natural cooling. It has “eave-like elements inspired by traditional Japanese architecture” which allow more breeze to flow around the Stadium. In summer, when southerly winds prevail, some of the airflow is directed upwards, taking ground heat with it. For this Olympics, there isn’t a weatherproof roof but there is natural ventilation rather than air conditioning, as long as there is a breeze. It was designed by Kengo Kuma, who also designed the V&A in Dundee, Scotland. 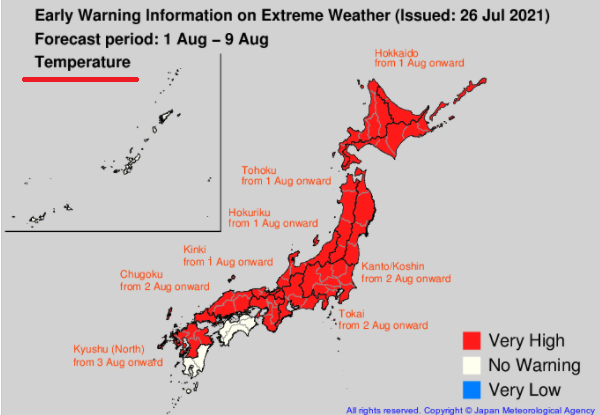 Already the JMA  is forecasting high temperatures and continuing heat for early August. Then after a few weeks, the Paralympics take place starting on August 24th until September 5th as the NW Pacific typhoon season continues.