There will be a distinct shift for the UK weather this week. Leaving behind the “extreme heat” conditions which saw hot days and “tropical nights”. Northern Ireland has seen over 30C recorded for several days, broken its highest temperature record and even yesterday was the hottest place in the UK with Armagh reaching 28.2C. This week the maximum will be nearer 18C.

You might be glad for less heat as you return to work after a break or alternatively be saddened that the hot, sunny weather is being disrupted as you head off for a summer holiday. Low pressure over the UK will bring more showers and thundery downpours and gradually draw in a fresher NW wind. The coasts and beaches won’t be the same but today still looks fine for many. 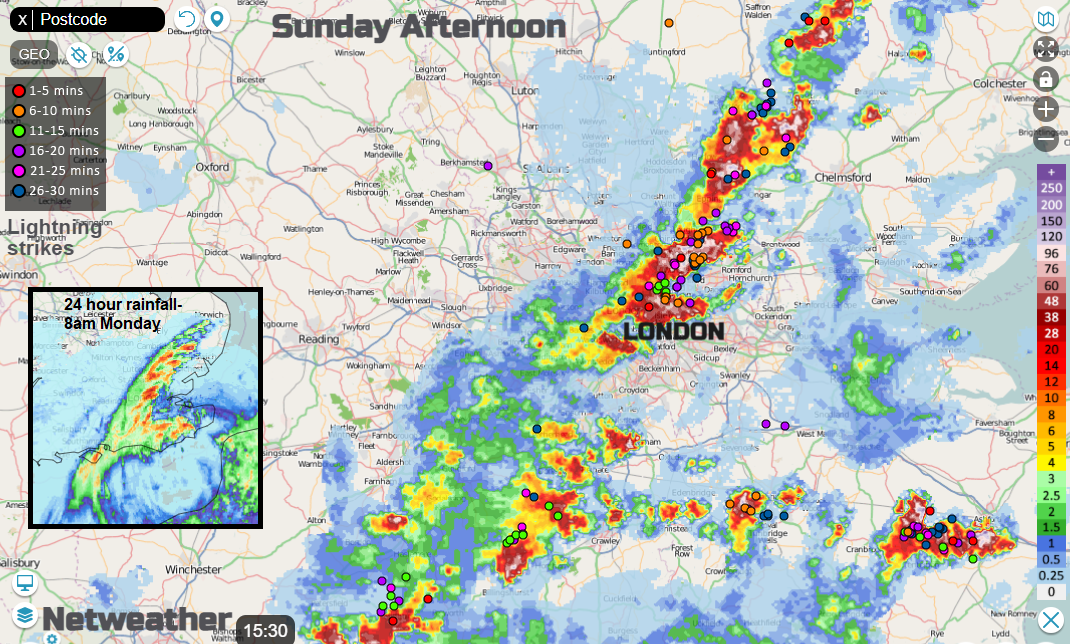 The threat of flooding continues. This has been an issue throughout the hot weather with scattered thunderstorms bringing torrential rain, flash flooding, immense lightning shows and hail. On Sunday, there was flooding and funnel clouds with London seeing roads like canals, the Underground flooded, and East Anglia also hit again. The runoff from the downpours quickly fed into rivers, which raised their levels too. The Environment Agency (EA) still has flood warnings and alerts in place asking people to take care on riverside paths.

As low pressure stays nearby this week, there will be more heavy showers and the EA are highlighting that the risk of localised flooding from surface water and rivers remains for England and Wales on Tuesday, Wednesday and Thursday. 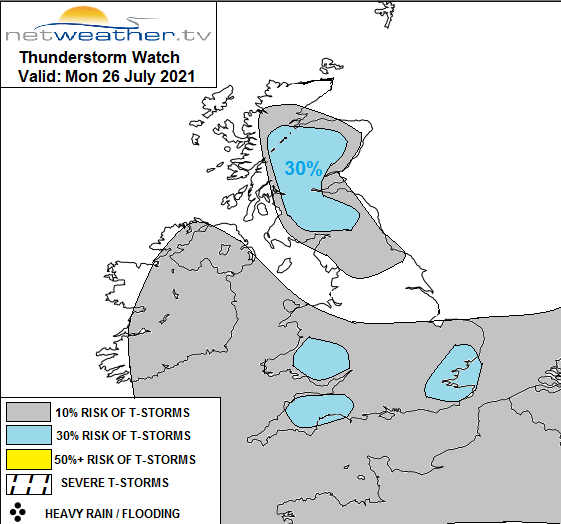 This morning Kent has had heavy showers, those keep going. With the low centre out in the North Sea near Aberdeen, there is a lot of low cloud for NE Britain and rain for the Northern Isles. Heavy showers will develop inland for the higher ground of Scotland this afternoon, worth taking note if you are walking in the hills and mountains. These could include thunderstorms and so brings a risk of lightning.

Convective forecast Mon 26th  "Main focus for thunderstorms to develop today will be across Scotland - where surface heating of warm/moist airmass combined with breeze convergence inland and orographic lift of high ground will support the development of slow-moving heavy showers and thunderstorms from late morning and through to the evening. The main concern with any storms will be localised flash-flooding. "

There will also be isolated heavy downpours for southern England with a small risk of thunderstorms. It won’t be like yesterday but with so much water lingering, any extra downpours could still cause issues.

Is it climate change? It’s summer and the UK does see times of high temperatures, heat and sunshine. Also, thundery outbreaks and torrential downpours. That happens.  The message that is repeated over and over is that we don’t need to tie these individual events to climate change but should look at the patterns, the risks and longer-term trend. Our warming (long-term) climate makes the likelihood of severe (short-term) weather events higher. The heat, the summer heavy rain events will be enhanced by climate change, given a boost and happen more often.

Olympic Park tube station in London was underwater on Sunday, it was built for the 2012 Games. It’s not just what comes from the skies that leads to impactful flooding.

Intergovernmental Panel on Climate Change - Today is the start of the IPCC AR6 WGI Approval Plenary, ‘when 195 governments will meet (virtually) for the next two weeks. There are three 'Working Groups' (WGs) who assess the physical science (WGI), impacts & vulnerability (WGII) and mitigation solutions (WGIII). Each WG produces a large report, written by 200+ authors & reviewed multiple times over several years by 1000s of other scientists. Alongside the main Chapters of each Report is a 'Technical Summary' (TS) and a 'Summary for Policymakers' (SPM). At the end of the process, the 195 governments who are part of the IPCC meet to accept the contents of the Report and TS, and to approve the wording of the SPM. ‘ @ed_hawkins 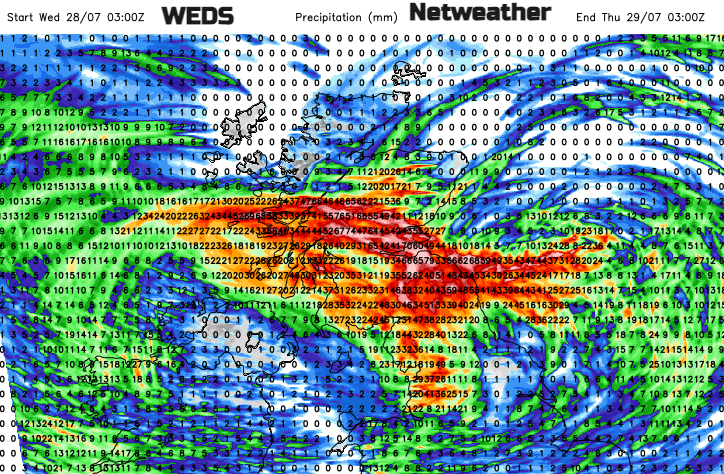 Later today heavy showery rain will move over Northern Ireland then tonight over SW Britain. Tuesday will see the heavy showers spread over the UK with the risk of thunderstorms, after a fine, still start for some. These are showers so some places will miss them and stay dry. During Tuesday night, the NW flow begins to back and by Wednesday there will be heavy frontal rain moving from NW England early on and settling over southern and central Scotland. This will include thunderstorms and brings the risk of flooding to Scotland midweek. This threat of heavy downpours, thunderstorms but brighter sunny spells in between continue all week. Wales looks more prone by Friday. 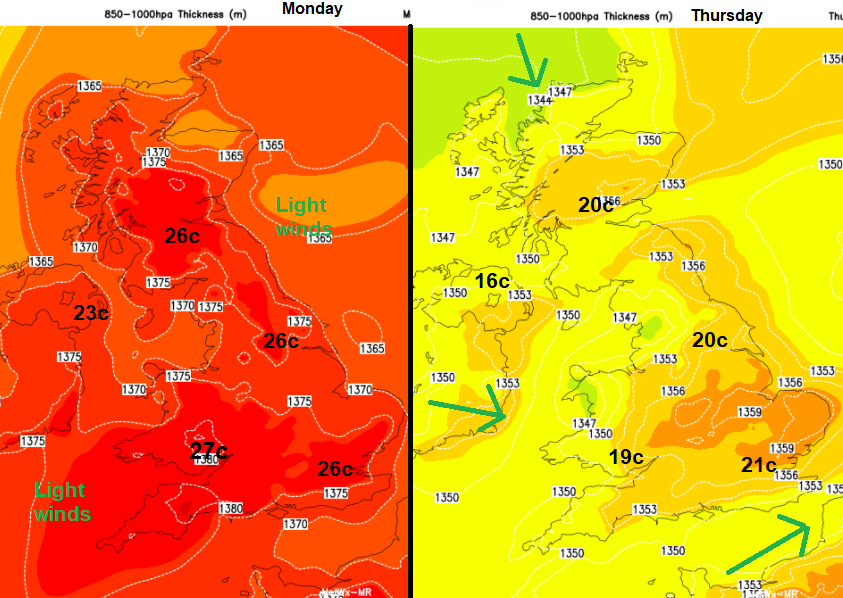 Temperatures remain high on Monday, still very warm for eastern Britain on Tuesday but as the flow from the Atlantic takes hold they will decrease. Such a difference for Northern Ireland and western Britain. If you are heading off for a few days, you definitely need your raincoat and a jumper for the evenings, but that July sunshine is still strong in between the showers.