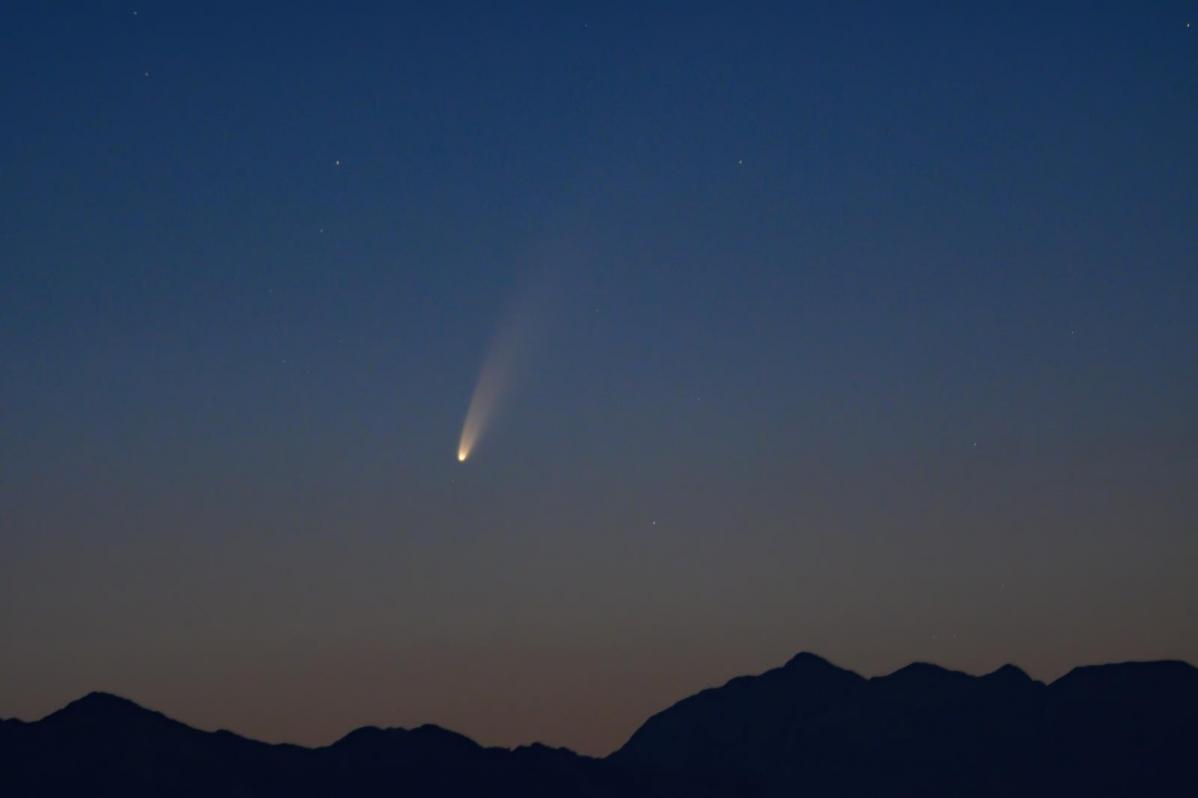 Comet Neowise getting closer and now visible after sunset, dependent on cloud cover

Comet C/2020 F3, also known as Neowise, was discovered on March 27th by the space telescope known as NEOWISE, and has been visible to the naked eye for those who get up to see it in the early morning sky over the last several days or so. Comet Neowise last entered the solar system around 4,500 years ago and will not appear again for another 7,000 years. The last time a comet was this visible was in 1997 with the appearance of Comet Hale-Bopp.

The comet will reach its closest point to Earth on the evening of July 22, passing our planet at a distance of around 64.3 million miles (103.5 million kilometres) away. After that it will move away from the earth.

The comet so far has only been visible in the early morning in the northeast horizon for those getting up in the twilight just before sunrise. However, the comet is moving away from the sun and moving closer to the earth over the next 7 days before reaching its closest point on Wednesday next week. So morning visibility just before sunrise will diminish and, the good news is, Neowise will become more prominent in the evening sky after sunset.

Space.com suggest the best time to view the comet in the evenings will be between today and the 19th. This is because there will be no moonlight up until the 20th, as the moon will be a waxing crescent. After this the comet will become fainter.

Not only is Comet Neowise visible, but there are some spectacular photos over the last few days of the comet just above noctilucent clouds that have put on a display around twilight of the evenings.

Noctilucent clouds are found high up in the Earth’s mesosphere and consist of ice crystals that reflect sunlight just before it gets completely dark at ground level. They appear in late clear summer evenings and are only seen at latitudes between 45°N and 80°N in the Northern Hemisphere, and equivalent latitudes in the southern hemisphere.

Will the skies will be clear enough?

However, this fascinating displays for sky watchers are dependent on ideal conditions. The most obvious is cloud cover of which has been extensive over much of Britain over recent days, courtesy of a moist westerly flow and a succession of weather fronts moving off the Atlantic so far this week. Also, haze, air pollution, humid air, smoke and light pollution from street lights can affect visibility. Generally the further away one is from built-up areas, busy roads and motorways the darker this skies and better the visibility will be.

Cloudcover over coming days while Comet Neowise is still visible

This evening after sunset looks generally cloudy again, though some cloud breaks are forecast across Wales and SW England. However, high pressure will start to build from the southwest on Thursday, so weather fronts will be kept at bay on the airmass will become less moist as drier air subsides from aloft.

There should be better cloud breaks and clear spells on Thursday evening after sunset away from the northwest. Clear skies possible after sunset Friday evening across far south of England and also Scotland and N. Ireland in clearer polar maritime air north of a cold front which will bring cloud and rain to northern England, Wales and Midlands. The cold front then sinking south on Saturday bringing a cloudy and damp late evening to much of Wales, Midlands, southern England and East Anglia. Scotland, northern England and N. Ireland better chance of clearer skies with polar maritime airmass away from showers across northern Scotland.

With a cold front clearing the south on Sunday morning, all parts in clearer polar maritime air with good visibility by evening, though it doesn’t look totally clear skies with variable amounts of cloud spilling southeast, clearer conditions most likely for southern areas. Early next week should hopefully see less cloudy skies than this week across the south, with high pressure building in, but the north maybe cloudier plagued by fronts here.