Netweather
Latest - Week Ahead: Changeable with low pressure never too far away

What are the different types of thunderstorm?

Single-cell thunderstorms - are small, brief, weak storms that grow and die within an hour or so. They are typically driven by heating on a summer afternoon. Also known as a ‘pulse’ thunderstorm, a single cell storm consists of a short-lived updraft of rising moist air that is soon cut-off by the rain falling down into the updraft turning it into a downdraft, leading to a short life of the storm. This occurs because upper winds are weak (weak wind speed shear) and thus do not tilt the downdraft away from the updraft. Usually these storms are non-severe. They may produce brief heavy rain and lightning. 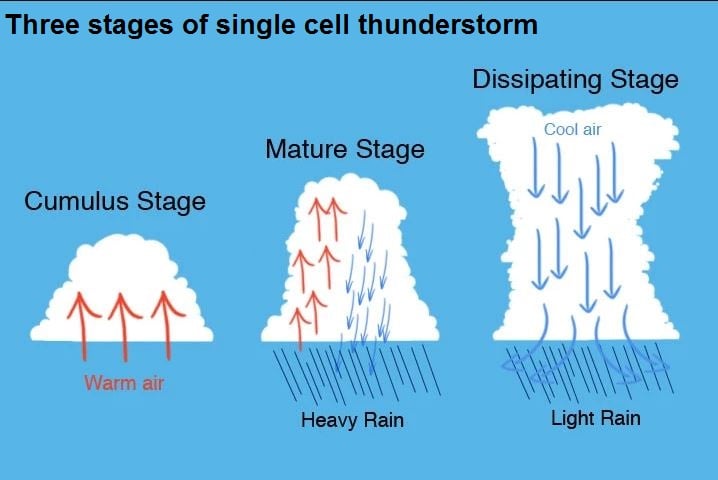 Example of single cell thunderstorms across northern and eastern England 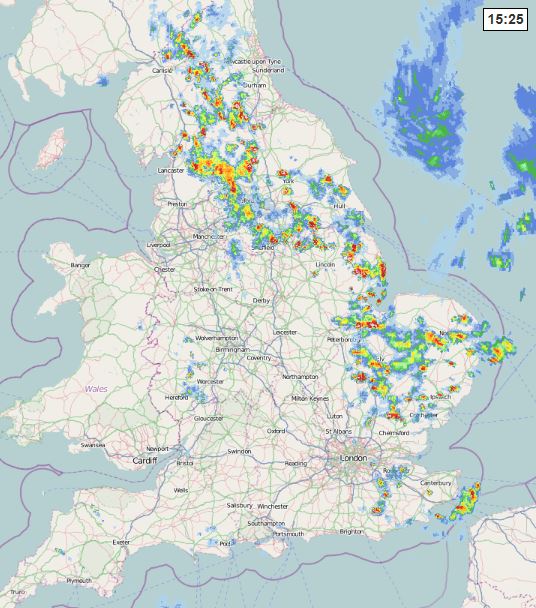 Multi-cell storms - are fairly common thunderstorms in which new updrafts form along the leading edge of rain-cooled air of the downdraft of the storm (the gust front). Individual cells usually last 30 to 60 minutes, while the system as a whole may last for many hours. Upper winds tend to be stronger than when single cells form, so downdrafts tend to be tilted away from the updrafts. These storms are generally non-severe, but occasionally they may produce isolated severe weather. These storms may produce hail, strong winds, brief tornadoes, and/or flooding. 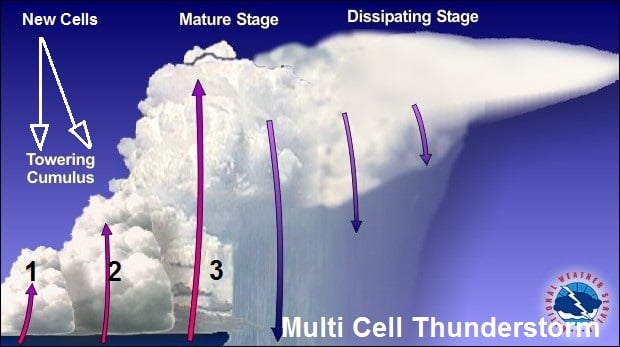 Squall line - is a group of storms arranged in a line (also known as a Quasi-Linear Convective System or QLCS), often accompanied by high winds and heavy rain. Squall lines tend to pass quickly and are less prone to produce tornadoes than supercells. They can be hundreds of miles long but are typically only 10 or 20 miles wide. They can produce severe weather, with locally damaging wind gusts in excess of 50 mph and flash-flooding.

Example of a squall line moving across Wales & SW England during July 21, 2017

Supercell - is a long-lived (greater than 1 hour) and highly organized storm feeding off an updraft that is tilted and rotating. This rotating updraft or mesocyclone - as large as 10 miles in diameter and up to 50,000 feet tall - can produce tornadoes and large hail, as well as damaging wind gusts. Supercells usually form with a combination of strong instability and vertical wind shear (veering of winds with height) – causing the updraft to corkscrew or rotate. Usually supercells produce some or all severe  hazards – which includes large hail, damaging wind gusts, tornadoes and flooding. 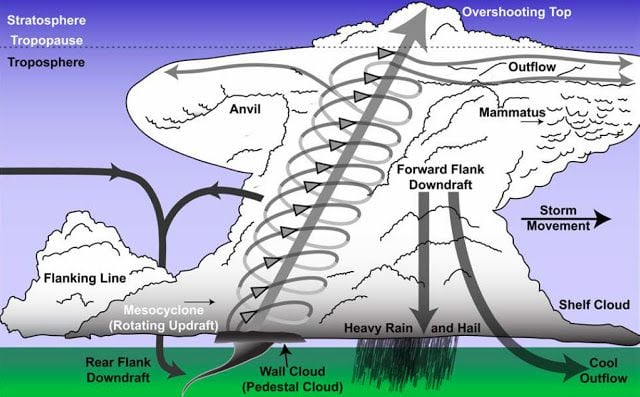 Classic radar signature of a supercell

Supercells are fairly rare in the UK, perhaps occurring one or twice a year on average, the video below is an example of one north of London on 27 May 2018:

Mesoscale Convective System (MCS) - is a collection of thunderstorms that act as a system. An MCS can spread across several counties and last more than 12 hours. These storm systems can contain supercells and sometimes can develop their own low pressure circulation or Mesoscale convective vortex (MCV). These thunderstorms systems usually form and are driven by strong wind speed shear aloft, if vertical shear (veering winds with height) is strong too, embedded supercells are possible. Severe weather can be produced by these systems, particularly large hail, damaging winds and flooding, tornadoes are also possible with any embedded supercells.

Mesoscale Convective Systems in the UK are relatively rare, occurring once or twice a year on average. They are usually associated with Spanish Plume setups, more about this can be found below:

An example of an MCS approaching southern England, May 27, 2017

Derecho  - is a widespread, long-lived wind storm that is associated with a band of rapidly moving showers or thunderstorms. They can produce destruction similar to that of tornadoes, the damage typically is directed in one direction (straight line winds) along a relatively straight swathe. By definition, if the wind damage swathe extends more than 240 miles (400 km) and includes wind gusts of at least 58 mph or greater along most of its length, then the event may be classified as a derecho. Given, by definition, Derechos produce damaging winds, sometimes accompanied by large hail and extreme rainfall too, they always produce severe weather, They don’t occur in the UK but can sometime occur in mainland Europe and USA with the right conditions.

Do we get severe thunderstorms in the UK? 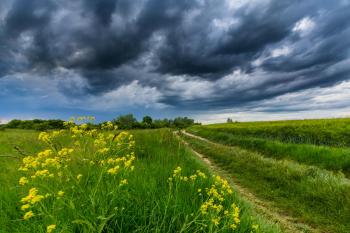 Week Ahead: Changeable with low pressure never too far away 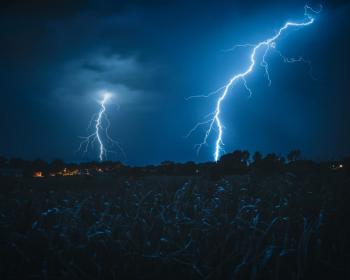 RECENT FORECASTS & BLOGS
What is a Heatwave? UK thresholds and heat warning advice
Thunderstorm Safety: How to avoid being struck by lightning
Legal Terms - Privacy Policy -