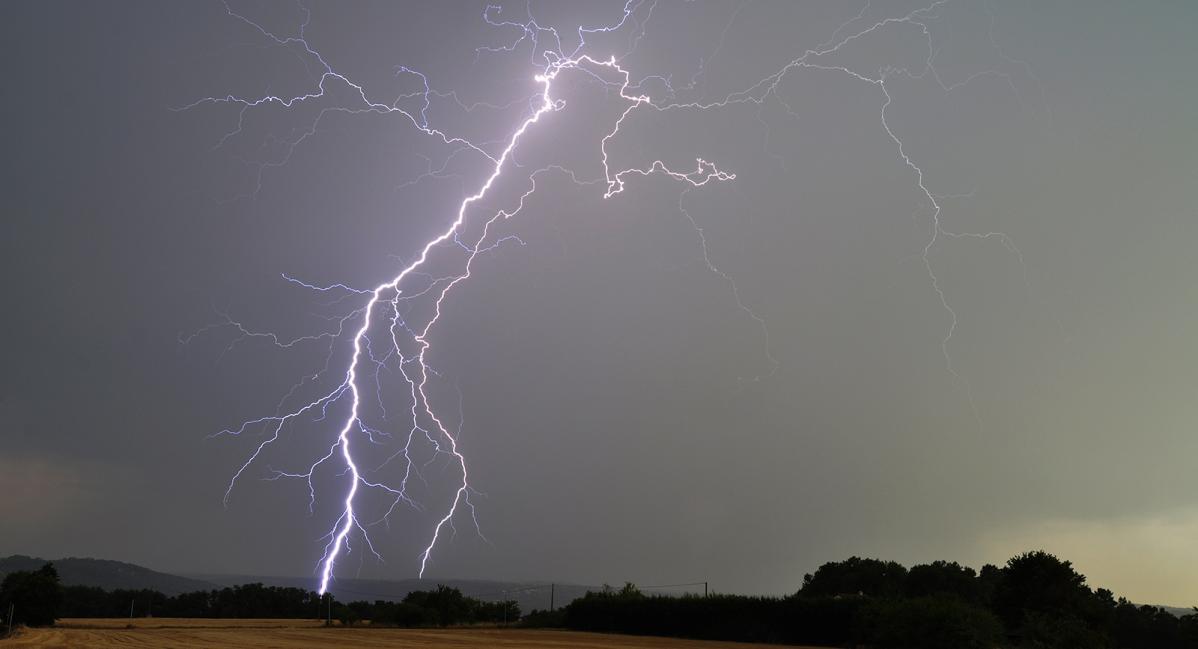 Forecasting thunderstorms is not easy. The processes that help form thunderstorms are very nonlinear and are extremely dependent on initial conditions such as triggering, shear and local variations in instability. Individual storms can be relatively short-lived (15 to 30 min), and are constantly changing in intensity (pulsing) and movement during their lifetimes. More intense and longer-lived multicell areas or clusters of thunderstorms also modify their environment, making the relationships between pre-storm environments and storm evolution even more challenging to apply.

Where exactly thunderstorms form can be by random chance, so it can be difficult to predict where they will form with precision, since we are unable to observe the atmosphere with the accuracy needed to describe it fully. We can only observe that air is unstable and a storm may form, but cannot 100% be certain that a storm will form. For example, thunderstorm development may depend on whether a rising parcel of warmed air or an airmass boundary happens to be strong enough to break through a capping inversion (warm layer aloft). Or will a previous thunderstorm create a strong-enough downburst to trigger a new thunderstorm with its gust front? Will high clouds happen to move over a region, shading the ground and thereby reducing the instability? These are some of things that can make forecasting thunderstorms challenging.

The best way for the amateur enthusiast to see if thunderstorms are likely is to use Numerical Weather Predicition (NWP) forecast models output and the basic guide below highlights the main ingredients for thunderstorms and which weather model charts to use to find these ingredients.

Ingredients for thunderstorms to form

The basic ingredients for thunderstorm formation

Needed to form clouds that grow deep enough to allow heavy rain and hail to form and thus greater chance of electrical discharge in the form of lightning.

Warm parcels of air need to rise rapidly to form thunderstorms. Instability occurs when a parcel of air is warmer than its environment. So, the greater the contrast in air temperature between warmer air below and colder air above (lapse rates) - the faster a parcel can rise.

The instability of an airmass is often calculated using indices of which the most common used is CAPE (Convective Available Potential Energy). This calculates a theoretical area where a potentially rising parcel of air will be warmer than the actual temperature of the air at different levels in the troposphere it may rise through, taking in account cooling of this parcel of air.

Where CAPE is high or forecast to be high, storms will build vertically very quickly. As CAPE increases, the potential for severe weather from thunderstorm increases. Large amounts of CAPE can lead to large hail (over 1 inch in diameter). Large amounts of CAPE can also produce prolific amounts of lightning and can be the precursor to tornadoes, combined with other favourable conditions. Severe thunderstorms are discussed further on in this guide.

Usually a ‘trigger’ is required to help parcels of warm air to move upwards into colder air aloft to form thunderstorms. This is mostly caused by weather fronts, wind convergence, lift ahead of troughs, divergence of air aloft in left exits or right entrance of jet streaks, orographic lift from high ground, or surface heating by the sun. Often more than one of these mechanisms can be present and work in tandem to support develop of thunderstorms.

Meteorologists use a variety of data for forecasting thunderstorms. Numerical Weather Prediction (NWP) are the main tool for amateurs to quickly get an idea that thunderstorms are possible. However, it can be over 6 hours later when a model run has completed to the time the model run has initialised and local conditions can change in that time. So, meteorologists will also use surface and upper air observations to determine low level moisture, instability and to determine how winds aloft may influence storm development. Satellite and rainfall radar are also a good tool to more short-range forecasting of convective development that models may have missed.

Key charts from NWP weather models to use for forecasting thunderstorms

Dew point - For surface-based storms to form, generally the dew-point (temperature which air must be cooled to become saturated with water vapour) needs to be 12C or greater.

Example of a dew-point chart - notice cold front separating drier air to the north and moister air to the south. 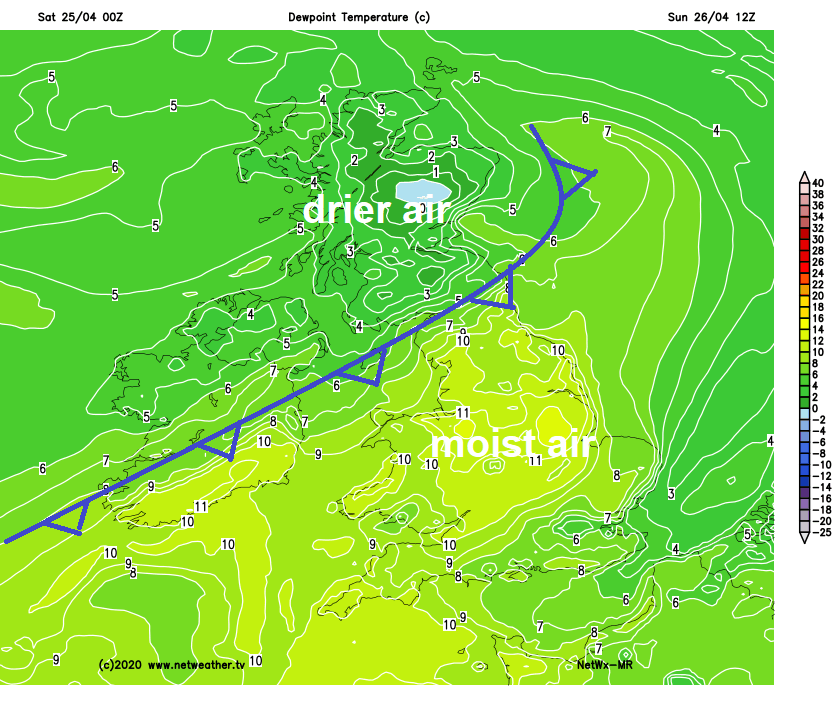 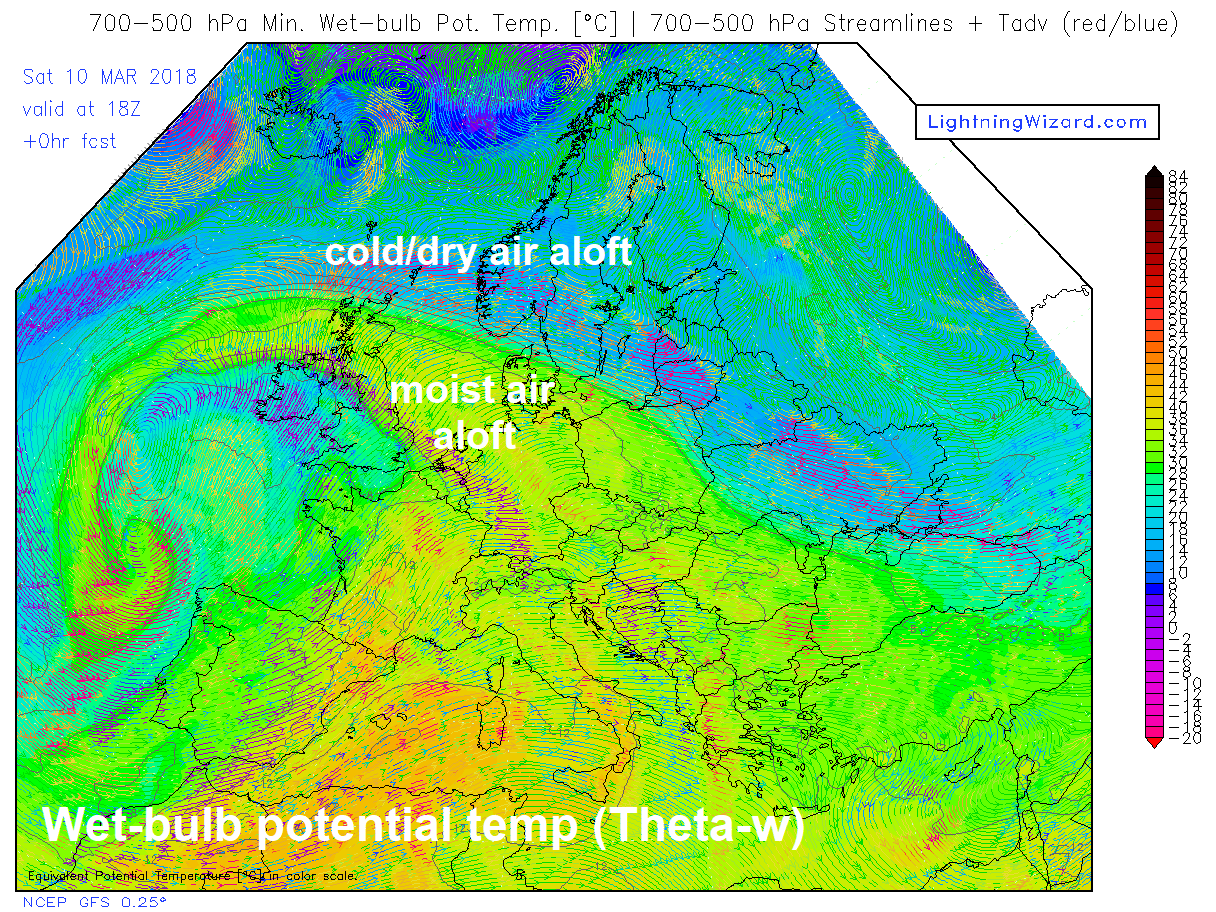 SBCAPE charts are useful to forecast the potential for surface-based storms forming in certain conditions. However, even if there is surface CAPE forecast, storms may not form – because either un-forecast cloud-cover prevents surface heating from the sun, or there is lack of a lifting mechanism or there is Convective Inhibition (CINH) where a layer of warm dry air aloft prevents parcels of warmed air rising any further. 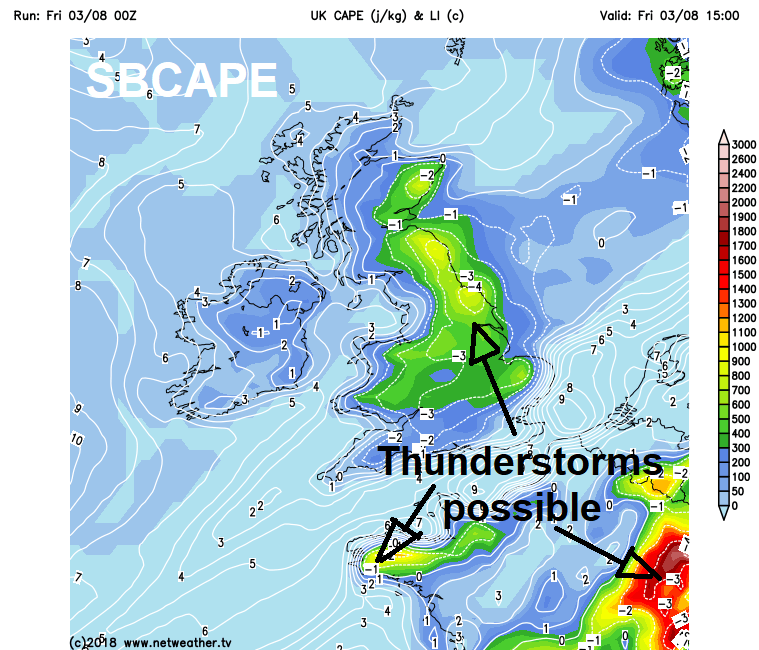 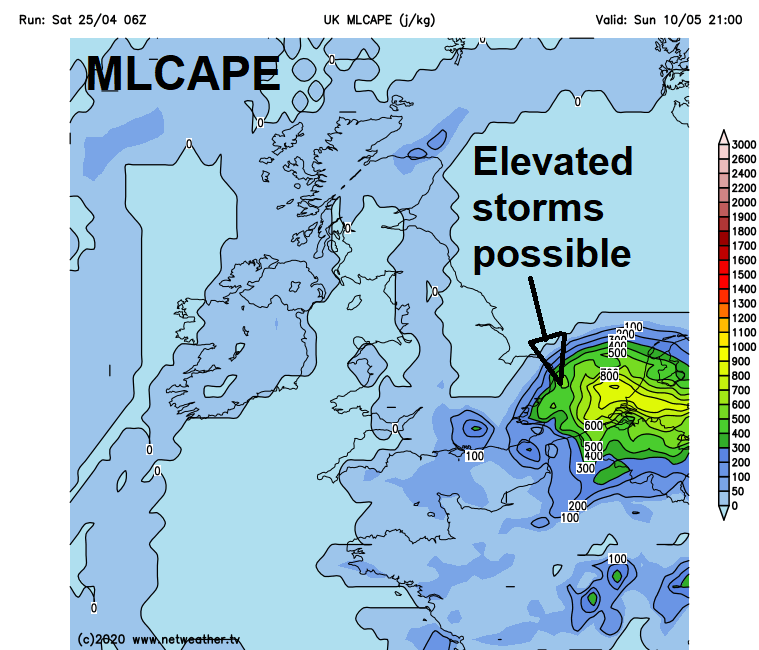 Some of the different lifting mechanisms, such as fronts, troughs and wind convergence can picked out fairly easily from weather model forecast charts available: 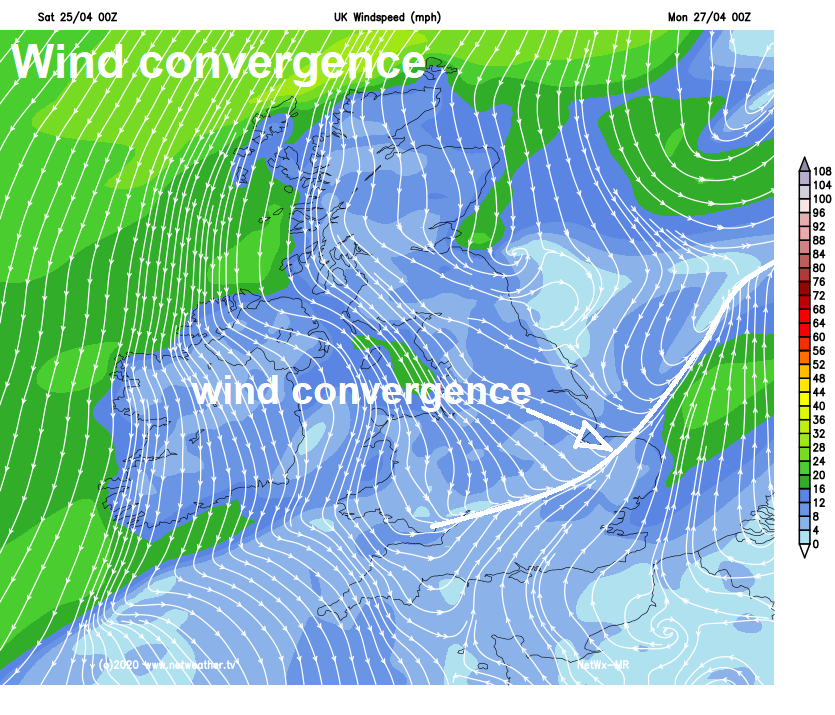 Orographic lift - by hills or mountains and pockets of stronger surface heating, which is dependant on cloud cover and local microclimates, can be less easily simulated by NWP models, so this is more reliant on geographical and local topographical knowledge and nowcasting.

Upper wind divergence - upper winds diverge in the right entrance and left exit regions of a jet streak (belt of maximum winds in a jet stream) causing a vacuum effect which forces air to rise from the surface upwards to fill the void, this helps trigger thunderstorms. Jet stream charts are widely available and its fairly easy to locate right entrances and left exits. 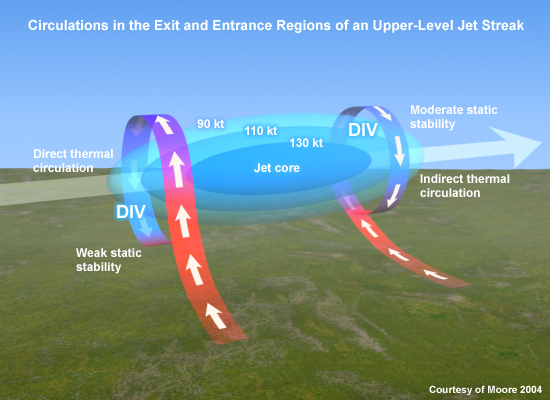 These are a simple way to see where NWP models want to break-out heavier areas of rain that may be thunderstorms, some models also have ‘convective precipitation’ charts which further narrows down where storms may form. But, NWP models can often struggle to simulate convection that can lead to thunderstorms, due to restrictions in their resolution. So they may often miss areas where storms develop. Some models are better than other at simulating development of thunderstorms, the shorter range higher resolution models (such as the Met Office’s UKV model), which have more grid points and model more layers of the atmosphere, tend to perform better than more lower resolution global models. 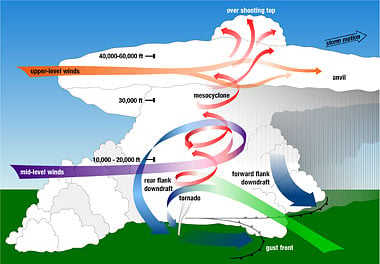 A combination of rainfall radar and lightning detection are best tools available for the UK to track thunderstorms. On Netweather Extra, as some other platforms providing weather data, you can overlay both of these parameters. 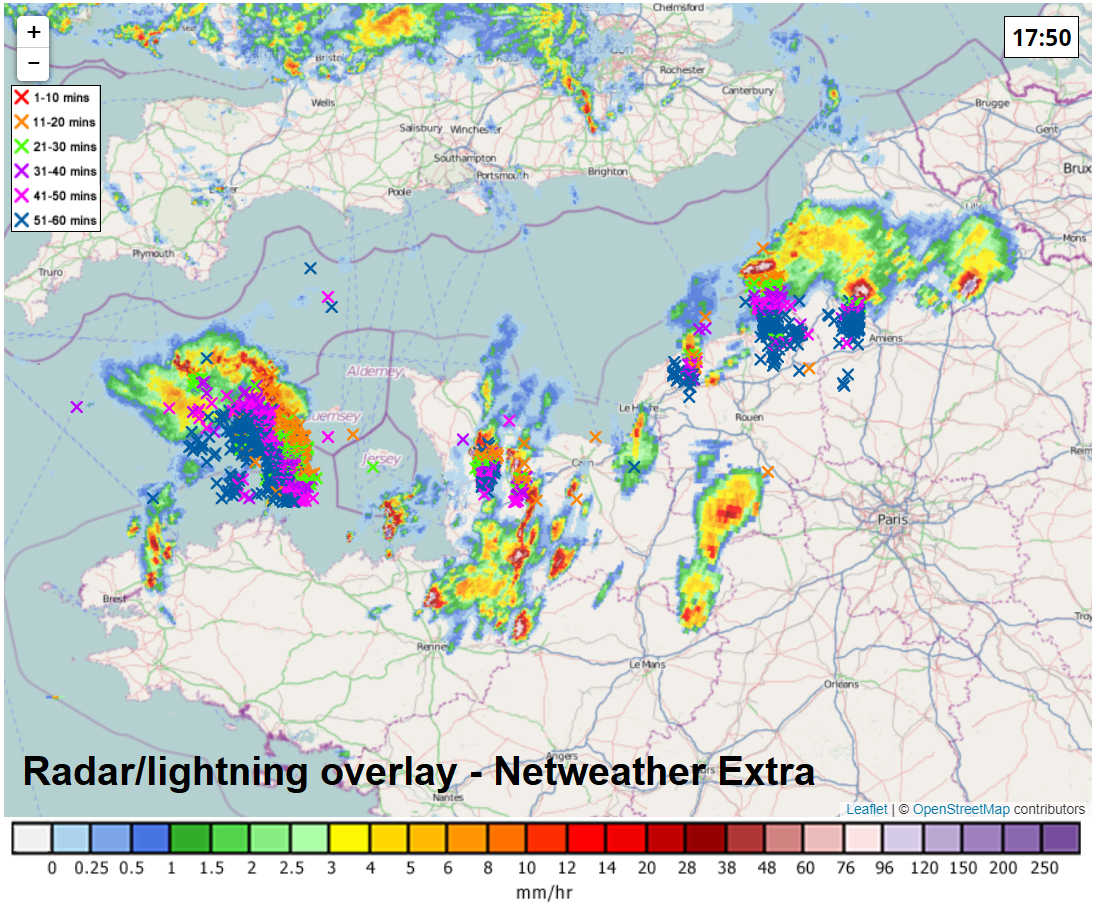 Lightning detector only - from Blitzortung.org

This is just a basic guide to forecasting thunderstorms and is not exhaustive, there is so much more in depth I can go, but maybe for another article.

Netweather issue Thunderstorm Outlooks that are forecast for the potential for thunderstorms in the day ahead. 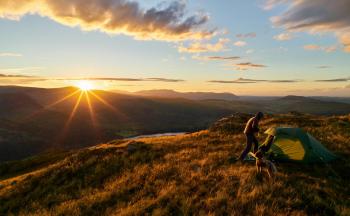 At last! Fine weather on the way for the weekend