Behind The Wheel: The Storm Chase Driver's Perspective In USA's Tornado Alley

When the weather turns severe in the USA, and warnings are issued by the National Weather Service to seek shelter, most will do just that and head indoors. But for the storm chaser, we go and meet the source of severe weather, a severe thunderstorm, head-on.

Together with guidance of the tour leader, who will be analysing data on the move, it’s the job of the storm chase drivers to get the paying guests close to these storms and track them so as to observe and experience the power of them, be it the lightning, large hail, tornadoes and the amazing photogenic structure these storms sometimes display.

The media have kind of sensationalised storm chasing through Holywood films such as Twister, Discovery Channel’s Storm Chasers and US mainstream TV coverage during severe weather – giving the job of a storm chase driver a certain ‘prestige’. However, the job is challenging and not for the faint-hearted, not least are we driving in treacherous conditions of heavy rain which can reduce visibility greatly along with producing surface water on roads which can lead to aquaplaning, or worse flooding of highways which will lead to the decision to turnaround if it looks to deep to traverse. But, also, the storms we follow often produce large hail, sometimes up to tennis ball or on rare occasions baseball size – which may crack or even smash windows on the car. Also, there are the hazards of strong or violent wind gusts produced by the severe -storms, which can reach up to 80 mph, occasionally in excess of this. We tend to avoid getting too close to tornadoes, which can produce much greater wind speeds and can roll or even lift up and throw any size vehicle. Even so, storms can be unpredictable and can drop a tornado at any moment, with little warning, so its prudent when close to a storm which may produce a tornado, to plan an escape route.

As a storm chase driver, we can expect to cover a fair few miles too, mileage that would seem unthinkable of doing in a day in the UK, due to our much more congested, often slower roads. One day in late May this year on Tour 3 we drove 570 miles from Liberal in SW Kansas to Marathon right down in the far SW of Texas – where we intercepted a severe-warned storm in the evening. This distance is the same as driving from Aberdeen to Exeter. But with generally empty, wide, straight and fast roads away from towns, with speed limits of 70-75mph even on two lane roads, it is nowhere near as gruelling as driving that distance in the UK! 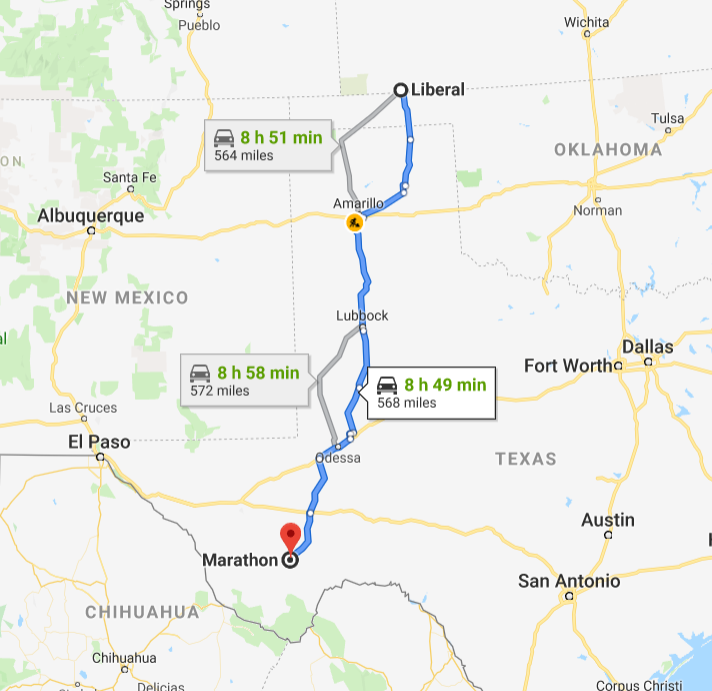 However, some chase days can be long, some days we may leave the overnight hotel stay at 9-10am and, if storms don’t kick off until early evening, be on the road until late in the evening when it gets dark and it’s no longer safe to chase sometimes. It has been known for to finish driving the day as late as 11pm, but normally when it gets dark between 8-9pm is more the norm when following severe storms.

But it's not just about experiencing storms on these long days, what I also enjoy is experiencing it with new guests who are out for the first time, sharing my knowledge with them and seeing their reactions of awe when we see and feel the fury of these big storms. We have guests who are out for the first time, but also returning guests, usually on each tour there are 11 guests, 3 drivers and tour leader, Paul, and three large SUV cars to carry us. On the long days, the banter between us all can make the long journeys shorter, so it's good we all have something in common to talk about! But the camaraderie bwtween staff and guests is also what makes the tours enjoyable too.

It’s not just what the storms throw at us that can make driving challenging, sometimes we may need to follow dirt tracks in more remote areas, such as eastern Colorado, where tarmac is not an option to keep up and be close to the storms. Heavy rain from storms can often make these essentially mud tracks slick and slippery for driving on, so the driver will experience how to handle controlling the vehicle when it starts to slide on the wet mud. Fortunately this year the vehicle I was driving has  four-wheel drive, but not always, but even with it the car can still fishtail around and struggle to gain traction, often slowing us right down.

A wet dirt track in Colorado on Tour 3 this year, thanks to heavy rain from storms, made driving challenging for the three chase vehicles

Despite the hazards thrown at us drivers by storms and road conditions and the long distances covered, probably the most dangerous thing is not the storms, but other road users unfortunately, particularly other chasers. Some of the higher severe risk days can see literally hundreds of chasers on the roads following storms, and if there is one storm that stands out amongst the others, usually quiet rural roads can be clogged by hundreds of chase vehicles, particularly at weekends, when not just organised tour groups are out by also local chasers and some from neighbouring states are out for the day, many solo chasers – who just need a mobile phone with internet these days to chase. This causes traffic to slow, particularly as chasers will often stop, unfortunately sometimes with little warning, causing cars to break suddenly and slowing the flow. It can also be an issue when chasers may need to turn around quickly if, for example, a tornado is approaching the road. A quick escape may not be possible if several vehicles are all trying to turn in the road and go back the other way. Unfortunately, although in a minority, there are some reckless chasers that take it upon themselves to overtake at high speed slow lines of chase vehicles, even one or two with blue/red flashing lights like emergency responders, to keep up with storms and keep ahead. This kind of behaviour can lead to accidents, perhaps fatal, as occurred with a team working for the Weather Channel last year, who ignored stop signs and fatally crashed into another chase vehicle, killing their occupants.

Despite these dangers, touch wood I have not been involved with or seen any accidents, I still think it’s an honour and privilege to drive for a storm chasing tour and we will always put safety first above everything else. And despite the ever-rising numbers of chasers on the roads each year, especially on big risk days, I still jump at the chance to be out there on the open road chasing storms.

Here are just a few highlights from the 10-day Weatherholidays chase (Tour 3) - I drove one of the three vehicles on the tour at the end of May into early June.

After overnight stay in Fort Stockton, a short drive to Fort Davies for target area, ended up intercepting storm between there and Alpine. Was quite a prolific lightning producer for a time. Overnight stay in Midland. 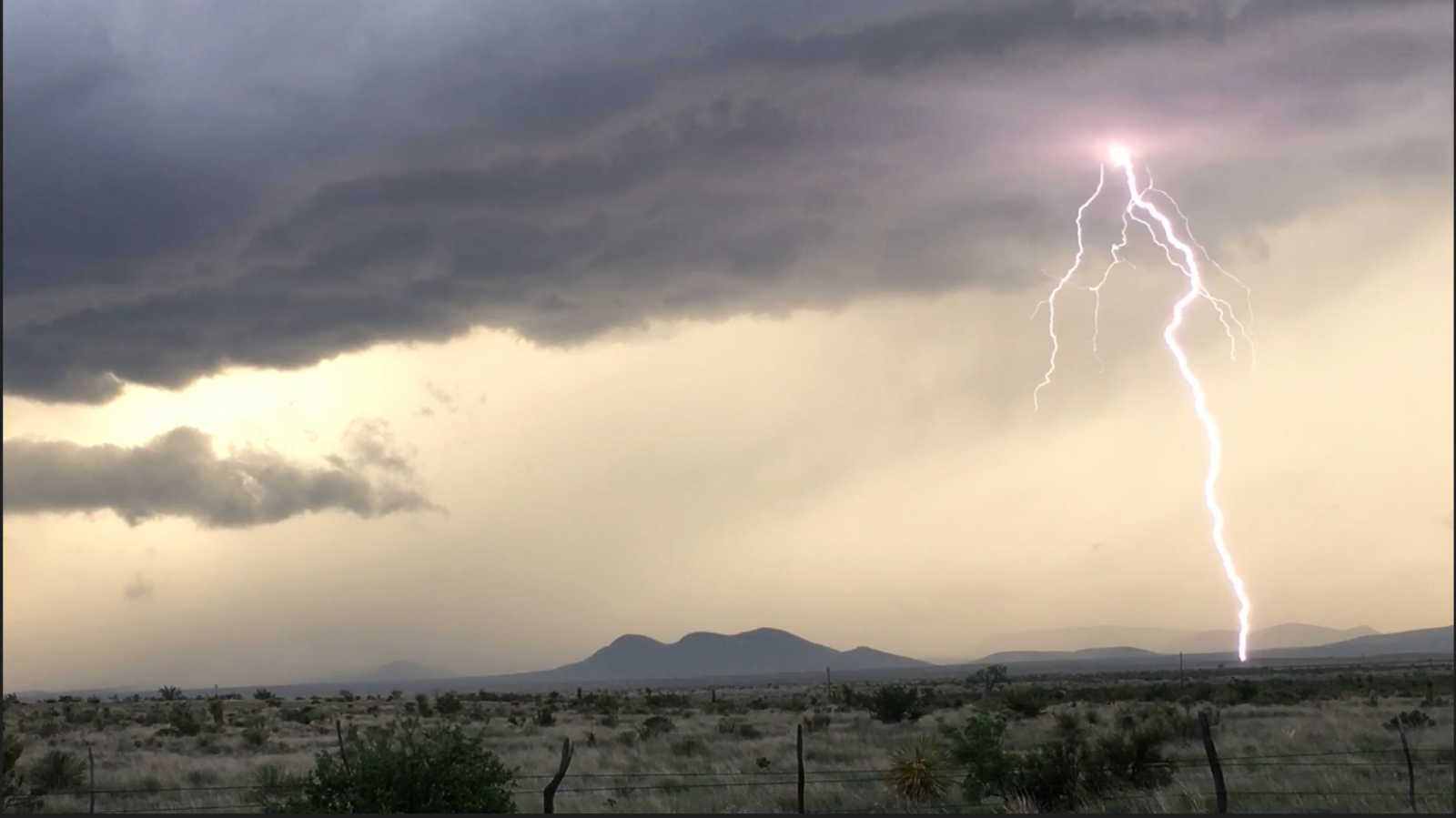 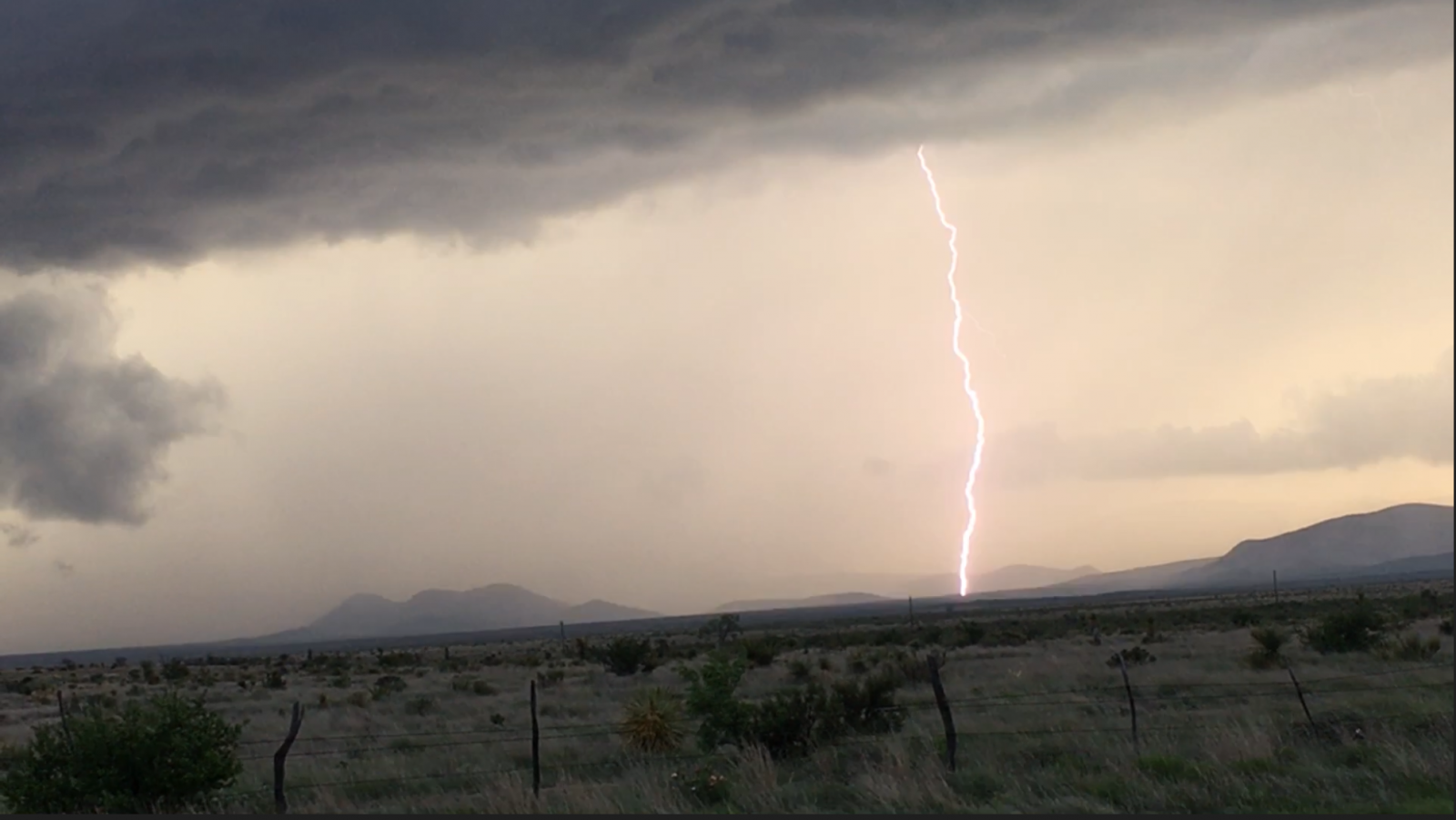 Drove from Midland, TX up to Texas Panhandle where we intercepted as supercell near Channing to the NW of Amarillo. 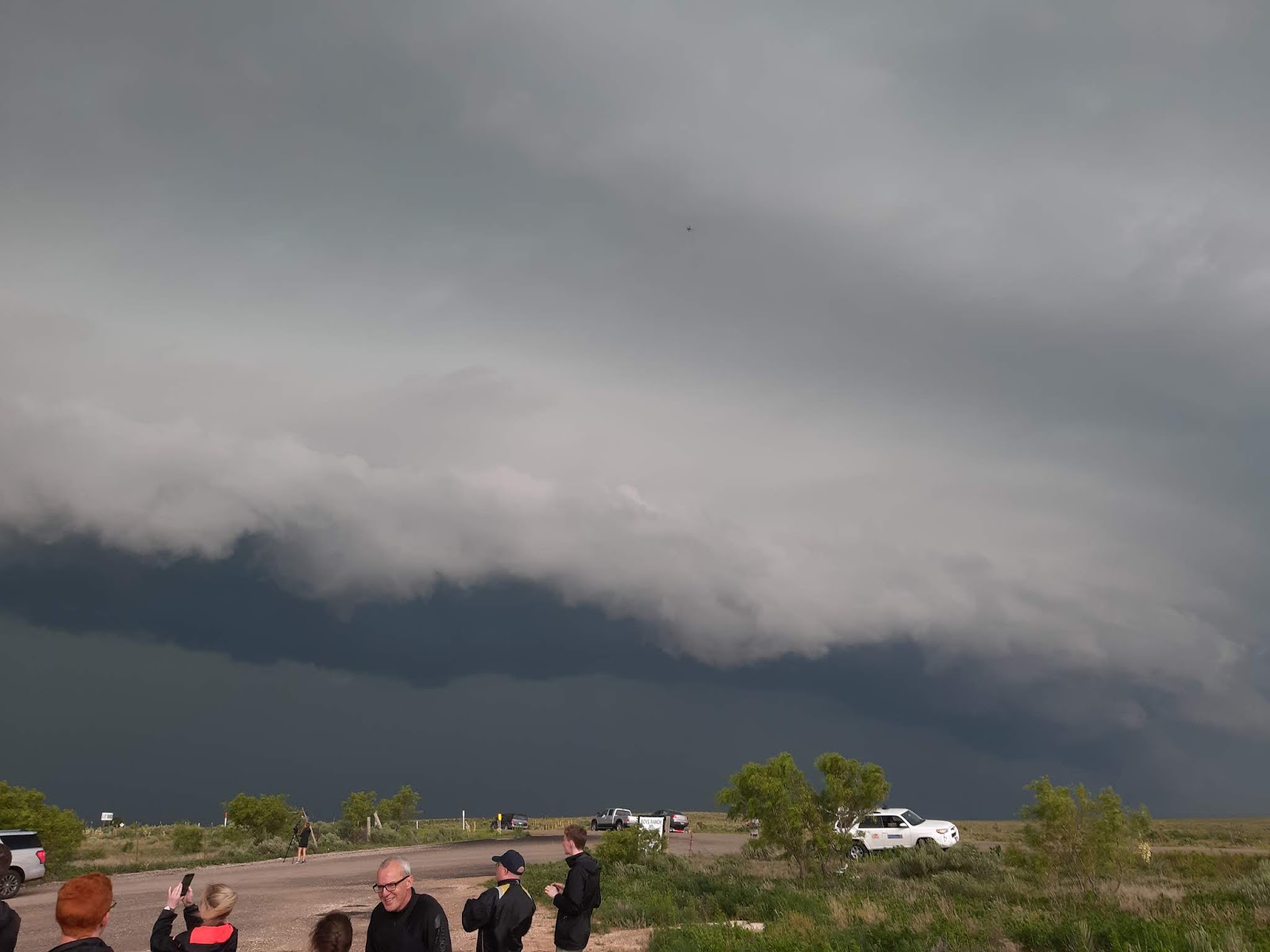 The storm chased us south and east to Amarillo, where we stayed overnight, storm rolled over Amarillo and brought flash-floods to the city, with the road outside our Motel 6 turning into a river - which some foolish people still drove through. 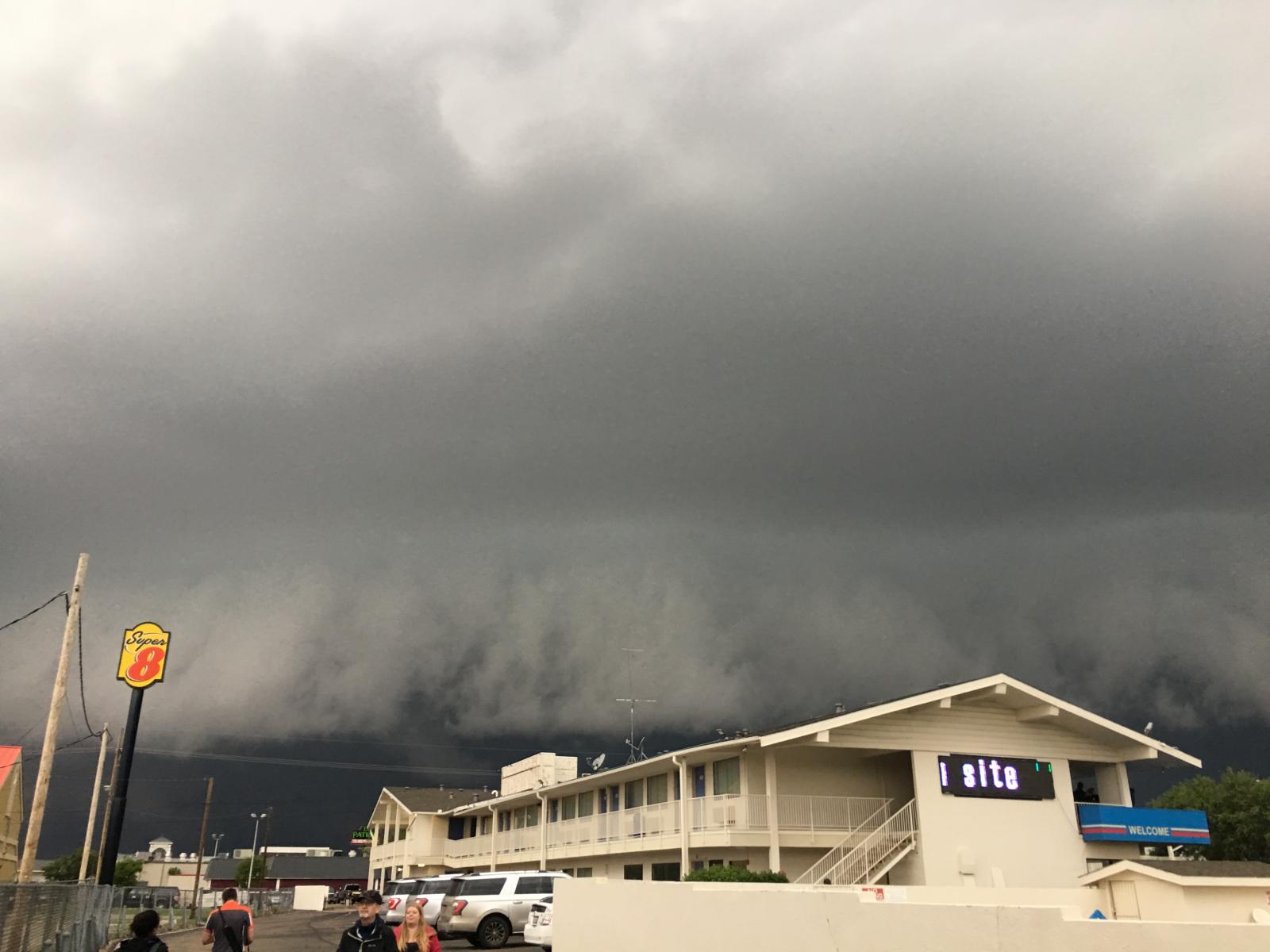 No storms we could chase pratically today, as it would require to travel too far west and make the journey back to Denver to fly back on the 8th too long. So we had a scenic drive up into the mountains of the Big Horn National Park to the west of Sheridan in northern Wyoming. Unfortunately we underestimated how much snow there would be on the higher roads and one of the cars got stuck, but a team effort, including guests, got it unstuck. 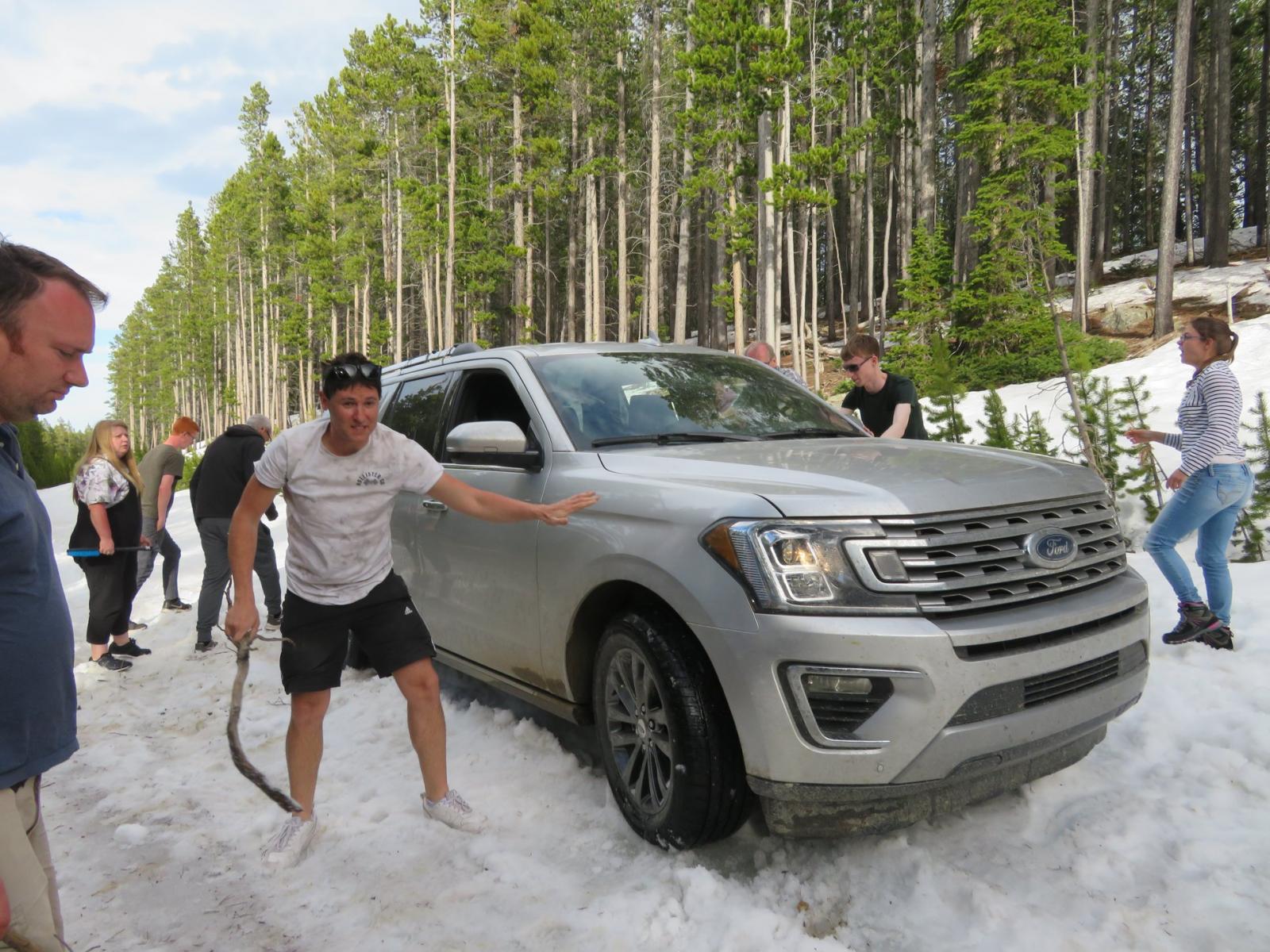 If you want to experience the trip of a lifetime chasing storms in Tornado Alley, then visit the website below