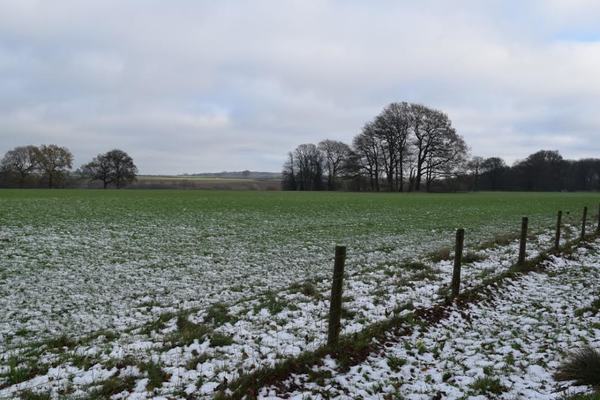 Winter Can Bite Back in April & Even May

We are all familiar with April showers, but we perhaps tend to think of spring being the season when it gradually gets warmer day by day as head through late April and May as the days get longer and the sun grows stronger.

However, often the months of April and May tend not to conform to this idealised concept, with warmer weather tending to come in fits and starts, while dramatic swings back to conditions more akin to winter, like the last few days are not unusual.

Hard frosts in April and even May have been the fear of many fruit growers since time immemorial, with new growth and blossom on fruit trees being easily damaged by frost – which can affect pollination of the flowers which can later affect yields of fruit. In France, some vineyards resort to using either fires to prevent temperatures in the vineyards falling to freezing or spraying the vines with water which then freezes into ice which in turn insulates the delicate new growth from being damaged by frost.

Frost damage prevention in the #Chablis vineyards in France, where temperatures have been dipping to -3C overnight. https://t.co/JIy51N498T

Also hill farmers dread sudden heavy snowfalls in April, which can kill new-born lambs. However, for many of us, such reminders of winter like the last few days is more of an irritation than anything more, certainly makes outdoor activities more uncomfortable and sets back work in the garden.

The weekend before Easter this April saw the mercury climb to 25.5C in London, with people flocking to the beaches and parks to soak up the sun. But 10 days later temperatures barely got into double figures yesterday afternoon in London and was several degrees colder still further north. These dramatic sunbathing-to-winter woollies flips in April or even May provides good fodder for the newspapers and online news outlets, with the usual tabloid headlines, such as the Star’s “Arctic -7C and snow to bring coldest April day for 60 YEARS”.

And just to rub salt in the wound, Iceland was warmer than parts of the UK today

Iceland didn't quite live up to the name at lunchtime today...
Matt pic.twitter.com/j1XJksyDyW

However, despite the climate going crazy headlines often proffered by the news, there is nothing unusual about such swings in temperature at this time of year. Spring is often a time of year when the prevailing southwesterly winds are at their weakest in temperate latitudes of the northern hemisphere. The jetstream, which controls the track of low pressure systems and positions of high pressure systems, is more likely to be weaker and meander polewards and equatorwards, meaning surface winds tend to blow from the south for a time before suddenly switching to a cold northerly from the arctic a few days later, as these meandering waves in the jet stream shift.

One of the most dramatic changes in temperature in the last 50 years was in April 1968. The 29th March that year saw 25C reached at Cromer, an all-time record at the time. But by midday on the 2nd of April, central and eastern England saw a covering of snow, with temperatures close to freezing in a bitterly cold northerly wind. A temperature of -10.6C was recorded at Achnagoichan in Strathspey that morning too.

April 1981, warmest 1st half for 20 years to coldest second half for a century.

Another example of spring warmth followed by a plunge back to winter cold in April, was 1981, where the month saw the warmest first half in 20 years followed by the coldest second half since before 1900.  The temperature reached 22C across southern England between the 9th and the 11th that April, but the onset of cold northerly and easterly winds during the second half of the month culminated in snowstorms sweeping the country between the 24th and the 25th. Particularly badly affected were the hillier parts of the Pennines and Peak District, Wales, The Welsh Border, SW Moors and the Cotswolds. The high water content of the snow combined with gale force easterly winds. Read here for more statistics on the Great April 1981 Snowstorm that occured between the 23rd and 26th that month.

In more recent times, April 1990 fooled many on the 1st, with warm sunshine bringing a high of 21.2C at Heathrow. But a few days later, an invasion of arctic air brought temperatures plummeting from the 3rd, with some notable sharp frosts, including -9.0 at Thame, Oxon, on the night of the 4th. Consecutive nights of severe frosts between the 3rd and the 9th – causing widespread damage to growth and blossoms in orchards.

Early May 1997 cold snap with snow

May can of course produce unseasonably cold weather more akin to late winter or early Spring too, even with snow. May 1997 was notable for a sudden change from summery weather to that more akin to winter. 27C was recorded on the 2nd and 26C in the 3rd in London, it even reached 24C in Edinburgh. Then on the Bank Holiday Monday on the 5th – a cold front swept south introducing cold air from the arctic. Temperatures struggled to get into double figures on the 6th, with snowfall across north Wales, and the Midlands as far south as Worcestershire, snow settled widely across north Wales – with up to 15cm falling in places – causing travel disruption.