What is Lake Effect Snow?

There are many photos on social media this week showing stunning aerial shots of an approaching snow storm cloud, blotting out clear blue skies and also of deep, deep snow, from opened back doors or garages in Buffalo, NY. Parts of Buffalo and just to the south have seen over 5 feet of snow. Driving was banned for safety reasons overnight and people trapped in their cars or trucks were told not to leave their vehicles under any circumstances as the conditions were so bad. Also hit was the eastern end of Lake Ontario, see NOAA image. Westerly wind blowing lake effect snow onto east coast of Lake Ontario, south of Watertown over Route 81 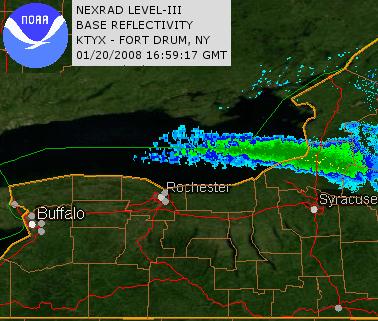 From the NWC warning IMPACTS...INTENSE LAKE EFFECT SNOW AND BLOWING SNOW WILL RESULT IN VERY DIFFICULT OR NEARLY IMPOSSIBLE TRAVEL AT TIMES WITHIN THE MOST INTENSE PORTION OF THE BAND. SOME ROADS MAY BECOME NEARLY IMPASSABLE. IF YOU MUST TRAVEL BE PREPARED FOR  SEVERE WINTER DRIVING CONDITIONS WITH NEAR ZERO VISIBILITY AND DEEP SNOW COVER ON ROADS.

Buffalo sits at the NE end of Lake Erie, just south of Niagara Falls. Depending on the wind direction, Cleveland and the town of Erie on the south side and Buffalo are all prone to Lake Effect snow.

As mentioned in the Synoptic Outlook, central and eastern N.America has seen some unseasonably cold air recently. At this time of year the Great Lakes are still relatively warm, and haven’t frozen over yet. A cold plunge of continental polar air has moved down from Canada and swept across the warmer waters of Lake Erie. The flow for this particular setup was steered by a Low Pressure over eastern Canada. As long as the wind keeps blowing, the lake effect snow will keep coming, with more expected for Buffalo this week. The National Weather Service has a Lake Effect Warning out until midday Friday, so there is more snow to come.

IN LAKE EFFECT SNOW THE WEATHER CAN VARY FROM LOCALLY HEAVY SNOW IN NARROW BANDS TO CLEAR SKIES JUST A FEW MILES AWAY. IF YOU WILLBE TRAVELING ACROSS THE REGION BE PREPARED FOR RAPID CHANGES IN ROAD AND VISIBILITY CONDITIONS.

As the colder air moves over the warmer lake, changes occur in the air pocket over the lake. This first stage is similar to how the haar and sea fret forms off the North Sea coasts. The air at the lake surface warms, but has colder air above it, becomes unstable, as warm air wants to rise. It also contains more moisture evaporating off the lake and becomes saturated. This moist warmer air rises but is being moved along by the wind. A fog will form and as the water vapour rises, and cools it forms snow. All of this is racing across Lake Erie as there is less friction over water. Once it reaches land, at Buffalo everything gets slowed down, piling up at the coast. The air can only go up which leads to condensation and precipitation (snow falling). Also any hills close to the coast will add to this lift, if the wind is strong enough, which it is this week.

So for Lake effect snow you need a long stretch of lake, deep cold air moving across it towards you.  Enough wind, but not too much and this effect is strongest late autumn and early winter. There are certain snow belts around the lakes where this kind of snow storm is more frequent. Here, the locals will be prepared for such events and keyed up to the warning system, but still the photos have been awesome.

Five people have now died in this snow storm, 3 from heart attacks, two whilst shovelling snow and one found buried in his car. The National Weather Service says a year's worth of snow is expected in just a few days over the hardest hit areas. Further snow is forecast and buried vehicles are hampering the emergency services efforts to get through roads. Residents are being reminded by county officials not to drive in ban areas as it hinders the work of heavy equipment operators working to clear the areas of snow, and can add even more stranded vehicles. Erie County is under a state of emergency. Temperatures are forecast to stay below freezing until the weekend, rising to 10C by Monday which could slowly bring a thaw and flooding concerns. 'SNOWVEMBER'