Chilly easterly this weekend, but hints it may turn even colder from the arctic next week

A chilly easterly flow for all over the weekend, with temperatures a little below average, however, next week there are signs that it could turn even colder from the arctic, with an increasing risk of snow later in the week 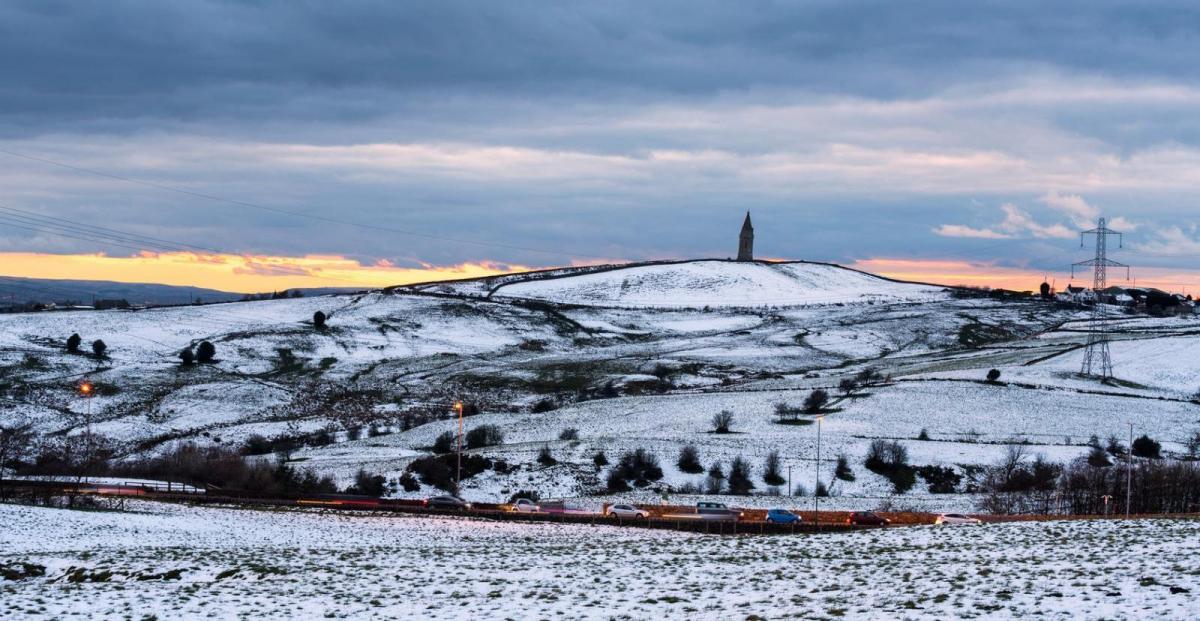 A large and intense area of high pressure over Russia will extend westwards across Scandinavia and in over the Norwegian Sea over the next few days. This will mean an easterly or northeasterly breeze will develop from tonight and strengthening through Friday and into the weekend, particularly across southern and eastern areas. With the air source cold over Scandinavia – where maximum temperatures will struggle to get above freezing, it will turn chillier over the weekend. 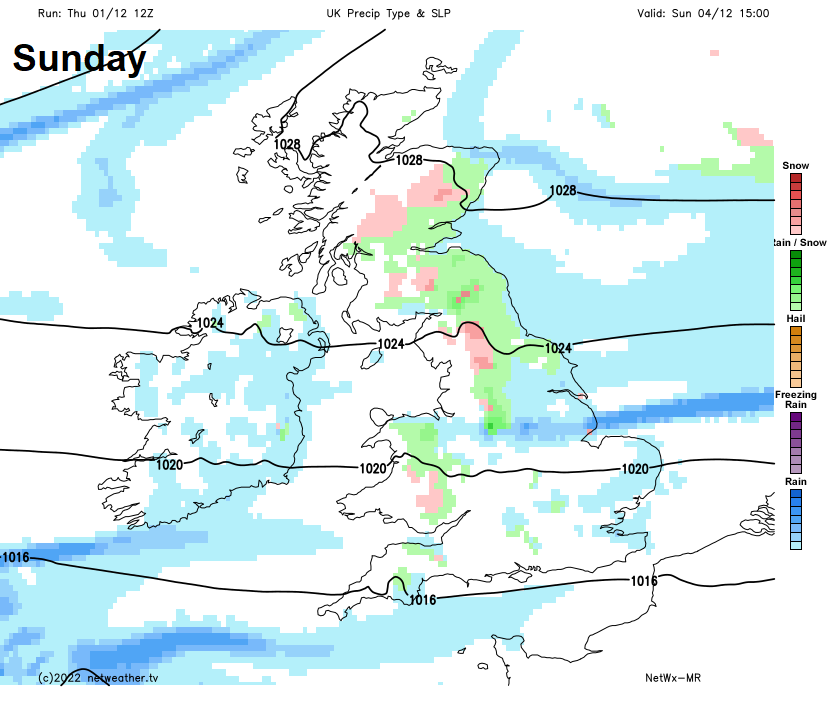 North Sea temperatures range from 10C in the north to 14C in the south – which will moderate the cold air at the surface as it crosses over from the east. But it will still feel colder over the weekend for all, temperatures reaching 5-7C at best on Saturday and Sunday, perhaps 8C along eastern coasts near the slightly warmer seas. But it if you are out in the keen east or northeast wind, it will feel more like 1-3C inland. The chilly feel over the weekend exacerbated by the lack of sunshine for many too, with many places cloudy away from the far west sheltered from the easterly breeze.

And it won’t be dry for everyone either, despite high pressure in charge. A developing upper cold pool / upper trough over Scandinavia and extending down into Germany will drift west over the weekend and steepen lapse rates over the relatively warmer North Sea to allow showers to develop. These showers will move across eastern areas over the weekend and inland across central and northern areas too, perhaps turning wintry over higher ground here. A lingering Atlantic front in the far northwest may continue to bring cloud and patchy rain to northern and western Scotland too.

Then into next week, there are signs that it could turn even colder. A blocking area of high pressure looks to rapidly build across southern Greenland and Iceland area early next week, becoming unusually intense too, while the upper ridge extends across Greenland and over the North Pole through the week. This poleward extension of the high will, in effect, dislodge a pool of deep cold air south from the arctic across Svalbard, Greenland and Norwegian Seas towards the NE Atlantic and Scandinavia by Thursday.

The question is, how far south will the deep cold air get? Will it reach the UK later next week?

There has been a lot of divergence between the weather models earlier in the week over the handling of the development of the Greenland block and what happens around the periphery of the block across NW Europe in terms of how much and how far south cold air will be displaced from the arctic towards the UK.

The American GFS model operational runs weren’t too keen on bringing any deep cold to the UK next week initially earlier this week, while European ECMWF model had been. However, GFS over the last 24 hours or so of its operational runs has joined ECMWF in bringing a plunge of deep cold arctic air south next week, as the Greenland block extends towards the North Pole. However, the progress south of the deep cold arctic air to the UK may be impeded by an area of low pressure moving north from Iberia over a similar timescale during the second half of next week. So although there is increasing confidence on cold arctic air spreading south into Scandinavia and the Norwegian Sea, just how far south it continues is still the subject of divergence between models this evening.

Watch how pressure / heights build north over Greenland to the North Pole, forcing cold air south towards the UK next week

So, there is increasing confidence for some bitterly cold arctic air to move south towards the UK during the second half of next week. How deep the cold will be, normally we look at 850mb temperatures or 850-1000mb (partial) air thickness for depth of cold, is still uncertain.

Chilly easterly flow this weekend, but next week could see even colder arctic air spreading south, how cold depending on low pressure to the south

A 850mb temperature of -8C or below would be considered as deep cold and would, if the surface conditions, such as dew point and temperatures that are moderated by SSTs, are optimal, lead to a greater chance of snowfall at lower elevations away from coasts. Typically, deep cold tends to generate copious shower activity as the cold air crosses the relatively warmer seas on its journey from the north or east towards the UK and if the surface temperatures are cold enough and the surface air dry enough, then these showers falling as snow, even to lower levels with deeper cold. Upper-level disturbances in the flow such as troughs or even polar lows can bring more organised showers or spells of sleet and snow too.

GFS forecast of 850mb temperatures on Friday next week 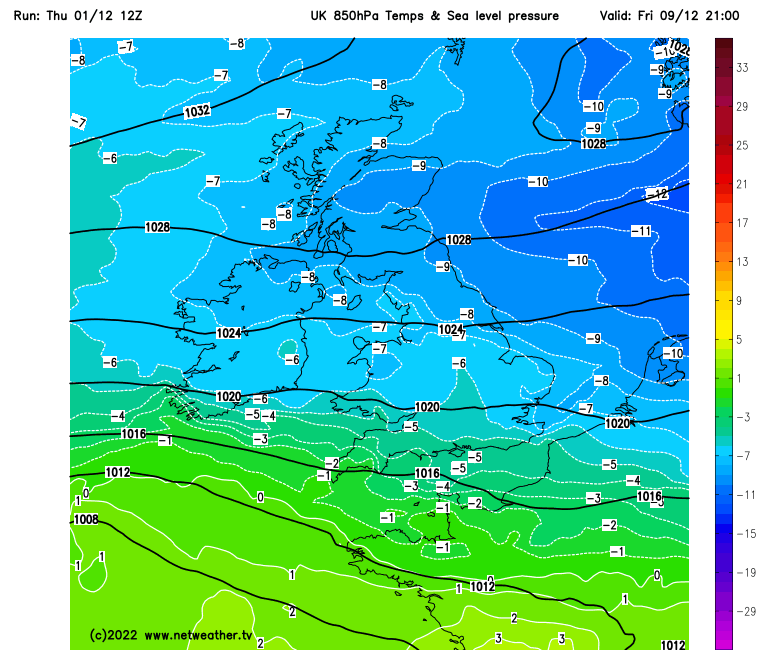 However, 850mb temperatures higher than -5C can still bring snow in situations where temperatures and dew points at the surface are close to freezing with little mixing of the air from milder (oceanic) sources. An example of this is sometimes fronts, often from the Atlantic, moving in and bumping into cold air in place. We may see this happen next week, as that low moves up from SW Europe and its associated fronts bump into the cold arctic air coming down from the northeast.

However, it is too far out to forecast snow at this juncture, other than to say there is the increasing possibility of much colder coming our way later next week and, with it, the potential for snow in places along with temperature dropping into low single figures by day at best and falling below freezing at night.