Severe storms are possible in southern England today but staying drier and less lively elsewhere. Atlantic fronts will then become more frequent visitors during the remainder of the week.

While yesterday's heavy showers and storms, particularly across Yorkshire, Notts and Lincolnshire, have brought some relief from the drought, the hit-and-miss nature of these storms has meant that much of East Anglia and the South East remained dry. But today, it'll be the turn of these areas to see some rain ahead of a return to our more traditional weather from the Atlantic Ocean in the next few days.

The front responsible for yesterday's storms is weakening, leaving a band of mainly light rain across northern and some central parts that'll slowly clear away to the South through the day. Ahead of this, however, we already have a few heavy showers across the Midlands and southern England. These'll develop more widely across southern England and East Anglia through the day, with potentially severe thunderstorms giving local torrential downpours bringing the risk of flash flooding, although not everywhere will be affected. 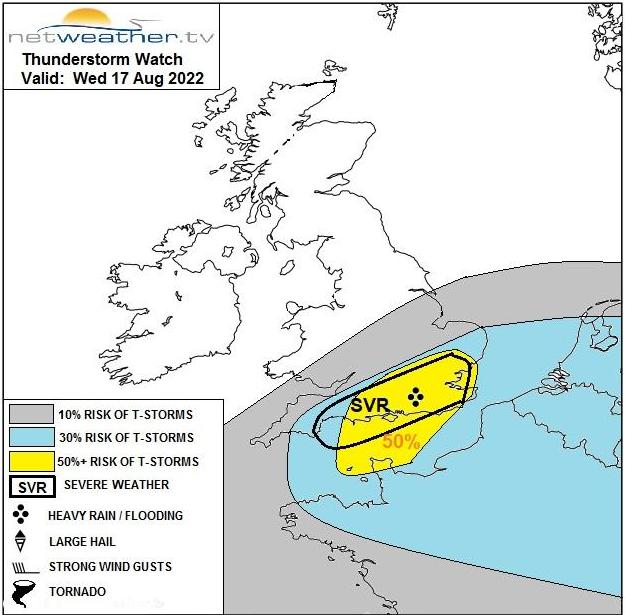 While the East and South are mostly cloudy, a weak ridge toppling into northern parts is giving some sunshine across Scotland and Northern Ireland on a primarily dry day here with light winds. Further East and South, there'll be a northerly breeze, but temperatures will reach 22 or 23C in any brightness despite this. For most, though, it's a cooler, much fresher day, with top temperatures mostly between 18 and 20C but only 15 or 16C in the far North.

While still cloudy into the evening, the showers and storms towards the South East fade, with just the odd mainly light shower remaining here through the night in a mostly light northerly breeze. The remaining parts of England and Wales will be mostly fine and dry in light winds, although cloud will be increasing later in the night towards Cumbria and the West. This, together with a freshening southerly wind, soon brings wet weather to Northern Ireland that spreads to the North and West of Scotland overnight. Lowest temperatures 10 to 15C, but 16 or 17C across the South East.

The East and South East turn brighter for a time tomorrow as a transient ridge moves across, ahead of Atlantic systems moving in. These'll give further welcome rain, much of which once it arrives will probably be light and patchy in the South. Further North and West, the rain will be heavier and most persistent, with a South to South Westerly wind fresh locally strong across Northern Ireland, Cumbria and North and West Scotland. Top temperatures 15 to 18C in the North and 19 to 23C further South.

There'll be further rain at times during the evening and overnight, some of it heavy in the North and West, but further South, it should be lighter generally and patchy. Across Northern Ireland and much of Scotland, the rain should clear to scattered showers, but these too could still be heavy in the West. A South West wind remains fresh to strong and blustery in the North and West, but temperatures shouldn't fall below 14 to 16C across most of England and Wales and 11 to 14C further North.

The remainder of the week will be mostly Atlantic driven, with the wettest, windiest weather in the North. Further South, after some rain initially, it'll tend to be brighter and drier generally, with hints of summer returning every now and again.