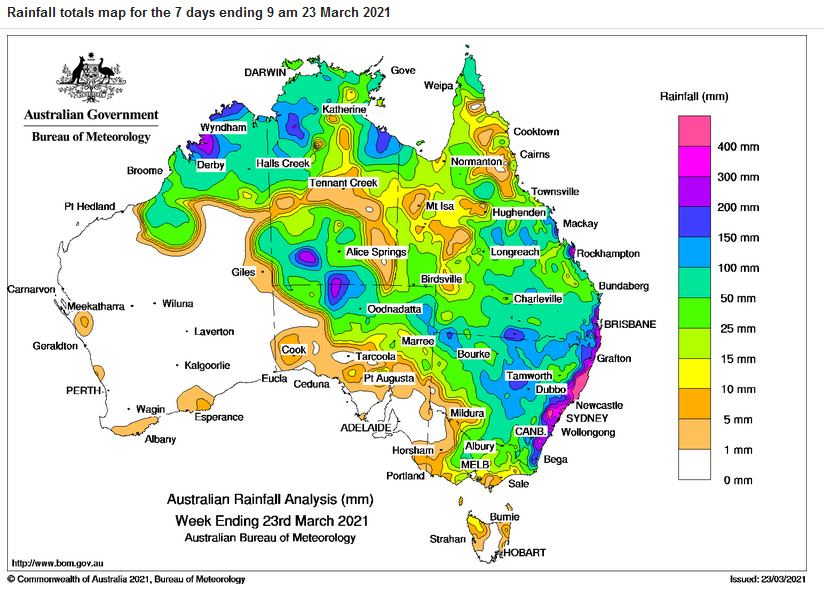 If you want to see extreme weather in action think about Australia in the past two years. Harsh drought with the hottest & driest year on record in 2019, leading to devastating bushfires and yet now vast swathes of eastern Australia are underwater in an ongoing rain event that has affected 10 million people. The population of Australia is around 25 million. A coming together of two major weather systems anchored and blocked by a high pressure in the Tasman Sea to the southeast has resulted in a week of heavy, unrelenting rainfall. With “abnormally high tides” and a push along the coast from east to northeast winds, inland areas look like huge lakes. Weekly rainfall totals from this, up til Monday 22nd were 889mm and 922mm in New South Wales (NSW) and 878mm QLD. This is three times the monthly average rainfall.  Sydney saw over 100mm of rain on Sunday with another 50mm on Monday. From this event, an "isolated, extremely heavy daily rainfall total of 550 mm was recorded in the Capricornia District in Queensland" BoM. One day's rainfall.

Every state and territory bar Western Australia has been impacted. The news and social media images have been astonishing and as the weekend passed the Bureau of Meteorology BoM said “it may have been going for days but unfortunately this situation is far from over” on Monday 22nd.

There have been mass evacuations as people fought to protect their properties and save their belongings, vehicles even livestock. The water has passed levels seen in 1961, when other major flooding occurred, with talk of a 1 in 100-year event.

“Major flooding higher than the 1961 event expected along the Hawkesbury River” State Emergency Service SES announced in their evacuation order, for the main waterways around the Greater Sydney area. Residents are waiting to see if they will be affected by the rising floodwaters like so many others in NSW. Rivers have burst their banks, there have been landslides with trees down and fallen power cables in parts of NSW. Some have lost their homes, others looking at sludge left by waters up to 1m high that have retreated but might return, should they begin the cleanup or wait?  Nearly 20,000 people have been told to leave their homes, to evacuate and do it quickly before being cut off. 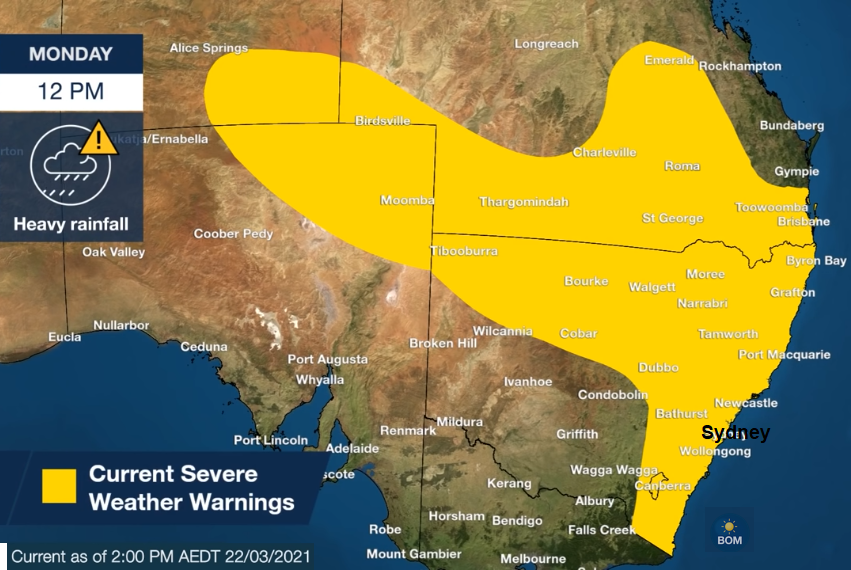 It is unusual to see such a flood event inland and the weather warning into Tuesday show about 2/3rds of NSW, ACT and part of Queensland QLD under a weather warning.  The SES is warning people not to walk, ride or drive through floodwaters whilst trying to evacuate. This is the main cause of death and injury during flood events.

People had been preparing as the rain set in, putting belongings on tables and beds with electrical items on top. Turning off the electricity and gas, keeping in contact with neighbours and listening to local radio announcements.

Once the evacuation was ordered or people decided enough was enough, the advice was to take warm clothes, medicines, documents and valuables. Take pets, drinking water and enough food for 3 days then either head for family/friends, an evacuation centre or just high ground.

Some people couldn’t get out and needed to be rescued from their homes, others from vehicles after driving into floodwaters or being sideswiped by the force of the flow. Many farm animals and horses have perished and there are reports of snakes and spiders scrambling onto fences and houses, even onto people's makeshift rafts to escape the water but become unwelcome guests for those already traumatised by the floods.

Schools remain closed, businesses wrecked, homes destroyed and for some, this is after being hit by the wildfires 18 months ago. On farms, crops are underwater, winter silage soaked, animals that have been moved to higher ground are now stranded and still need feeding or milking. Some people have had to flee, others are sitting waiting and watching.

A tropical low off the northern coast of Western Australia has been combining with a coastal trough off the NSW coast. Rather than the usual movement eastwards, they have been halted by high pressure to the southeast, in the Tasman Sea. Around this, there has been a strong flow onto the east coast with widespread and persistent rain. With plenty of moist tropical air digging down over NSW, the coastal trough also deepens, and the resulting low pressure brings even more rain to southern QLD, NSW particularly along the coast. The high in the south does begin to give way and the low is then forecast to shift away to the SE, leaving drier conditions by Wednesday after a very wet, stormy Tuesday.

There had already been a huge amount of rain but with this developing setup, the high tides, damaging surf and strong winds there will be further life-threatening impacts as the worst of the rain hits the east coast and then shifts south past the Australian Capital Territory (ACT) and damaging winds with the rain for coastal SE Victoria and Tasmania. 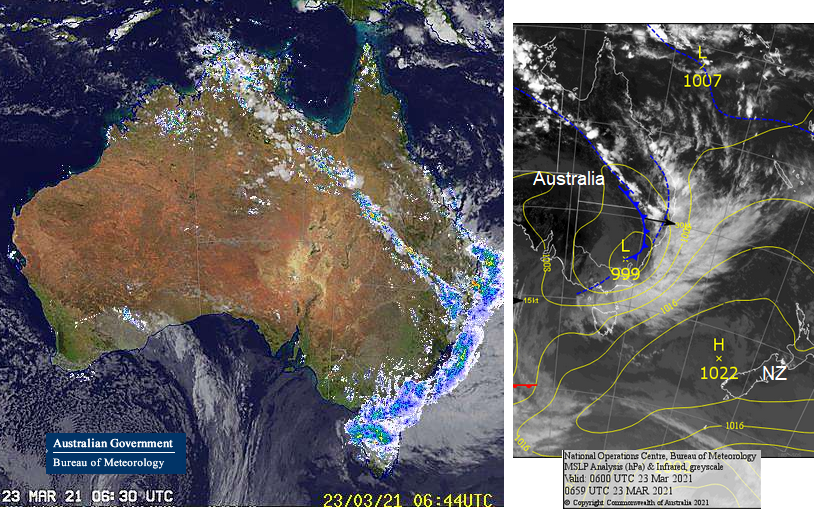 In Australia’s latest State of the Climate report from 2020, there has already been an increase in the intensity of heavy rainfall events in Australia, As the climate warms these events are expected to become even more intense.

It’s a complicated picture of extreme weather with an overall warming and an increase in the frequency of extreme heat events and fire weather. There have been decreases in rainfall totals for some parts, in the winter months but an increase in heavy rainfall events usually associated with thunderstorms, cyclones and east coast lows. Thunderstorm activity for northern Australia has increased as low pressures over southern Australia have decreased leading to drought conditions and water rationing.

A warmer atmosphere can hold more water vapour thana cooler one. More moisture means more energy and both lead to the likelihood of further intense events in the future. One sentence from the FUTURE section stands out

This wasn’t short, this got stuck something we’ve seen in NW Europe with blocking highs and an Atlantic jetstream either firing a succession of low pressures at the UK or long dry, warm sunny stints with high pressure nearby. 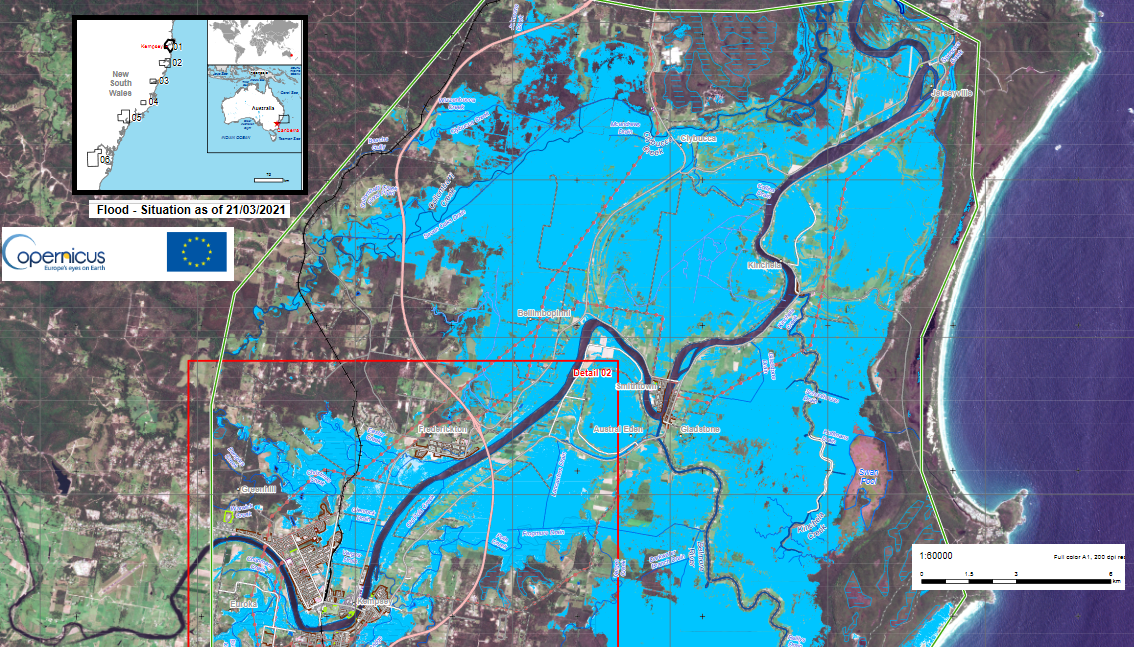 State of the Climate 2020 “However, the warming trend, primarily caused by climate change, increases the likelihood of extreme events that are beyond our historical experience... a continuing trend of more frequent compound extreme events. “ 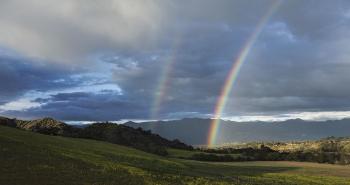