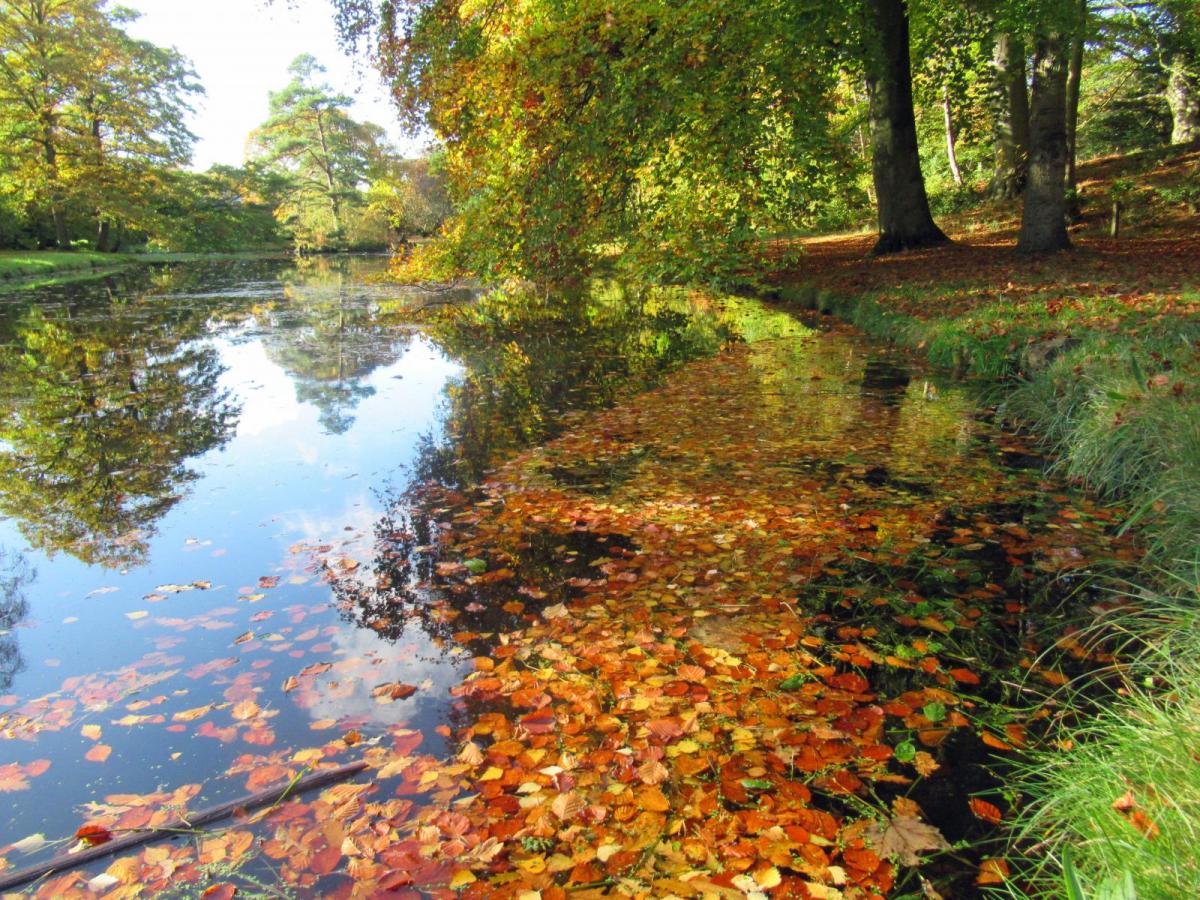 It has been very mild overnight with temperatures staying around 17c all night in the SE. Many parts of England and Wales remained well into double figures. A cold front is moving over SE Britain this morning so it will feel fresher everywhere by lunchtime. There will be clusters of heavy showers and pulses of rain moving in from the west, even into Tuesday morning, but the weather will be settling down and become colder but drier for the middle of the week. Good news after all of October’s rain. 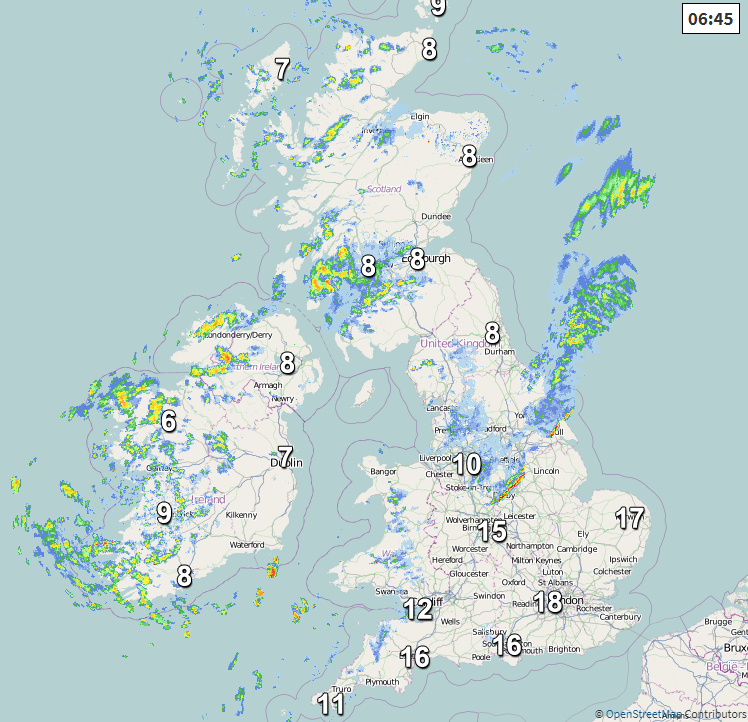 After a weekend of gusty winds and heavy rain thanks to Storm Aiden and the remnants of hurricane Zeta we are now in a time of transition towards midweek high pressure. The patchy frontal rain moves eastwards over East Anglia, London and SE England this morning and it will be windy for England and Wales. There will be sunny spells with heavy showers blown in from the west, mainly for NW England but also a scattering for Wales and the West Country. It will feel colder in the brisk wind and there could be thundery bursts in the showers. 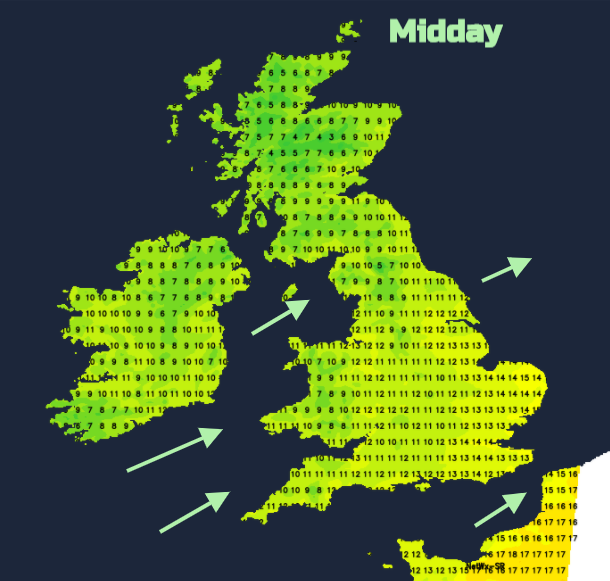 There are still numerous flood warnings in place today with the River Ouse and Severn getting a particular mention. Scotland and Northern Ireland have a cooler start for Monday with bright spells and plenty of showers. They move in from the west on a gentle breeze with Grampian being more sheltered. Temperatures will be up to 10C. The forecast of drier, more settled conditions will be welcome for western Scotland where it has also been very wet this weekend. 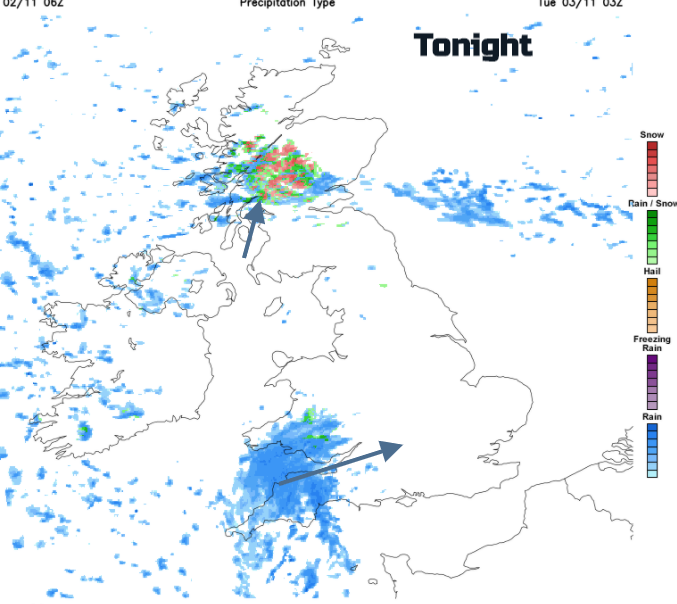 As it gets dark, a more organised band of rain will move up from the south into Northern Ireland and get going over NW England and the north coast of Wales. This pushes up over the Pennines, through Cumbria and into SW Scotland during the evening. The temperatures fall away, well down into single figures. It will be much colder tonight than last. The precipitation will turn wintry inland for the Scottish mountains. Another area of rain heads into SW England around midnight, clipping southern Wales too. As a small low pressure forms, there will be blustery winds for a time along the Channel coast. This rain area will keep a bit more cloud over southern Britain and temperatures around 7 or 8C 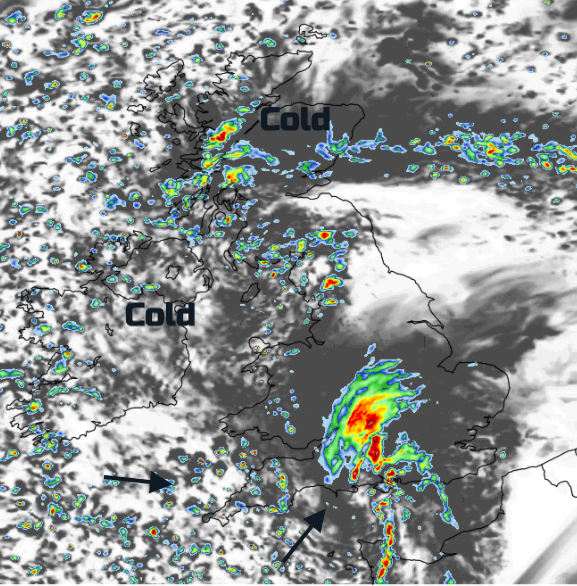 Through Tuesday morning the low centre and its rain moves across southern England and southern parts of the Midlands towards East Anglia and the SE. There will be a spell of rain and blustery winds before this clears away over The Wash at lunchtime.

The band of rain and mountain snow over central Scotland becomes more showers in the morning but still with an icy tinge. The Cumbrian Fells even the tops of the Welsh mountains may see wintry bits as Tuesday starts on a cold feeling morning.

The winds veer to the west and then northwest through the day adding to the chilly feeling. Scattered showers continue to move in from the west but for many, there will be a lot of fine, bright even sunny weather about. Showers persist over the NW Highlands, a few reaching down the Irish Sea to coastal Wales but elsewhere it becomes drier, calmer and cold. This brings the risk of frost and fog for early November.

The settled spell lasts for several days with light winds from the west backing to the east from Friday. Quite a change after all that rain and the bizarre warm air for Monday morning.