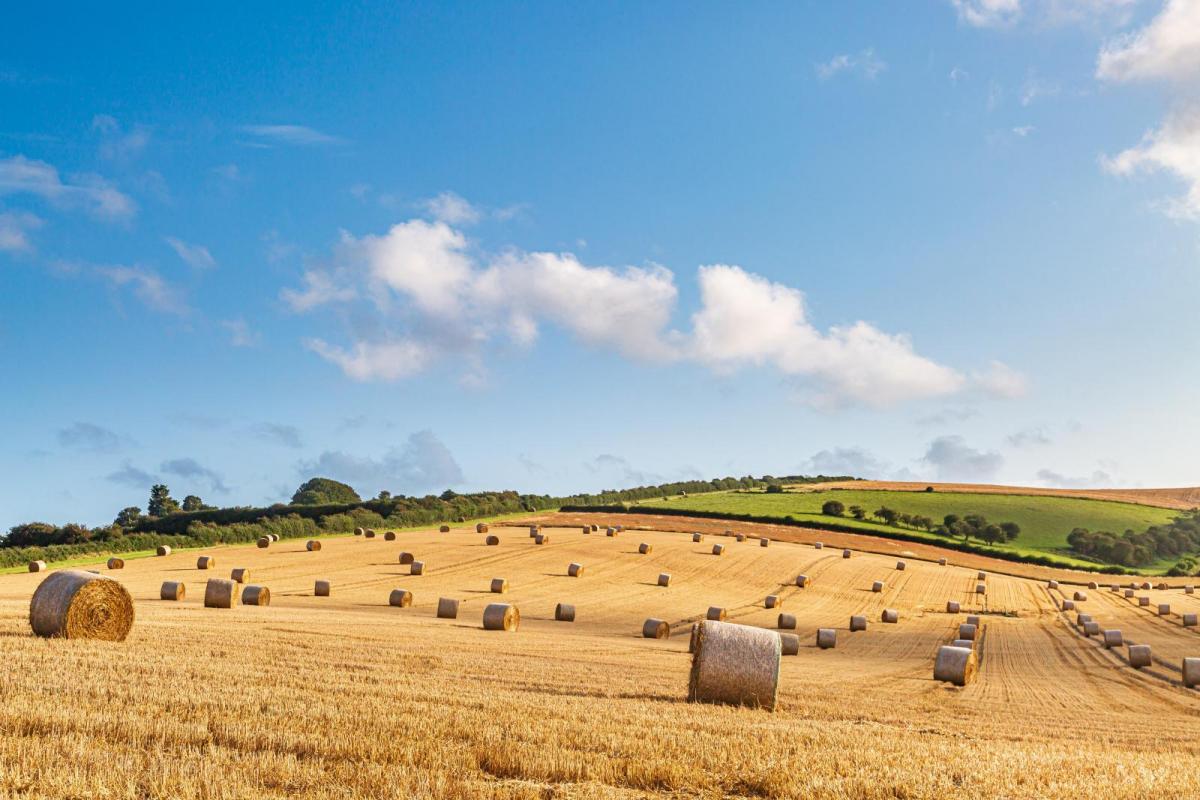 A lull before midweek rain and a wet weekend

Tuesday will see a lull before the first bout of blustery Atlantic rain moves in this week. A low, for Friday into the weekend, continues to look significant particularly for its rainfall. Today there will be fine, bright weather, not as warm as on Monday and there is still the overnight cold front to get rid of. 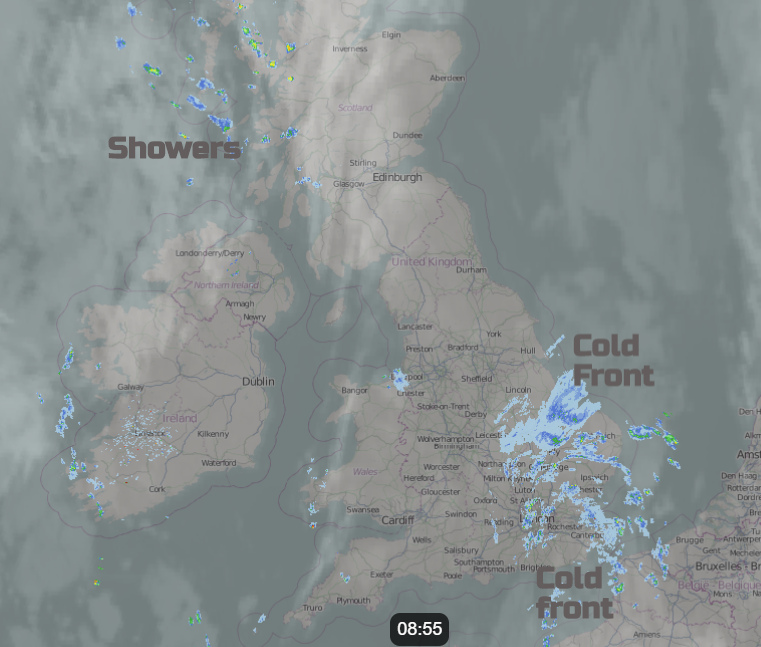 The band of cloud and patchy rain is over SE Britain this morning and has kept the temperatures up. Parts of northern Britain and Northern Ireland have seen clear skies, even glimpses of the Aurora overnight and so another chilly start this morning. There is some fog about first thing thanks to the nip in the air and hardly any breeze. There are already a few showers in the far NW of the UK but overall, today will be a fine day with sunshine, light winds and temperatures in the mid-teens. Depending on the clearance of the frontal cloud temperatures in East Anglia, SE England and Hampshire could reach around 18C. There will be some showery rain lingering for Kent, Norfolk and Suffolk into the afternoon. 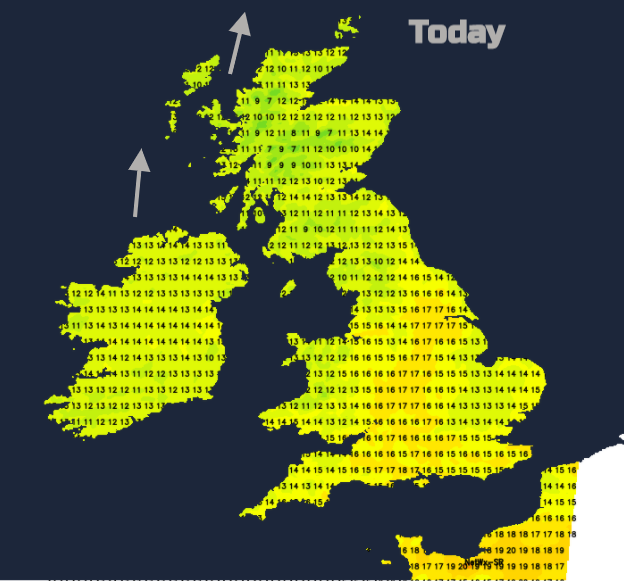 By this evening there will be a moderate southerly breeze through the Irish Sea, for the west coast of Scotland and Northern Ireland but calm over Britain. As a low pressure heads in from the Atlantic rain will spread over Ireland tonight as the winds pickup. The fronts will spread rain eastwards over Britain during Wednesday but pivot over Scotland resulting in higher totals here. 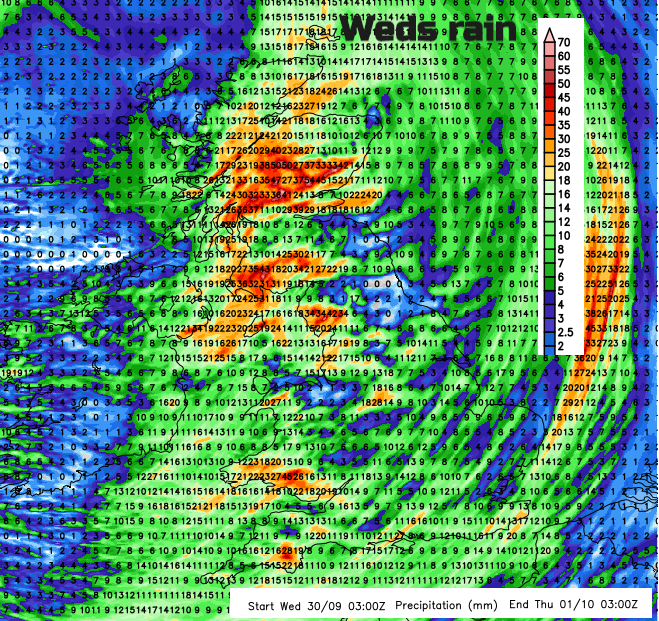 With heavy rain overnight, Northern Ireland will brighten up on Wednesday but first thing the rain will still be over Belfast with strong southerly winds which ease and veer to a westerly. Temperatures around 13C with lots of heavy showers from the west. These merge to rain as the bent-back occlusion moves through. Central and eastern England have a fine, even sunny start but the cloud soon increases from the west before the rain arrives. Western Britain and the Central Belt of Scotland start the day with outbreaks of rain which become heavier for a time as the cold front moves eastwards. Heavy rain reaches western Wales and SW England by lunchtime, more over NW England and Scotland with outbreaks getting to London by late afternoon. The brisk southerly winds will be strong around western coasts with gales for the far north of Scotland. Gusts around 60mph for exposed coasts and hills in the west and north before the winds veer to the west then a cooler north-westerly later in the day. Rain continues to affect many parts of the UK on Wednesday afternoon with the heavy rain on the cold front clearing SE England during Wednesday night but rain lingering for Scotland into Thursday morning.

Thursday will be quite mixed, feeling cooler with clusters of heavy showers appearing but there will be bright or sunny spells in-between. The winds will have eased down too.

So, the end of week low. Firstly, the forecast is still changing. There looks to be a few days with heavy rain and strong winds at times. The position of the low has been shifting with Sunday’s weather also looking wet and windy now. It will feel cold with the heavy rain and winds particularly for eastern Britain as the wet weather comes around the low off the North Sea although bands of heavy rain will swing westwards too. 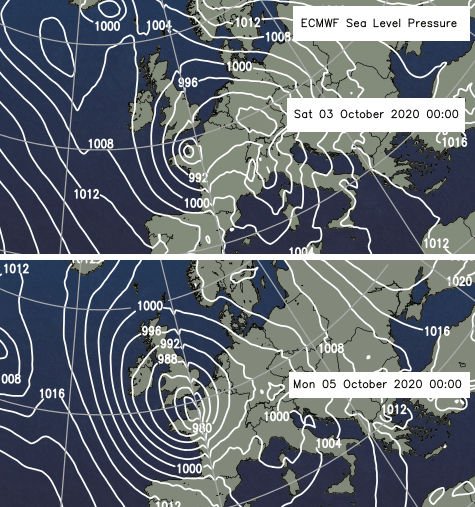 The issue with this set up is that the low centre doesn’t look like it will shift, caught up in a large meander in the Jetstream. These kinds of scenarios lead to heavy ongoing rainfall over Europe and so the risk of flooding.