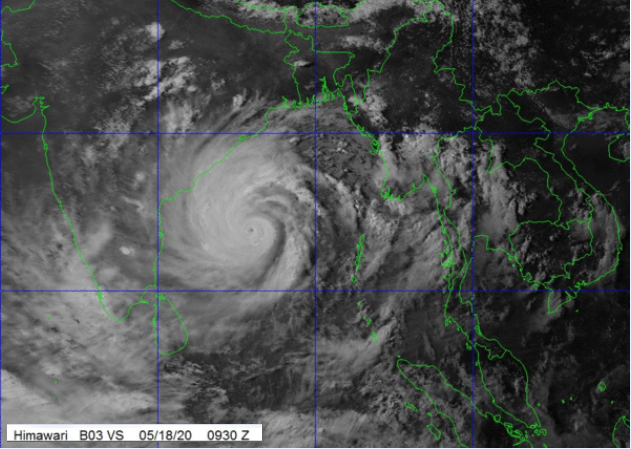 Cyclone Amphan - Super Cyclonic Storm in the Bay of Bengal

Amphan is a huge cyclone heading north in the Bay of Bengal. A super cyclonic storm, the highest category on the scale for that region. It is forecast to hit West Bengal, possibly near Kolkata (formerly Calcutta) also affect north Odisha coasts and Bangladesh on Wednesday 20th May 2020

Tropical cyclones and their storm surges are particularly severe in this area. The combination of low-lying areas of Bangladesh and NE India, the narrowing of the sea area, funnelling the push of water ahead of these immense low pressures as they intensify over very warm waters. The intense winds shove and move the water over increasingly shallow seas. The land is highly populated and has been highlighted as even being even more vulnerable as our climate changes. However, there has been investment in Bangladesh over the past 30 years to reduce the huge loss of life that accompanied historical cyclones with half a million deaths in 1970 and nearly 139,000 in 1991. New cyclone shelters which double as schools in places, embankments have been rebuilt and land replanted and better warning systems. In recent years, super cyclonic storms have still killed 410 in 1997 and 4234 in 2007 but these are not the immense figures of the past.

Back in Oct 1999 Odisha (formerly Orissa) was hit by a super cyclone and nearly 10,000 people died. This Indian state is SW of West Bengal and also vulnerable to tidal surge and flooding near the top end of the Bay of Bengal.

BULLETIN NO.: 20 (BAY OF BENGAL 01/2020) 1730 HOURS IST , 18.05.2020 INDIA METEOROLOGICAL DEPARTMENT
“ The Super Cyclonic Storm ‘AMPHAN’ (pronounced as UM-PUN) over west-central and adjoining central parts of South Bay of Bengal moved nearly northwards …It is very likely to move nearly northwards for some more time and then north-north-eastwards across northwest Bay of Bengal and cross West Bengal – Bangladesh coasts … during the Afternoon / Evening of 20th May 2020 as an Extremely Severe Cyclonic Storm”

There are heavy rainfall and wind warnings from IMD, the Indian Meteorological Dept and a forecast of a storm surge between 3 to 5 metres around landfall. There are slight variations in the forecast models, some slightly eastwards but overall a fairly consistent message about path and intensity.

"NDRF (India's National Disaster Response Force) has deployed 26 teams in Odisha and West Bengal and additionally teams are en route to these States. The teams are equipped with boats, tree cutters, telecom equipment etc. Rescue and relief teams of the Army and Navy along with ships and aircraft of the Navy, Air Force and Coast Guard have been put on standby...Cabinet Secretary directed that all necessary measures be taken to complete evacuation of people from low lying areas in cyclone path and maintain adequate quantities of essential supplies such as food, drinking water and medicines etc. "

As Cyclone Amphan ploughs northwards there is also the global pandemic of COVID_19 to contend with. Plans for potential mass evacuations and people heading to shelters now move up in priority above the invisible virus’s danger. This area exists under the shadow of cyclone devastation. From tropical wind and rain but it is the storm surge that is most deadly. Even once the cyclone moves inland there can be deadly flooding as the rains meet the Himalayas and then famine, lack of clean water and so disease will follow. Millions can be displaced, and refugee camps then face the usual problems and COVID. 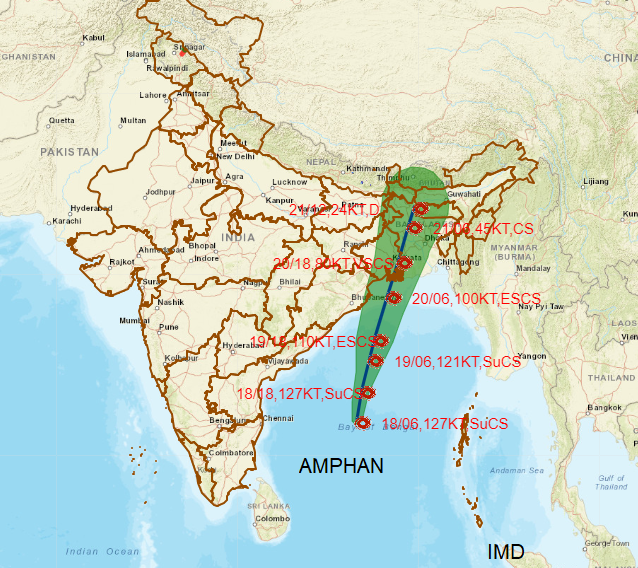 The Cyclone season is pre and post-monsoon, so April and May and also October until mid-December. Across in the Atlantic, the season has begun with Tropical Storm Arthur affecting North Carolina on Monday before heading out to sea.

Thread in the Netweather community forum about tropical cyclones and hurricanes.