In the aftermath of Storm Dennis’s rain, and Storm Ciara before that, resulted in serious ongoing flooding in February 2020. After huge amounts of water, the flood defences on the River Severn were compromised with overtopping at Bewdley. What no-one wanted to see in the forecast was more warnings of wet and windy weather for another weekend.

The Environment Agency, in its five-day forecast, continued the Severe Flood risk on the River Severn at Ironbridge. The red area “The flood barriers at The River Severn at the Wharfage, Ironbridge have been compromised and cannot prevent flooding of properties.” Also a risk of Danger to Life flooding for River Severn in Telford and Wrekin, Shropshire and Worcestershire. This was the setting for the last storm of February 2020. 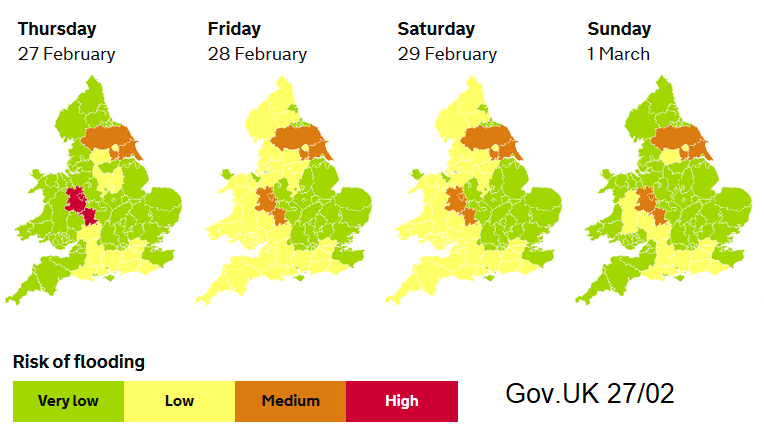 Yellow and Amber areas “Less severe flooding will then be ongoing for this part of the River Severn at least until Monday 2nd March. Flooding on the lower River Aire in Yorkshire is expected to continue for the next five days. New flooding from surface water and rivers is probable from Friday afternoon into Saturday for Wales and parts of the north, south-west and possibly south-east of England, due to further heavy rain. Local coastal flooding impacts are also possible for parts of the south coasts of England and Wales on Saturday and Sunday due to gales and large waves.” 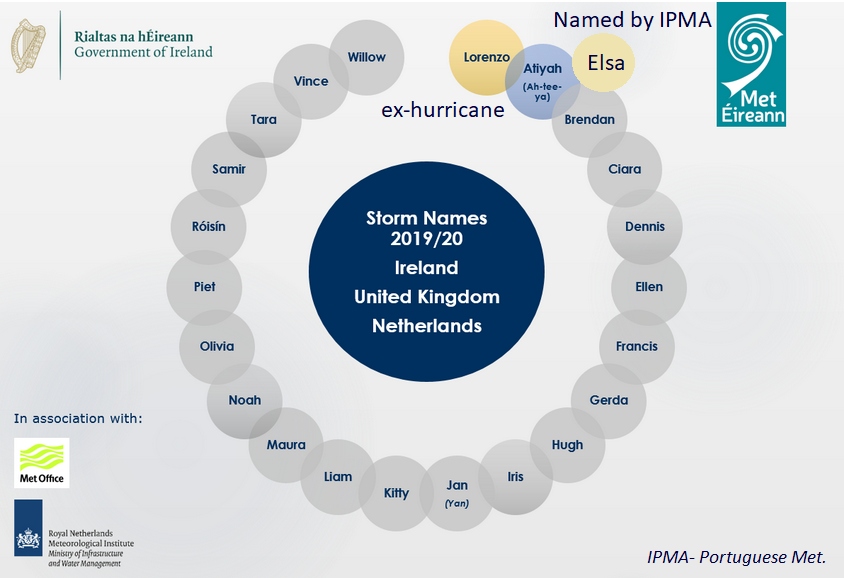 So the next name on the list would be Storm Ellen. Met Eireann had issued an Orange warning for wind for an approaching low pressure at the weekend. However, before that, a different national Met service had named the same low. This does happen and there is a convention across Europe that the Met Services will use the first name. Storm Elsa was named by the Portuguese Met Service back in December 2019 #FMA_Elsa which brought wet and windy weather to the UK and Ireland.

AEMET, the Spanish Met service got in early on the morning of 27th February and named the large low pressure heading for the UK and Ireland – #BorrascaJorge. With concerns for gales and high seas to Galicia and parts of Cantabria and along with more widespread rain. They name storms with Portugal and France, just as the UK name with Ireland and the Netherlands.

The UK Met Office already had heavy rain warnings for Friday into Saturday for this low, along with the flooding concerns. Wind warnings also appeared and Met Eireann issued an Orange wind warning which would usually have resulted in a named storm. This became a red warning for western counties with gusts of 90mph forecast on Saturday afternoon. 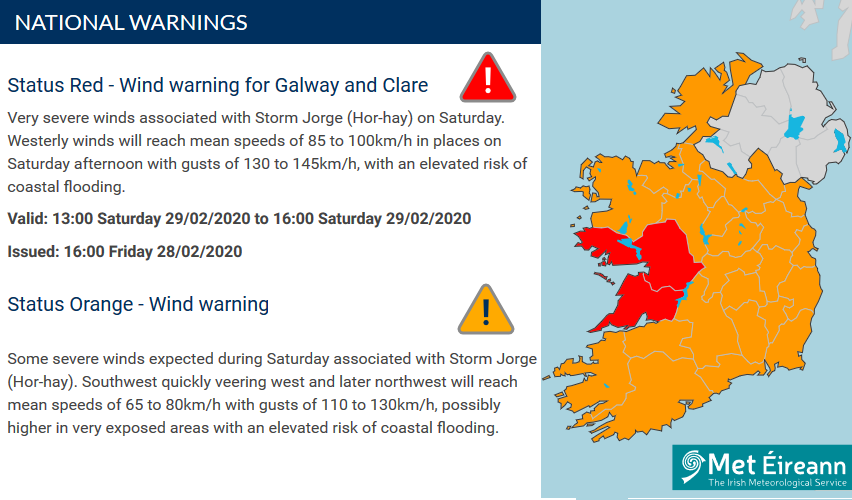 So this event was #StormJorge  (hor-hay not George). It is slightly strange that AEMET decided to name a low centred over NW Europe. The cold front did bring strong winds and large waves to the NW of Iberia and rain, with another low centre continuing the unsettled weather. But early bird catches the worm (storm name). 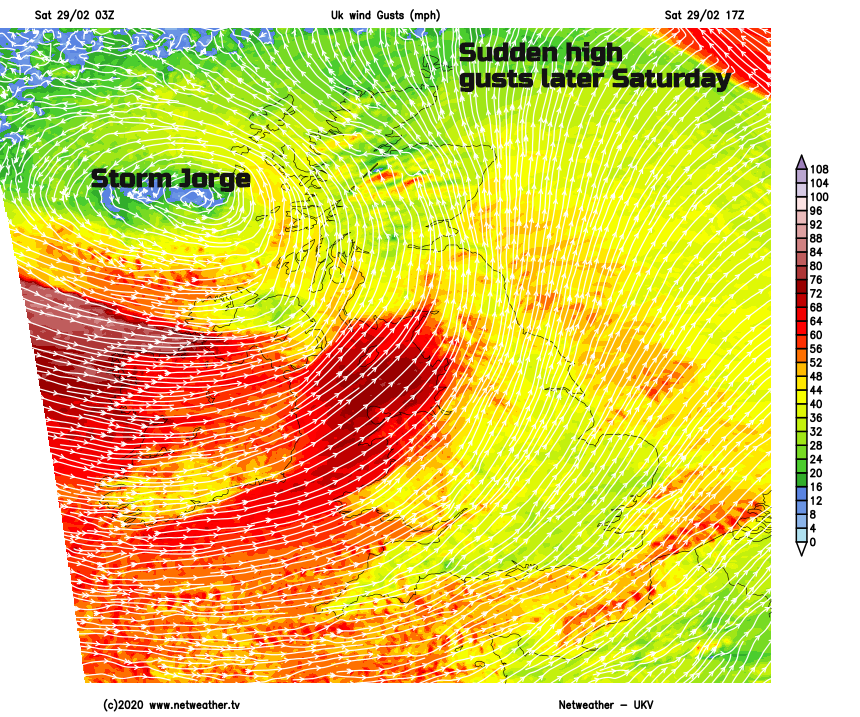 There were numerous rain warnings from Friday into Saturday morning. Also, wind warnings for Saturday into Sunday. “A spell of strong winds is expected to move northeast across a large swathe of the UK through Saturday afternoon and Sunday morning.” along with snow warnings for Scotland, mainly over the hills. Again there was disruption to transport, in some areas flooding still lingering from earlier events. Ferry services were affected with the strong winds on Saturday 29th, particularly for Ireland with some snow over the Yorkshire Dales and Scottish mountains.. 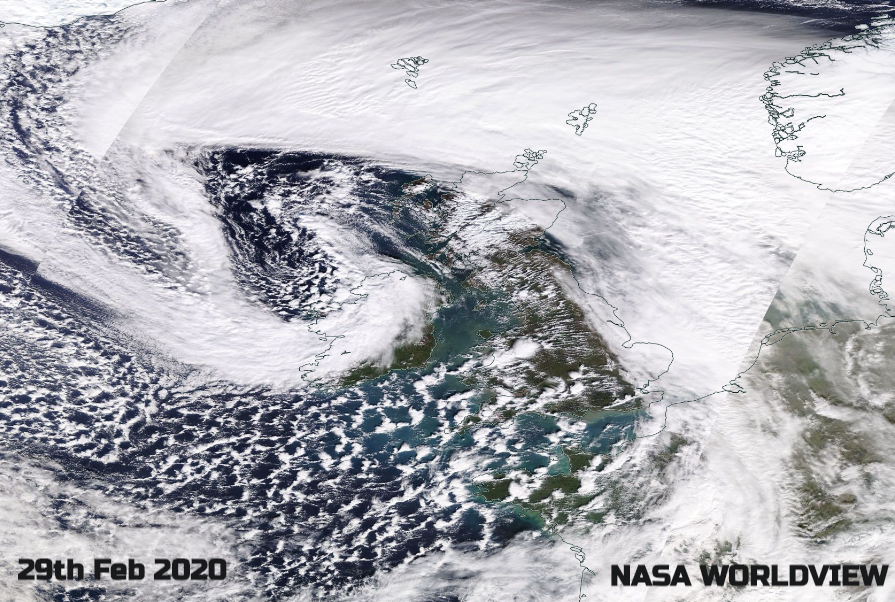 Another dose of heavy rain meant more water flowing into the already high rivers. The Environment agency continued to work with council staff and emergency teams around the clock to secure the flood defences. It took until the next week, early in March for the river levels to significantly fall.

Or the whole Name our Storms project on the Netweather community forum.