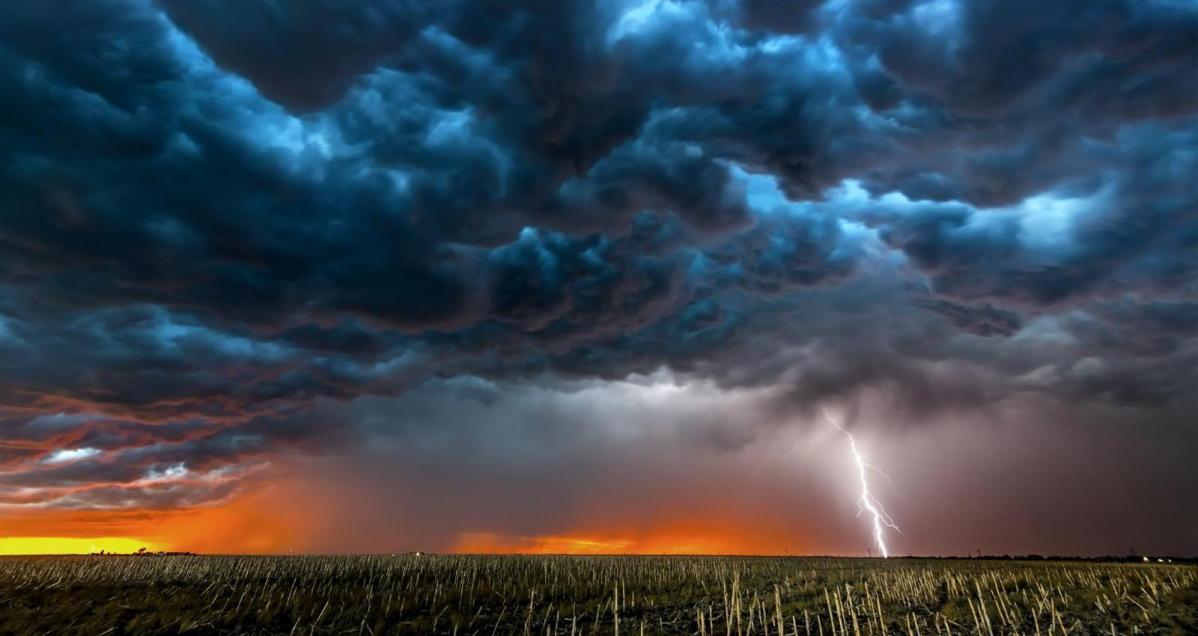 Monsoon Weather Systems Around The World

The monsoon for many is probably synonymous with very heavy flooding rainfall that affects Asian sub-tropical countries such as India, Bangladesh, Sri Lanka and Thailand at certain times of year. However, a monsoon (from the Arabic mawsim, which means "season") is more than just heavy rain, it is a seasonal change in large scale wind circulations over certain areas of the world, these changes occur when the temperature over land is significantly warmer or cooler than the temperature of the oceans. The seasonal reversal in winds corresponds to changes in precipitation distribution, so technically a Monsoon refers not just to the rainy phase but also the dry phase of the seasonal phenomenon. 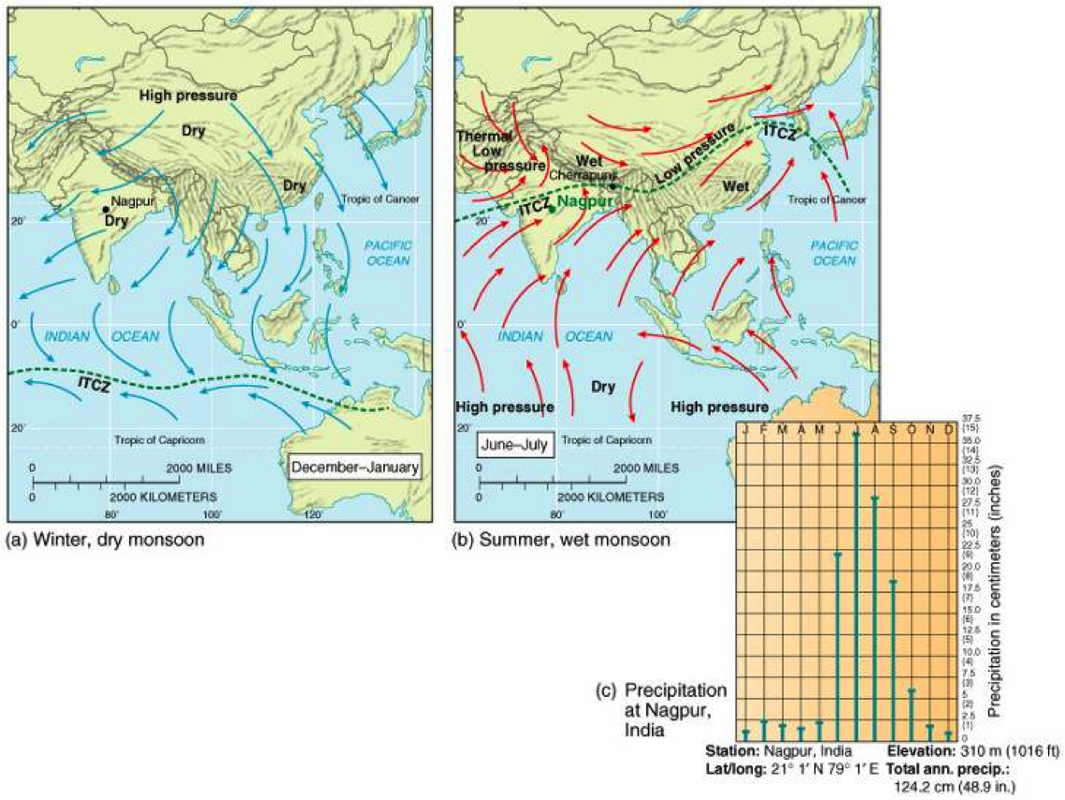 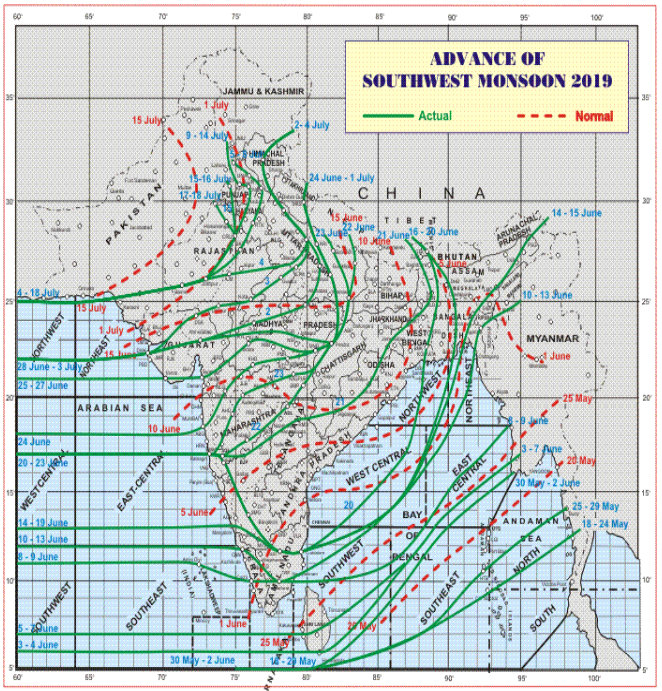 The basic principal behind the shift in the Monsoon circulations each year is linked to rapid heating of landmass during warmer months of the year compared to oceans, as the air temperatures over oceans remain more stable, due to greater thermal capacity of water. So, most of the time during the summer, the land is warmer than the ocean, warm air rises over the land which allows air to blow in from the oceans to replace the void created by rising air over land. This occurs on a large scale over certain parts of the world, with moisture laden winds from the warmer oceans, warmer air holding more moisture, blowing inland and rising to form rain clouds, with perhaps around a quarter of the globe experiencing a monsoon climate. 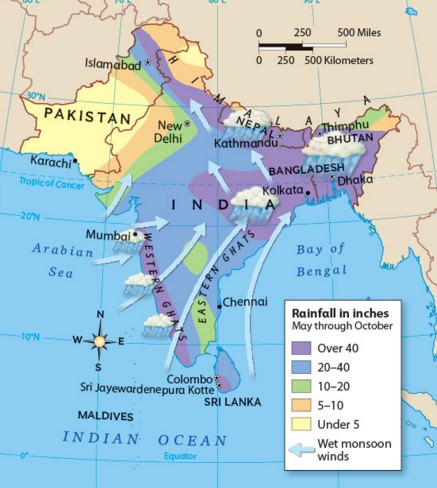 The most well-known monsoon is the one that affects countries around the Indian Ocean, where the summer monsoon sees low pressure develop over the Indian Sub-continent due to hot air rising, this allows warm, moist air from the southwest Indian Ocean to blow inland across India, Bangladesh, Sri Lanka and Myanmar to replace the air rising, bringing torrential rainfall to these areas, particularly across windward slopes of higher ground.

Southern and southeast Asia are heavily reliant on the monsoon rains each summer, as the summer monsoon delivers 70% of India’s annual rainfall which replenishes wells, aquifers and rivers after half the year of little or no rainfall between October and May. Monsoon rains are crucial for farm output and economic growth, as about 55% of India’s arable land is rain-fed, and agriculture forms about 15% of a $2.5-trillion economy that is the third biggest in Asia. Monsoon rains feeding into rivers are also crucial for hydropower, making India less reliant on other more expensive sources to produce electricity.

However, the onset and spread of the summer monsoon rains can be unreliable year-to-year. This year, so far, the Indian summer monsoon has progressed more slowly than usual, hitting the southern state of Kerala a week late, a cyclone in the Arabian Sea not helping by drawing moisture from the monsoon and weakening its progress. The monsoon rains typically cover half of India by mid-June, this year its only covered a quarter.

That said, at the beginning of July,  when heavy monsoon rains did reach the west coast of India, Mumbai saw its heaviest rain in a decade, causing at least 30 deaths, 22 killed when a wall collapsed. 375mm (14 inches/ 1.2 feet) was recorded falling in Mumbai in a 24 hour period starting Tuesday morning, triggering massive road, rail and air disruption in and around the city.

More recently, torrential monsoon rains have reached the north and northeast of India, Nepal and Bangladesh, lkilling more than 130 people and displacing millions of others.

Cherrapunji, in the mountainous northeast Indian state of Meghalaya in India, is one of the rainiest places on earth when the summer monsoon finally arrives, with an annual rainfall average of 34 feet.  Back in 1861, Cherrapunji got over 87 feet of rainfall during the year with 30 feet of it falling in July alone.

Apart from the Indian subcontinent monsoon, of which the southwest monsoon brings the heavy rains each summer, there are several monsoon systems throughout the globe. 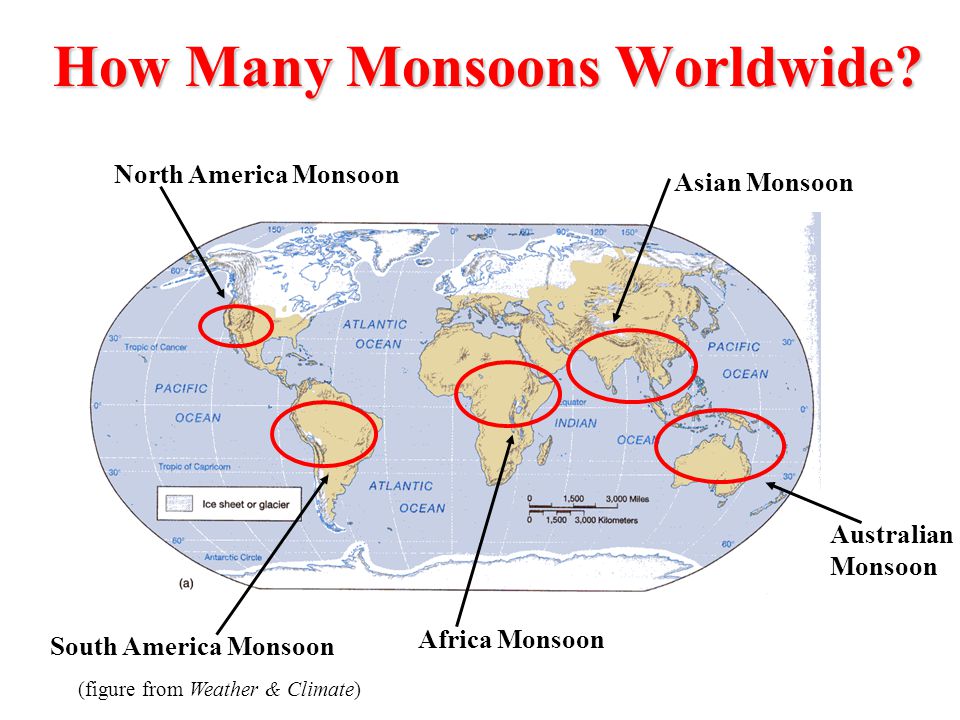 Southeast Asia and northern Australia are affected by one monsoon system which is separate from the Southwest Asian monsoon that affects India and adjacent countries as heavy rains that affect Northern Australia and adjacent islands in the southern hemisphere occur from December through to March – when it is summer here and temperatures are highest over land areas. The low pressure circulation bringing the monsoon rains to southeast Asia starts off in June, July and August before the cyclonic circulations shifts southeastwards to just north of Australia by December and stays until March. 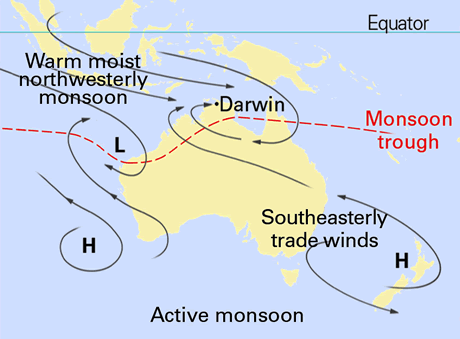 This affects the desert areas of the southwest states of the USA and NW Mexico. It is not as strong or persistent as it’s Indian counterpart, but it share the characteristic of a shift in wind patterns during the summer, which occurs when intense heating in the summer over the deserts of SW U.S. and NW Mexico causes low pressure to form, allowing winds to reverse and start to flow inland from the oceans. By early July, pulses of warm moist air at lower levels surge inland to these deserts from the eastern Pacific as a result, while upper level winds from the east transport moisture from the Gulf of Mexico too. This leads to an increase in thunderstorms, which can be brief, but can unleash torrential rains that cause flash-flooding across parts of the deserts. The strong outflow winds from these storms can also cause Haboobs, which is where the strong winds blowing well ahead of the storm and it’s heavy rain whips up sand from the deserts to form large dust storms – which can sometimes engulf large cities – such as Phoenix and Tuscon in Arizona. 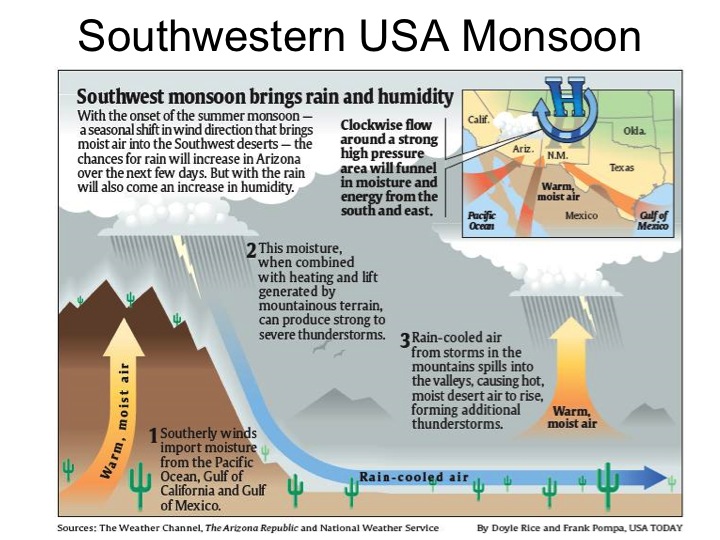 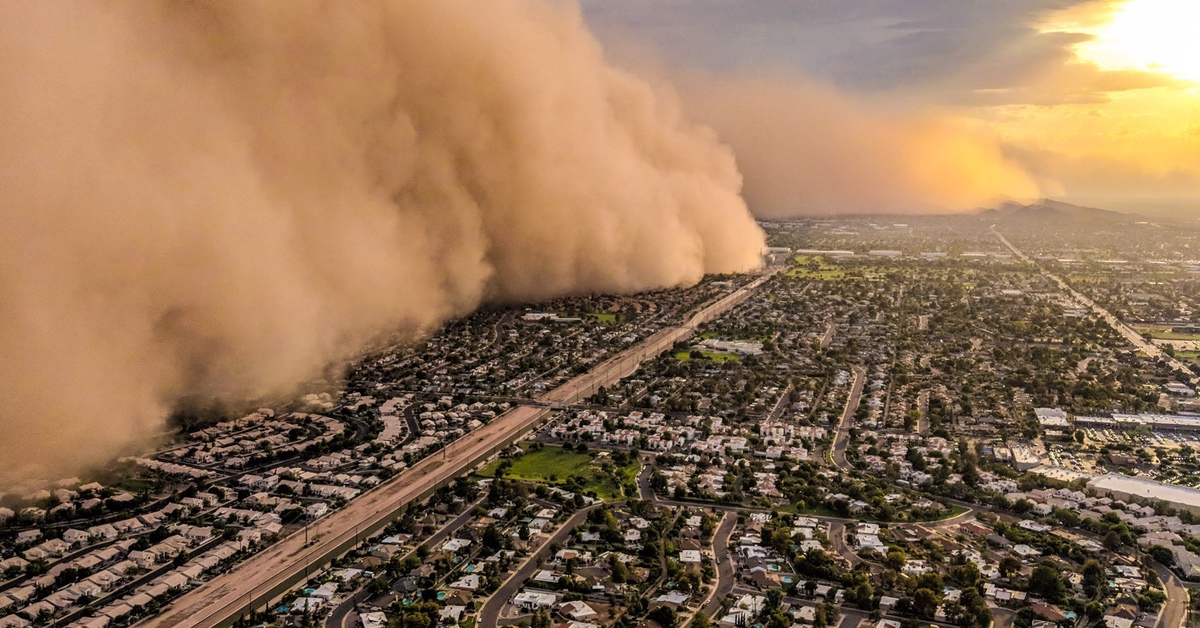 The lightning from these desert storms can be spectacular, particularly against the backdrop of the mountains and deserts. That’s why every year, Weather Holidays, part of Netweather, run a 10 day Arizona lightning tour, different from the Tornado Alley Tours, where guests stay at a single base near to Phoenix to be in ‘prime position to catch some of the most incredible lightning displays on earth, with a lot less travelling than our tornado tours.’ 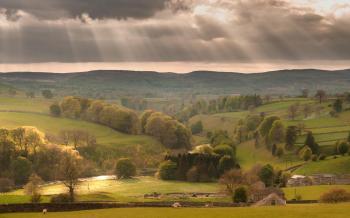