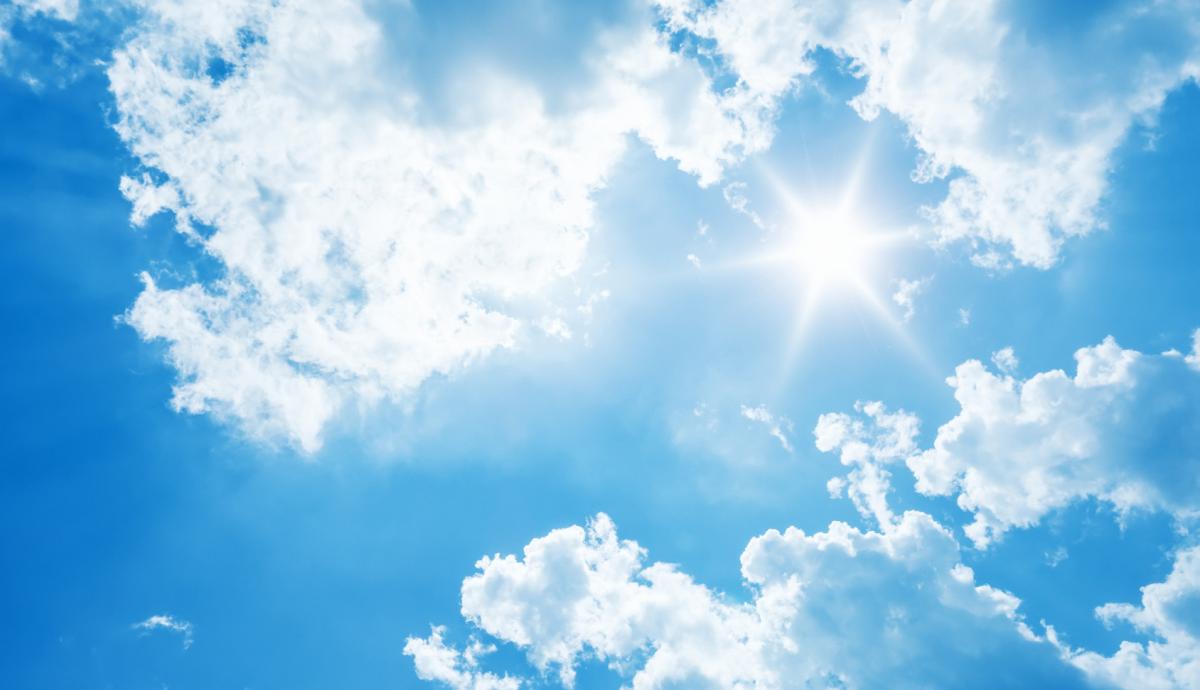 Although sun-bathing is probably the last thing on many peoples’ minds at the moment, given the rather cool, gloomy and, in places, damp weather these last few days, the sun will no doubt make an appearance over the coming weeks, so those outdoors, whether deliberately soaking up the sun or not, it may surprise some that the sun's UV rays rather than the sun's heat causes the skin to burn or tan. But it doesn't have to be sunny for UV rays to damage the skin either, you can burn at this time of year even when it's overcast.

It's not the sun's heat that causes sunburn

But it never ceases to amaze me that I still often overhear or see people mention that they were out in the sun and got sunburnt or tanned quickly ‘because it was hot’, the recent heatwave obviously manifested in a plethora of such comments. While on the same hand I have also heard or seen a few comments of surprise from someone whom had caught the sun despite temperatures being in the low twenties. I guess it can be difficult to not to associate heat from the sun causing sunburn, because when it is hot it does feel like the sun is burning the skin, however, this heat is the Infrared radiation from the sun, which does not cause sunburn.

The myth of windburn (it's actually sunburn on a windy day)

I’ve often heard too over the years from various people, even my own relatives, say that I or their skin had got colour or burnt because of the wind, even if it was a cool or cloudy. But does the wind really accelerate burning or tanning of skin? I think not. There is even a condition mentioned in Wikipedia and various ‘health and well-being’ websites called ‘windburn’ – whereby sunburn develops even on a cool or cloudy day but is attributed to the wind. Unfortunately, this is a popular and widely held misconception, because peoples’ skin can still be vulnerable to the burning effects of the sun’s radiation even on a cloudy or cool day.

So, what really causes sunburn?

It may come as surprise to some, probably through innocent enough ignorance and lack of education on the subject, that it’s not the sun’s heat that’s causing the skin to burn, but in actual fact it is excessive exposure to ultraviolet (UV) light radiated from the sun that does the damage. There are 3 types of UV light, UVA, UVB and UVC: 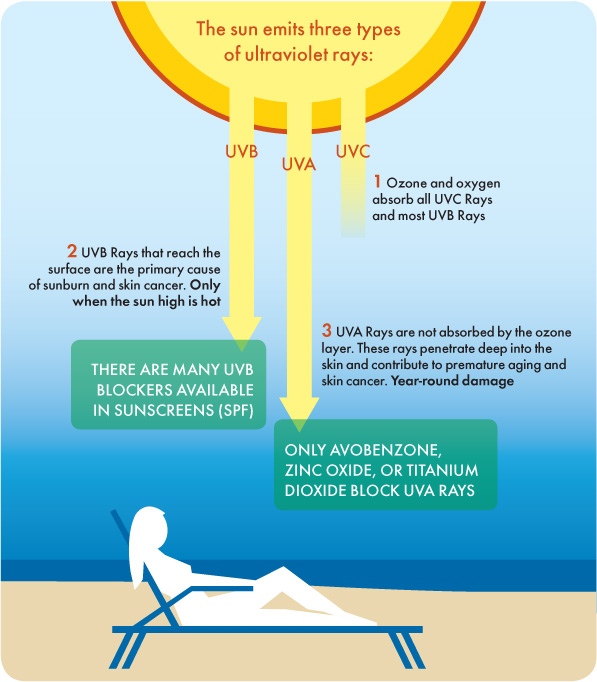 It may come as no surprise that the sun is a source of light and heat. The sun emits a spectrum of radiation received on earth which includes: infrared, visible and ultraviolet. The light spectrum from the sun ranges from violet at one end to red at the other end, like the colours of a rainbow. Overexposure of skin to UV radiation can cause harm to humans. At the opposite end of the spectrum is infrared, which creates warmth. It is important to understand this difference, because many think of heat and UV radiation as the same thing. Because whilst the heat from infrared radiation can be felt on the skin, UV radiation is invisible and cannot be felt during exposure.

Solar spectrum, UV light (that causes sunburn) at other end of spectrum to infrared that creates heat from the sun 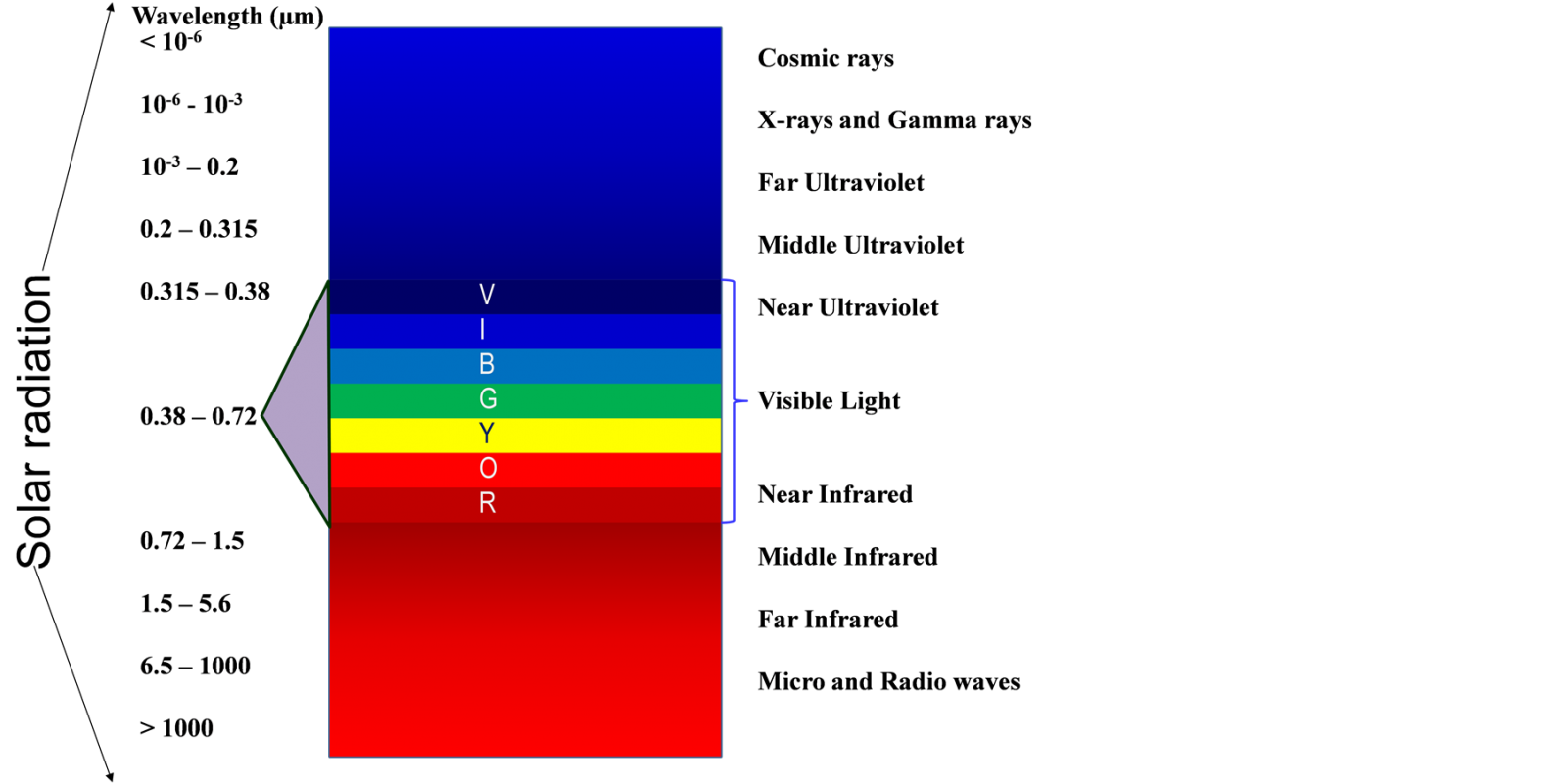 When the skin is exposed to UV radiation from the sun, it accelerates the production of a skin pigment called melanin – which gives someone’s skin it’s natural colour. When the skin is exposed to strong UV rays, melanin production goes into overdrive and hence the skin tans and turns a darker colour. The tanning of the skin is basically the body’s only defence against the harmful radiation from the sun, in other words, a natural sun block if you like, as melanin absorbs UV light.

However, how much melanin the skin produces to block the sun’s damaging rays can vary from person to person and depends very much on genetics, so some people do not produce enough to protect the skin enough to prevent the skin from receiving sunburn.

UV levels depend on time of year, time of day, conditions and location

UV levels in the UK and much of Europe are usually highest between May and September, peaking in late Spring and early Summer – when the sun is sun is highest altitude in the sky and thus when it is at its strongest. However, the UV index – which indicates how quickly one can get sunburnt, can vary at a given time and location throughout the year depending which part of the world you are in, conditions and the time of year. The contributing factors to amount UV exposure one may receive maybe summarised as follows:

So, in conclusion, it’s not the sun’s heat the causes sunburn, but it is the UV radiation – which is not dependent on temperature or even whether it’s sunny. Cooler and cloudy days, does not mean less UV levels either. So, between May and September, if you are outdoors, it is advisable to wear sun screen, particularly children, whose skin is much more sensitive than adults, even if it is overcast. Cool and sunny days you will burn just as quickly as hot and sunny days from late Spring to early Autumn. A strong wind does not increase the burning of skin either, rather the cooling effect of wind on the skin may mask the feel of skin burning with exposure to the sun.