Tropical Storm Koppu Brings Over 1 Metre Of Rainfall To Philippines

Koppu (24W), known locally as ‘Lando’ in the Philippines, was downgraded from a Typhoon to a Severe Tropical Storm on Monday and will continue to weaken during the rest of the week. But its slow movement near the northwest coast of the Philippines’ northern island of Luzon, has brought over a metre (3 feet of rain) so far, and may continue to bring a risk of dangerous flooding and a risk of deadly mudslides for the rest of the week.

Super Typhoon Koppu last Saturday east of the Philippines with 120 mph winds before it weakened into a tropical storm yesterday. 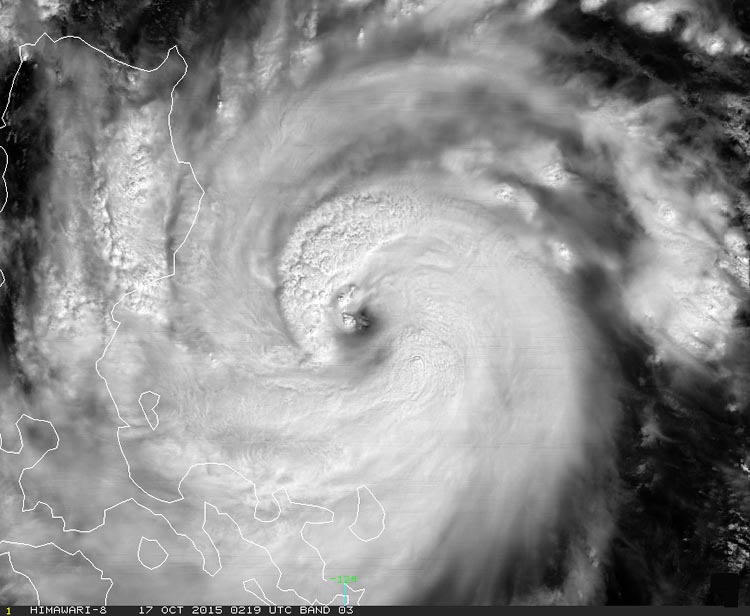 Koppu arrived across the island of Luzon over the weekend, bringing violent winds and torrential rain. Koppu made landfall as a ‘Super Typhoon’ across Luzon’s eastern Aurora Province early Sunday morning local time, with sustained winds estimated at around 150 mph before the Typhoon made landfall, putting it into a Category 4 on the Saffir-Simpson Hurricane Scale. The eastern coastal towns of Casiguran and Baler saw significant building damage and power outages Sunday morning as Koppu made landfall, with winds of 123mph hitting the coast. Koppu has been responsible for at least 12 deaths as of late Monday, with some 65,000 Filippinos being displaced by rising flood waters, following over 3 feet of rain falling towards the NW part of Luzon. The Provinces of Aurora and Nueva Ecija have seen some of the worst flooding, with floodwaters at head height in some of the villages, forcing people on to their rooftops to be rescued.

Winds circulating around Koppu continue to weaken as it moves very slowly (around 5 mph northeastwards) off the northwest coast of Luzon, with maximum sustained winds over water near the centre of 45 knots (51mph) and gusts to 55 knots (63mph). Although the Philippines are no stranger to Typhoons or Tropical Storms, Koppu is the second Typhoon to hit the archipelago this year, the slow-movement of Koppu means that heavy rain will fall for much longer than usual.

The reason for Koppu’s slow movement is mostly down to the tropical storm’s complex interaction with category 2 Typhoon Champi which lies further east over the NW Pacific. Normally, a Typhoon, tropical storm or cyclone crossing the Philippines will move quickly across the archipelago then out over the South China Sea. But a ridge of high pressure over Taiwan and between Koppu and Champi, created by warm air flowing out of these tropical systems has, in effect, been trapping TS Koppu near the Philippines and causing its slow-movement.

The rain bands circulating in such tropical storms can easily produce 2 inches of rain in an hour. But the mountainous terrain of NW Luzon (northern Philippines) creates additional lift of the warm and moist tropical air within the storm to unleash as much as 20 to 40 inches (half a metre to 1 metre) of rainfall. In NW Luzon, 1025.4mm (40.37 inches) of rain have fallen at Baguio as of Tuesday aternoon local time. Though the rain has now eased - as the rain bands become more fragmented and remain offshore. To put this into perspective, a metre of rain is roughly twice as much as London would expect to see in a year! The City of Baguio in the NW of Luzon is particularly prone to these extreme rainfall totals as historical records would suggest. In 1911, an astronomical 2,200mm+ (87inches) of rain fell over 4 days from a tropical cyclone. More recently, 73 inches fell over 7 days in October 2009. 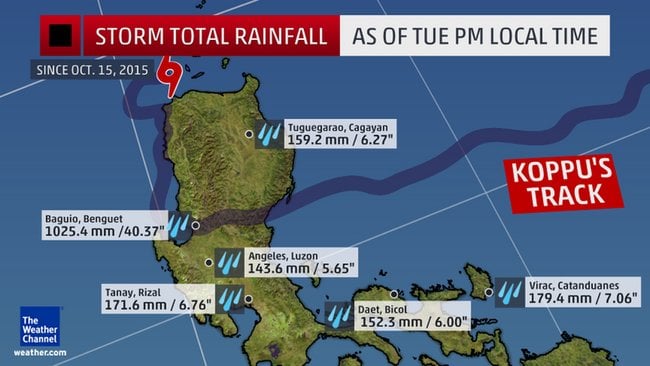 Some computer models were predicting more rainfall to fall over northern Luzon than has actually fallen, probably because Koppu has tracked somewhat further west than models anticipated, Koppu’s close proximity to land, though, has meant that its structure is more ill-defined with convective bands around the tropical storm weakening. There is still model uncertainty over Koppu’s erratic track, though the Japanese Meteorological Agency and U.S. Navy Joint Typhoon Warning Centre (JTWC) predict that it will turn and head northeast to the east of Taiwan and towards the southern Japan’s Ryukyu islands over the coming days. Although Koppu is slowly moving away from the Philippines now, it will still be close enough over the next few days to bring an onshore moist westerly flow which will rise over the north-south mountain range along the NW coast of Luzon, creating ideal conditions for extreme rainfall over the area, increasing the severity of flooding and increasing the risk of landslides. Even if there isn't any further significant rain, like has been seen since Sunday, over the next few days, recent heavy rainfall over the mountains still takes a few days to work down through water courses onto the flood plains, so the risk of increased flooding remains.

Tropical Storm Koppu is now fragmenting and weakening off the NW coast of the Philippines island of Luzon (image courtesy of Weather Underground): 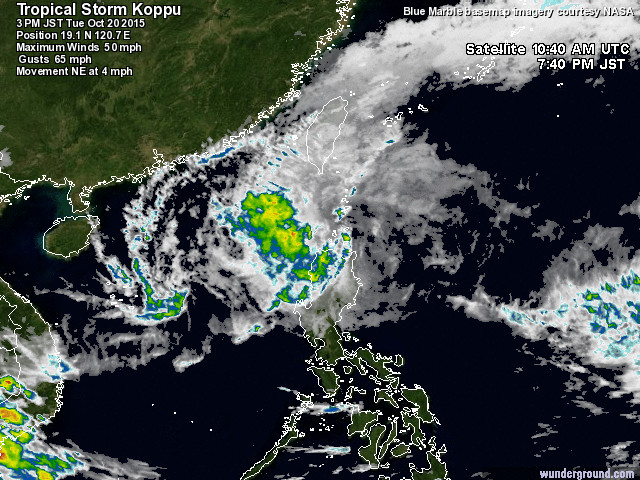 Further east, Typhoon (25W) Champi, which attained Super Typhoon status (150 mph) for a time on Sunday, has weakened over the last few days, and is now category 2 on the Saffir-Simpson Scale (96-110mph winds). Champi will drift north before curving NE from Thursday, passing close to the Pacific island of Iwo Jima on Thursday local time, where they will be preparing for damaging winds, heavy rainfall and storm surge flooding.