The new working week sees a rather autumnal run of weather ( i.e. cool, wet and windy) coming up across the UK, with one low pressure system arriving from the southwest and tracking slowly across southern UK on Monday, before another, more troublesome looking low, deepens into a vigorous looking depression on some weather models off NW Spain on Tuesday before swinging northeast towards the UK for Wednesday. This second, potentially deep low, fuelled by the remnants of ex-tropical depression Henri crossing the Atlantic interacts with a powerful jet stream, upper trough coming down from Greenland and a sharp temperature contrast between polar air and tropical air either side of it.

Sunday night sees an area of low pressure to the SW track slowly NE towards the Bristol Channel, with locally heavy showery rain across the SW spreading north ahead of the low across many parts of England and Wales, with an increasing risk of thunder across southern most counties of England, as an unstable returning Polar maritime airmass (rPm) follows the occluded front pushing showery rain north. Turning drier across Scotland and N. Ireland.

The low in the SW only slowly tracks NE across central England on Monday, before exiting somewhere over eastern England on Tuesday morning. Showers or longer spells of rain will circulate around this low across much of England and Wales for much of the day on Monday, with a risk of heavy rain or thunderstorms locally from the Midlands and Wales southwards spreading NE during the day, as a pool of unstable rPm air wraps around the southern side of the low. Gales look to develop intially across SW England and south Wales from early afternoon before transferring across southern England in the evening, with gusts of 40-50mph possible inland, maybe 55-65 mph along exposed southern coasts. A drier, brighter and less windy picture for Scotland and Northern Ireland. 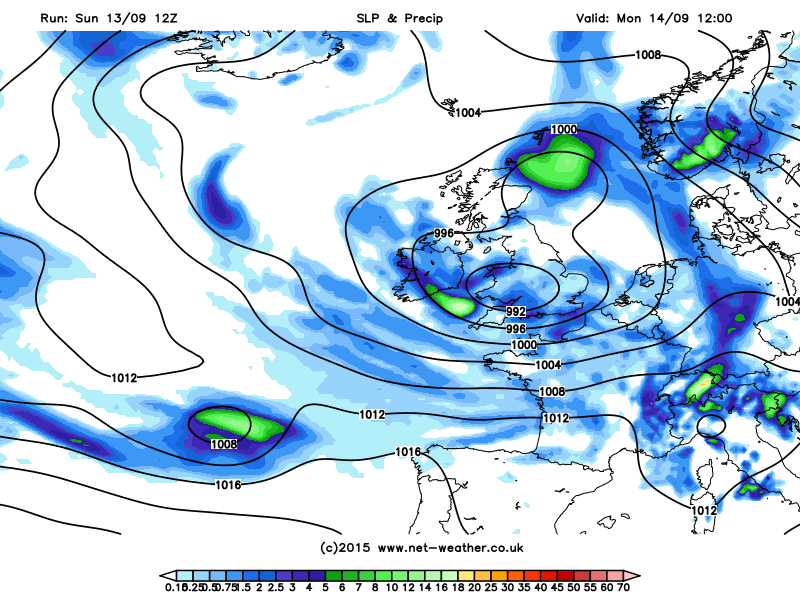 The low then moves out into the North Sea by early Tuesday afternoon, taking any longer spells of rain over England with it to leave a brighter but still showery afternoon across England and Wales. Another low moving NW over the far north of Scotland bringing a threat of rain here.

Then models show a deeper low move northeast from the Bay of Biscay towards southern England for Wednesday. The low, which contains remnants of tropical depression Henri, is indicated by GFS and ECMWF to start undergoing rapid deepening Tuesday morning over the Atlantic north of the Azores archipelago. This happens as the low moves under the developmental left exit of a 150mph jet streak racing across the Atlantic and, just importantly with regards to deepening it, engages with a sharpening shortwave trough dropping SE from southern Greenland, which serves to further steepen the thermal gradient and aids forced ascent of air ahead of it helping to further deepen the low. 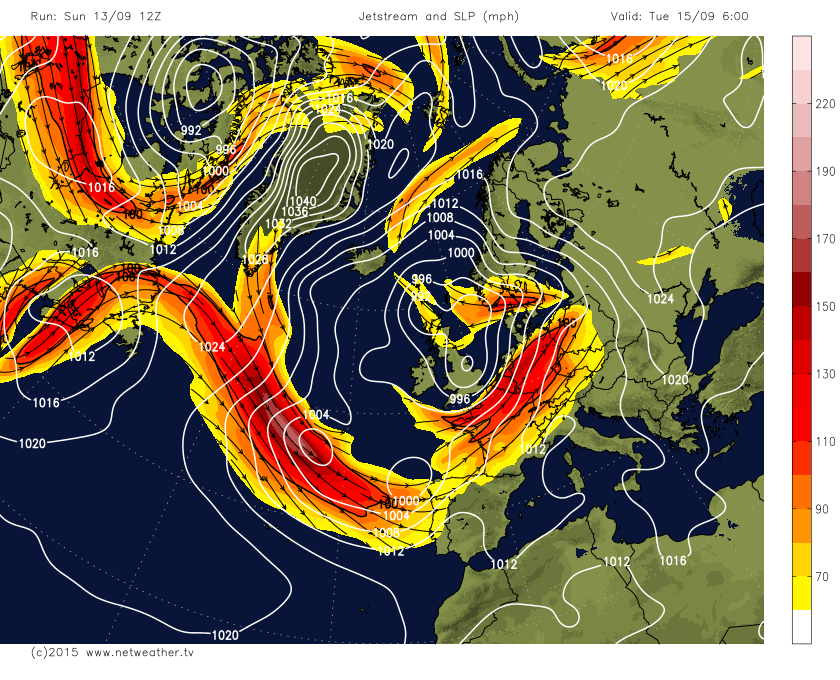 Some uncertainty over the depth, exact track and timing as would be expected this far off and particularly with deepening lows arriving from this direction. A look at GFS and ECM ensembles suggest some members going for the possibility of the low tracking NE over N France missing the UK all together. But it looks like it will turn wet and windy from the south across England and Wales during the day. Gales developing across the south, but again, some uncertainty over wind strength, with 12z GFS shallower than ECMWF and only giving gusts of 40-50mph max along coasts, whilst 12z ECMWF's low perhaps producing severe gales around coasts.

12z ECMWF, though not as deep as 00z, was still deeper than GFS again: 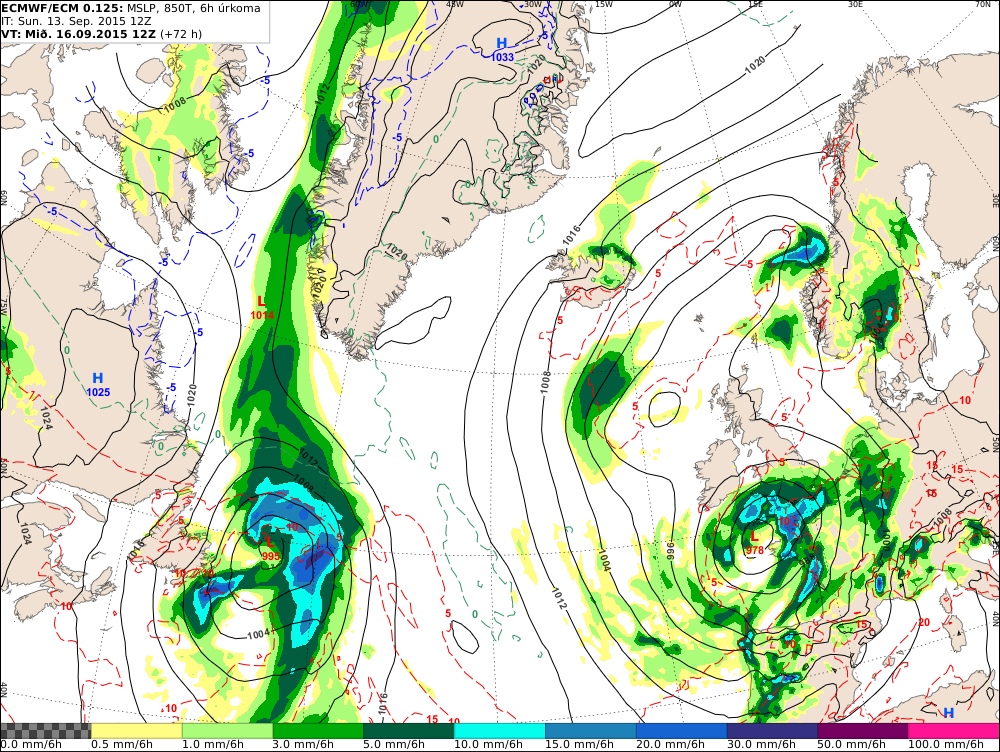 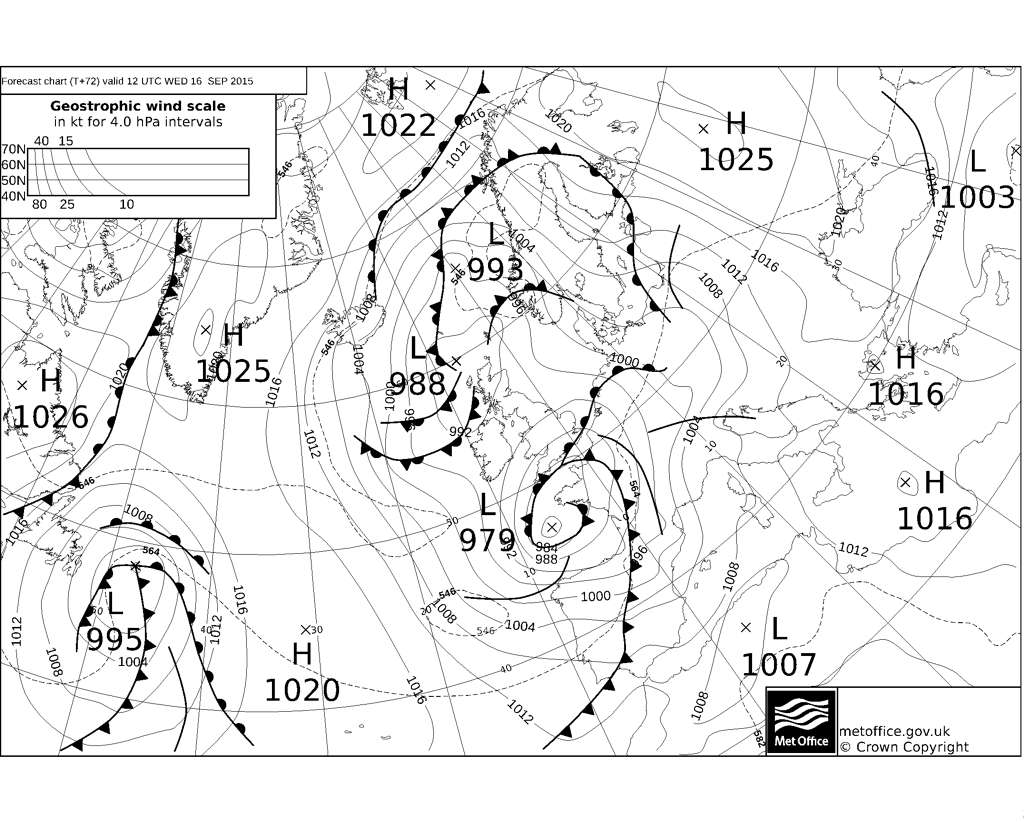 Warm moist air of sub-tropical origin being drawn way from the southwest wrapping up into this system clashing with rapid cooling aloft as upper trough arriving from the NW engages the low as it deepens - which will likely produce some large rainfall totals in places, with GFS indicating 40-60mm 24hr rainfall totals  from this low in places across England and Wales, ECMWF similar. Some convective/thunderstorm activity on the southeast side of the low likely to enhance rainfall too - particularly across far S/SE UK and Nern France. Strong upper winds with winds backing towards the surface ahead of the low moving would indicate any thunderstorms have potential to produce severe weather (i.e. damaging convective gusts and even tornadoes) too. So there is a potential for flooding and also wind damage to trees with disruption to transport.

A cool, showery and windy northwesterly flow follows this deep low clearing into the North Sea later on Thursday and for Friday, but both GFS and ECMWF indicate a ridge of high pressure building in for the weekend, bringing a return to more peaceful and dry conditions for most.