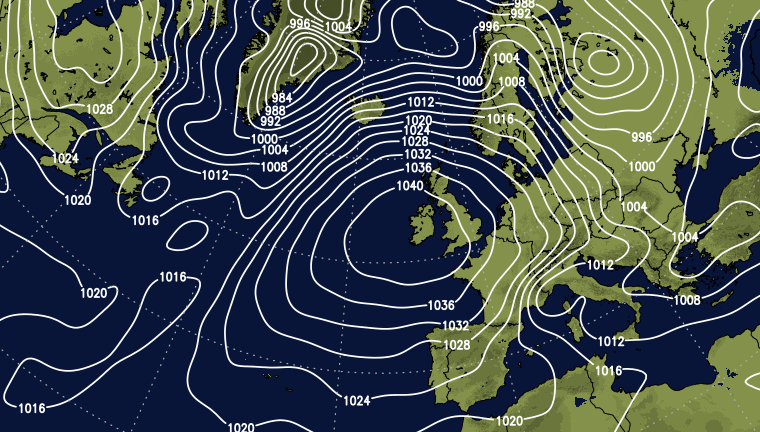 High Pressure Is The Boss

High pressure is now well and truly in charge of our weather, so little changing throughout much of the upcoming week with varying amounts of cloud and some sunny spells by day, along with some patches of frost and fog by night.

Last night, with clearing skies in many parts we have seen temperatures dipping away to below freezing, and some fairly extensive mist and fog patches have formed, but they will, in the main clear through the morning. The broken cloud yesterday evening also had a bonus effect of delivering a spectacular sunset for parts of the country, this one tweeted to us by Rob Woods is a stunner.

Temperatures today will typically range from 5-8c across England, Wales and Northern Ireland, a degree or so cooler for Scotland though. It's also in Scotland, especially the northwestern half of the country where cloud is likely to be thickest, with some drizzly bits and pieces of rain also likely. Tonight then brings a fair bit of cloud, but any clearer patches will mean frost and fog forms quite readily.

Monday keeps the theme going, so expect a fair bit of cloud but with some sunny spells breaking through - especially to the east of higher ground. Tuesday, Wednesday and Thursday see little change, although increasingly cloudy by this point with some drizzly bits of rain possible - especially in the west.

As we head into the latter part of the week we still have high pressure running the show, but it may well just allow the odd weather front to creep around the top of it and bring some rain into the far north and particularly northwest at times. All in all though, it's a benign and quiet spell of weather during the coming days, less cold than of late as well.