Calming Down Today, But More Stormy, Wet Weather Ahead

Yesterday bought yet another significant Atlantic storm to the British Isles, Wales topped the charts in terms of both rain totals and wind speeds with Mumbles Head seeing a gust of 80mph and Libanus seeing 47mm of rain. Much of the country saw gales or severe gales along with 20-40mm of rain, fortunately the winds are easing back today, although there are still some heavy showers about.

Those showers will be heaviest and most frequent in the west and south of the country, blustery, thundery with hail in the mix at times too, and becoming wintry up over the hills also. They will tend to ease off a touch during this afternoon though, so a few more sunny spells poking through from time to time. Temperatures on the thermometer will range from 4-8c typically, but it'll certainly feel colder than that in the wind and as the showers pass through.

Overnight, some of the showers do keep going, so Monday starts with showers affecting the west, south and southeast of the country in particular but through the day these should die back to leave much of the country to end the day on a dry note. Unfortunately though cloud will already be building from the west with rain reaching the west of Ireland by midnight, that will zip east quite speedily through the night making for a wet start to Tuesday for the west of Britain with all that transferring further east during the day and clearing the east coast by late afternoon or early evening. With relatively cold air in the mix too, some of that rain will fall as sleet and snow - especially up over the hills from Midlands and Wales northward - but some sleet or wet snow is possible lower down. Following in behind from the west will be some sharp, wintry showers too. Winds will be blustery through the day too - strongest in the west during the early hours with gales close to coasts which may transfer to the northwest later.

As we head into midweek and beyond, there's some uncertainty over the details but the overall pattern is the same as ever with more very wet and windy weather at times with low pressure well in charge - the chart below which is for Wednesday shows 4 low pressure areas in the vicinity!

Wednesday itself is likely to start with plenty of blustery and in places wintry showers, but more persistent, heavy rain is expected to run up from the southwest later in the day (perhaps falling as sleet and snow as it moves north into northern England), accompanied by severe gales close to coasts.

Beyond that a brief but still showery respite is likely but more heavy rain and high winds are on the cards as we head into the end of the week.. 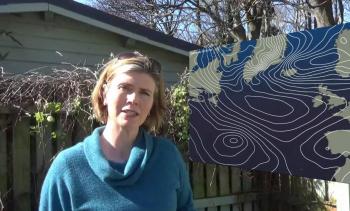