The hot weather continues into the weekend, but from Sunday onwards, there's also going to be the threat of torrential downpours and thunderstorms.

What a period of weather we're having. 40c has been broken for the first time already this summer, and now we're in the midst of a further spell of extreme heat, a drought has been declared for parts of England, then later this weekend and into the start of next week, there's the threat of thunderstorms.

On top of that, with the very dry conditions across virtually the whole country, the storms will bring an increased risk of flash-flooding due to additional surface water run-off, as a lot of the ground will be too hard to absorb any or much of the rain which falls.

Starting with the heat, the next few days will continue to see temperatures well into the thirties celsius across a good part of England and Wales. Southern Scotland may also get up to 30-31c tomorrow (Saturday) and Sunday. For some relief from the heat, coastal areas will be a touch cooler at times, with onshore sea breezes, and the far north of Scotland will see maxes reach the high-teens or low-twenties.

Saturday is likely to see the peak of the heat, with highs of 35-36c in southern and central regions. It'll not be a great deal cooler on Sunday, though, and an amber weather warning is still in place for extreme heat, up to the end of the weekend. 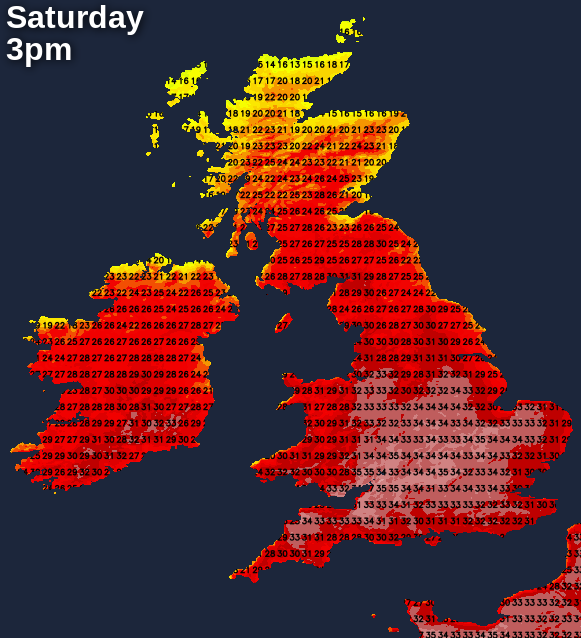 Then we come to the thunderstorms. The risk will start on Sunday across Northern Ireland and Scotland initially, but with a few downpours and storms possible in western parts of England and Wales later in the day.

The threat then becomes more widespread on Monday, with a renewed push of thundery rain likely on Tuesday. As ever with storms, they'll be hit and miss, with not all parts liable to catch one, but should one move through, there is going to be the possibility of it being quite spicy with torrential rain, gusting winds and frequent lightning possible.

With the ground being so dry, run-off is going to be a factor with the ground unable to soak in much, if any, of the rain which falls. So, flash-flooding may well be a real issue. This experiment by Dr Rob Thompson, a meteorologist at the University of Reading, illustrates the issue really well.