It’s been showery and temperatures not really warm enough for the beach for many over the past week, thanks to a dip or trough in the jet stream sat over the UK keeping low pressure trapped nearby. However, through the coming week, the jet stream, which has been pushed just south of UK recently, will shift north of the UK – allowing the Azores High to build in from the southwest by the end of the week and through next weekend. This means it will become drier and more settled for central, southern and eastern areas through the week, while temperatures will also be on the rise, with southern areas of England reaching 27-28C by the end of the week. However, northwestern areas will remain cooler, cloudier and more changeable for much of the week, with showers or longer spells of rain at times, these showers occasionally making it southeast to other areas, but southern and eastern areas staying mostly dry throughout the week.

For now, most places starting Sunday dry and sunny, but there are already a few well-scattered showers around across northern and western areas, heavy and frequent across western Scotland. Cloud will build through the morning and into the afternoon, with showers becoming more widespread by early afternoon, a few sharp showers, before showers ease and turning drier and sunnier in the west, showers becoming confined to the east through the afternoon. Cloudier with showers organising into longer spells of rain across northern and western Scotland through the afternoon and evening. 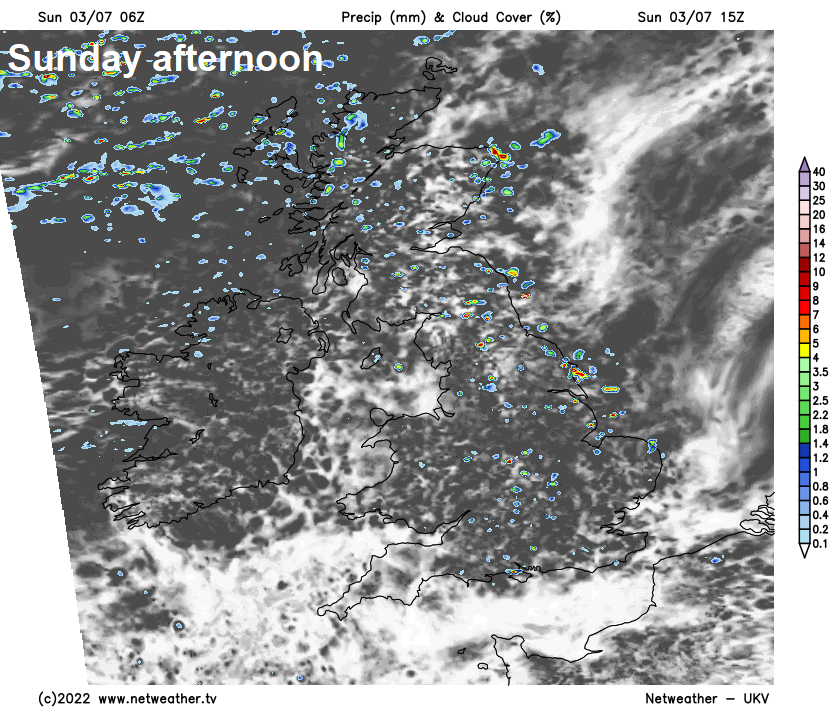 Chance of a shower for the cricket at Edgbaston, the F1 at Silverstone early afternoon, perhaps passing close to Wimbledon later in the afternoon. But any showers should be brief. Temperatures reaching 16-19C generally across northern and western areas, 19-22C across central, southern and eastern areas.

Rather cloudy for many on Tuesday, thick enough to produce some light showers in the west, though some heavier ones possible for western Scotland, but it will be drier than Monday. Best chance of sunshine towards the southeast. Temperatures reaching 15-19C in the north and west, 19-22C in the south and east.

A weakening front moving southeast will push cloudy skies and some increasingly patchy and light rain southeast across many parts on Wednesday, though not much rain reaching southern England. Rather cloudy again for northern and western areas on Thursday, with a few light showers, drier and sunnier towards the southeast – with temperatures reaching the low to mid-twenties here. 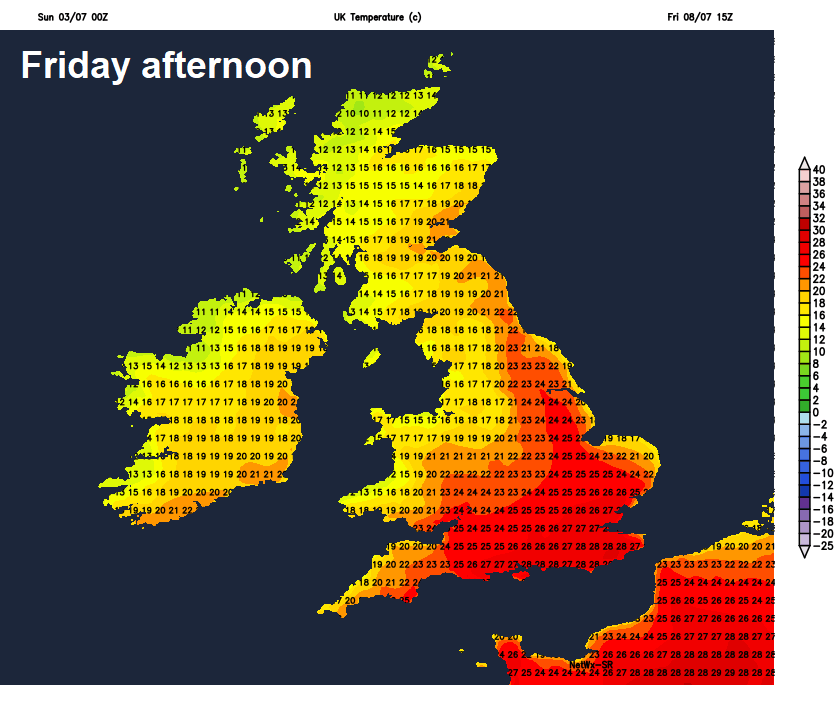 A more widely improving picture on Friday, as high pressure from the Azores builds in more strongly, more particularly across the south, so it will generally be drier with more in the way of sunshine, particularly in the south. Temperatures on the up too, reaching the low twenties in the north and west, perhaps 26-28C across southern and eastern England.

High pressure building in across the UK next weekend, so many places becoming dry, settled, sunny and very warm, perhaps locally hot with temperatures in the high twenties in the south. The exception maybe northern Scotland – which may see cloudier skies and some rain.