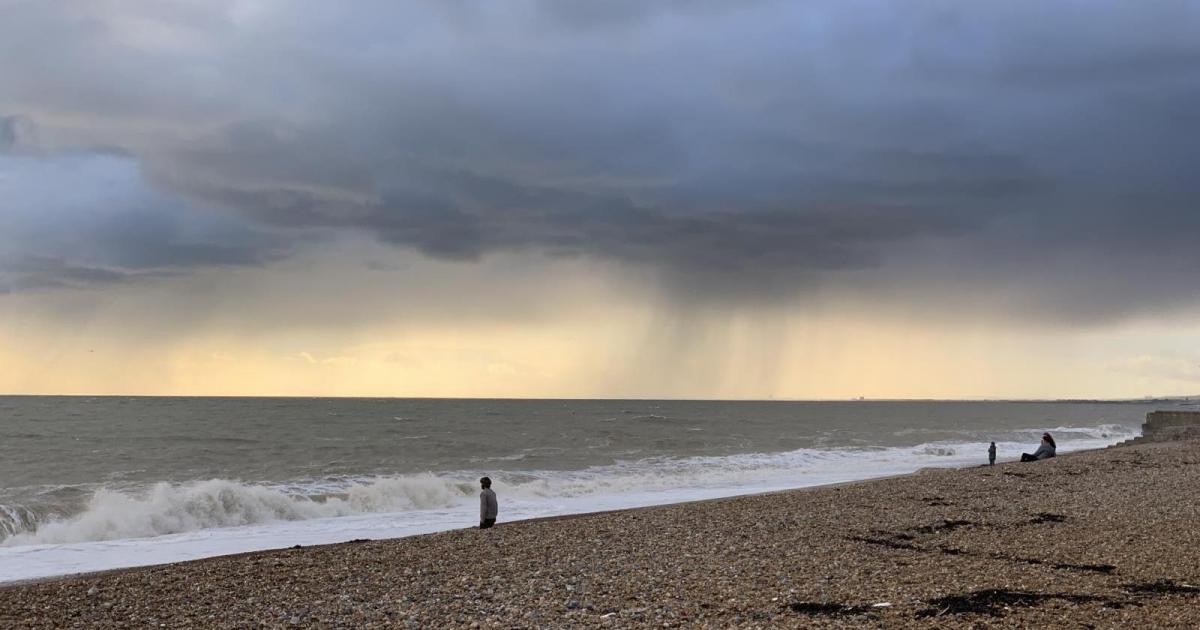 Changeable this week, with low pressure close to the west

After a very warm, locally hot and humid week last week, the weather has turned noticeably cooler and fresher over the weekend, as low pressure moving in close to the west feeds in air off the Atlantic along with showers across more western areas. 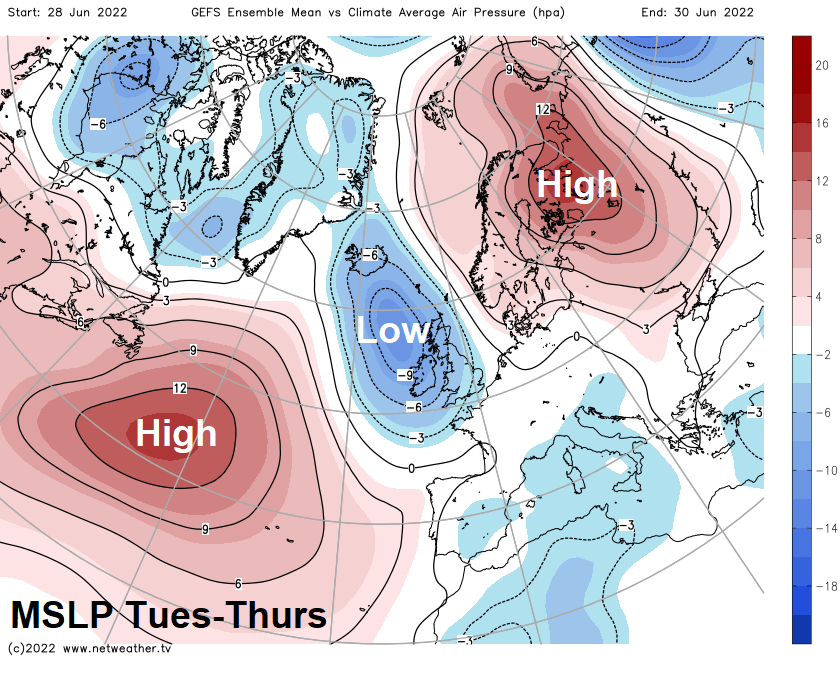 As we start the new working week, low pressure remains close to the west, bringing changeable conditions with a risk of showers passing through but also spells of dry and sunny weather. Areas of low pressure will try in move in off the Atlantic through the week – but will tend to be deflected north as they reach the UK, thanks to a large blocking anticyclone over Scandinavia. So much of this week’s rain, generally in the form of showers, but occasionally with longer spells of rain, will be across northern and western areas, with central, southern and eastern England staying mostly dry – though even here will occasionally be a few showers moving through, like today. 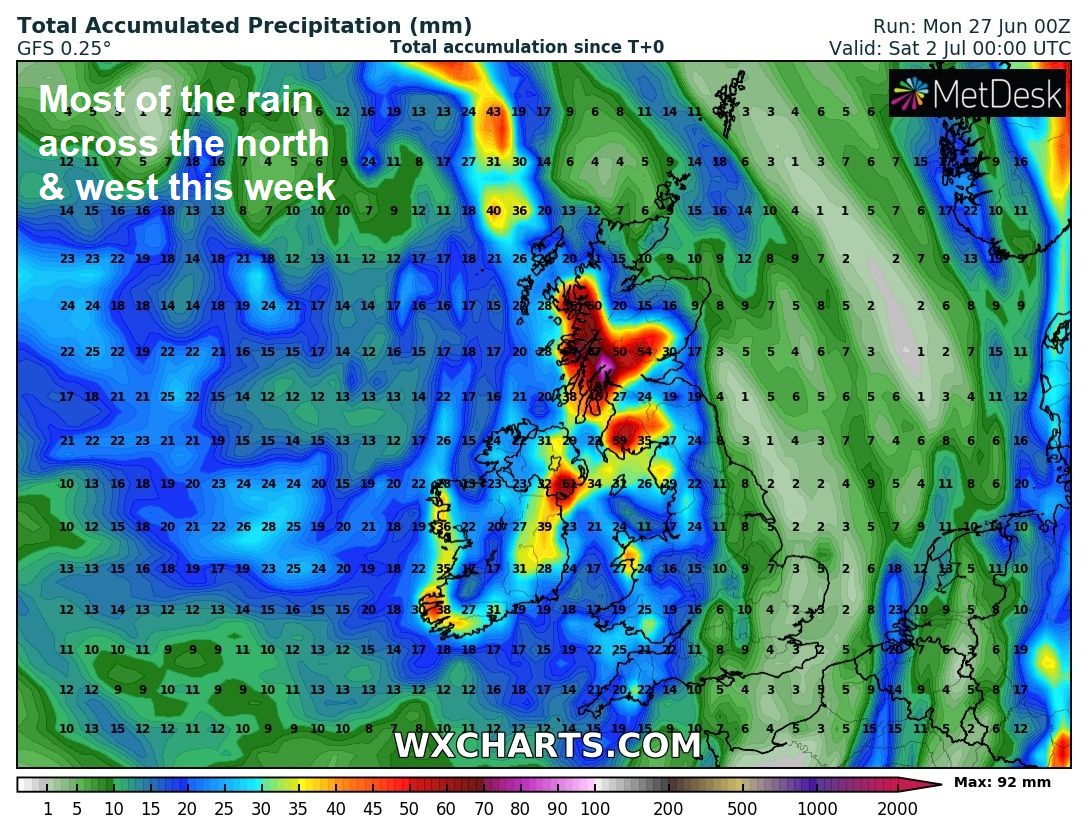 For now, a band of showery rain along a frontal system, currently lying from central southern England up through the Midlands, northern England into SE Scotland – will shift eastwards through the rest of the morning, reaching eastern England through early afternoon. The band of showery rain will turn increasingly convective as it moves east across England, with a risk thunder in the heavier bursts. So, Wimbledon may catch a heavy shower during the afternoon before they clear away east by early evening. Showers becoming more widespread through the day across Scotland once early rain clears the southeast, locally heavy with thunder in the east. NW England, Wales and SW England mostly dry with sunny spells, though a few light showers can’t be ruled out. Sunny spells and a few scattered showers for Ireland and N. Ireland today, before thicker cloud and rain moves in across the west by this evening.

A band of showery rain, locally heavy, accompanied by strengthening winds, will spread east across Ireland and N. Ireland this evening, before reaching western Scotland through the early hours. Elsewhere, thickening cloud from the west will bring some patchy drizzle or light rain to eastern Scotland, Cumbria and west Wales, otherwise a generally dry night with patchy cloud and clear spells. Temperatures falling to around 9-12C.

An area of low pressure will swing northeast close to the west of Ireland on Tuesday, bringing strong winds across the west and bringing a band of showery rain along a frontal system slowly eastwards across Scotland, NW England, Wales and SW England through the day. Early rain across N. Ireland will clear to join Ireland to sunshine and showers, while central, southern and eastern England will have a mostly dry day with sunny spells, though cloud increasing towards the west later. Windy across the west, gusts of 40-50mph possible around coasts and over hills, which combined with the cloud and rain will mean highs of only 16-19C here. Breezy across eastern areas too, but warmer in the sunshine here, temperatures reaching 20-24C.

Cloudier and cooler on Wednesday across more areas, with showers across many areas, locally heavy and thundery in the north and west, but some sunny spells possible too – best chance of sunshine and staying dry will be towards the southeast. Temperatures reaching 18-21C. Risk of thundery showers clipping SE England and East Anglia later in the evening / overnight, but some uncertainty over this.

Perhaps some thundery rain clearing north and northwest across NE England and parts of Scotland through Thursday morning, otherwise a day of sunshine and scattered heavy showers – slow-moving across the north, though SE England and East Anglia may stay dry and sunny. Friday seeing sunshine and showers again, though showers perhaps fewer and generally lighter. Temperatures a few degrees warmer than Thursday.