Fresher this weekend, but with thundery showers for northern and western areas

After a very warm and muggy week, with temperatures reaching the high twenties Celsius across parts of England and Wales and some warm sticky nights, the weekend will offer more comfortable cooler and fresher conditions across all parts, as an area of low pressure moves in over Ireland - pulling in Atlantic air. But it will be windier across all parts through the weekend, especially around coasts, with showers across the west, heavy and thundery in places. So the Glastonbury Festival has a good chance of catching some showers today and tomorrow. Eastern areas of England will escape with just a few light showers and it will be mostly fine, dry and sunny here. Temperatures down on what they have been, reaching the high teens or low twenties at best. 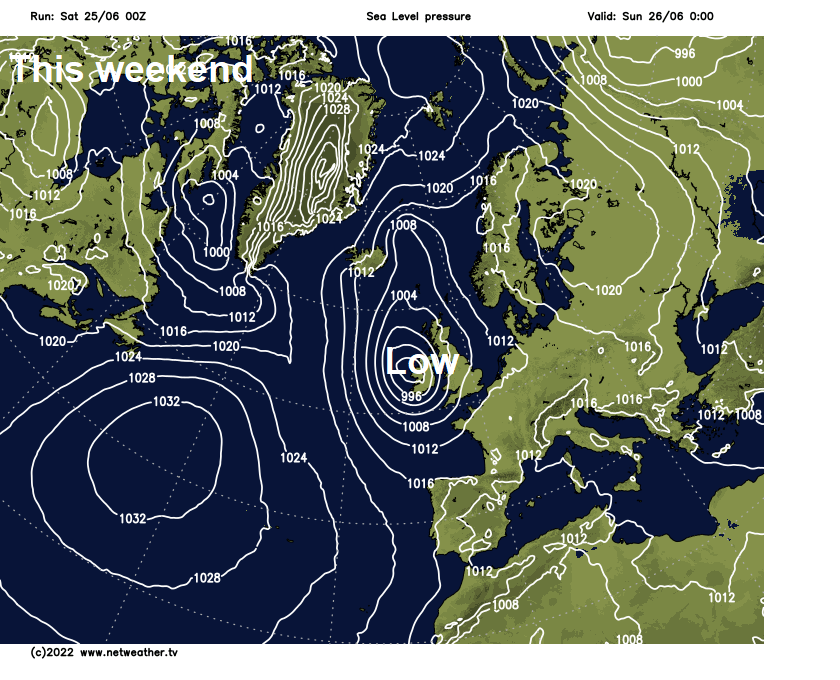 Low pressure will be our companion through much of next week too, bringing windy conditions at times with showers for many most days. Sunshine and showers for most on Monday, longer spells of rain moving in across the north and west on Tuesday, drier, sunnier and warmer in the east. Low pressure moving east across the south towards the near continent from mid-week, so the threat of showers or longer spells of rain increasing across southern and eastern areas towards the end of the week too.  Showers easing towards the northwest later in the week.

For now, a cooler and fresher feel this morning ahead of a breezy and showery day in store for many – especially for the west. Showers from the word go this morning across SW England, Wales, Cumbria, southern Uplands and Highlands of Scotland. Drier and sunnier across central and eastern areas of England and eastern Scotland. Showers will continue across many northern and western areas through the day, becoming heavier with some thunderstorms developing, as the sun warms the ground and builds cumulonimbus clouds. A risk of hail and strong wind gusts with any storms. A more organised area of rain moving in across western Ireland this morning perhaps pushing in across N. Ireland later, otherwise showers here too. Eastern and southeastern England staying mostly dry with sunny spells, though cloud will build, like yesterday, to produce the odd light shower in places. 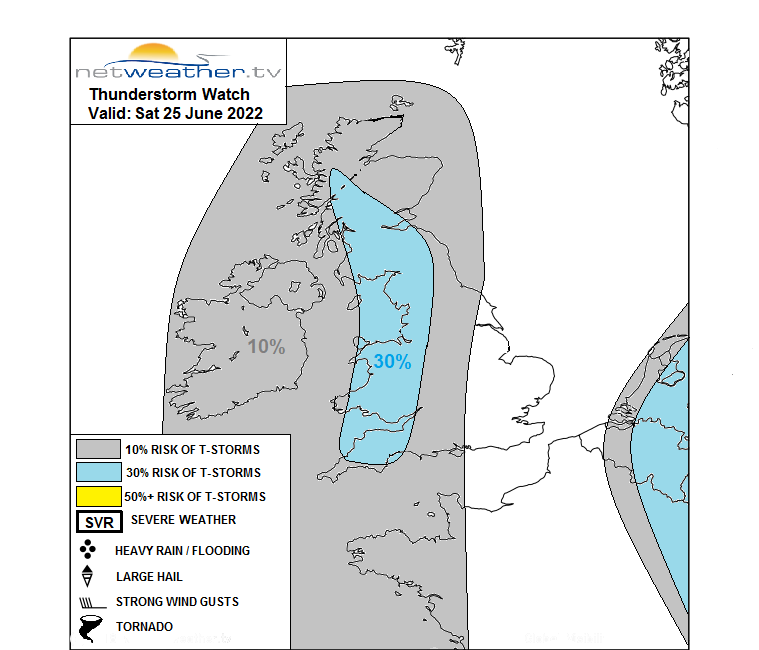 It will be quite a windy day thanks to a fairly deep low close to Ireland, especially in the west and around coasts elsewhere, southerly gales possible through the Irish Sea. Feeling cool in the west as a result, with temperatures here reaching 16-18C at best. Further east a warmer 18-22C, highest temperatures for eastern England.

Showers or longer spells of rain, locally heavy, will continue to spiral around low pressure centred over Ireland across Ireland and the far west of mainland Britain overnight – where it will remain windy too. But elsewhere any showers should fade to leave a mostly dry night with clear spells, feeling more comfortable with lower temperatures than recent nights.

Windy with outbreaks of rain, locally heavy, pushing in across western areas through Sunday morning, the rain turning more showery through the afternoon, showers turning heavy with a risk of thunderstorms too – more especially across N. Ireland and SW Scotland. NE Scotland, eastern and southeastern England staying mostly dry and breezy with sunny spells again, though the odd light shower can’t be ruled out. Cool in the north and west, temperatures reaching 15-18C, warmer towards eastern England – where temperatures will reach 19-23C. 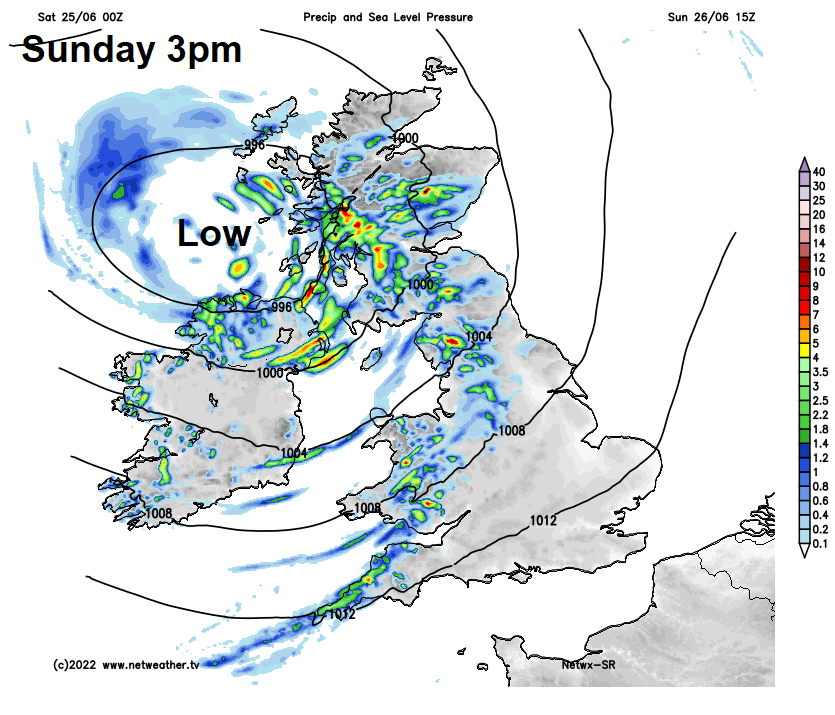 Continuing unsettled and windy across the west early next week. The weekend’s low moves away north but to be replaced by another low pressure system moving in from the west to the west of Ireland on Tuesday. Monday seeing a mixture of sunny spells and showers spreading east across many parts, locally heavy with thunder. Tuesday seeing cloud and spells of more organised rain, locally heavy, pushing in from the west across northern and western areas ahead of low pressure to the west of Ireland. Eastern England mostly dry with sunny spells.

Sunshine and showers on Wednesday, as low pressure moves in over Ireland, most of the showers, perhaps thundery, across northern and western parts. Showery again on Thursday and Friday, locally heavy with thunder, perhaps a more organised area of thundery rain pushing up from the south later on Thursday – which may still affect eastern areas on Friday. Showers easing across the northwest on Friday.