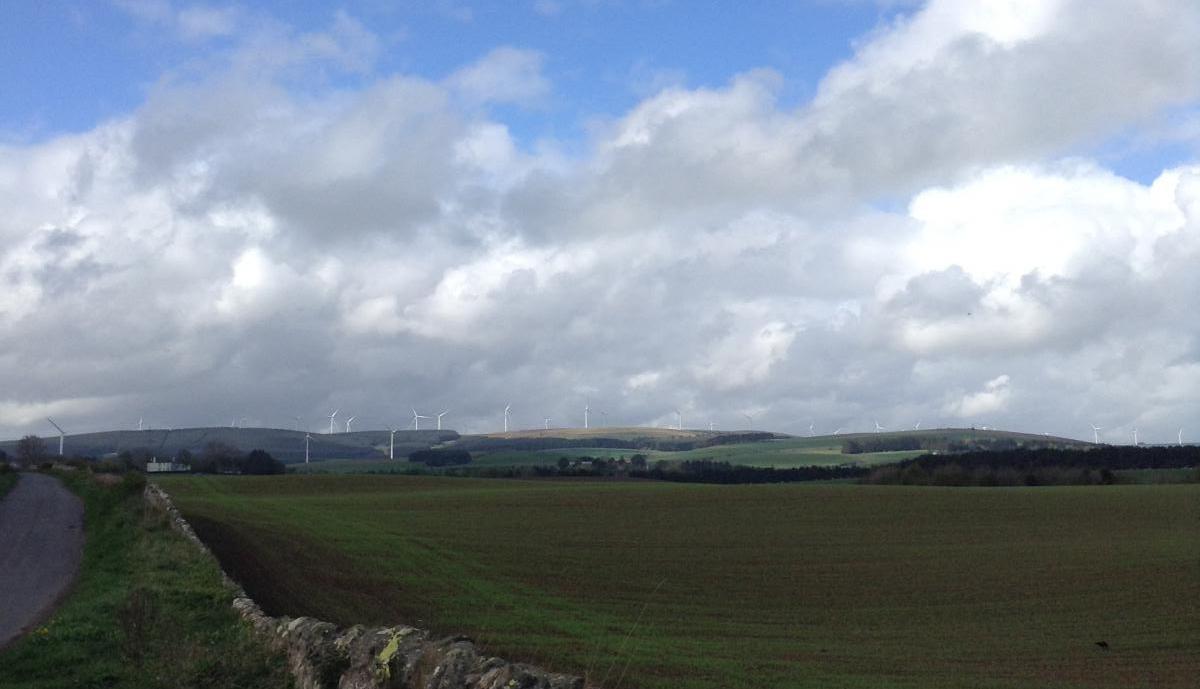 Today will see a north-south split in temperatures, with a frontal system sliding east across central areas, bringing some rain, dividing warm air to the south and cooler air across the north. Temperatures look to reach 21C across SE England, but across Scotland it will reach only 15C at best in blustery westerly wind which will also blow in showers. The cooler northwesterly flow will then feed across all parts on Friday, following a weak cold front clearing the south tonight. High pressure building in across the southwest will bring a mostly dry day for many – but further showers likely in the northwest.

A cool down across all parts over the next few days, particularly cool by Sunday, as winds turn northerly:

High pressure in control close to the northwest to start the weekend, so most will see a dry and sunny Saturday, though a northerly breeze will pick up across eastern areas – making it feel cool towards coasts here. Turning colder on Sunday, as a noticeably cool north to northeasterly wind strengthens, feeding in more in the way of cloud and some showers too – particularly towards more eastern areas.

For now, a sunny morning for SE England, more in the way of cloud further north and west across England, Wales and N. Ireland– with some rain spreading in east across N. Ireland, northern England and north Wales, persistent over western hills, drizzle over hills further south across the west. Cloud and rain across the far south of Scotland but for the rest of the country a brighter but blustery picture – with sunny spells, but also some heavy showers towards the west.

Showers from the word go this morning across western Scotland, more general rain for northern England and north Wales 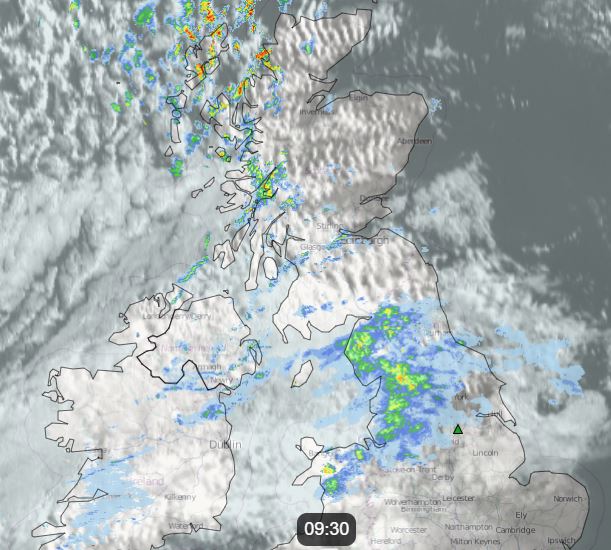 Cloud and increasingly patchy rain will gradually clear southeast from N. Ireland, north Wales and northern England through the afternoon, to join the sunnier conditions already over Scotland, though blustery showers will spread east across Scotland, heavy with hail and thunder in the west. Cloudy skies with patchy light rain or drizzle along a weakening cold front will continue to move southeast across SW England, The Midlands and East Anglia, SE England turning cloudier but staying mostly dry. SE England and East Anglia reaching 20-21C this afternoon, elsewhere across England and Wales reaching 15-18C. 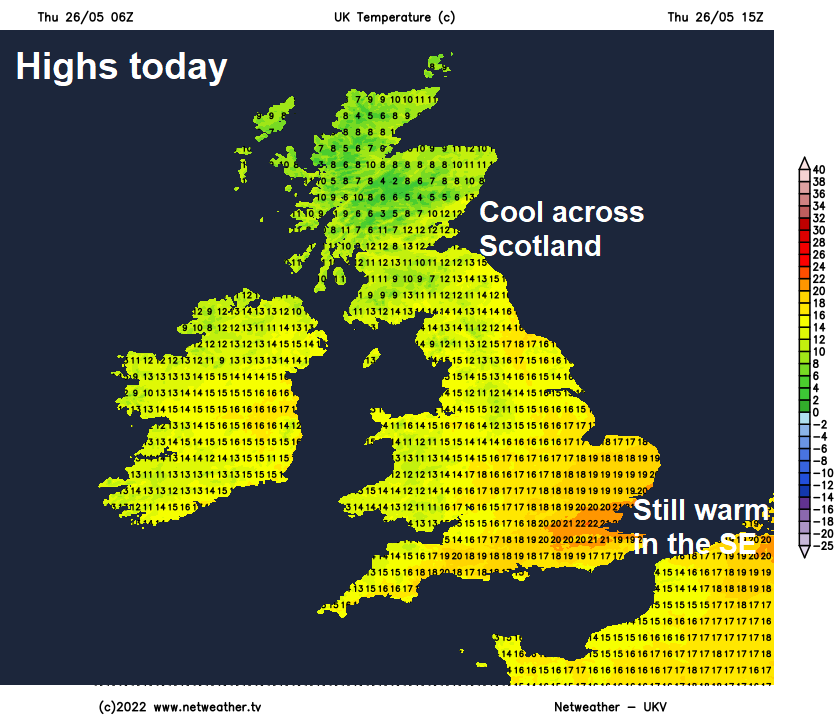 Cold front clears the south coast by midnight, then England and Wales will become dry with clear spells. Patchy cloud and further showers for Scotland, these heaviest and most frequent across the west, with a risk of hail and thunder.

A cool northwesterly flow across all parts for Friday, which will continue to feed in plenty of showers across northern and western Scotland, sunny spells and more isolated showers for the rest of Scotland and N. Ireland. A few showers possible for NW England, otherwise the rest of England and Wales will be mostly dry and sunny, as a ridge of high pressure builds in across the southwest.

After a chilly start a mostly fine and settled Saturday for most, thanks to high pressure close to the northwest, best of the sunshine in the morning with cloud tending to build through the afternoon, but still with sunny spells. Cloud thick enough in the northeast for a few light showers, with a strengthening northerly breeze across northern and eastern Scotland along with eastern England bringing a cooler feel here than in the west. Best of the sunshine and thus highest temperatures across Wales and SW England – where it looks to reach 19-20C, 16-18C elsewhere across England away from eastern coasts which may struggle to reach 13-15C. Southern Scotland and N. Ireland 15-17C, northern Scotland low teens.

After another chilly night, Sunday will see more in the way of cloud with some scattered showers driven south by a brisk northerly or northeasterly wind, strongest towards the east. Showers may turn heavy across eastern England in the afternoon, driest and best chance of sunshine across the far west. A cooler day for all, highest temperatures across the far south and west reaching 14-16C, across northern Scotland and coastal eastern England reaching 11-12C at best.

At the moment, next week is looking like a story of sunshine and showers most days, cool at first, but may warm up through the week as wind fall light.