Showery theme continues, though easing across the south later in week

It’s been quite a wet night across parts of England and Wales, as a frontal system moved east, useful rain for the garden and for farmers though. While today it may be prudent to have a brolly handy, with showers expected to develop. Despite perhaps a promising start for many, dry with sunny spells, low pressure will be close by to the northeast, so the air will be unstable today. The shower clouds will build through the morning, with heavy showers and thunderstorms breaking out, particularly towards eastern areas through this afternoon, though nowhere immune from a shower.

For the rest of the week, it will be an increasingly cool theme, as winds turn northwesterly as high pressure nudges in to the southwest. Wednesday will see a weakening frontal system clear southeast, bringing a band of cloud and rain, though little rain by the time it reaches the southeast. Following will be showers in the northwest. Thursday and Friday cool with showers in the north and west, but southern and eastern areas look to stay mostly dry with the best of the sunshine and warmer here too.

For now, overnight rain has cleared out into the North Sea from eastern areas leaving a legacy of cloud for some eastern areas, but for many it’s a dry morning commute with sunny spells in places, but also some showers from the word go across Wales, NW England, western Scotland and N. Ireland.

Through the morning, there will be sunny spells, but the shower clouds will build - with showers already across western parts, as mentioned, becoming more widespread across Britain by early afternoon, showers will turn heavy towards eastern areas - with a risk of a few thunderstorms developing too. A Thunderstorm Watch has been issued. Some of heavier showers and thunderstorms may produce hail, gusty winds and localised flooding. There will be some sunny spells between the showers, feeling pleasant in the strong sunshine, temperatures reaching 14-16C in the north, 16-18C in the south.

Showers should ease then fade this evening and overnight, then becoming dry with clear spells developing for many. Cloud will thicken across the far west in the early hours, bringing some patchy rain to N. Ireland and western areas of mainland Britain by dawn.

Cloudy with showery rain across northern and western areas Wednesday morning, the cloudy skies with showery rain then transferring southeast across eastern England in the afternoon, though rain lighter and more patchy by then. Brighter skies with sunny spells following for northern, central and western areas in the afternoon, but further showers for western coastal areas blown in by a brisk wind. Temperatures reaching 14-16C in the west, a little higher in the east – with 16-18C. A brisk to strong northwesterly wind making it feel cool out of the sun, perhaps gusts of 40-50mph across hills and coasts of Scotland and northern England. 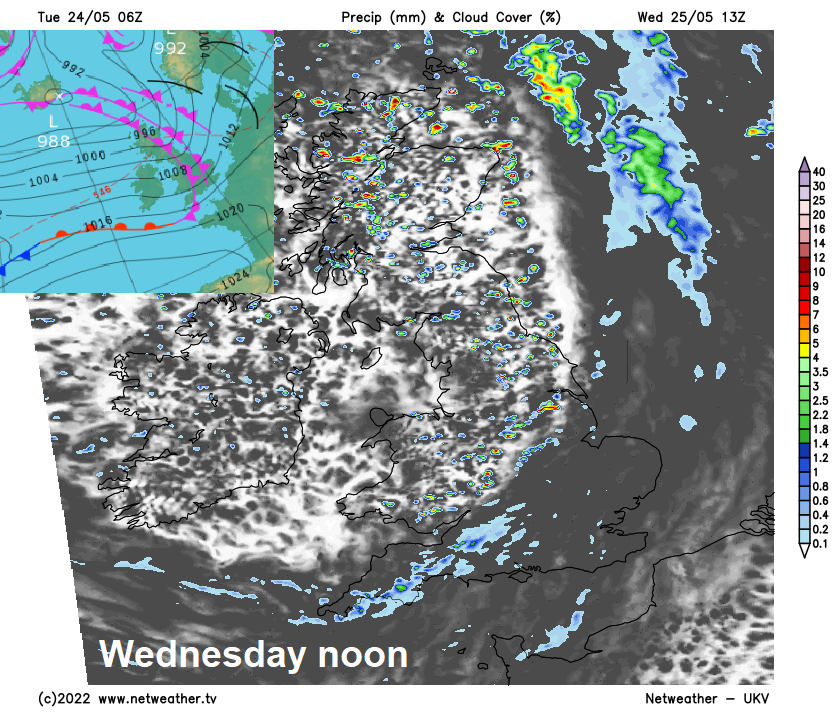 High pressure tries to build in from the southwest on Thursday, bringing a mostly dry and bright day across the far south, temperatures here could reach 20-21C, mid to high teens elsewhere. But rising pressure won’t be enough to stop a frontal wave crossing east across central areas, bringing cloudier skies and a spell of rain to N. Ireland, north Wales and northern England in the morning, though turning lighter and more patchy into the afternoon as it also tries to spread across south Wales and the Midlands. Sunshine and showers for Scotland, most of the showers in the west.

Friday’s looking mostly dry across England and Wales, as high pressure close to the southwest makes a better attempt at building northeast. Sunny spells and showers for Scotland, again showers mostly in the west, these perhaps reaching N. Ireland and far NW of England too. Temperatures reaching low twenties Celsius in the south of England, the mid-high teens elsewhere.

Weekend is looking mostly fine and dry for the first half, as high pressure builds north across western areas. Saturday dry and sunny, temperatures reaching the low twenties in the south, mid-high teens in the north. A little uncertainty for Sunday though, some models bring in a showery northerly flow, showers more particularly a risk for southern and eastern areas, with pressure higher to the west.