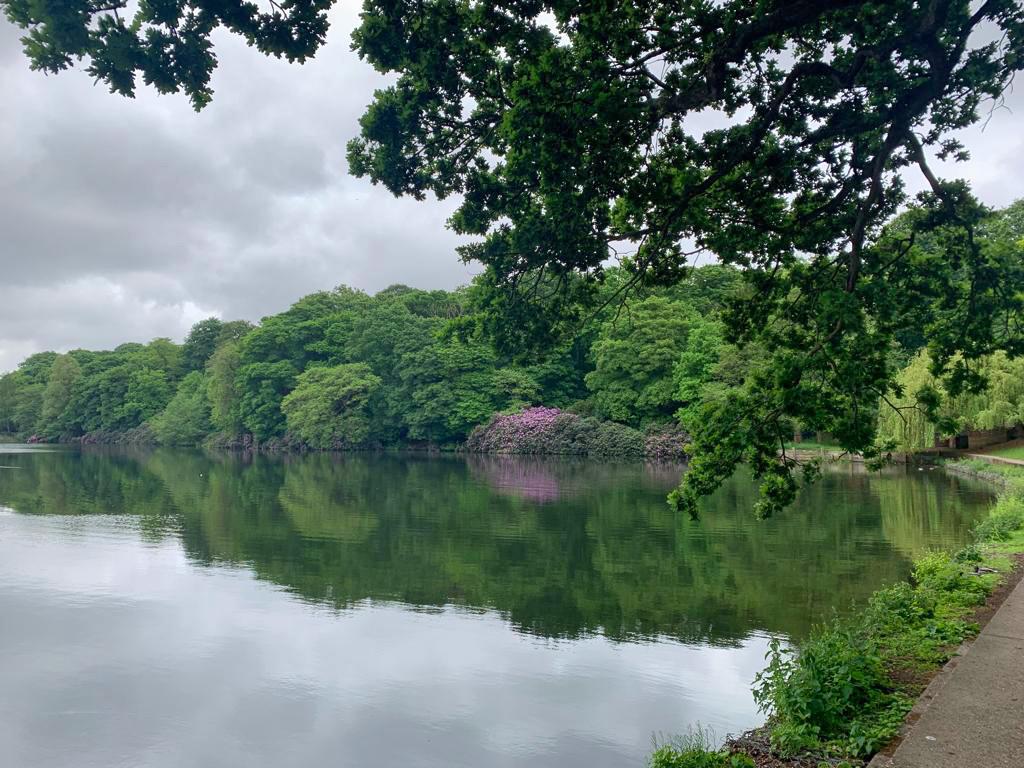 A showery Friday before a fair weekend

There are thunderstorms over northern France for Friday morning, west of Paris and these will reach the top of France this morning and Benelux countries at lunchtime throwing rain over SE Britain. Kent and East Sussex look likely to see heavy rain as it skirts past with a lot of cloud over England and Wales. However many parts of the UK will have a fair day with brightness. There are sunny spells further north for Scotland and at first for Belfast but there is a line of showers already showing on the Radar. 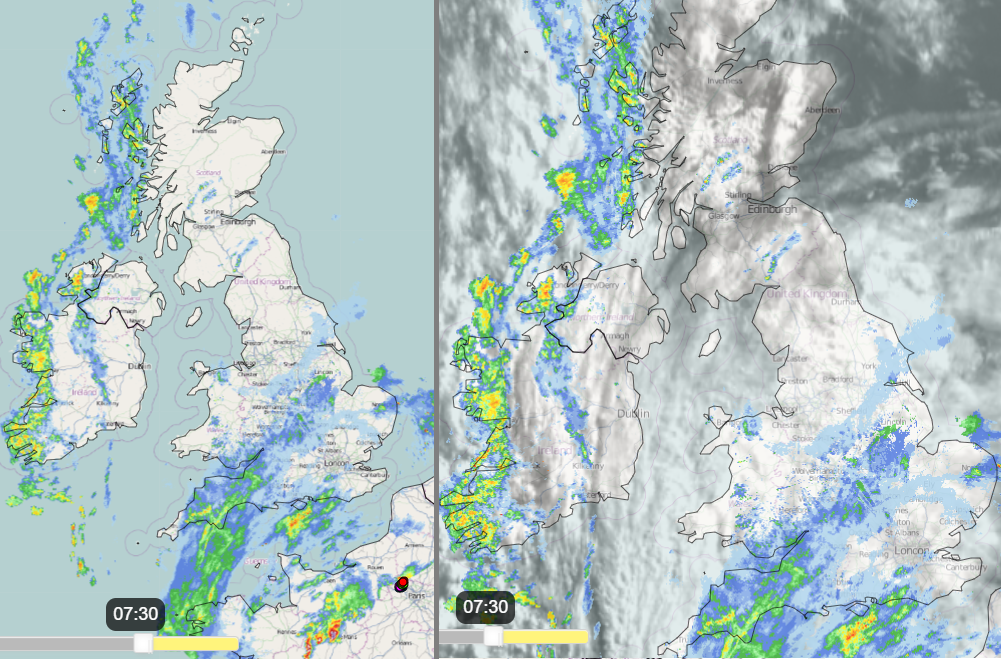 This will edge its way eastwards across Northern Ireland this morning, into western Scotland by lunchtime. It then makes its way over northern Britain this afternoon and evening. Eastern Scotland will fair well for most of the day but see rain showers this evening. Northern Ireland sees the main band this morning, but it left with a bright afternoon with a scattering of showers, and still the odd sharp one. Wales sees a fair number of showers this morning from the west with some heavy downpours. There will be an improvement by late afternoon into the evening with sunshine and fewer showers. There will be clearer and brighter conditions for the end of the day as the line of heavy showers clears from NE England then late Grampian, Caithness and Orkney reaching Shetland overnight. 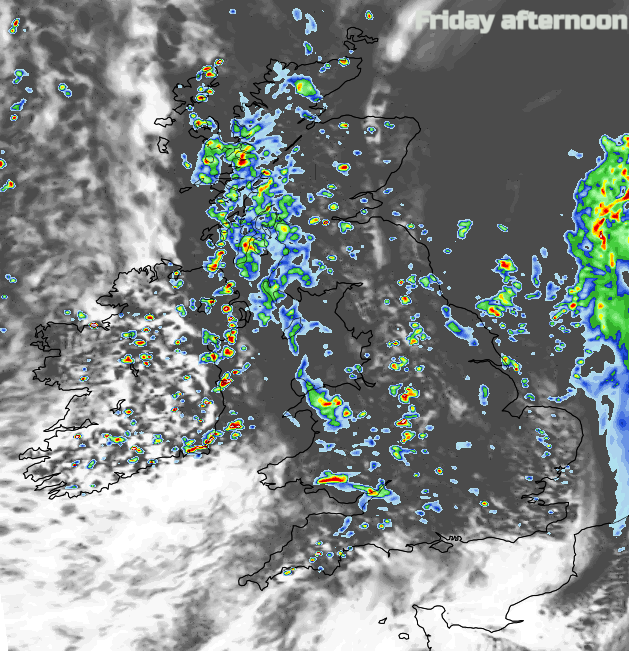 There will be slightly cooler air today with temperatures of 14 to 17C across the UK. Still warm in any sunnier spells but many parts keep more cloud and a light SW breeze.

Overnight temperatures will be around 7 to 12C with a very light west wind. 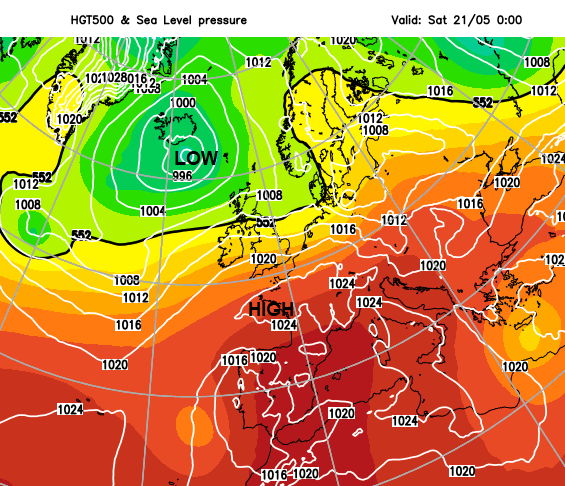 The more northern band of showers on Friday is linked to a low pressure near Iceland. High pressure builds up from the south for the weekend and there will be a lot of fine, dry weather around. However, the westerly flow over the top of the ridge will bring more cloud in from the Atlantic, often high or medium level cloud on Saturday so staying bright. There will be a scattering of showers for Wales, Scotland and Northern Ireland during the afternoon but fair for most and slightly warmer at 16 to 20C across the UK. A frontal band will reach the Western Isles by Saturday teatime bringing rain as the wind freshens and backs to a southerly, here and through the Irish Sea. The GFS model differs to the UKV with more heavier showers on Saturday for Northern Ireland and southern Scotland with heavier bursts.

Sunday starts fine and bright in the east and south with more cloud for the north and west with showery rain. The frontal band moves down the country into Wales and the Midlands by lunchtime with more showers to the north. Similar temperatures on Sunday.

There are signs of a repeat of today’s SE weather. Another thundery plume over the near continent but most of the thunderstorm action staying over France. The heat over western mainland Europe continues today with a very high wildfire risk and temperature warnings in southern Spain forecasting 40C. France has also seen temperatures in the 30sC and recorded (provisionally) the earliest May night when temperatures stayed over 20C. That is called a Tropical Night here in the UK. 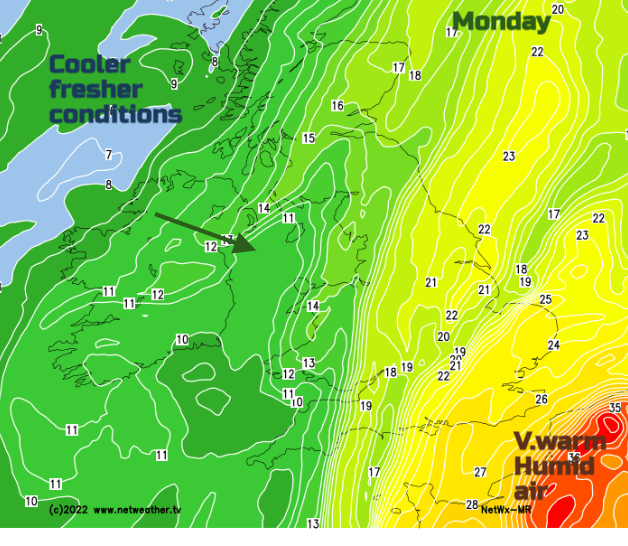 Next week the flow looks to come from the west or even northwest as that same low lingers in the far north. so, a fresher flow which would help keep the thundery rain and lightning away from the SE.