An electrifying weekend, with both Eurovision and English Channel thunderstorms giving great lightning displays, finally. Maybe neither of these things affected you but both caused evening excitement for some. A MCS (Mesoscale Convective System) over northern France caught the eye on satellite, radar and sferic imagery after the heat during the day. Elevated storms did manage to make progress across the cooler English Channel with hundreds of lightning strikes for southern England. There is more thunderstorm action to come and Tuesday is looking very warm.

Overnight there was a stunning lightning show for Dorset and welcome rain over Hampshire and Wiltshire, although other parts of southern England saw little or nothing.

This morning the main band of rain is wrapped around Northern Ireland, extending through the Central Belt and down into NE England. It will edge northwards on Monday. Scotland will see a lot of cloud and showery rain, drier in the far north but any brighter gaps will allow the temperatures to pop up to 17C but cooler for eastern areas with the breeze off the sea. 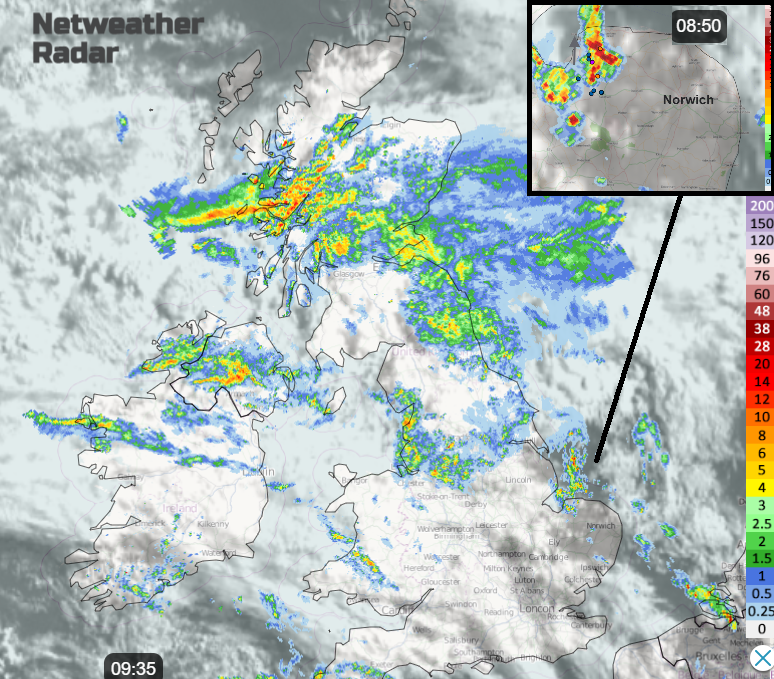 Northern Ireland will brighten and warm up. There will be sunny spells and showers edging up from the south with the risk of thunderstorms this afternoon as temperatures reach 18 to 20C, a warm day. 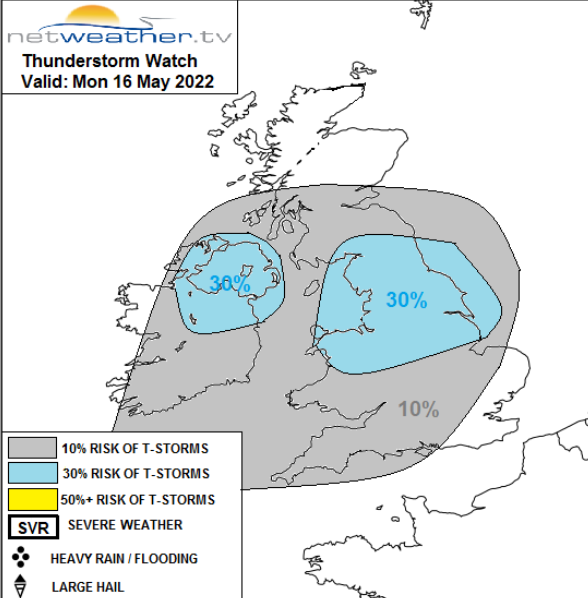 Across England and Wales once the cloud clears, surface heating will aid shower development and there is the risk of thunderstorms today. Not for everyone in the risk area but if you do catch a downpour there could be hail, thunder and lightning and localised flooding.

There is warm, muggy air over Wales and central/southern Britain to start the day. Temperatures today could reach 20 to perhaps 24C depending on the sunshine. For southern Britain there is a light SW breeze so East Anglia and Greater London will warm up well. Greater Manchester and Merseyside also feeling warm today. NE Britain will keep the cooler easterly flow off the North Sea, particularly for northern Scotland. 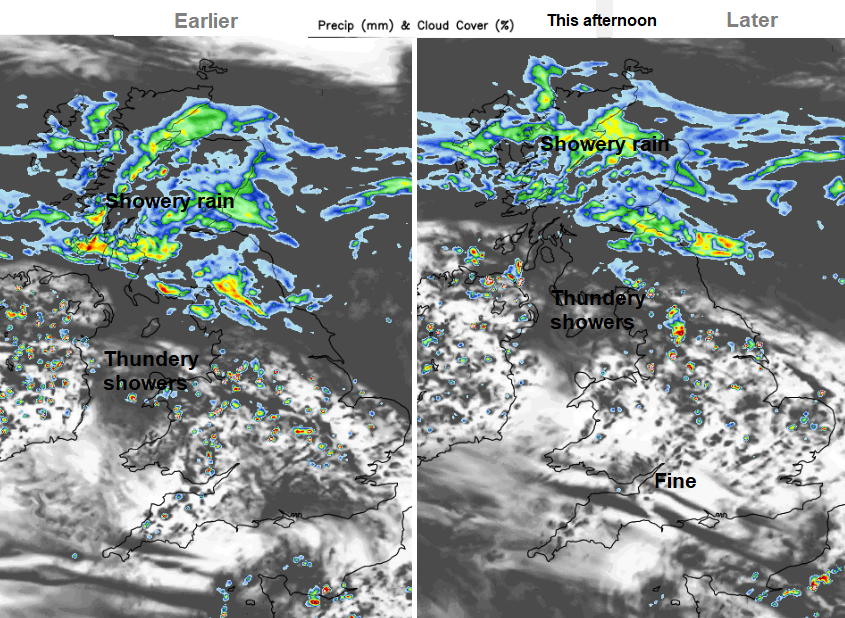 Today we are looking at a scattering of heavy showers and thunderstorms, set off as the sunshine warms the surface. Some places will stay dry and feel warm. The showers fade this evening taking their time of northern England, north Northern Ireland and central Scotland

Overnight the wind turns to the south, very light for much of Britain, brisk around Ireland and still a fresh easterly for the Northern Isles. In this southerly flow Tuesday looks much warmer for parts of Britain. 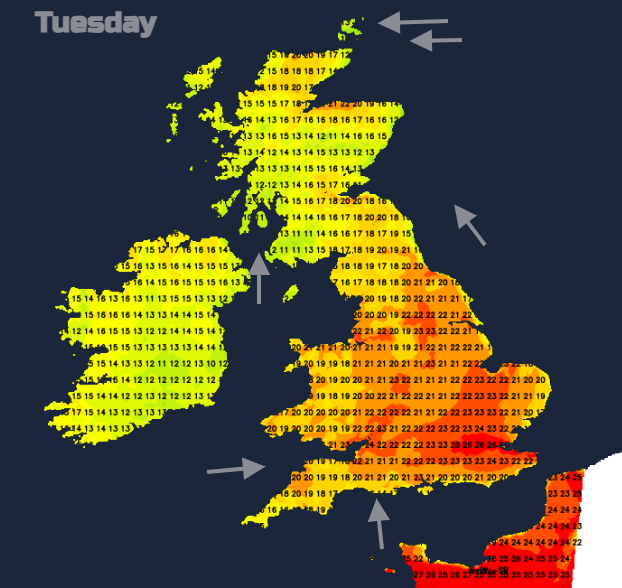 Temperatures in more places will be in the high teens, low twenties with a few parts seeing 24 to 26C. With fine sunshine and light winds it will feel more like summer.

A band of cloud and damp weather will be over Wales, the Irish Sea and Northern Ireland to start Tuesday with heavier rain developing near to SW Britain. This is a cold front with less humid air following but still anywhere seeing sunshine could feel warm. However this front will develop during the day with the heat ahead of it and there will be torrential rain in places by the end of Tuesday. This brings the risk of localised flooding and will need watching as it has been so dry for some parts of England. 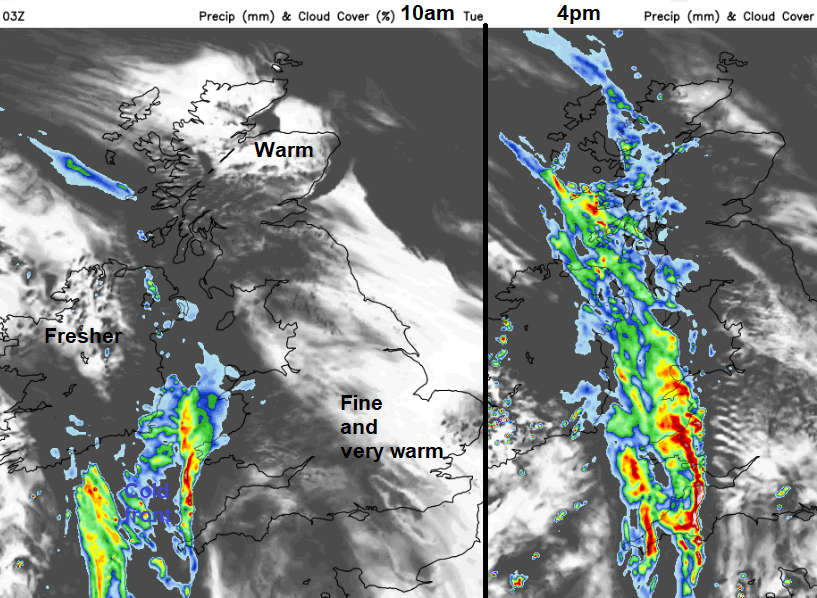 There are some differences on the models, with the GFS pulsing the heaviest rain late afternoon into the evening over Ireland and Northern Ireland, into Wales early evening and then clobbering western Scotland from around 9pm and rotating the heavy band across the mainland and the Western Isles. The UKV has the band over Northern Ireland early afternoon and into SW England and Wales in the afternoon, Western Scotland and Wales at teatime and developing over West Midlands, NW England and inland Scotland during the evening. Again with torrential downpours for the evening.