Wimbledon is back next week, after a hiatus last year, it perhaps symbolises all that’s summery but uniquely British at the same time, with green lawns for tennis courts, strawberries and cream – and of course the unpredictable weather, which is what we’ll look at in more detail. For spectators, Wimbledon will be 50% capacity for most of the tournament, though the finals will be full capacity.

Although centre court and No. 1 court at Wimbledon have retractable roofs, the former operational in 2009 the latter 10 years later in 2019, play on the other show courts are still at the mercy of the weather. And not forgetting Henman Hill or Murray Mount/Mound, whatever you like to call it, where spectators will also be at the mercy of the elements outside watching the matches on the big screen at the side of Court No. 1.

Roof or no roof, the speed of the court is determined by weather conditions before or during matches. The ball will seem heavier and slower on a cool and damp day while seeming lighter and faster on a warm and dry day.

So, what is the weather looking like for the first week of Wimbledon, starting Monday? It’s looking a little unsettled at the moment. Warm, perhaps humid too, but with a risk of showers or longer spells of rain could interrupt play on the open courts most days next week.

The weather models general agree now on an upper low dropping south across western Britain on Friday that will end up over the Bay of Biscay by Sunday. A surface low will drop southeast on the eastern flank of the upper low moving south, the low moving down over England Friday, before ending up over western France at the weekend, where it will wobble around threatening to bring showers across southern England.

Upper low will drop south over Britain towards the Bay of Biscay next few days, before moving NE and loitering near southern UK next week

00z ECMWF deterministic shows the threat of heavy rain on Monday and showers or longer spells of rain threatening Wimbledon the rest of the week. GFS (not shown) shows the low moving away mid-week, so turning drier later in the week.

Some model uncertainty where the upper low goes exactly next week, but models agree the upper low over the Bay of Biscay drifts northeast across northern France or perhaps as far as southern England - where it looks to loiter for some or all of next week, its movement further east impeded by upper level ridge over eastern Europe. The location of the upper low and surface low just north of it will determine how far north heavy showers or longer spells of rain will spread across southern England. Certainly Monday, at the moment, could be a wash out, as an area of heavy, persistent and perhaps thundery rain spreads north across southern England during the day, including Wimbledon. Tuesday and Wednesday could see some heavy showers, but with some dry and bright spells between the showers. Mid-week onwards, models diverge, 00z GFS takes the low near the south away east on the near continent, so drying up Thursday and Friday, whilst 00z ECWMF keeps low pressure across southern Britain – meaning further heavy and perhaps thundery downpours possible for the rest of the week. 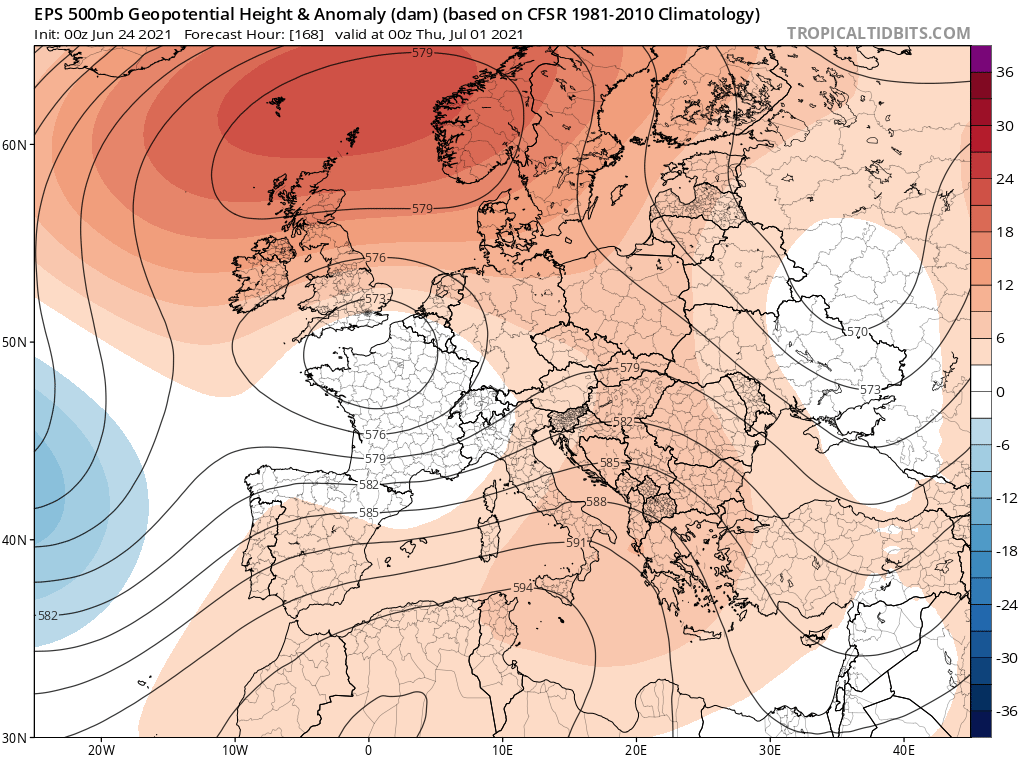 It’s unfortunate because the normally wetter and more unsettled north of Britain actually looks to be mostly dry and sunny most of next week. Good news for Scotland, with the school summer holidays starting next week, in fact, this morning's runs, Netweather Medium-Range below, suggests a heatwave for the central belt of Scotland, mid-20s Celsius Monday and Tuesday, then 27C on Wednesday. Subject to change this far off, but certainly the north looks warmer, sunnier and more settled than the south next week under the influence of a ridge of high pressure.