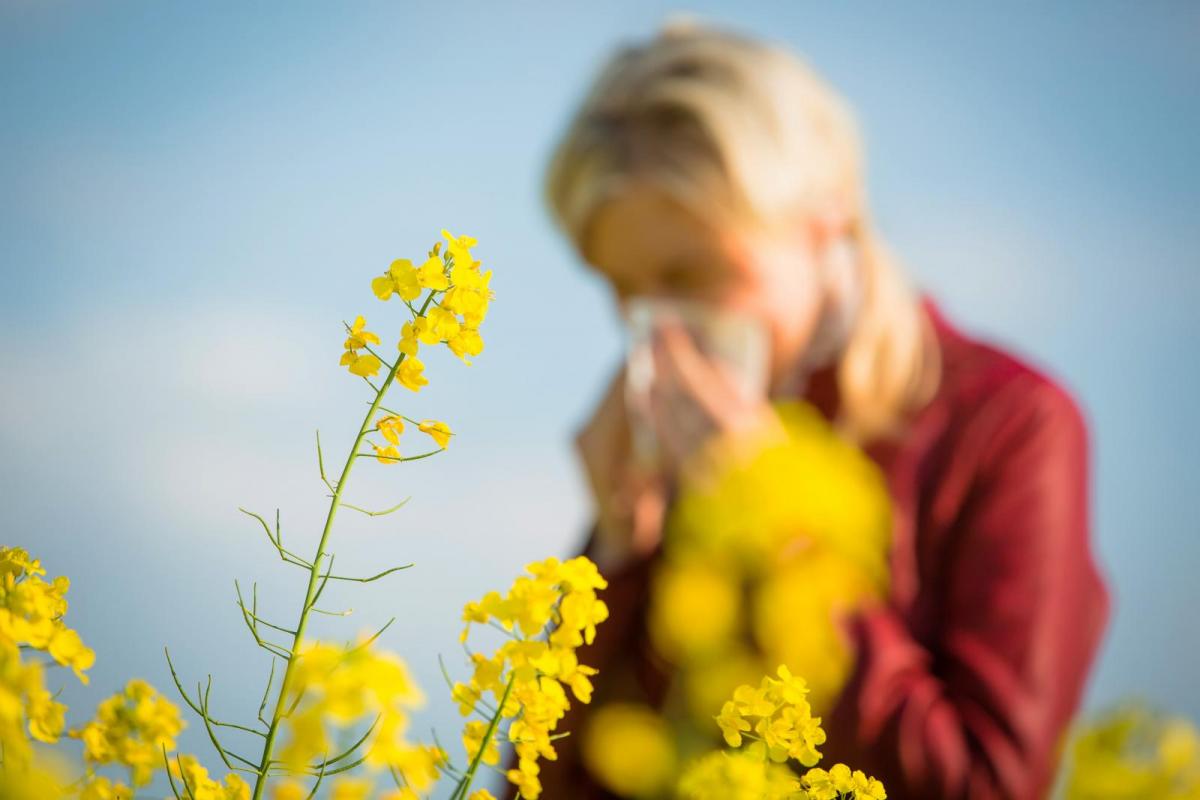 Hayfever affects millions of people in the UK, mainly from grass pollen as summer arrives. However, the hay and the fever are a misnomer. Tree pollen affects people in spring, and there isn’t a rise in body temperature, no fever. It is also known as seasonal allergic rhinitis.

Once pollen is lifted into the air by the wind on warm, sunny days from grasses, trees and weeds, it can set off an allergic reaction which results in itchy eyes, runny noses, a sore throat and lots of sneezes.

Spring and summertime in the UK see many people feeling the effects. The tree pollen season starts first, followed by the grass pollen, which affects around 1 in 4 people. 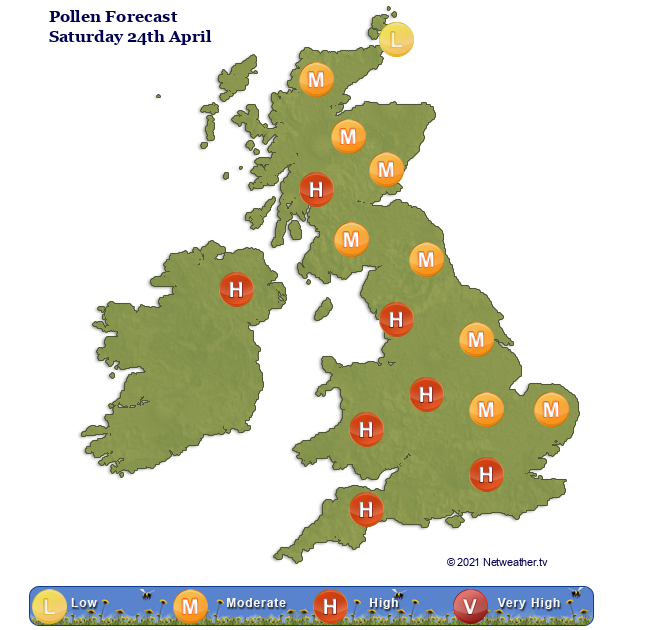 You will have seen the forecast categories for the daily Pollen Count. Low, moderate, high or very high. This count relates to the number of pollen grains per cubic metre of air, and there are monitoring stations around the country. There are seasonal patterns such as weed pollen being a late-summer event, tree pollen winter into spring, and regional variations north to south, which link to the climate and vegetation.

If you have suffered from hayfever for many years, you will know the score, what to expect as people start to mow their lawns more regularly. You can develop allergies as an adult, and sometimes people don’t realise that trees such as the birch do cause a reaction in springtime. Keeping an eye on the pollen forecast could prove useful if you begin to feel out of sorts with itchy eyes and a runny nose (whilst remaining aware of COVID symptoms, of course).

Check the pollen count in your area on your local forecast

It all starts when plant pollens are lifted and spread on the breeze. The plants release their pollen on warm, sunny days. When it reaches your nose, mouth or eyes, it can set off an allergic reaction and inflammation.

The weather affects how much pollen is produced and its direction and dispersal range. The insects pollinating flowers aren’t part of this; it is the breeze bringing the pollen to your face. Pollen counts are higher on dry, warm, sunny days when there is a light to moderate breeze.

What about when it rains?

Rain can wash the pollen out of the air, and if it isn’t as hot or sunny, then not as much pollen is released that day. Generally, if it is raining, then there will be more cloud, so less sunshine and possibly lower temperatures so that can bring down the pollen count anyway. The rain does wash the pollen out of the air, gentle rain, not active thunderstorms. Also, rain that persists is better at continuing to draw the pollen onto its raindrops, cleansing the air, than a short light shower. Once the rain stops, the pollen count will increase again as the plants feel refreshed after a drink and active in the higher humidity and following sunshine.

In squally downpours and lively thunderstorms, the gusty winds can disturb the pollen, pulling it up off trees and grasses, which would raise the count. The larger raindrops aren’t as good at gathering the pollen in. They don’t attract it like smaller raindrops do with their larger surface area per volume and slight electrical charge. Heavy downpours also stir everything up, and the raindrops can break up moist pollen grains into smaller pieces, all of which can then swirl about, increasing the count.

Very hot weather followed by thunder, lightning and heavy downpours can lead to severe allergic reactions. Well into the summer with very warm air over the UK, grass and weed pollen and also fungal spores in the air and air pollution, episodes of thunderstorm hayfever or thunderstorm asthma can occur. The symptoms are more extreme, and in other parts of the world, such as Australia, thunderstorms have resulted in major incidents as the atmospheric conditions came together and so many people were affected. Thunderstorms often appear after long, dry spells resulting in plenty of pollen about to stir up.

Cloudy skies may result in lower pollen counts for a day or so, but when the sun appears, the levels can leap up as it is all released. If it is very windy, then the dispersal of the pollen is great and wide, so counts will be lower. Very light winds won’t enable the pollen to spread much or up to face level. 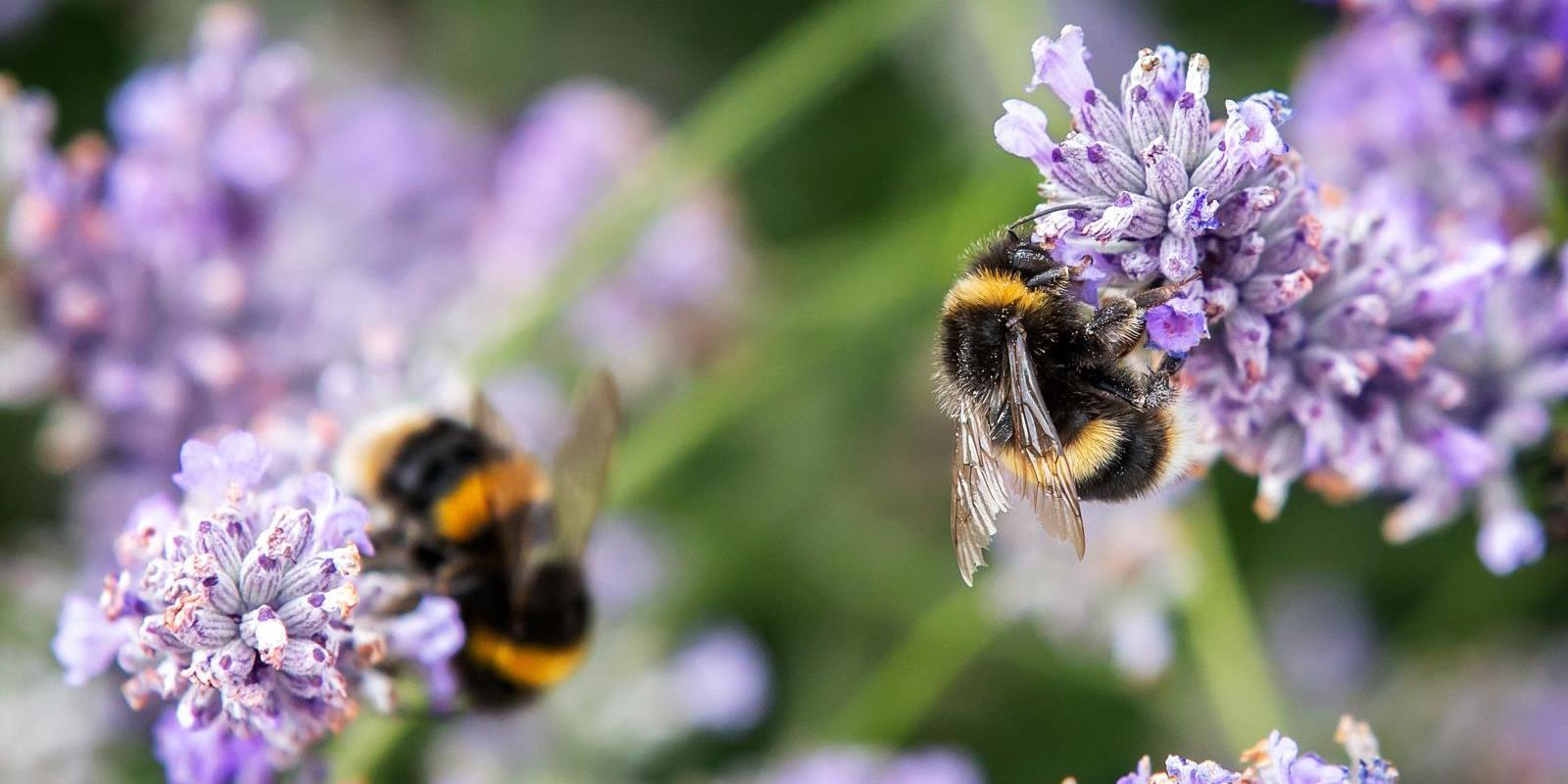 Time of day and exams

The levels of pollen vary during the day, even if the conditions stay steady. There is an initial release and lift in the first part of the morning of grass pollen, just as people head out and pupils go off to school. Then teatime into the evening, another peak occurs as the end of day settling takes place. However, pollen levels can remain high into the night. Due to the urban heat island effect, towns and cities remain very warm overnight in summer, and any settling takes longer. Some pollen is trapped indoors anyway, brought in during the day. On your hair, for example, landing on your pillow when you go to bed.

Exam timetables often coincide with the height of the grass pollen season, bringing discomfort and disrupted sleep to pupils. Stress can make the allergic reaction worse as the immune system produces extra adrenaline and histamine when strained. So, symptoms could be worse even if the outside conditions haven’t changed. Another reason to find time to relax and have a break, although heading outside for a change of scenery or sports might just set you off again. Caffeine can trigger histamine release, so not overloading on that may help too. 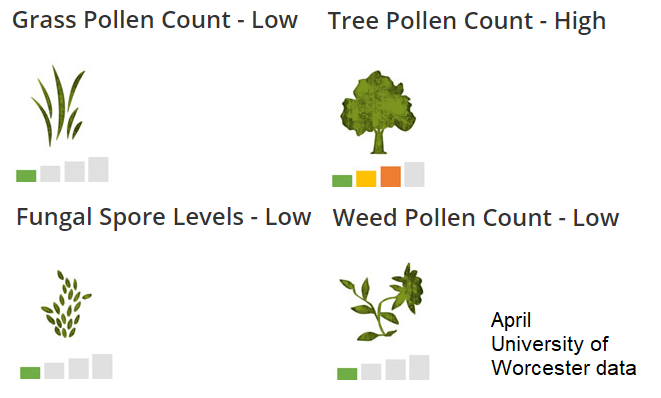 AllergyUK suggests keeping a log of symptoms and how you respond to any treatments. There are calendars showing the various timings around the UK such as the main tree season from birch and then oak running from late March until early June. The main grass pollen season starts from late April in southern England, mid-May for Scotland and continues through July, even into August. Reactions vary person to person, by different pollen types. Still, the pollen forecast could help you prepare or perhaps adjust plans or at least highlight the days to definitely remember your antihistamine and sunglasses.