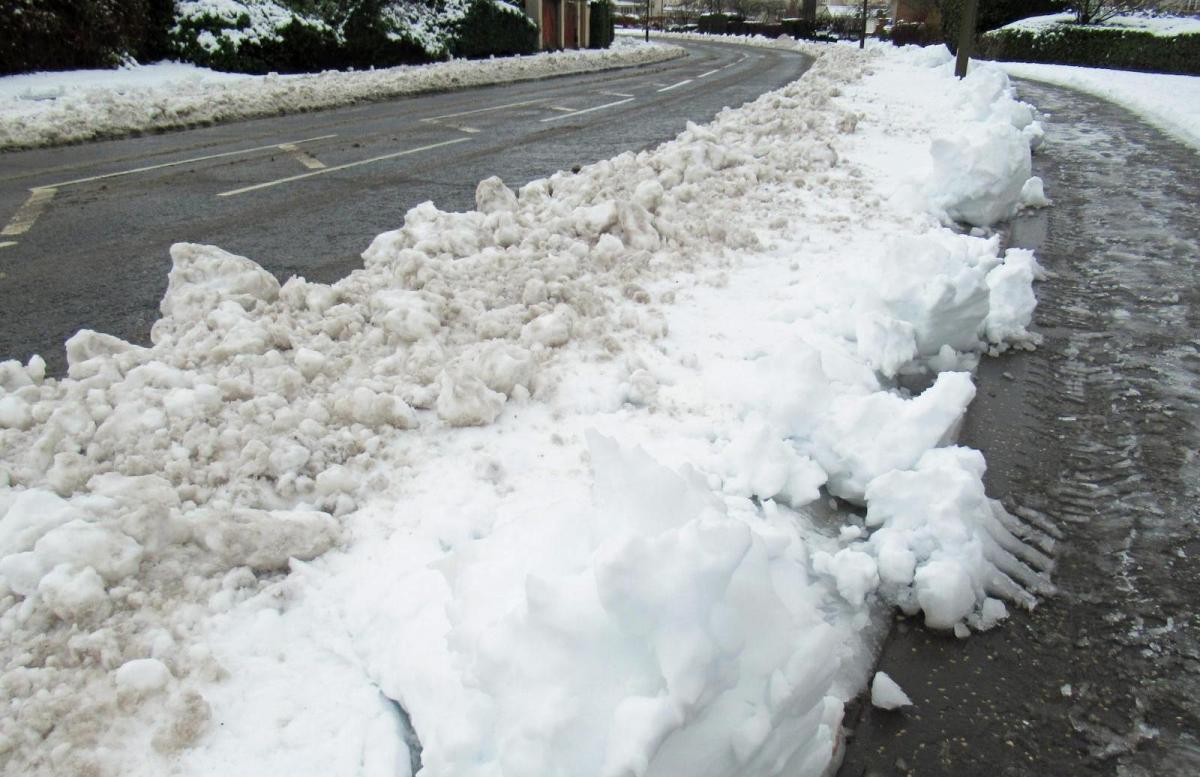 We have further rain and snow for the first week of February with more widespread cold by next weekend. That’s January 2021 over, we await the monthly statistics from the Met Office, all that rain and it’s been cold in the north. February can be a peculiar month with its 28 days. It can bring the utter depths of winter, the all-time UK lowest temperature of -27.2C was recorded in February 1895 (also Jan 1982 and Dec 1995) and the likelihood of snow. Other years, its been all about rain as we saw last year with the wettest UK February on record. With all the recent rain and flooding no-one will want a repeat of that. 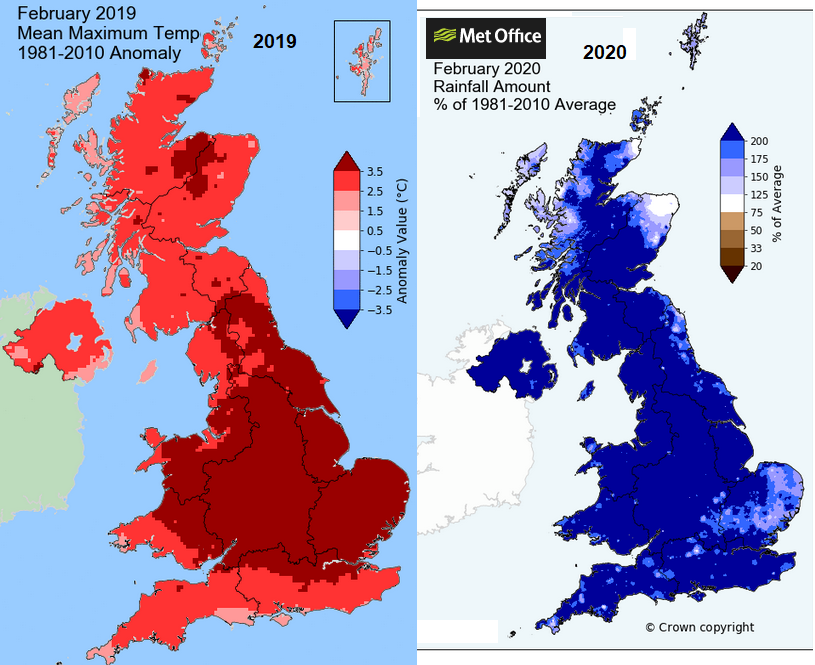 Yet it can be freakishly warm. February 2019 was the 2nd warmest and 2nd sunniest February on record for the UK with the warmest February day and winter day as Kew Gardens reached 21.2C. Manchester got to 20.4C that year whereas this week it will peak at 9C with rain and then sit around zero by Saturday. 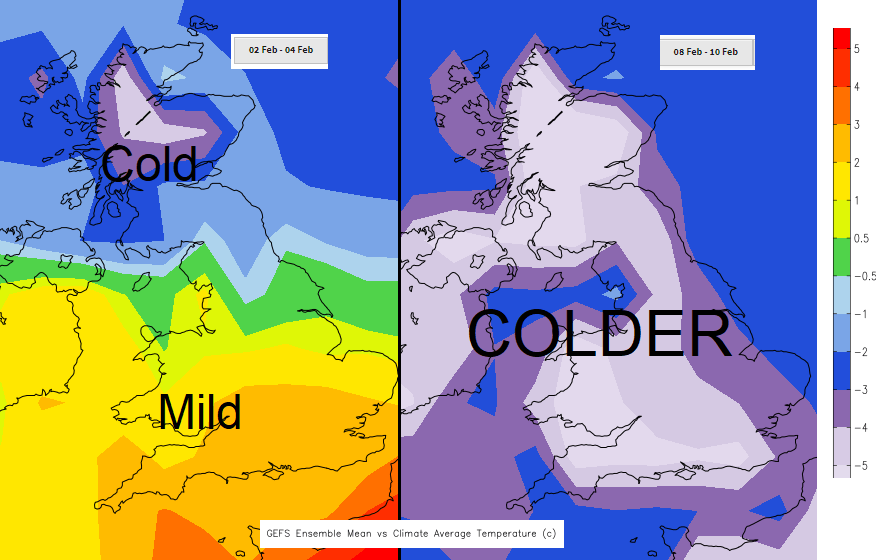 The outlook is colder, after a mild start in the south. The upcoming snow starts once more as frontal rain bands hitting colder air but this week the front remains over Scotland bringing deep snow in places and a real taste of winter. Even colder air then spreads right over the UK from the east bringing a proper chill.

The flooding concerns continue. The Thames Barrier is closing this morning. “Spring tides and very high river flows continue to give [Env.Agency] concerns for Teddington and the lower Thames which can be influenced by the tides.”

“Local river flooding is possible across large parts of England over the next five days and probable along parts of longer rivers such as the Rivers Severn, Thames, Trent and Nene. Local flooding from surface water is also possible” and some coastal impacts for NE England.

An incoming low pressure will sit over Ireland and the UK this week with its weather fronts wrapping around it. Much of Britain will start off drier even fair today but the rain will arrive from the west and SW this evening and things turn wintery overnight as the band heads northeast.

Temperatures this morning range from +5C in southern England, +8C for Plymouth to -3C for Durham, -8C in the Highlands. There is more cloud in the south with misty, murky conditions, damp too but not heavy rain. Further north in Britain, skies are clearer but there is ice and a scattering of sleet and snow showers heading in from the North Sea to eastern Scotland and the Moray Firth.

The frontal rain is quicker, already into Northern Ireland and showing a slightly wintry tinge on the radar. The main heavier rain will come later to SW Britain but during today there will be more cloud, outbreaks of mainly light rain and sleetiness for Northern Ireland reaching over the North Channel to SW Scotland. The wind will pickup around this rain, a brisk SE wind for the coasts. Elsewhere light winds with temperatures of 4 to 6C, 2 or 3C for Scotland. 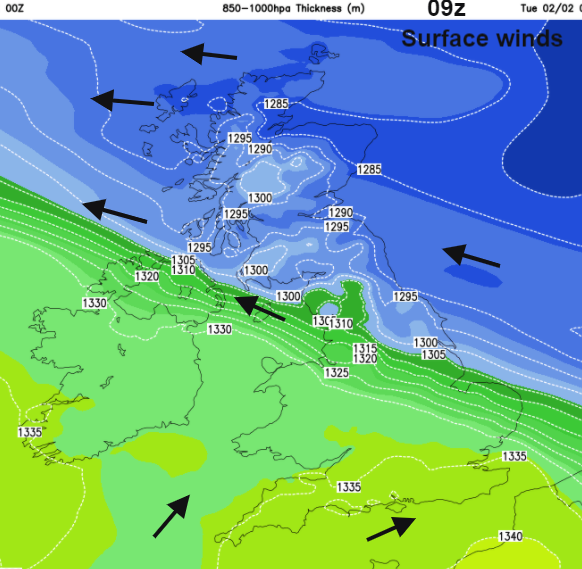 Gradually the Northern Ireland rain and sleet will reach over more of central Scotland where there will be light snow. The main band of rain moves up over Ireland, SW England, into Wales before midnight. Then marching over Northern Ireland, mostly as rain but with snow over the highest hills and over Wales, into the Midlands and SE Britain. At some point, it begins to turn to snow. The Met Office Snow and Ice warning for Tuesday highlights North Wales and northern England up into 2/3rds of Scotland. Also, Northern Ireland as conditions with the ice will bring difficult travel conditions.

Freezing rain is also being warned of, which would make conditions even worse for northern England.

“As well as snow, a period of freezing rain is possible for parts of east Wales and the north Midlands. Should this occur widespread icy stretches would form. “MO

During Tuesday there will be significant snowfall for northern hills, further south it will turn back to rain. It remains cold in the north with a SE to east wind and turning much milder from the southwest, with temperatures of 10 to 14C. Bursts of heavy rain head into Wales and across southern England as the wintry weather continues over the Pennines and parts of Scotland into the afternoon. 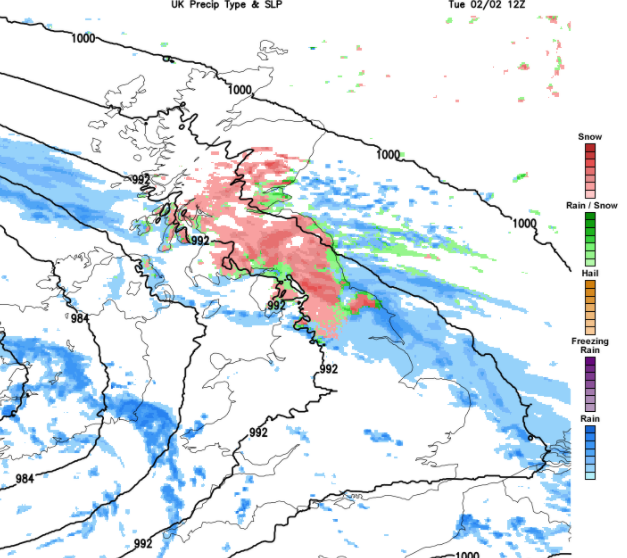 The snow then sets in over Scotland, particularly the hills inland during Tuesday night. A spell of heavy rain will move past southern England, the model showing a frontal wave should bring wet and windy weather through the Channel and to south coast of England early on Wednesday.

Scotland will stay cold in a brisk easterly wind with temperatures of 3 or 4C, milder further south. 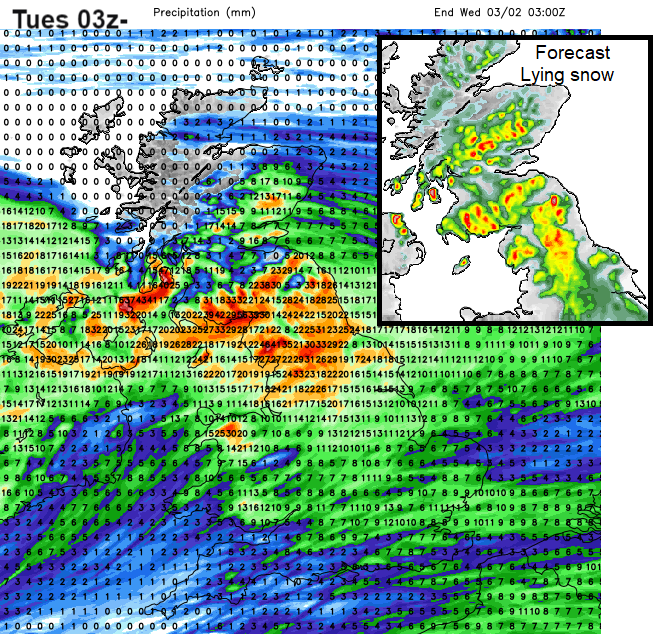 So, there is more rain and the flooding issues linger from January. But the snowfall for parts of Scotland, also over the Antrim Hills and the Pennines looks to be significant and continuing Thursday into Friday for Scotland, particularly in the east as the colder air begins to reach in. 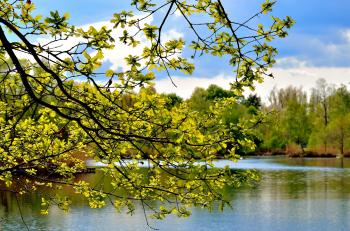 High pressure well in charge of the UK's weather