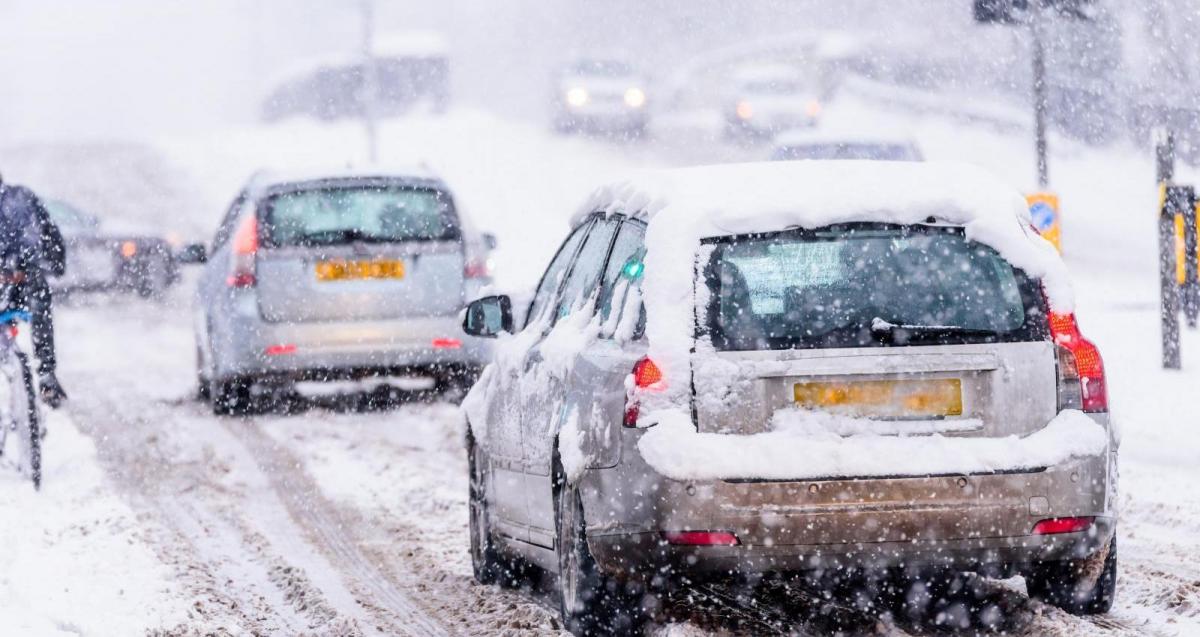 The UK will be the battleground between cold air close to the east and mild Atlantic air over the next few days. Milder air will make inroads across the west as a frontal boundary moves east, but the boundary will bump into cold air across the northeast today, with snow falling here as the precipitation arrives, especially but not exclusively over high ground. The risk of heavy sleet and snow pushing across Scotland and northern England has triggered an Amber Warning from the Met Office.

The frontal boundary stalls and even looks to try and move back across central and northern areas on Thursday, with colder air undercutting from the east turning rain to snow further south across northern and eastern England. Rain, sleet and snow eventually clears south or peters out by Thursday evening, with high pressure building on Friday. But with a slack cold flow spreading from the east as the high builds in, so a cold day. An Atlantic frontal system pushes in from the west on Saturday, but as it bumps into the cold air of the retreating surface cold high, some models are pointing to snow falling on the leading edge of the fronts as they bump into the cold air. High pressure builds back in from the southwest on Sunday, but it will be a milder high. Then into early next week, milder and increasingly unsettled for a time, as a low pressure system moves in off the Atlantic. But it could turn colder from the north later in the week, with a corresponding increased of risk of snow in places, as an upper level ridge builds over the Atlantic and Greenland while upper trough builds to the east – which will serve to pull down colder air from the north.

In more detail for the snow risks over the next few days:

A NW-SE aligned warm front, with a band of rain along it, is pushing in from the west today, but as it bumps into the cold air towards the east, it is turning to snow as it heads east across Scotland and the far north of England – where the coldest air is, particularly over higher ground but increasingly even to lower levels further east. Temperatures are still around freezing in Edinburgh and Dundee late morning, following overnight minimum temperatures of -2 to -5C. 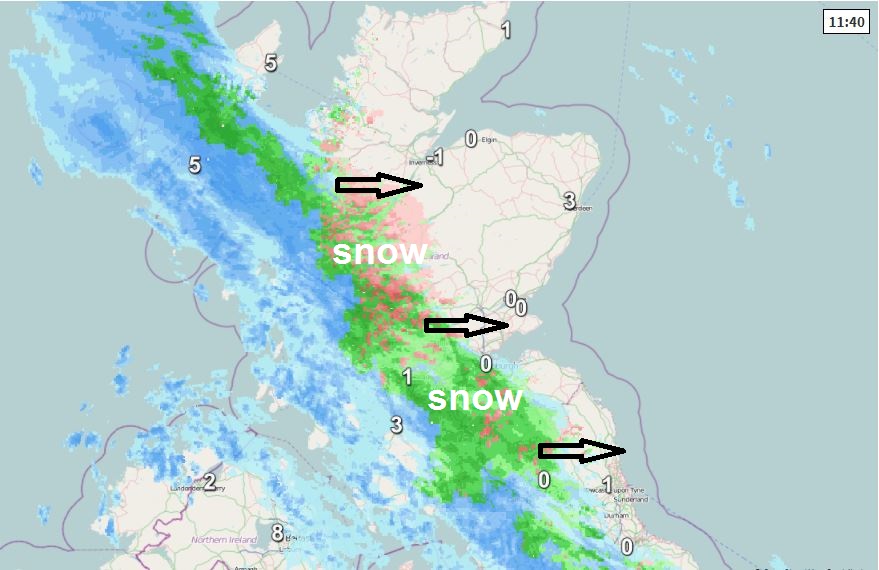 The Met Office have upgraded the previous yellow warning to an Amber Warning covering an area across central and southeastern inland Scotland and into the far north of England. The front is bringing quite heavy rates on radar, with significant accumulations possible over higher elevations and some accumulations at lower elevations too, which will likely bring some travel disruption:

Rain will turn to snow across Scotland on Wednesday afternoon and evening, initially on high ground, but increasingly to lower levels. During Wednesday evening and night the risk of snow will extend southwards into more of northern England. 10 to 20 cm snow is likely to accumulate above 200 metres with greater amounts at higher elevations. Amounts at low levels (below 100 metres) are less certain, but 5 to 10 cm is likely in some places by Thursday morning. Snow will persist into Thursday morning, slowly dying out during the afternoon. 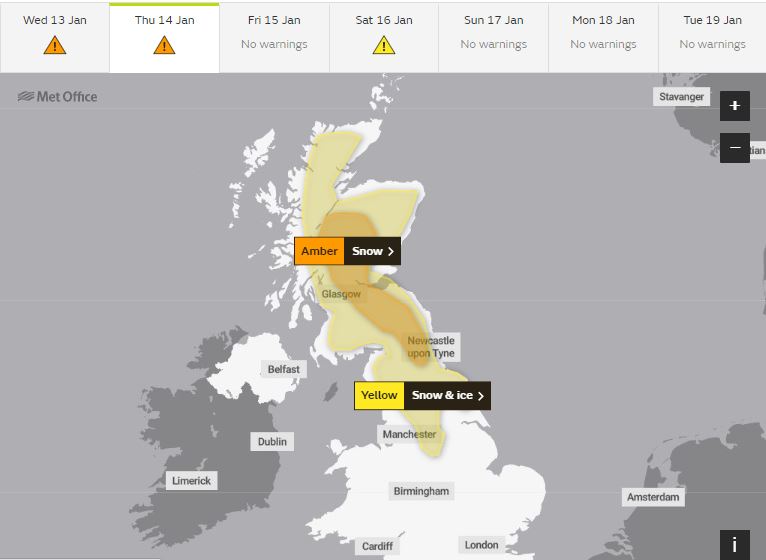 The frontal boundary stalls though tonight and through Thursday in response to a developing low that moves southeast across southern Britain, which will back the flow to the north of the low stalling or even the frontal boundary moving back west, while also pepping up the rainfall across the south. So snow is likely to persist across Scotland and northern England tonight into Thursday morning.

Because the flow is turning colder as it turns easterly at the surface, further and further south across England on Thursday, as the front stalls or even moves back west, the models indicate rain turning to snow further and further south across northern and eastern England through the day too. Snow across England mostly settling over the hills, perhaps wet snow falling but not settling to lower levels, but always tricky such marginal situations to rule out surface temperatures at lower levels falling enough to allow snow to settle and give a slight covering too. Some models indicate snow falling as far south as the Midlands, northern Home Counties and East Anglia. But a lot of uncertainty how far south snow may fall tomorrow. The rain, sleet and snow looks to fizzle out or sink south from most places by evening.

A drier day on Friday, as high pressure builds, but with a cold surface feed from the east and widespread frost from overnight before the high builds in, it will be a cold but mostly fine day.

A cold frosty Friday night for most leading into a cold start to Saturday. However, a frontal system moves in from the west on Saturday, as it bumps into the cold air snow is likely to precede rain moving east with the frontal boundary across the north at least. 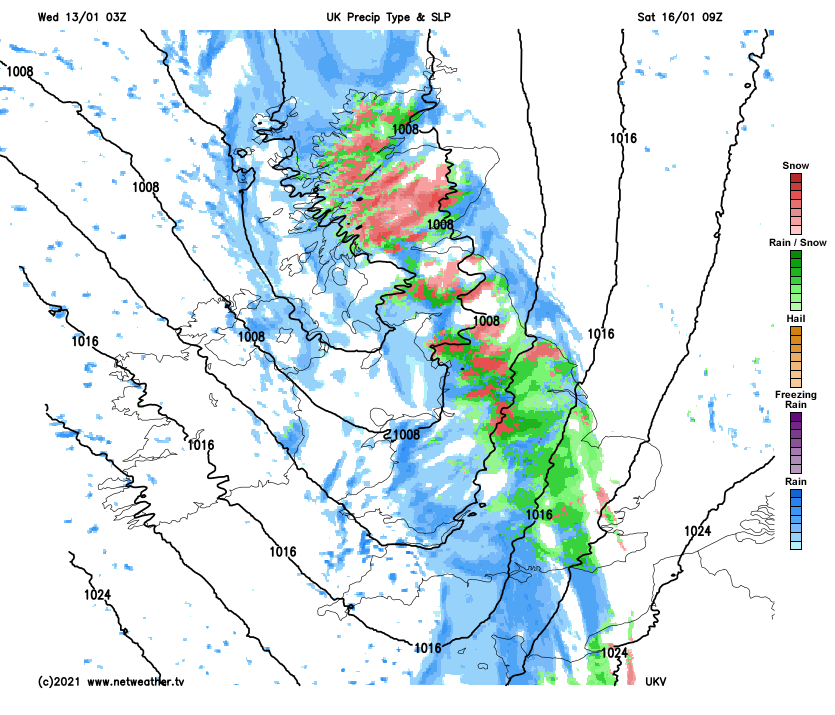 And the Met Office late this morning has issued a yellow warning for snow and ice for Saturday for Scotland and northern England as far southeast as East Anglia. Snow most likely to settle over higher ground, but snow may fall to lower levels, but uncertainty over whether it will settle too.