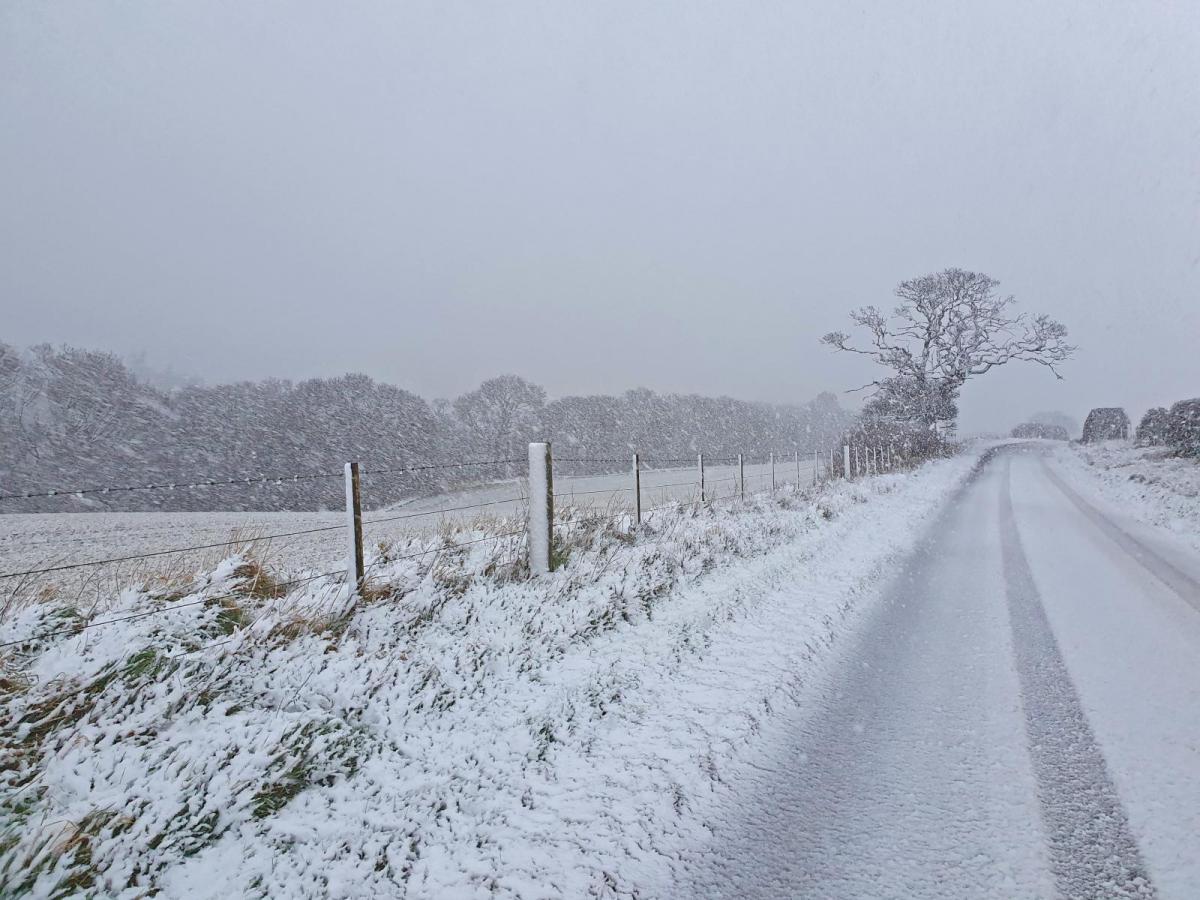 Tonight and Friday will see a risk of snow for some, as cold polar air becomes entrenched across the UK while developing lows and associated frontal systems spin up from the southwest into the cold air. Most snow will fall and accumulate over higher ground, but across Scotland and northern England it may fall to lower levels for a time overnight. Some wet snow can’t be rule out elsewhere too.

A cold polar trough continues to extend south into western Europe from the polar vortex over the arctic over the next few days. Quite a complex surface pattern developing across the UK and Ireland, as the upper trough extends south. Parent low centred NW of Scotland continues to fill, while baroclinic zone / frontal wave slides east across southern Britain trailing out into the Atlantic. This boundary marks a very cold, clearer but showery Arctic maritime flow spreading south from Iceland over the Atlantic and Ireland and less cold and moist returning polar maritime westerly flow streaming in off the Atlantic. The frontal wave bringing outbreaks of persistent and locally heavy rain across England and Wales through the morning, falling as snow above 300 metres across Wales and northern England. 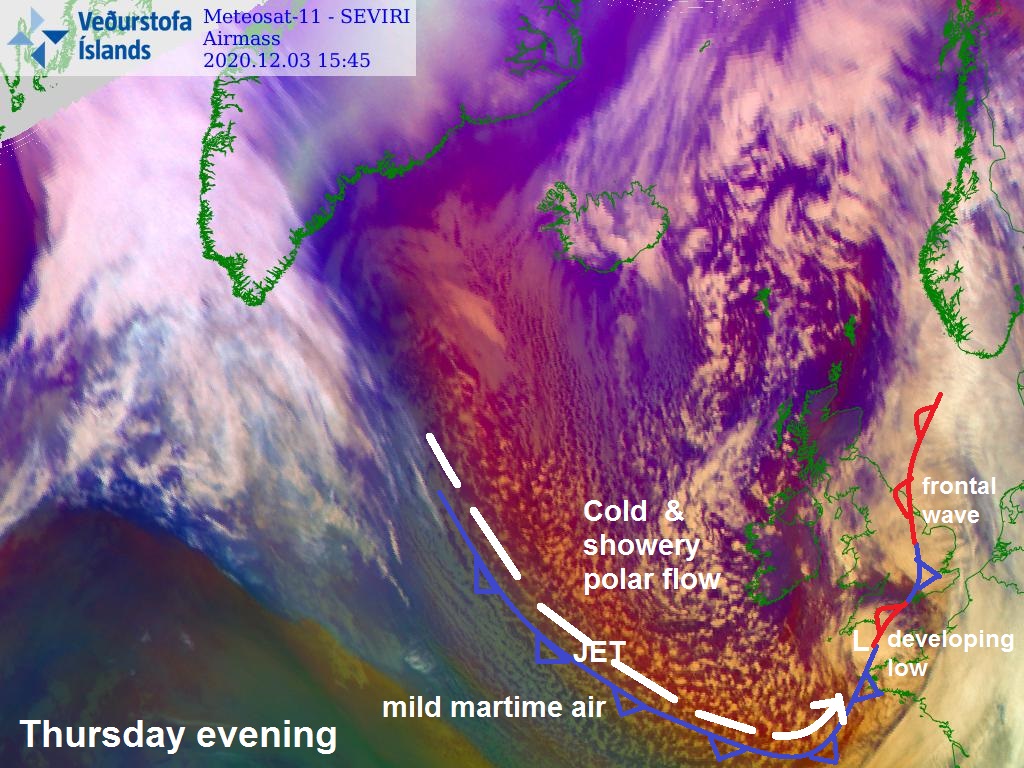 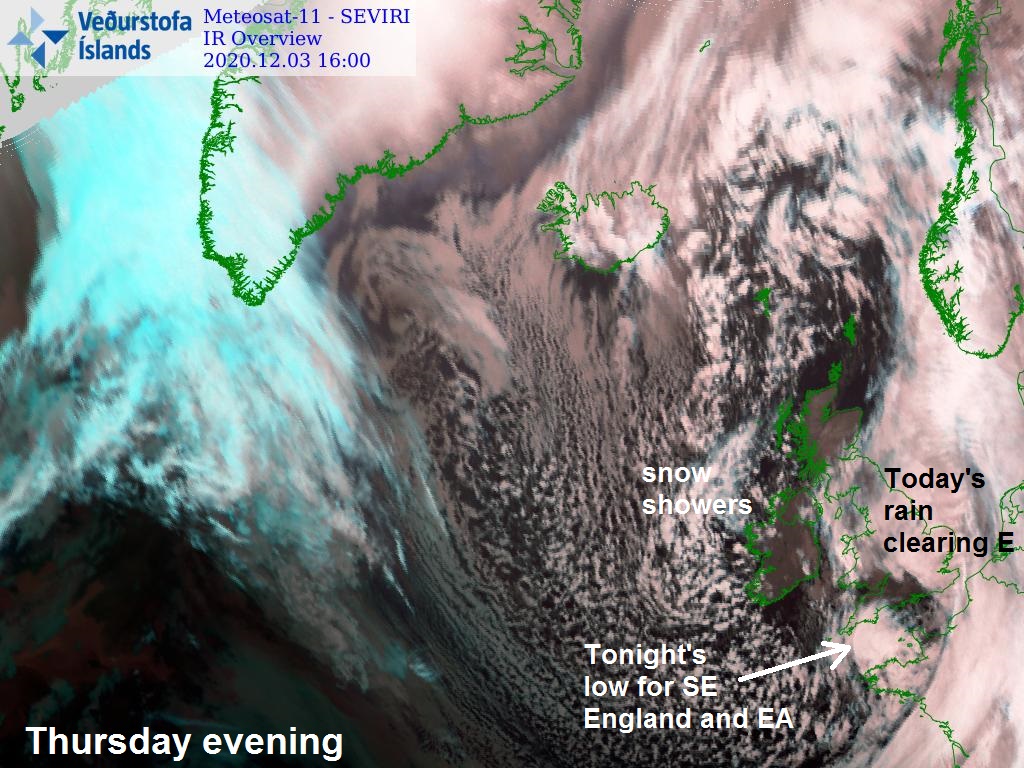 The rain along the frontal wave will gradually clear east through the afternoon and evening from most central and southern areas of England, while a shallow surface low develops and tracks northeast across England. However, an area of rain will wrap around the northern and western side of this shallow low for a time across northern England and parts of Wales, falling as snow over high parts, such as the Pennines, Cumbrian Fells and mountains of north Wales. Through this evening and overnight, rain and hill snow will ease for a time. But, just off west Wales, a north-south convergence zone will set up, sometimes referred to as the ‘Pembrokeshire Dangler’, feeding in showers overnight and through Friday from the north down across Cardigan Bay and just inland along west Wales, down through Pembrokeshire and as far south as Devon and Cornwall. These showers falling as snow over higher ground.

Further south, meanwhile, a new low looks to form north of Britanny by early this evening, in a wave along frontal boundary trailing through English Channel / SW approaches, this low looks to move east through the English Channel before turning northeast then north across SE England and East Anglia tonight and Friday morning, bringing a spell off heavy rain and perhaps hill snow, as it meets cold polar air, before rain, sleet and hill snow moves northwest into Lincolnshire, northern England and perhaps north Wales by Friday afternoon, as the low continues to move up the eastern side of England before stalling, perhaps giving several centimetres over the Peaks/southern Pennines looking at latest models runs. So we may see yellow warnings for snow issued by the Met Office for here too. 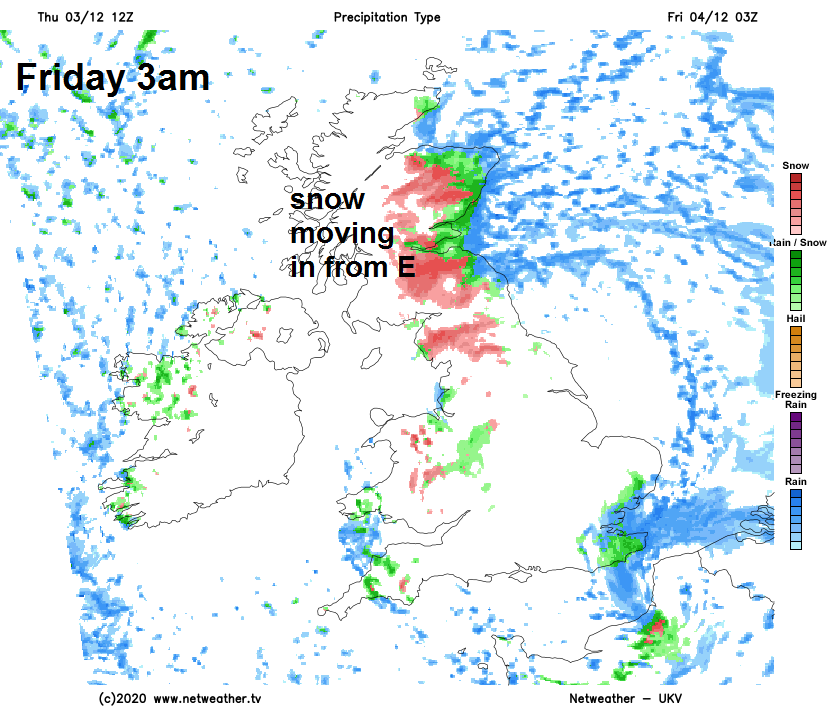 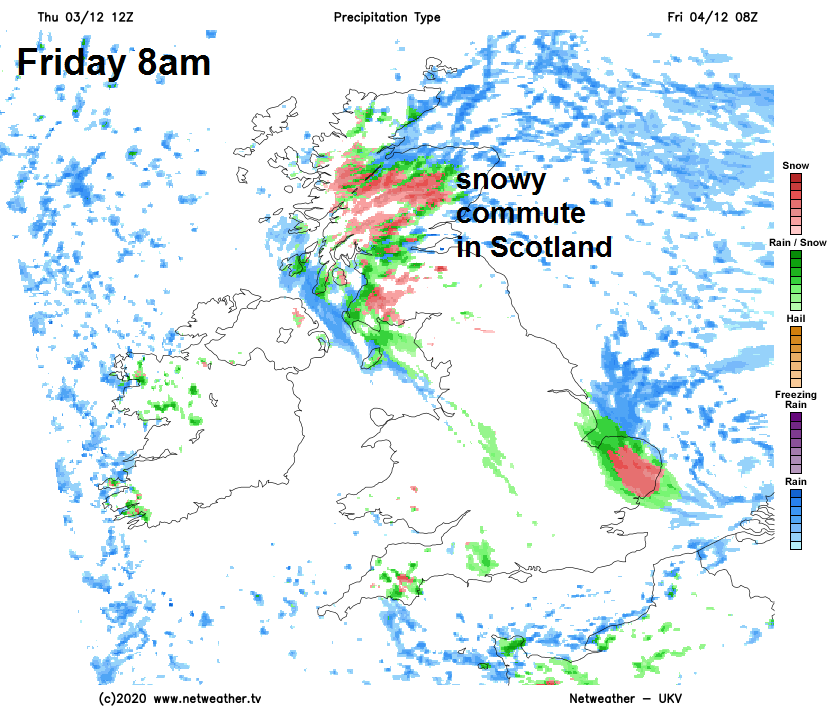 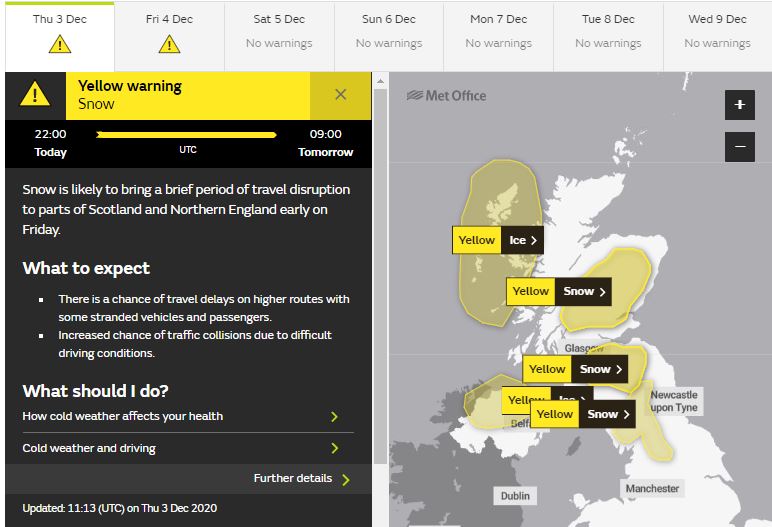 Further north, sleet and snow showers which swept in from the west overnight across western Scotland made it through the central belt as far east as Edinburgh, bringing a covering of snow at dawn across Glasgow and Edinburgh. These wintry showers have eased back to the western coastal fringes of Scotland and Ireland through the day, as the strong westerly wind bringing them overnight has eased. So the day finishing on a drier and brighter note across Scotland. But this evening and overnight a warm front, linked in with an area of low pressure moving up the east coast of England, mentioned earlier, will move west from the North Sea bringing a band of rain which looks to fall as snow on its leading edge as it moves inland and bumps into the cold polar air across Scotland and northern England overnight. The snow eventually turning back to rain away from higher ground, as less cold air moves in from the North Sea. Met Office yellow warnings for snow and ice have been issued across parts of Scotland and NW England, for this snow spreading in from the east overnight and Friday morning.

Cold easing a little as we head into the weekend, so although there’ll be showers around, they’ll be mostly of rain, away from hill tops and mountains. Where skies clear overnight though, a frost will readily develop, so a risk of ice on untreated wet surfaces following recent rain.