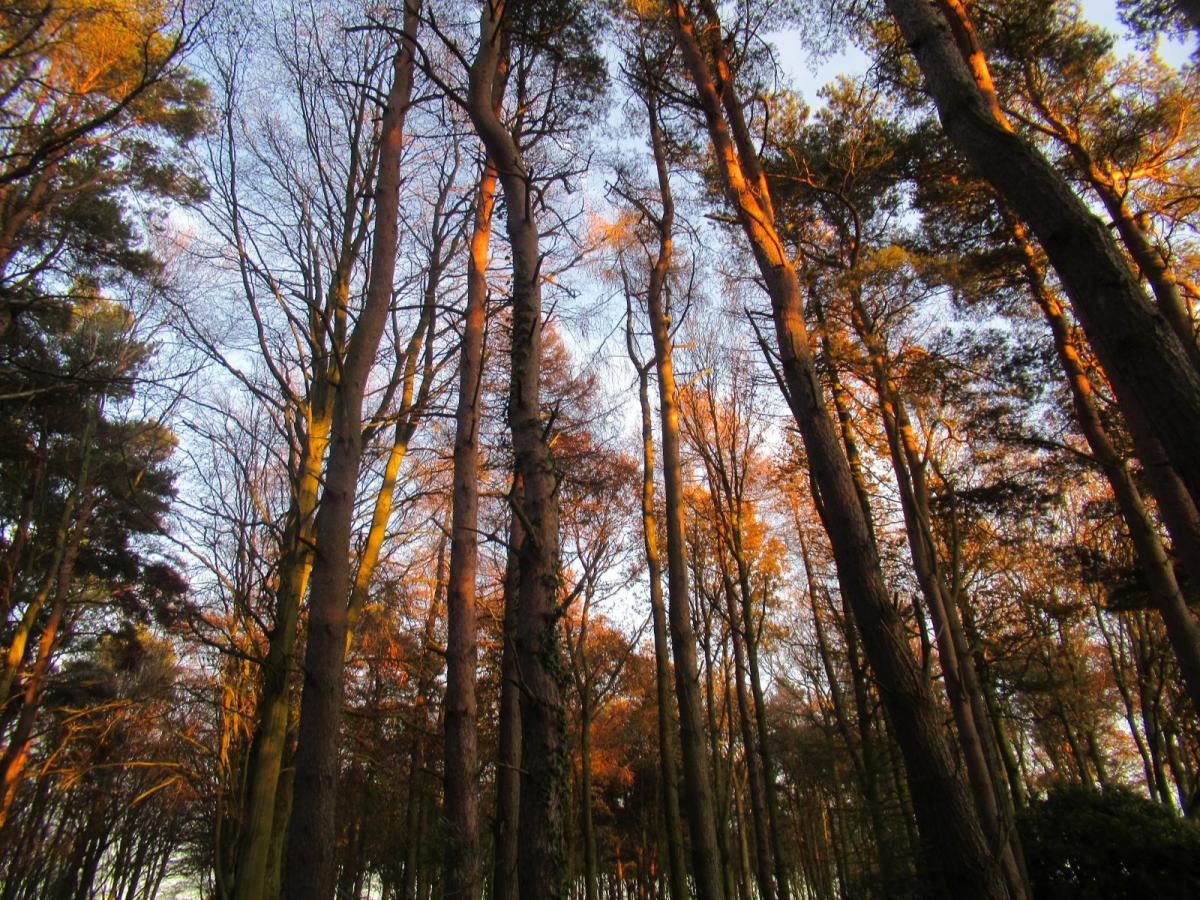 Milder briefly, wet for NW UK then colder with frost and fog later this week

This week follows a similar pattern as last, just as a toned-down version, not as windy or as warm. A warm sector brings milder air over the UK with temperatures into double figures. Then the cold front clears through midweek and there will be a chill in the air with frost and this time more fog. The difference will be that the colder air stays, into next weekend, potentially into the start of December.

The beginning part of the week sees a lot of rain for Northern Ireland, western and SW Scotland and Cumbria. As pressure begins to rise the weather becomes more settled and dry for many. The winds will also become lighter after a breezy start in the mild south to south-westerly flow. The only wintry precipitation signs look to be sleet and snow showers over the Scottish Highlands once the cold front is through. The frosty mornings will show we are on the way to winter though. 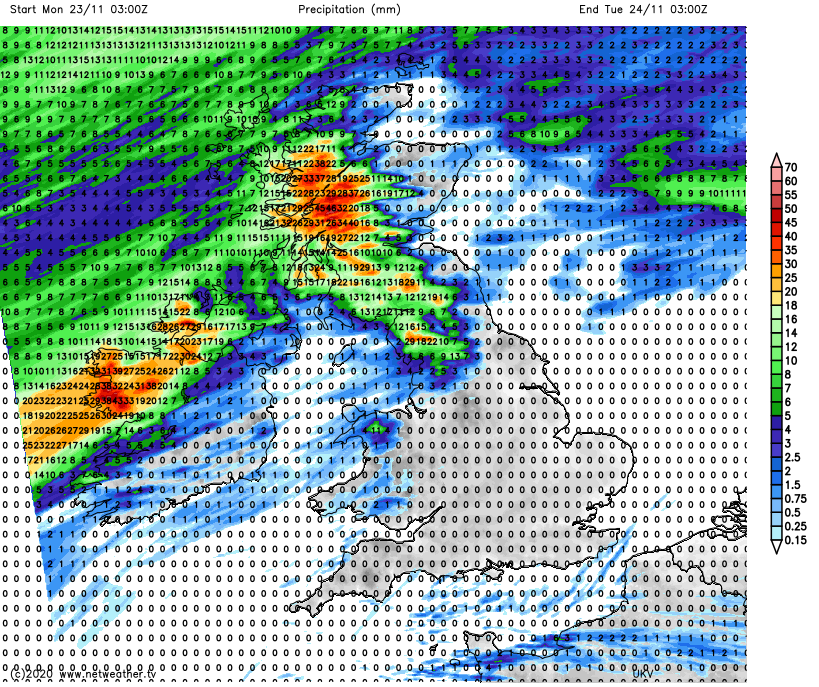 It’s a cooler start this morning with a bit of frost where the skies have been clear. Also, some mist and patchy fog. A low pressure will slow down south of Iceland and the frontal bands from this will affect our UK weather. The occlusion and warm front bring rain to western Scotland and more patchy outbreaks over Northern Ireland from the west this morning. Ahead of that, there will be a lot of fine, cool weather with sunshine for some but more cloud over northern England and gradually Wales. There is an old weather front lurking through the English Channel bringing more cloud and a little rain. That heads away eastwards today bringing more cloud to Brighton and Folkestone.

SE Britain will have a fine afternoon with light winds and sunny spells. Further north and west there will be more cloud, patchy rain and freshening winds, from a mild SW direction. As the light fades the cold front will be reaching NW Scotland and Co. Tyrone bringing some heavier bursts of rain and stronger winds, even coastal gales for NW Scotland. 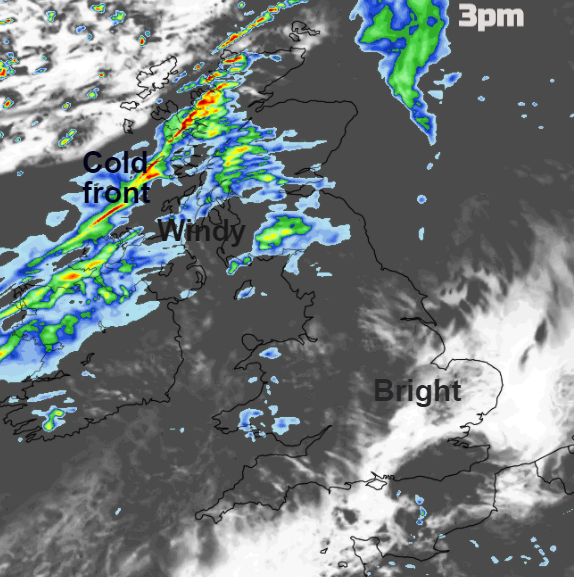 The frontal band wavers about over western Scotland with more heavy rain, also for Northern Ireland, into Cumbria with outbreaks of rain over NW Wales, mainly for Snowdonia. Kent and Sussex, Surrey even south London could see temperatures fall away with some early fog under clear skies and with hardly any breeze. 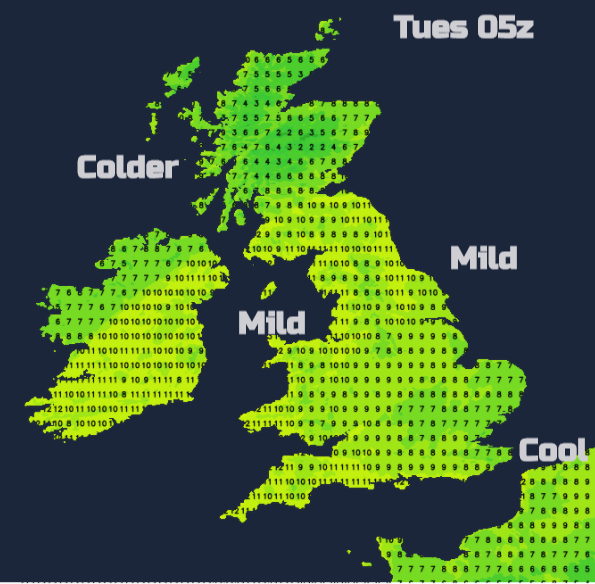 By Tuesday morning there will be a distinct frontal boundary with light winds, cold air to the north even bright spells for northern Scotland. More rain and cloud along the front and mild air to the south. Still windy through the Irish Sea and over northern England, southern Scotland to start Tuesday.  Northern Ireland and Scotland face another wet day with rain again reaching over Cumbria. Brighter skies further south and east and mild. Temperatures will be 11 to 13C

The frontal band begins to edge SE on Tuesday evening and it turns distinctly colder behind as the winds veer briefly to the northwest.

The frontal band will bring showery outbreaks over England on Wednesday, edging slowly southwards. Behind this will be increasingly sunnier skies, a nip in the air and a colder NW wind but drier. Only the far north of Scotland will have showers, and these could bring hail and thunder with a cold north wind setting in. 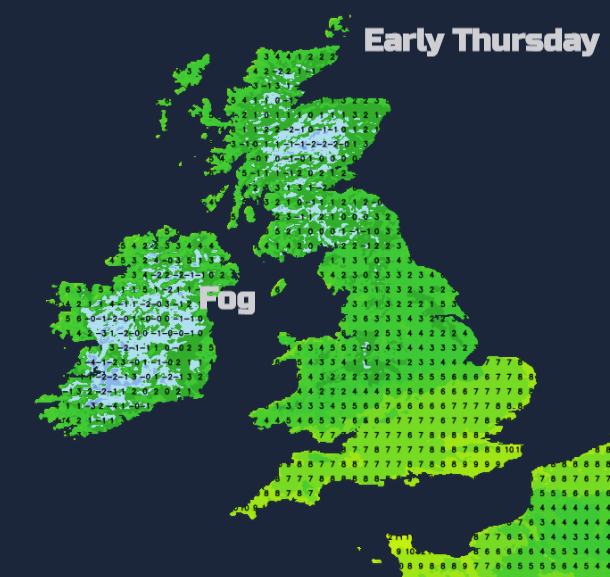 For Thursday morning and more so by Friday morning there will be fog. With temperatures around freezing and very light winds, there will be frost, the risk of freezing fog and dense fog in places. There is some uncertainty about the clearance of the mild air from the far south of England but overall, later this week looks chillier as you would expect for late November.